Fox News too liberal? Don't worry, One America News is here to help 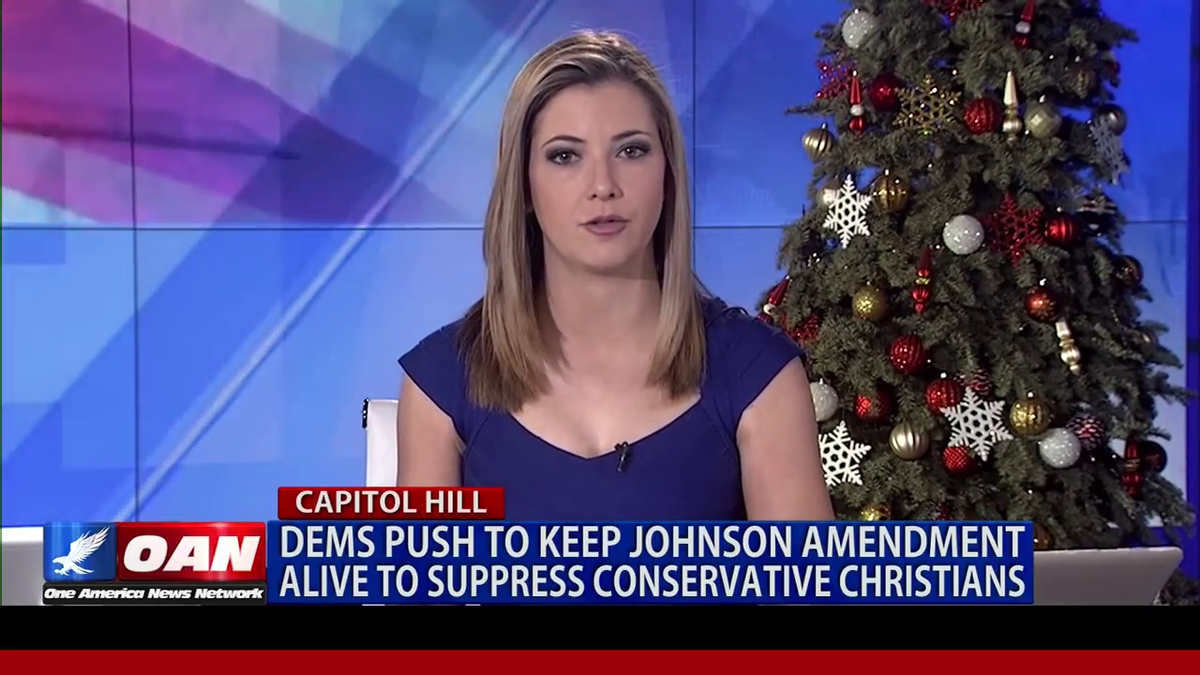 The emergence of Donald Trump as the Republican standard-bearer dramatically reshaped online conservative media in 2016 and continues to do so today. When Fox News Channel began to falter in the ratings after a series of sex scandals, leadership firings and lineup changes, it started to look as though a similar thing might happen within the realm of conservative TV.

Eventually, however, FNC caught its wind, rejiggered its schedule again and has returned to the top of the ratings heap, according to data published by the industry blog TVNewser.

As Fox News struggled with its identity amid the departure of its superstar Bill O'Reilly and founder Roger Ailes, an upstart rival called One America News Network tried to make the most of the bigger channel's misery, publicly dangling job offers to O'Reilly and other Fox personnel.

"We are getting a lot of request to hire Bill O'Reilly here at One America News Network," the company's CEO and founder Robert Herring tweeted on April 21, two days after the former Fox News stalwart was shown the door after a series of explosive allegations about his workplace conduct toward women.

O'Reilly and his agent took up Herring on his offer to talk, but negotiations ended in June. Herring claimed it was because O'Reilly took too long to make a decision, even though the anchor supposedly stood to make more at the fledgling network.

The O'Reilly flirtations were the latest in a series of attempts by Herring and his staff to become part of Republican voters' media diet. It's been a difficult task, particularly given how difficult it is for new channels to get distribution through the various cable and satellite companies across the country. As it is, residents in several states, including Arizona, Arkansas, Colorado, Idaho, Washington, West Virginia and Wyoming, cannot tune in to One America unless they subscribe to DirecTV.

To compensate for its lack of star power and viewership, One America has sought to outdo Fox News in loyalty to Republican political figures. This was not always the case. Originally, the premise behind OAN (or OANN, the network has never been clear on its preferred acronym) was that it would be a channel completely free of opinion — a headline service for people somehow incapable of using the internet. That initial approach garnered praise from the New York Daily News and the Huffington Post.

The larger direction of OAN was still evident, however, thanks to hyper-patriotic graphics and a two-hour primetime bloc that has always featured stridently conservative commentary. Given how difficult it seems to be for center-right media outlets to exist within today's news market, it is unsurprising that the channel ended up moving to the ideological position its commentators had always occupied.

The startup took another page from the Fox News banner with many extremely young female hires of a certain look.

"They don't respect women over there," said one person familiar with OAN's hiring practices. "They'll only hire women if they are bikini models."

The channel gave credence to that argument in August 2014 when it hired Tomi Lahren, a 22-year-old who has publicly stated that "sitting down with a book is very difficult for me." She had applied to be an intern.

“My jaw dropped. I was stunned. I just wanted an internship. He gave me a show,” Lahren told her hometown newspaper as she described her interview session with Herring. While her bombastic rants against Black Lives Matter and other left-wingers raised awareness for the channel, Lahren soon left for TheBlaze, Glenn Beck's would-be Fox News competitor. She eventually made it to the big leagues when Fox hired her this past August.

OAN did not respond to a request for comment for this story.

Herring didn't skip a beat with Lahren's departure, seemingly deciding to remake the channel in the image of Donald Trump as the real estate billionaire soared to the top of the Republican presidential primary polls in 2015. OAN became the first cable news channel to air the rookie politician's speeches in their entirety. According to emails obtained by Washington Post senior editor Marc Fisher, Herring and other higher-ups told staffers not to give the same treatment to other GOP candidates.

"We should ALWAYS take the trump speeches live in their entirety," Executive Producer Lindsay Oakley wrote in an email message to producers, that Fisher obtained.

The decision seems to have been motivated both by ideology and money. Fox News chairman Roger Ailes opposed Trump's candidacy in its early months, and much of his network's coverage reflected it. Ailes' reluctance was an opening for Herring.

"Trump is being treated unfairly by the mainstream media and we need to provide the other side," Oakley wrote later in her message. "Not to mention we have loyal viewers that tune in specifically to see the Trump speeches live because no one else carries them. We also see some of our highest ratings during the Trump speeches."

Since his electoral victory, OAN has kept up its worshipful coverage of Trump. It even hired his former campaign manager, Corey Lewandowski, as a commentator for a short while. The president and his communications staff have reciprocated, frequently calling on the channel's correspondents during White House press briefings.

The network has also been a staunch defender of the president from accusations that he benefited from Russian assistance during his campaign, once dangling an offer of $100,000 to promote a conspiracy theory about the murder of former Democratic National Committee staffer Seth Rich.

Once Fox had flipped back to Trump, however, OAN no longer had a distinct market proposition. That changed this fall after former Alabama Supreme Court judge Roy Moore faced a number of allegations of sexual assault and harassment during his U.S. Senate campaign.

"Mr. President, go ahead and back @MooreSenate with confidence," he wrote on Twitter on Nov. 22. "Our country needs a man like him."

Herring made his calculation public two days later. "OAN is getting a lot of mail...90% favorable to @MooreSenate," he tweeted.

It was 2015 all over again. Herring told his social media followers that he would broadcast Moore's speeches, just as he had done with Trump.

"One America News will be airing all @MooreSenate speeches that we can," he wrote. "The people of Ala. can make their decision off the facts they see and hear."

Herring ordered his employees to openly support Moore's candidacy on the air as well.

"We here at One America News want to say thank you to Alabama for standing up for what you believe in and we urge you to get out there and vote on December 12. We also believe that Sean Hannity owes Moore an apology for not standing by the judge," an OAN anchor pronounced Nov. 26.

The network went well beyond airing Moore's speeches, however. It eagerly repeated several conspiracy theories floated by self-proclaimed "hand-writing experts" and an anonymous woman who says she is a "body language" expert.

According to Laura Keiter of the progressive media watchdog group Media Matters, the Alabama Senate election marked a tipping point where OAN crossed over into the sort of fare regularly peddled by outlandish radio host Alex Jones.

"OAN is a lot like the child of Fox News and Alex Jones — its programming looks a lot like Fox News and sounds a lot like Alex Jones," Keiter told Salon. "For at least a year now, the programing on OAN — which has a strong history of shilling for Donald Trump — has been a bizarre combination of far-right propaganda and seemingly innocuous local and international stories that OAN rips off from other outlets."

Herring took his devotion to Moore even further when he directed his staff to call the Dec. 12 election for the Christian nationalist former judge, even before the Alabama polls had closed.

"The president of One America News, Robert Herring, would like to congratulate Moore on the fine campaign that he and his wife have run," an unidentified anchor can be heard saying in the clip below.

After it became clear that Moore had in fact lost the election to Democratic rival Doug Jones, OAN removed its video and article glorying in Moore's supposed victory.

Not very many people are tuning in to get their news from OAN, but it is developing a small but devoted following among die-hard conservative political junkies who are unlikely to read media-industry articles such as this one. If you have a Fox News- and Breitbart-addicted relative in your family, chances are you might be regaled with tales of the greatness of OAN this holiday season.

You may even hear about OAN's glowing coverage of Moore's refusal to concede, a week after his defeat, and its promotion of a bevy of unsupported theories about "multiple voting irregularities."

It's not clear how large OAN's target market is. But certainly Sandy Rios, a Christian supremacist radio host spoke for many when she complained to her audience about Fox News' coverage of the Alabama race. According to Rios, the right-leaning network was glad to see Moore lose.

"I think they're happy about that," she said during her Dec. 13 program.

"The accusations were overblown and Fox never sorted that out so they didn't have his back," Rios claimed. "Fox was eager to declare [for] Doug Jones."