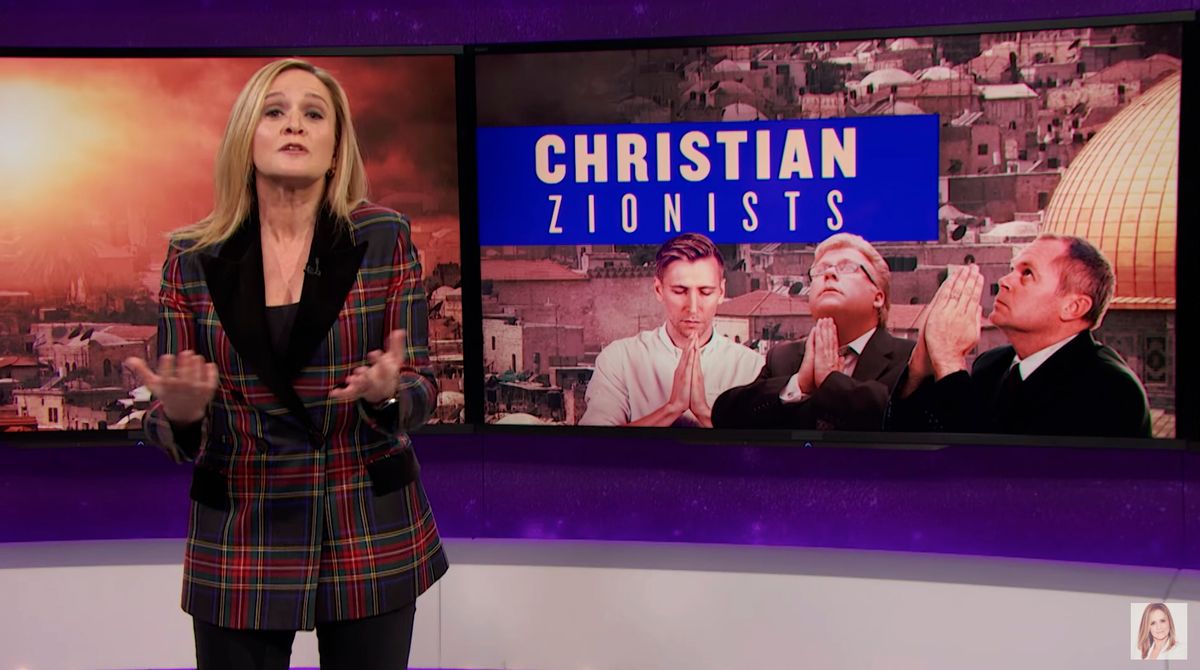 On Samantha Bee's "Full Frontal" Wednesday night, the late-night comedian examined the close-knit relationship between devout evangelicals and the less-than-devout leader of the free world, President Donald Trump. Specifically, she focused on how evangelicals' unconditional worship of him may have influenced his decisions, such as recognizing Jerusalem as the capital of Israel. Certainly, she says, millennialist strains of the movement are loving it.

Bee rolled a clip of Steve Cioccolanti, the leader of Discover Ministries, who is among evangelicals that believe Trump "has truly signaled the end times."

"You heard them right, this bunch of fringe-dwelling internet lunatics think that Trump’s gambit might hasten the end of the world, and they are into it!" Bee said. "Christian-fundamentalist predictions about the end times seem like a movie that's got the violence of Quentin Tarantino, belief system of Mel Gibson and unhinged intensity of the fourth hour of the 'Today' show."

Bee described the movement behind groups such as Discover Ministries and Christians United for Israel, churches that believe the American recognition of Jerusalem as Israel's capital fulfills their apocalyptic prophecies, as an "Aryan death cult."

"This is a prophecy alert," Paul Begley, an Indiana pastor, said in another clip.

"They believe that Israel needs to be united and Jewish so Jews can rebuild their holy temple in Jerusalem at the Temple Mount," Bee explained.

She added sarcastically, "Since this site is currently in disputed territory and has a 1,000-year-old mosque on it, this requires nudging some Palestinians out of the way. So essentially, Christian fundamentalists want to get rid of Muslims so that Jews can form a human target for the anti-Christ and the world can end."

"In my church," Bee said, "we all just said 'peace be with you' and went home and ate sandwiches!"

She added that "these specific crazies" don't necessarily have much influence over the president, but then introduced pastor John Hagee, of Christians United for Israel, who said he told Trump to move the embassy to Jerusalem.

"This is the year to move the embassy and make that declaration, because it is a biblical timing of absolute precision," Hagee said he told Trump in a conversation.

Bee joked, "Of course Armageddon is the one thing that Trump happens to get done with absolute precision."