Scott Garrett, a former Freedom Caucus member and Pence ally, gets bounced in a major smackdown to White House 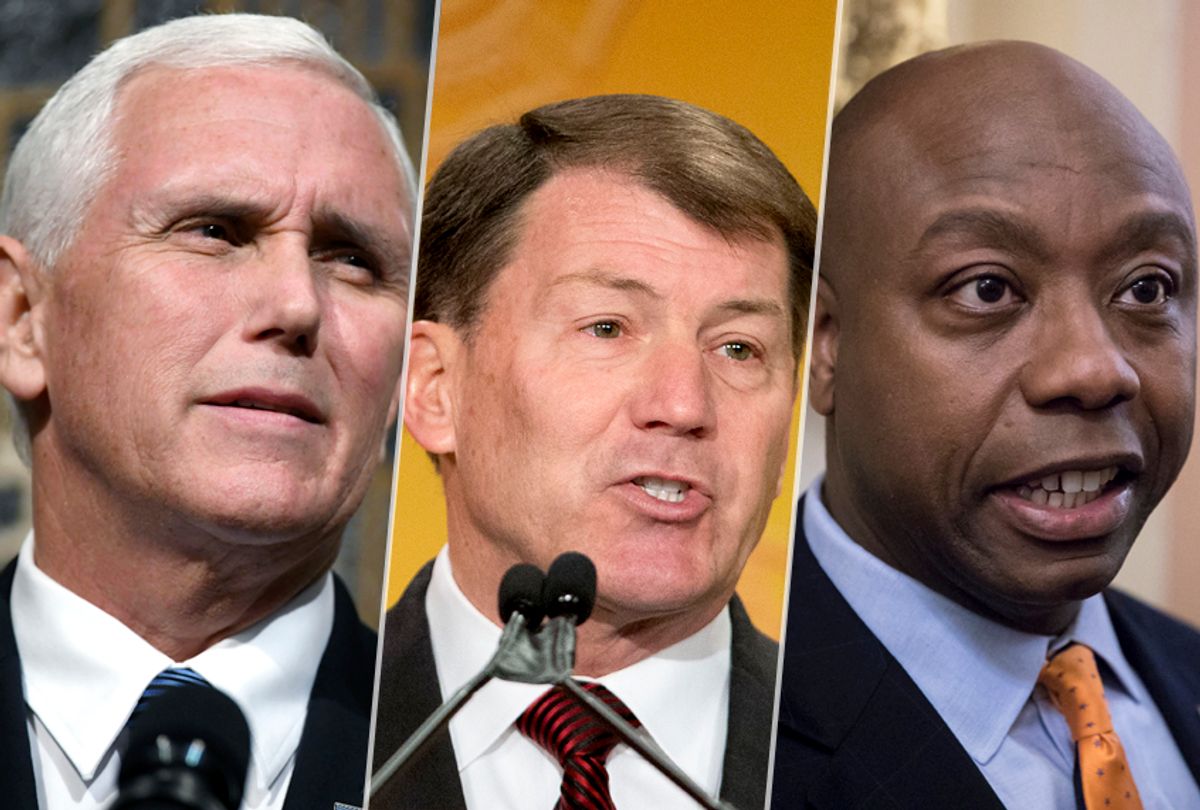 President Donald Trump may be loudly celebrating the passage of his first major piece of legislation just before the year-end cutoff, but his administration also quietly suffered a stinging setback at the hands of his own party this week  — helping to serve as a reminder that in this era of one-party control, Republicans are often the White House’s biggest obstacle to success.

In typical Trump fashion, the president nominated someone to run an agency who opposes everything it stands for. (Other obvious examples include Scott Pruitt as head of the Environmental Protection Agency, Rick Perry at the Department of Energy and Mick Mulvaney as interim chair of the Consumer Financial Protection Bureau.)

Garrett, a former Republican congressman who represented a New Jersey district from 2003 until his defeat last year, has argued that government should not be in the business of helping private companies. A founding member of the House Freedom Caucus, Garrett would have waged an ideological crusade to weaken the agency from within. The Tea Party-aligned Republican has described the agency in the past as “a bank that embodies the corruption of the free market” and an example of the “crony capitalism [that] distorts the market to help some of America’s biggest companies." Garrett led a group of House conservatives in an aggressive, years-long campaign to close down the bank and, as a member of the House Financial Services Committee, voted twice against bills to reauthorize it.

Founded in 1934, the bank provides aid and insurance to help foreign buyers purchase U.S. exports at lower interest rates than they would get from a private bank. The aid is key for projects in developing nations, which often require government-backed financing and are turned down by private banks.

Businesses with fewer than 500 workers account for 97.6 percent of all exporters and 97.2 percent of all importers in the U.S., according to the Census Bureau. But the Export-Import Bank finances less than 5 percent of all exports annually, with 86 percent of its deals being worth more than $10 million. Its biggest beneficiary is Boeing, despite the airline manufacturer’s market cap of nearly $177 billion.

If the bank scales back or stops operating, Boeing's largest competitor, European-owned Airbus, would presumably benefit. The Trump administration hired a lobbying firm that has been paid $1.5 million by Airbus since 2011 to help Garrett get through the confirmation process, according to records kept by OpenSecrets.org. An Indiana native who has a long relationship with Vice President Mike Pence was assigned by the lobbying group to coach Garrett through his confirmation process. As Politico has pointed out, “Pence [has] remained a steadfast backer of Garrett.”

Garrett and Pence served together in the House and are said to share similar worldviews. In Senate testimony last month, Garrett thanked Pence for “taking the time to have been as supportive as he has been of my nomination.”

Marc Short, who was Pence’s chief of staff on the Republican conference in the House, and then ran the Koch-funded Freedom Partners, helped shepherd Garrett’s failed nomination as director of legislative affairs for the White House.

“We are disappointed that the Senate Banking Committee missed this opportunity to get the Export Import Bank fully functioning again. We will continue to work with the Committee on a path forward,” Short said in a statement.

While the Export-Import Bank was once backed by large majorities in both parties, the current controversy over its status highlights deep divisions in the Republican Party. The far right and the Koch brothers want to kill the bank. (Some on the left don't like it either; Sen. Bernie Sanders, I-Vt., decried the bank in 2015 as "corporate welfare.") Conservatives have opposed filling the bank’s board, which is necessary for the approval of deals above $10 million, for the past several years. The last year the bank was fully operational was 2014.

Under former chair Sen. Richard Shelby, R-Ala., the Senate Banking Committee refused to consider former President Obama’s nominees for the bank's five-member board. According to the bank, it has $37.5 billion in pending transactions that are stalled. Those deals were projected to produce a $492 million surplus that would be returned to the U.S. Treasury.

President Trump previously opposed the bank while on the campaign trail, calling it the "bank of Boeing,” before softening his stance.

“It turns out that, first of all, lots of small companies will really be helped, the vendor companies," Trump said in an April interview with The Wall Street Journal, noting that other countries provided similar aid. "So instinctively, you would say it’s a ridiculous thing, but actually, it’s a very good thing and it actually makes money,” the president said.

During his confirmation hearing, Garrett dropped his hard-line conservative stance to echo Trump, stating that he would let the bank “continue to fully operate.” He did not, however, apologize for his previous opposition.

“I believe that you truly believe the statements that you made," Sen Rounds said to Garrett during the latter's November testimony. "What would have made you change your mind about whether or not the Export-Import Bank should exist?” When Garrett referred lawmakers back to his prepared testimony, Rounds replied: “I think this is critical that you be able to share what has changed your mind.”

The panel’s top Democrat, Sen. Sherrod Brown of Ohio, said that confirming Garrett to lead the bank would be like "putting an arsonist in charge of the fire department." Despite intense lobbying from the Koch-backed Freedom Partners and Club for Growth, enough Republican senators agreed with Brown to torpedo Trump's nominee on Tuesday.

The National Association of Manufacturers had targeted Sens. Scott and Rounds with a digital ad campaign in support of the bank and against Garrett’s nomination. South Carolina, Scott's state, is home to a Boeing plant that manufactures 787 Dreamliners and employs 6,800 people.

Supporters of the Export-Import Bank point out that when the bank provides financing to Boeing to support export sales of its aircraft, Boeing funnels billions of dollars in business to more than 13,400 small and mid-size suppliers and vendors across the country, supporting 1.3 million American jobs.

Still, the GOP proxy war over the Export-Import Bank is far from over. Koch-aligned Sen. Pat Toomey, R-Pa., has vowed to do everything he can "to prevent Ex-Im from getting a quorum” in the wake of Garrett’s failed nomination.