GOP tax bill: Winner or loser? Politically, it might not make much difference

Both parties think the GOP tax bill is a golden ticket to victory in 2018. What if they're both wrong? 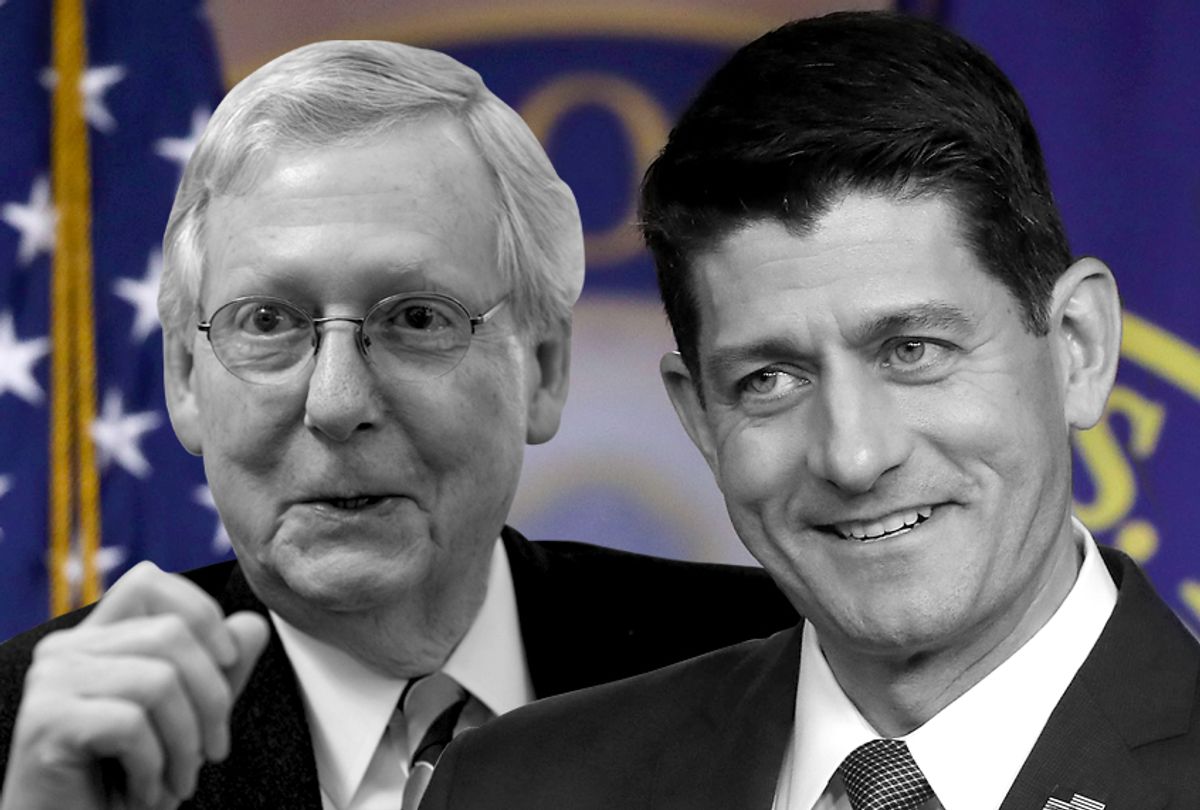 After months of frustration, congressional Republicans finally passed a large piece of legislation on Wednesday, a massive tax overhaul that raises rates in some areas but cuts them overall by about $1.5 trillion, according to official government estimates.

While the nation awaits the formality of President Donald Trump putting his signature on the final bill, both parties are claiming that the Tax Cuts and Jobs Act will help them toward electoral victories in 2018.

Democrats are pointing to the tax plan’s overwhelming unpopularity — 41 percent of respondents in a recent Wall Street Journal poll said they thought the bill was a “bad idea” — as a harbinger of how it will help them in congressional elections next year.

Republicans, meanwhile, are claiming that while their bill is not widely supported right now, it will become popular once the tax cuts begin kicking in. There’s some irony to this argument: It's highly similar to then-Speaker Nancy Pelosi’s 2010 remarks about the Affordable Care Act. Republicans spent years recycling her comment that “we have to pass the bill so that you can find out what is in it,” but now they seem to be repeating its sentiment.

Nonetheless, GOP operatives and politicians insisting that once the tax cuts eventually kick in for most Americans, the bill will gain public support.

"They're going to start seeing the results in February. This bill means more take-home pay. It will be an incredible Christmas gift for hard-working Americans," Trump said during a Wednesday public event with congressional GOP members. "I said I wanted to have it done before Christmas. We got it done."

He is far from the only Republican claiming lower taxes will help the party escape the electoral bloodbath it may be facing next November.

“There’s no faking it. You know what you paid in taxes this year. You will know next year whether it’s going up or going down. And that should be something that every Republican is excited about,” Corry Bliss, the executive director of American Action Network, told the Washington Post’s James Hohmann on Wednesday.

Bliss’ group is one of several well-financed conservative organization that have run millions of dollars in television ads touting the GOP tax plan for several weeks. Wealthy right-leaning donors appear to be one group that's highly enthusiastic about the bill.

Tim Phillips, the leader of the Koch-backed Americans for Prosperity, also claimed in an interview with Hohmann that the Trump tax plan would become increasingly popular, just like former President Ronald Reagan’s 1981 tax reform did.

“The Reagan 1981 tax cuts did not enjoy broad support when they were first passed into law,” he said. “It took time for people to see the change was good for them."

In fact, however, the Reagan tax plan was significantly more popular than the one the GOP just passed. Two polls taken in February and April of 1981 found that 71 percent of respondents favored Reagan’s proposals.

Still, it's true that most taxpayers will likely be paying less in taxes under the new law, at least in the short term. Even left-leaning policy analysis groups have admitted that the vast majority of American households will have smaller tax bills, at least until 2025 when the Republican plan raises individual rates to comply with Senate budgetary rules.

Responding to this point, some Democrats have pointed out that while most people will enjoy some sort of tax savings, the amount they will receive will be too small to make much difference. In a 2010 poll sponsored by the New York Times, just 12 percent of respondents thought that they had received a tax cut under President Barack Obama. In fact, almost every household in the country had done so, but it was only in the amount of $500 for adults and $1,000 for married couples. According to the Tax Policy Center analysis linked above, the average household this time around will receive only slightly more, about $1,600.

While Democrats’ arguments that voters aren’t likely to be swayed by relatively small tax breaks are persuasive, their claims that the Trump tax cut is sure to become an electoral albatross because of its unequal distribution are less so.

The GOP tax bill has long been unpopular, but progressive groups have so far been unable to rekindle the level of public outrage that existed during the repeated Republican efforts to repeal the Affordable Care Act. This fact was illustrated on Monday when MSNBC reporter Garret Haake noted that a Democratic effort to organize a demonstration against the tax bill completely fizzled.

“These protests have never been like what we saw with the health care law,” Haake noted as he stood outside a room where the rally was supposed to happen.

“This particular protest was supposed to start at 3, supposed to feature Nancy Pelosi, and supposed to have hundreds of people. And none of those things are going to end up being true,” he added.

Public opinion polls during former President Barack Obama’s 2014 effort to spread awareness of income inequality showed comparatively little interest in the subject. In a survey commissioned in January of that year by NBC and the Wall Street Journal, just 37 percent of respondents said they wanted the government to do more about the matter. In separate surveys conducted in 2015 by Gallup and CBS, the percentage of respondents who said that income inequality was the most important issue facing the country was less than 5 percent. This suggests that Democrats who seek to make the unequal distribution of the Trump tax cuts a centerpiece of their 2018 strategy are likely to be disappointed, especially since they won't have a charismatic presidential candidate like Sen. Bernie Sanders to boost the message to an easily distracted public.

While both parties want to believe that public perception of the Trump tax plan will work in their favor, it is more than likely that the president himself will be the much bigger factor in 2018 than anything else. In our increasingly tribal politics, the plan is likely to become more popular among Republican voters -- who will see it as evidence that Trump is fulfilling his promises -- while also motivating Democrats to show up at the polls and deliver a stern message.