GOP's new hunt for "Crooked Hillary": A last-ditch gamble to save Trump?

Jeff Sessions, Devin Nunes and Rand Paul are all on the Clinton case: So far only the right-wing media is buying 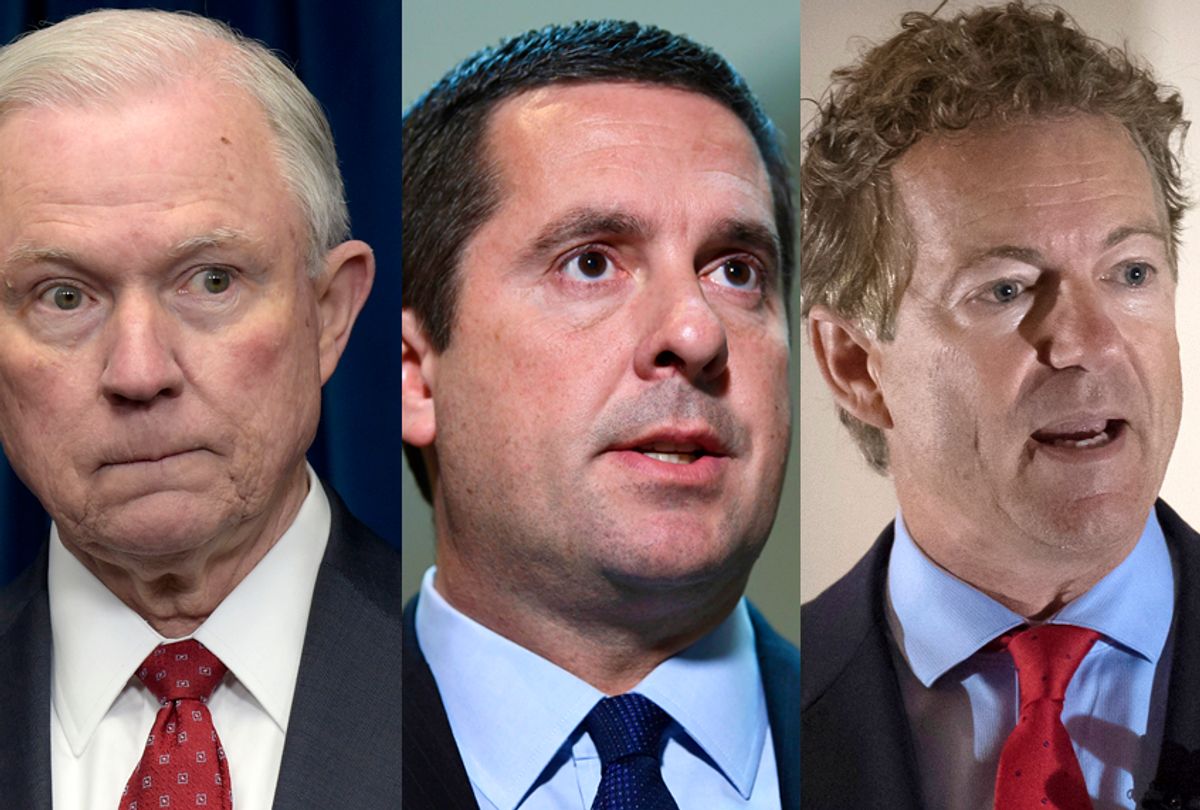 One of the more disturbing comments President Trump has made in recent months, and that's saying something, is what he said last month to radio talk show host Larry O'Connor in the wake of the indictments of Paul Manafort and others.

He continued with a rather stilted explanation that he as president couldn't be involved but that he "hoped" someone was looking into it. Later that same day, he spoke to the press as he prepared to leave for his Asia trip:

There was something about the way he said it that was . . . off. It seemed practiced. Indeed, he had started out the morning with this tweet, as if he had decided this would his theme for the day:

Trump has been using "Crooked Hillary" as a foil for almost two years now, and it remains true that his crowds are still weirdly stimulated and aroused at the mere mention of putting her in prison. But this was the first time that Trump had said something as president that suggested a serious intention to follow through, if only he were allowed to direct the Justice Department and the FBI to do his bidding. MSNBC's Ari Melber noted at the time that Trump was "doing in public what Nixon would only do in secret. He is openly musing about pushing the DOJ to investigate or prosecute political opponents."

That's how it appeared to me too. Trump had already gotten himself in trouble when he personally asked former FBI Director James Comey to go easy on his buddy Michael Flynn, so he had learned the hard way that presidents are not supposed to be "involved" with the Justice Department. Thinking he was being clever, he just said publicly what he wanted to be done, as if he were speaking off the cuff.

Why he would want to pursue Hillary Clinton after all this time is obvious. He wants to muddy the waters with a parallel investigation into the hated Hillary and discredit special counsel Robert Mueller's probe into the Russia scandal by any means necessary. His loyalists had been casting about for the best way to fight back and settled on a sort of mirror conspiracy theory: While others accuse Trump of conspiring with the Russian government to tilt the 2016 election in his favor, they accuse Clinton of conspiring with the FBI and the Justice Department to steal the election from Trump.

It's crazy, but that's what they're going with. Over the past week, this has ramped up from a number of different directions. On Thursday, NBC News reported that Attorney General Jeff Sessions directed DOJ prosecutors to "ask FBI agents to explain the evidence they found in a now-dormant criminal investigation into a controversial uranium deal that critics have linked to Bill and Hillary Clinton.” This is, of course, the debunked story from the book "Clinton Cash," cranked out by Steve Bannon's phony Government Accountability Institute.

Sessions had promised the Senate that he would recuse himself from all decisions about the Clinton emails and the Clinton Foundation, because of his criticisms of her during the campaign. Apparently he didn't mean it. White House Press Secretary Sarah Huckabee Sanders insisted on Thursday that the president didn't "direct" Sessions to investigate the uranium deal, but then, he didn't need to. He'd already made it clear what he wanted done.

Sessions' recusal was as worthless as the one House Intelligence Committee chair Rep. Devin Nunes, R-Calif., promised after he was caught sneaking around in the middle of the night hatching plots with the White House last spring, when he was supposed to be conducting an impartial investigation. Now Politico has reported that Nunes and a handful of fellow Trump disciples on the committee have been conducting a secret investigation, without informing their Democratic colleagues, that sounds an awful lot like what the president "mused" about in those comments back in November:

The people familiar with Nunes' plans said the goal is to highlight what some committee Republicans see as corruption and conspiracy in the upper ranks of federal law enforcement. . . . The sources familiar with the separate inquiry said it was born out of steadily building frustration with the Justice Department's refusal to share details of the way the Trump dossier was used to launch the FBI's investigation of his campaign team last year.

Senators are getting in on the act as well. Senate Judiciary Committee chair Chuck Grassley, R-Iowa, wants Deputy FBI Director Andrew McCabe fired because his wife is a Democrat and he's suspected of having been hostile to Trump during the election (which apparently translates into him covering up Hillary Clinton's crimes). Meanwhile, Sen. Rand Paul, R-Ky., has become downright hysterical:

But for all this bluster from Trump's increasingly sycophantic congressional supporters, if this plan is to work he has to persuade a majority of the public that he's more honest than Robert Mueller, the FBI and the Department of Justice. That part's not looking good. CNN released some polling on public attitudes about the Russia investigation on Thursday and this result is astonishing:

[The] things Donald Trump has said publicly about the investigation into Russian interference in the 2016 election have been ...

Only 8 percent of the American people believe that their president has been completely truthful about an investigation into whether he colluded with a foreign government to win the election. One imagines Mueller isn't losing sleep worrying about about his reputation being tarnished by someone with a credibility gap of that magnitude. Trump's the one who's looking tired these days.