Best essays of 2017: Please stop breaking up with my girlfriend

I was the one who wanted an open relationship. So why was I so upset when she and my roommate became involved? 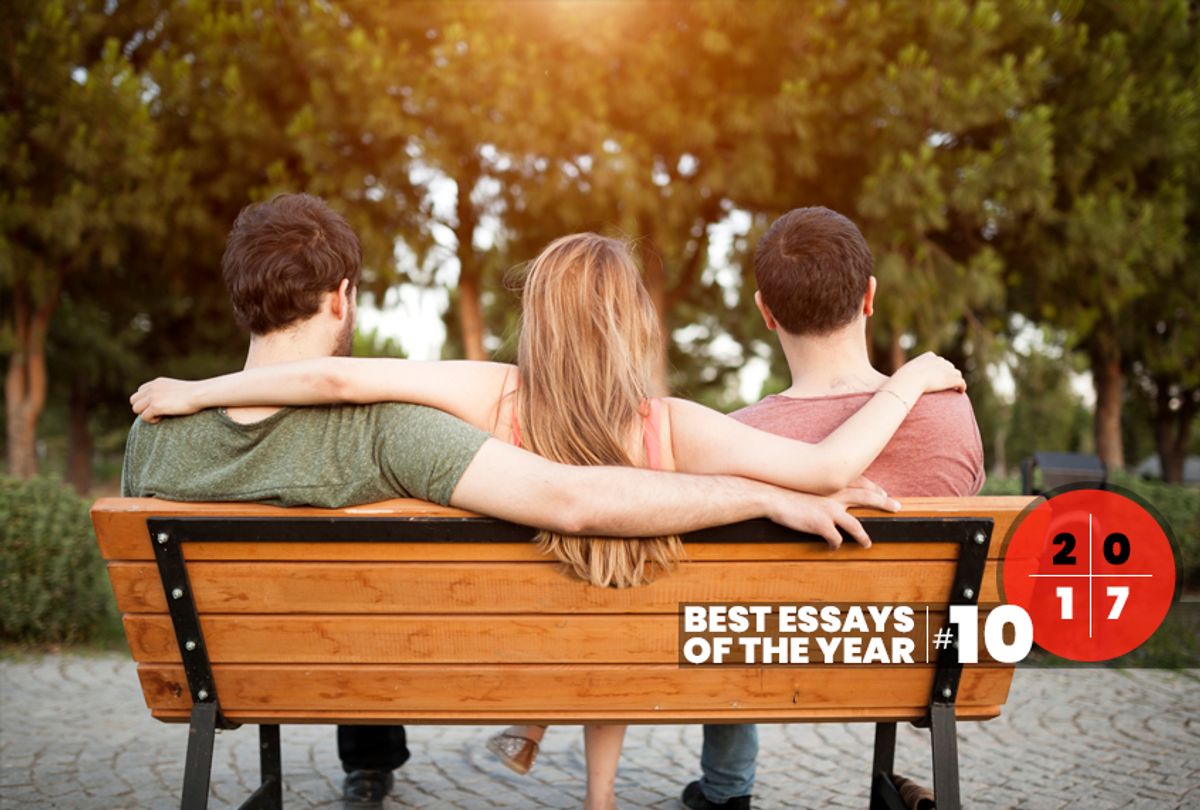 We're re-running this story as part of a countdown of the year's best personal essays. Read all the entries in the series.

Looking up from my drink and across the room, I watched my girlfriend and my roommate kiss for the first time.

It was her 21st birthday, five days into the spring of our junior year. Heads swiveled toward Elizabeth and Jamie as their kiss deepened. Quiet rippled out through the din of the party. In the background, Beyoncé continued to serenade us with “Drunk in Love.”

Jealousy welled up in me: I was the one who wanted an open relationship, not Elizabeth.

Crushes have always sprouted in me, independent of my will, like I live in an endless springtime. One blossoms for someone who feels right in my arms at a blues dance, another bursts for a classmate who writes achingly beautiful poetry — all the time, people pop up and make me dizzy.

Several months before, I’d confessed this desire to her. “I want to give that to you,” she whispered — but the idea made her seethe with anxiety. Our time together was already a constant negotiation. She had to micromanage her schedule to balance a Mathematics major with ADHD, while my distaste for clocks and Google Calendar verged on phobia. We lived in glimpses and embraces between class; love slipped into the little spaces we had left over. She feared we’d have no time left at all if we were entangled with other people.

So as her mouth moved against Jamie’s in one of the loveliest kisses I’d ever seen, I felt a lot of things. Jealousy, yes, at the bitter irony that she had what I wanted. Confusion: Had she changed her mind, or was this just a drunken birthday kiss? Happiness, too — what some polyamorous people call “compersion” — that two people I loved were sharing this intimacy. And also a little private hope: that Elizabeth would understand me better now. Under my breath, I whispered, “Finally.”

As the night progressed, time warped around Jamie and Elizabeth’s kiss. It never stopped. I got drunker than I’d ever been. For the first time, I spent my night retching into a toilet. Elizabeth, after holding my hair, spent her first night in Jamie’s bed.

There was no privacy in our room; closeness was the way of our student-housing cooperative. The stairwells resounded with mandolin music. The walls of the gender-neutral shower room were sheened with orange grime. Nobody locked their doors, ever.

The third time I walked in on Jamie and Elizabeth kissing, we decided it was time to talk about it.

We spoke for hours. Softly, carefully. Elizabeth held my gaze. Jamie averted it. “We need each other,” Elizabeth confessed.

They glanced at each other. “Okay? Really?”

“I never want to keep you from what you need,” I said. “Need is sacred.”

Maybe they didn’t. Jamie hadn’t yet told Sophie, their long-distance high school sweetheart and maybe-someday-fiancée, about kissing Elizabeth. “She’ll definitely be okay with it,” Jamie assured us.

I had my doubts that Sophie — who rarely used gender-neutral pronouns for Jamie and wanted them to be her husband, not her androgynous partner — would be a fan of polyamory.

But Elizabeth was beaming at me, moon-eyed. “I feel a hundred times lighter right now,” she said, “than I can remember having felt in I-don’t-know-how-many-months.”

We weren’t sure how we’d make it work, but we knew we’d figure it out. We had to. At dusk we walked to a campus café through swirling snow, arm-in-arm and arm-in-arm, giddy with laughter, embarking on this strange journey together.

The walk sticks out in my memory, because I think it was the last time all three of us were happy at once.

Later that night, Jamie called Sophie. Sure enough, they returned to the room and murmured, almost inaudibly, “This can’t happen anymore.”

But it kept happening.

Maybe I should’ve told Jamie and Elizabeth to stop. But watching them fall in love felt like falling in love myself. I liked when Jamie, half-asleep, would murmur, “I’m crazy about her,” and I would reply, “Right?!” I liked how Elizabeth told me little secrets and snippets of dialogue — and I liked the mystery of what she’d keep to herself. I liked waking up curled against her some mornings, and on others watching her stretch from Jamie’s bed, and waving to her.

But I hated how, wracked with guilt after Skyping with Sophie, Jamie would wrench themself away from Elizabeth.

It was a vicious cycle. Jamie couldn’t kiss Elizabeth without confessing the infidelity to Sophie, who insisted that this couldn’t continue. Jamie couldn’t help but agree and tell Elizabeth they had to break it off. Which left me stroking Elizabeth’s hair through the night as she wept and pined for all of the things they couldn’t do. Next week, they would find themselves alone together, and the cycle would begin again.

Jamie’s cheating sucked. I was complicit in it. But I felt Jamie deserved to be with someone who fully embraced their gender. Someone like Elizabeth.

So I began to root for my roommate to break up with the woman they planned to marry so they could stop breaking up with my girlfriend. For all our sakes.

Selfishly, what I liked most about our situation was clear proof that Elizabeth and I needed an open relationship. I liked trusting each other that much. I’d lost the guilt I felt when I held someone else’s eye contact in the library, or their hand on a walk, or their name in my mouth at night.

Until, that is, Elizabeth voiced her continued doubts about “outsiders” interfering in our relationship. People we both already knew and loved, like Jamie, were one thing. But interweaving the fickle needs of strangers into our life patterns? Weren’t we having enough trouble untangling the mess we were in already?

By mid-March, we were all looking for distractions. Elizabeth chose math. Jamie chose drugs. I decided to scrub every inch of mold from the co-op shower walls. Without a mask. The ensuing asthma attack landed me briefly in the hospital. After I was discharged, every time I stepped into our co-op, I felt my lungs seize up. I exiled myself for a week, sleeping alone in Elizabeth’s room across campus, while she and Jamie continued living in “our” room.

I lay alone in my girlfriend’s bed.

Without me there as a buffer, the tides of their relationship rose higher and broke harder. In panicked midnight walks and phone calls, Elizabeth insisted, “I can’t do this, Nick. I can’t. I’m not a polyamorous person.”

“But you’re in love with two people,” I protested.

To Elizabeth, polyamory was an experimental structure for our relationship — one that wasn’t working. To me, polyamory was, is, a matter of identity. To me, loving two people at once is… loving two people at once. Three is three, twelve is twelve, one is one. Nothing about love should exclude, or possess, or covet. To me, it’s Time that is the great divider, limiter, and dissector of what could otherwise be infinitely expansive love.

And I will never stop wishing for more time.

I finally grew truly jealous of Jamie, as Elizabeth’s time and energy was consumed with their presence or siphoned by their absence. Grew resentful of their perpetual indecision, of how they kept hurting both Elizabeth and Sophie, of how the state of my relationship with Elizabeth depended entirely on theirs. Jamie had, at their core, a great restless emptiness that I couldn’t comprehend. They tried to fill it with drugs, with lovers, with an endless string of hobbies and talents that they inevitably soured on. Nothing sated. In the past I’d been concerned about Jamie’s patterns, but it was their life. Now everything they did with their time impacted how I spent my own.

Everyone just wanted everyone to be happy, but nobody was allowed to be.

Toward the end of April, Jamie left Elizabeth for good. Finally swallowed by guilt, they told Elizabeth, “I don’t love you anymore. You’ve hurt me too much.”

“Elizabeth,” I murmured. “I don’t think you’re doing anything to them that they’re not already doing to themself.”

At the end of the semester, I helped Jamie move out. That morning I was wearing a thin, floral-patterned shirt that had mysteriously appeared on my pillow. I tossed the last suitcase into the trunk of Jamie’s car, and we hugged farewell. I turned to head back upstairs.

“Thank you, Nick,” Jamie said quietly, their eyes briefly meeting mine. “For everything.”

I smiled back at them. “No problem,” I lied.

Later, Elizabeth called. She wanted to kiss me goodbye before she, too, drove away for the summer. I excused myself from my meeting and walked quickly from the library. I was startled as air rushed past me — I was running. Asthma and all, I was sprinting. As I flew down an alley toward the street, I heard a car door slam and a loud, fast pair of feet approaching.

Elizabeth careened around the corner and into my arms. The air was thick with birdsong. We kissed, still breathing hard from running to each other. Then her hands tugged at my new shirt.

“Why are you wearing Jamie’s shirt?” she giggled.

“I found it on my pillow,” I said, cocking my head. “I wonder why Jamie didn’t say anything about it.”

Elizabeth closed her eyes. “I left it there by accident. I was wearing it last night.”

And we laughed the way we had at the beginning of the semester, walking through snowfall, when everything was untarnished. Nothing was healed, nothing was saved, nothing made sense — but we were laughing again.