Black women have our own version of the "cool girl" to make white people comfortable. That used to be me 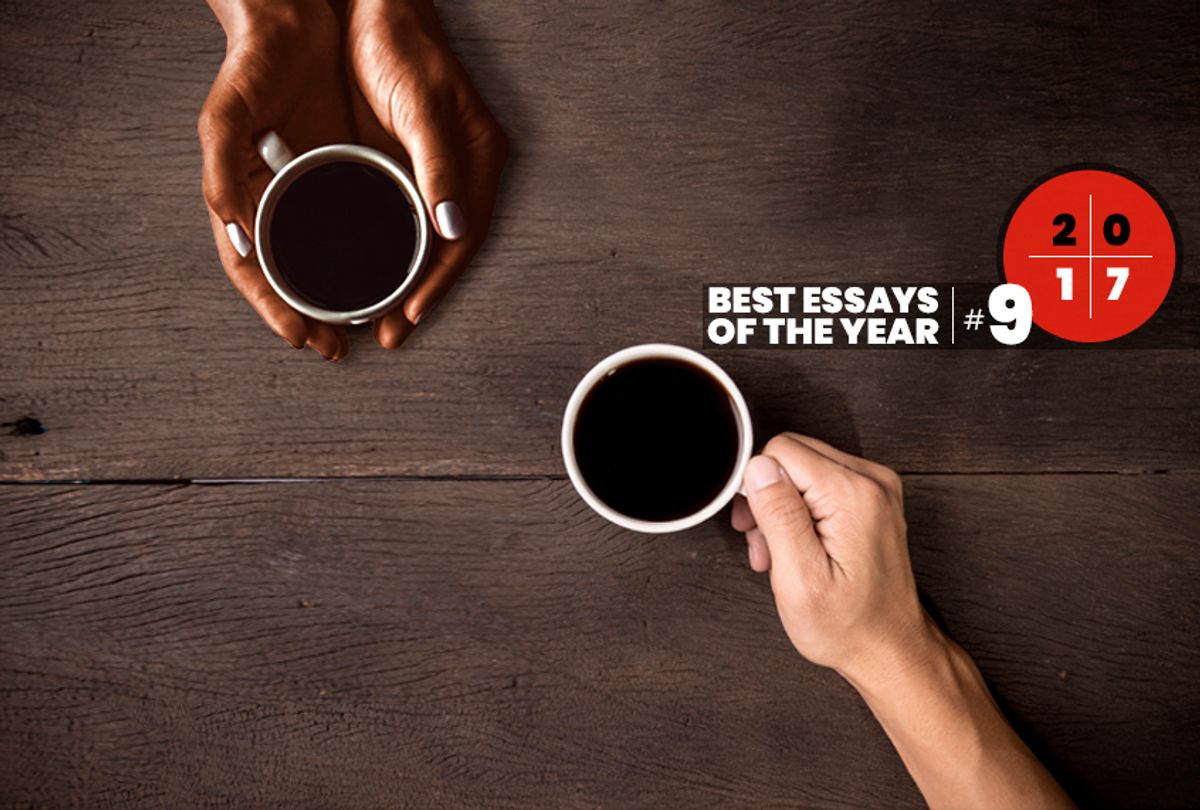 We're re-running this story as part of a countdown of the year's best personal essays. Read all the entries in the series.

“I have a tattoo of a Confederate flag,” my date tells me. I look up from my coffee in disbelief.

In his defense, he says it sheepishly, like he’s confessing something he knows he should be ashamed of.

In my defense, he says it at all like he’s asking for an absolution I should never grant.

I stutter, and he rushes on, assuring me he was from Texas and got it out of Texan pride, not any other association. I don’t ask why he didn’t just get a Texas flag tattoo.

He promises me that he has only used the “n-word” once in his life, when he was young, and his mother slapped him so hard he never used it again. I don’t ask if the fear of being slapped is still the only reason he doesn’t use it.

He prefers dating black women; he says this like it’s a compliment. I don’t ask if they prefer dating him, or if when they see his tattoo under his shirt they recoil.

A few years ago, Gillian Flynn popularized the concept of the “cool girl” in her novel "Gone Girl," where she explained the unrealistic social expectations that women were supposed to fit into in order to be desirable to men — one that required they embrace sports, unhealthy food and casual sex, abhor commitment and above all else conform to conventional standards of beauty.

Black girls have our own version of the cool girl. The cool black girl is urban but not hood. She’s down enough to use slang her white friends will want to poach, but won’t embarrass them by sounding too black. She’s willing to date white men, but is unbothered when they don’t want to date her. She’s unflinchingly patient and endlessly supportive of the white women around her. And above all else, she never — ever — makes a white person feel uncomfortable about race.

I used to be the coolest black girl.

Accusing someone of racism — particularly when that person is saying things that make them sound racist — is the cardinal sin for a cool black girl. So I dig deep into my cool black bag of tricks and bond with him over an obscure TV show. We laugh. It’s no longer awkward, at least not for him. It had already become incurably awkward for me, but that’s OK. Cool black girls are, after all, still black girls, which means we’re stronger than everyone else. We can take it.

He texts me after that date, and maybe it’s the expectation in that text that we would hang out again or the three texts that followed the first, showing he didn’t even suspect maybe I was ignoring him. As though there were no reason that I may reject him. Maybe it was just me.

I lose my cool.

“I don’t think I was clear enough — the tattoo for me was a dealbreaker. I take you at your word that the flag doesn’t mean anything racist to you. But that’s all it means to me,” I text back.

He is offended and shoots back that he can’t “believe [he] is being judged for something he did 20 years ago.”

“Well, then I’m sure it’s my loss,” I respond. I’m not sure he gets that I'm being sarcastic, and that makes me laugh.

It’s freeing to commit a cardinal sin and realize the punishment feels better than years of virtue ever had. For being the cool black girl, I had been rewarded with the Sisyphean task of making insecure white people feel better about race and the hollow satisfaction of investing in the comfort of people who clearly weren’t invested in my own. The penalty for failing to be the cool black girl was not having to be one.

It gets easier after that. I stop trying so hard to avoid offending people with suggestions they have offended me. I stop using racial self-deprecation to indulge “ironic” senses of humor. I stop laughing when it’s not funny or nodding when it doesn’t make sense. I stop playing the defendant when they want to play the devil’s advocate — allowing them to intellectually experiment on me with their worst arguments, leaving themselves unscathed and richer for the exercise and me, diminished. I stop making them feel better for making me feel worse.

I don’t become unrecognizable. I continue to forgive good faith missteps and let intentions count for a lot, even when they’re accompanied by inelegant wording. But the cool black girl is gone. She doesn’t leave all of a sudden, in a fit of rage. I don’t cut her out of pictures. We outgrow each other, and we both know it, too. It’s a conscious uncoupling. She takes the toaster, and I wish her well. She calls sometimes, but I don’t answer. I don’t miss her.

After Charlottesville, a friend asks if I believe everyone who marched to protect Confederate statues is racist. I think of my date and his tattoo and his indignation and my coffee. Had he been racist? Do I care?

My friend wonders if maybe it’s possible to bring some of those people to our side if they don’t feel so attacked.

I tell him I can’t bring myself to care about their feelings, and he is surprised by my reaction. He’s an old friend. I used to be cooler when he knew me well.

I believe in grace for people who are imperfect allies and generosity for those interested in learning but haven’t yet. But I no longer believe the comfort of white men is more precious than my own. They brought weapons. They clearly don’t mind if we feel attacked.

It’s not that I think allegiance to a Confederate flag or monument automatically makes someone racist. It’s that I don’t care whether they are or not. It’s a dealbreaker for me. Maybe that makes me cavalier — or cool. Maybe my friend is right, and some of them could be brought to our side if people like me invested energy in making them feel less judged and more welcome. But since I don't, they stay on their side.