All Donald Trump wants for Christmas

Now that he's won the War on Christmas, Trump has some tremendous demands 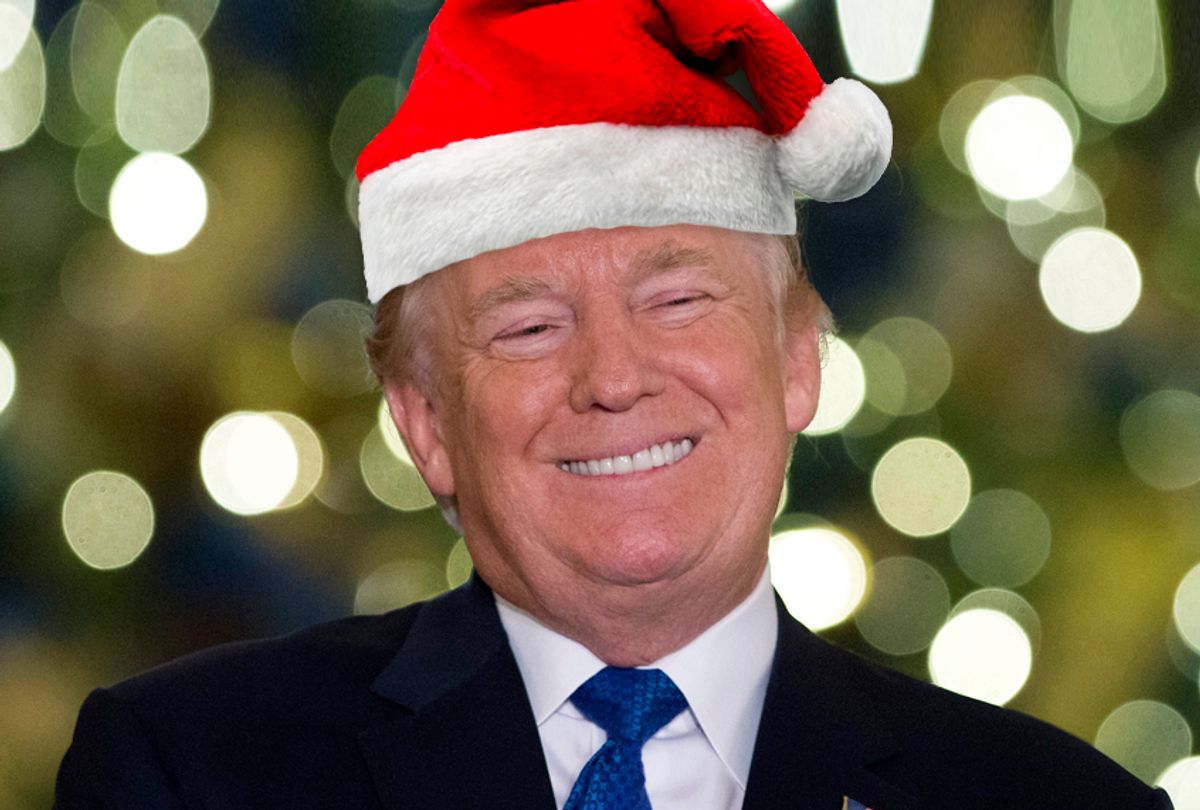 I was walking through Target, snatching up doll babies and action figures for an East Baltimore toy drive. It’s my favorite part of the holiday season, having the chance to help buy toys for children who may have not received any gifts. Everybody deserves to open up something during the holidays, right?

Like most people who aren’t clever enough to order online and just pick up their merchandise, I waited behind at least a dozen holiday shoppers in line to check out. The couple in front of me — two lanky 40-somethings — went on and on about Trump being the Grinch who stole Christmas. I didn’t butt into their conversation, but I disagree. Trump isn’t the Grinch, he's always happy — you can tell from his tweets, which he punctuates with exclamation points of joy. Plus, right now he’s high off the Republican Congress passing his tax bill, making him the greatest President ever, in his opinion.

And to prove this happiness to my fellow citizens, I’m going to share President Trump’s letter to Santa — or at least what I think it would say. (Read it in Trump Voice for desired effect.)

First, I’d like to say that you are very very tired, and really sad. I’ve been writing to you for over 65 years and you have yet to respond. This will be my last attempt until my next attempt.

Listed below are things I need, and what I deserve. I expect to receive everything in a timely manner.

The Wall. I’d like a beautiful wall, a strong tall wall seasoned with the best, only the best, anti-MS-13 repellent. Please make Mexico pay for it.

For Donald Jr., a “No Snitching” tattoo across his chest. Please don’t let my namesake, who has a very good name, be a rat.

Trade Mike Pence for Vladimir Putin. Pence blinks too much and it’s weird, he is tremendously not fun.

No taxes for the top 1 percent. They work too hard at making America great, they shouldn’t have to pay taxes and under me they won’t, only the poor deserve that.

Lock Hillary up. She’s crooked, she lost, she’s a very bad hombre, throw away the key.

A Robert Mueller scandal. Put some fun in his life, he thinks about me too much.

Framed portraits of Barack Obama, Sean Hannity and Vladimir Putin. What can I say, they complete me.

An edited version of my personal taxes from the years 1970-2016. I’m really really tired of people asking about them.

An end to fake news. It’s time for the failing New York Times to really fail, and CNN and the very bad people of liberal media to be tucked away and hidden like my taxes. Take that loser Alec Baldwin, washed-up Meryl Streep and the failing Rosie O’Donnell as well.

Santa, you are very fat and very old, but very responsible and valued by me, only I can value you. I think you can pull this off, and if you do I’ll be a tremendous boy in 2018. If not, you will continue to be really sad.