How my daughter's interracial relationship opened my eyes

When my Pakistani American daughter fell in love with an African American man, I had some soul searching to do 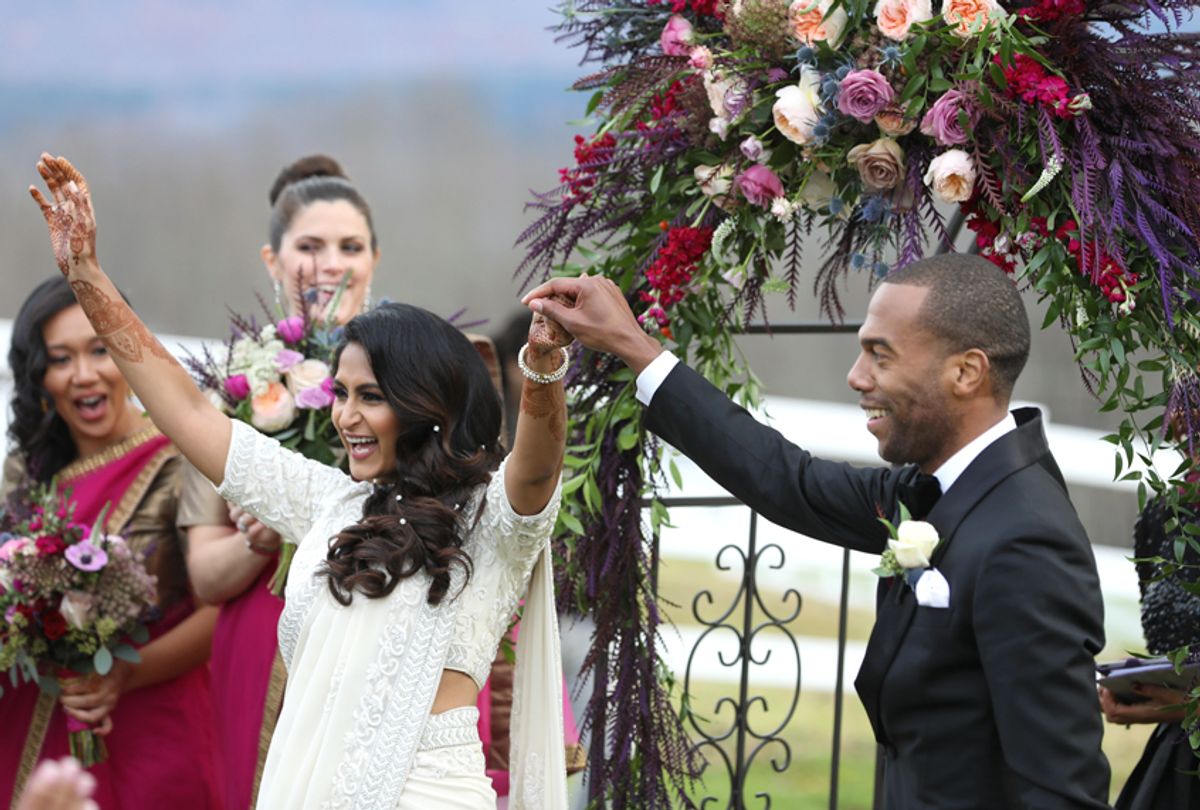 The author's daughter and her groom on their wedding day. (Ryan Merchant)
--

As an FOTB (fresh off the boat) cisgendered, heterosexual, female graduate student from Pakistan attending Tufts University in Boston almost 40 years ago, I was careful not to stray too far from the cultural codes of my desi Muslim roots. I was considered pretty “out there,” of course, by my peers back home in Lahore, and my parents had to bear the burden of family and friends thinking they had gone too far in their liberalism to let me fly the coop to the big bad West at such a tender age. (I was 21 years old.) The real tut-tutting was directed at the fact that I had been “allowed” to leave without a husband to look after me and keep me “pure.”

I was a rebel to be sure — and a budding feminist to boot — but did not want to stray off the expected path too far. And so, though I dated white men briefly, I knew I would marry a Pakistani Muslim man in the end.

The big rebellion was that I fell in love with and married a man from Karachi — an Urdu-speaking mohajir, whereas I was from the dominant Punjabi ethnic group of Pakistan, which comprises most of the Lahori elite from whence I hailed, and who routinely look down upon Urdu speakers. Ironically, his parents in turn were relieved that their son had not married a black woman — a habshi in common parlance — since they’d heard my father was from Nigeria. They had gotten this misconception because my dad at the time was posted on a UN mission in Kano, in northern Nigeria.

These ethnic and racist prejudices held by our parents’ generation are alive and well in our own, even amongst those of us who left our country of origin and settled in the multicultural United States, where we live in a “melting pot” and where interracial marriages are supposedly acceptable  in our day and age. Even in the era of Trump, none of the white people we know who voted for him would admit to being racist. None of our Pakistani or Indian friends voted for him — that we know of — and among these desi friends and acquaintances we hear only horror and anguish expressed at the rampant racism and xenophobia the Trump presidency has unleashed, not least against brown Muslims like ourselves.

However, what we fail to acknowledge is our own internalized racism against black people, a legacy of 200 years of British colonial rule over India, where to be fair of skin is the standard of beauty, where to date and perchance to marry a white person is acceptable to some degree, but not a black person.

When our daughter Faryal told my husband and me ten years ago during her sophomore year in college that she was dating an African American young man of Jamaican heritage from the Bronx, I remember thinking it was a bad idea, hoping this fascination would pass. Jaleni, her then-boyfriend, must have sensed my disapproval, for he told her after I’d met him briefly on a visit to their campus, “your mom doesn’t like me.” He was 22 years old, about the same age I was when I first arrived in this country.

I remain deeply ashamed of my feelings of fear and unease about my daughter and her now brand-new husband’s relationship back then. Perhaps it was that disapproving vibe he got from me that day, perhaps it was his own need to grapple with what a relationship with a woman outside of his own race would mean for him in the future, perhaps my own daughter had feelings of insecurity and a need to please me, to “belong” to the Pakistani side of her heritage. Perhaps it was all of the above that led to their splitting up soon after they both returned to New York after graduation. My daughter took the break-up hard.

In the intervening years — almost a decade — between that difficult heartbreak and the joyous reunion of two young people deeply, irrevocably in love, we’ve all had a lot of time to do some serious soul searching, most of all myself. My husband has always been someone who has walked the walk he talked. He is truly one of the most genuinely open-minded and non-tribal human beings I know. So the problem was never with him.

Despite a lifetime in academia speaking out against and teaching students to critique and resist a racist, heterosexist, patriarchal, imperialist class system, I realized how deeply ideology exerts its hold on us. I recognize how the fear of rejection from our communities and peers constrains our every move, how hard it is to rise above the madding crowd even for those of us who fancy we are rebels of a sort. How, I had found myself thinking, will I be able to protect my daughter and son-in-law from the hurt of their brown/black kids when a racist society judges them inferior or a threatening presence? How will I deal with my fear for their future safety and well-being, the fear that all black folk live with daily in this great country?

The acknowledgement of this fear has ironically been the greatest gift my daughter’s interracial relationship has bequeathed me, for it has made me more empathic, and made real my theoretical commitment to forging solidarity with other brethren of color. I can no longer retreat to any space of privilege, that space the “model minority” myth bequeaths brown immigrants in this country, keeping us people of color divided and separate. Now, I can truly start living up to the karma of brown folk — and reading a wonderful anti-racist book of the same title by Vijay Prashad helped concretize my personal connection to the political mission of solidarity outlined in the work of the late great African American thinker and activist W.E.B. Dubois, a mission I understand with increasing clarity as one of forging real, deep and lasting connections to the souls of black folk, so that we can all truly move beyond the debilitating cliché of guessing who our daughters and sons will bring home to dinner.

As my husband and I have gotten to know Jaleni better over the past couple of years since he and our daughter picked up their relationship again; as some of my upper-class Pakistani women friends have met his hard-working single mother, different in race and class from their own privileged selves, at the bridal shower I threw for my daughter a few months ago; as we now hear these same bougie desi friends  from Scarsdale and Briarcliff Manor starting to say “he’s a lovely man” and “your daughter looks so happy” and “her mother in law seems so loving and down to earth,” then I know my husband and I have contributed in some small way to lifting the burden of racism and classism from the still-colonized minds of our South Asian brethren, including ourselves.

The palpable feelings of joy and love that filled the upstate New York barn where we hosted our daughter's dream wedding just a month ago, uniting brown, black and white friends and family who attended, brought home more viscerally than any sermon or speech or book could the multicultural and multiracial reality that is this country's greatest strength and gift to humanity, beckoning a post-racial world that the Trump era's backwards-facing racism is powerless to resist.

For making us better human beings all around, we have our wonderful daughter to thank. As for Jaleni — I see him simply as an intelligent, loving, kind and thoughtful man who I am proud and happy to call my Damaad.

Fawzia Afzal-Khan is a University Distinguished Scholar and Professor of English at Montclair State University where she served as Director of Women’s and Gender Studies for many years. She has been a Visiting Professor at Harvard University, NYU Abu Dhabi, and Kinnaird College, Forman Christian College and Government College in Lahore, Pakistan. Her many books focus on postcolonialism, Pakistani theatre and Muslim women. She is a published playwright, poet and memoirist, as well as a singer and actor.