Convincing in their presentation, diet wizards promise results they cannot deliver — quite akin to the Wizard of Oz 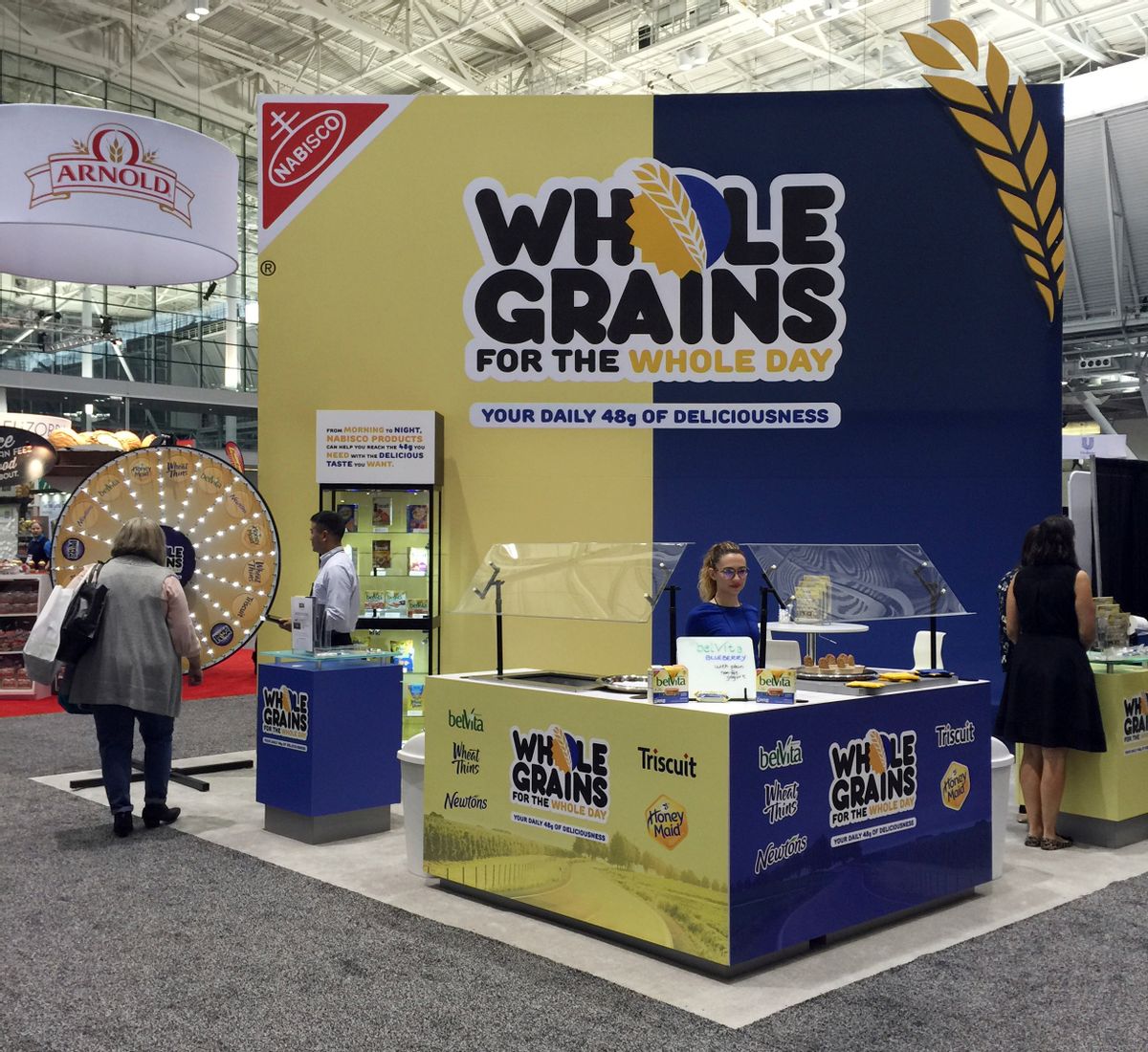 This Oct. 16, 2016, photo shows Nabisco’s booth at an annual dietitians' conference, where company representatives explained the health benefits of their products. The presence of major food companies underscored the conflict-of-interest issues in the nutrition field. (AP Photo/Candice Choi) (AP)
--

For many years, the long-term success rates for those who attempt to lose excess body weight have hovered around 5-10 percent.

In what other disease condition would we accept these numbers and continue on with the same approach? How does this situation sustain itself?

It goes on because the diet industry has generated marketing fodder that obscures scientific evidence, much as the Wizard of Oz hid the truth from Dorothy and her pals. There is a gap between what is true and what sells (remember the chocolate diet?). And, what sells more often dominates the message for consumers, much as the wizard’s sound and light production succeeded in misleading the truth-seekers in the Emerald City.

As a result, the public is often directed to attractive, short-cut weight loss options created for the purposes of making money, while scientists and doctors document facts that are steamrolled into the shadows.

We are living in a special time, though – the era of metabolic surgeries and bariatric procedures. As a result of these weight loss procedures, doctors have a much better understanding of the biological underpinnings responsible for the failure to lose weight. These discoveries will upend the current paradigms around weight loss, as soon as we figure out how to pull back the curtain.

As a dual board-certified, interventional obesity medicine specialist, I have witnessed the experience of successful weight loss over and over again – clinically, as part of interventional trials and in my personal life. The road to sustained transformation is not the same in 2018 as it was in 2008, 1998 or 1970. The medical community has identified the barriers to successful weight loss, and we can now address them.

The body fights back

For many years, the diet and fitness industry has supplied folks with an unlimited number of different weight loss programs – seemingly a new solution every month. Most of these programs, on paper, should indeed lead to weight loss. At the same time, the incidence of obesity continues to rise at alarming rates. Why? Because people cannot do the programs.

First, overweight and obese patients do not have the calorie-burning capacity to exercise their way to sustainable weight loss. What’s more, the same amount of exercise for an overweight patient is much harder than for those who do not have excess body weight. An obese patient simply cannot exercise enough to lose weight by burning calories.

Second, the body will not let us restrict calories to such a degree that long-term weight loss is realized. The body fights back with survival-based biological responses. When a person limits calories, the body slows baseline metabolism to offset the calorie restriction, because it interprets this situation as a threat to survival. If there is less to eat, we’d better conserve our fat and energy stores so we don’t die. At the same time, also in the name of survival, the body sends out surges of hunger hormones that induce food-seeking behavior – creating a real, measurable resistance to this perceived threat of starvation.

Third, the microbiota in our guts are different, such that “a calorie is a calorie” no longer holds true. Different gut microbiota pull different amounts of calories from the same food in different people. So, when our overweight or obese colleague claims that she is sure she could eat the same amount of food as her lean counterpart, and still gain weight – we should believe her.

Importantly, the lean population does not feel the same overwhelming urge to eat and quit exercising as obese patients do when exposed to the same weight loss programs, because they start at a different point.

Over time, this situation has led to stigmatizing and prejudicial fat-shaming, based on lack of knowledge. Those who fat-shame most often have never felt the biological backlash present in overweight and obese folks, and so conclude that those who are unable to follow their programs fail because of some inherent weakness or difference, a classic setup for discrimination.

The truth is, the people failing these weight loss attempts fail because they face a formidable entry barrier related to their disadvantaged starting point. The only way an overweight or obese person can be successful with regard to sustainable weight loss, is to directly address the biological entry barrier which has turned so many back.

There are three ways to minimize the barrier. The objective is to attenuate the body’s response to new calorie restriction and/or exercise, and thereby even up the starting points.

First, surgeries and interventional procedures work for many obese patients. They help by minimizing the biological barrier that would otherwise obstruct patients who try to lose weight. These procedures alter the hormone levels and metabolism changes that make up the entry barrier. They lead to weight loss by directly addressing and changing the biological response responsible for historical failures. This is critical because it allows us to dispense with the antiquated “mind over matter” approach. These are not “willpower implantation” surgeries, they are metabolic surgeries.

Second, medications play a role. The FDA has approved five new drugs that target the body’s hormonal resistance. These medications work by directly attenuating the body’s survival response. Also, stopping medications often works to minimize the weight loss barrier. Common medications like antihistamines and antidepressants are often significant contributors to weight gain. Obesity medicine physicians can best advise you on which medications or combinations are contributing to weight gain, or inability to lose weight.

Third, increasing exercise capacity, or the maximum amount of exercise a person can sustain, works. Specifically, it changes the body so that the survival response is lessened. A person can increase capacity by attending to recovery, the time in between exercise bouts. Recovery interventions, such as food supplements and sleep, lead to increasing capacity and decreasing resistance from the body by reorganizing the biological signaling mechanisms – a process known as retrograde neuroplasticity.

Lee Kaplan, director of the Harvard Medical School’s Massachusetts Weight Center, captured this last point during a recent lecture by saying, “We need to stop thinking about the Twinkie diet and start thinking about physiology. Exercise alters food preferences toward healthy foods … and healthy muscle trains the fat to burn more calories.”

The bottom line is, obese and overweight patients are exceedingly unlikely to be successful with weight loss attempts that utilize mainstream diet and exercise products. These products are generated with the intent to sell, and the marketing efforts behind them are comparable to the well-known distractions generated by the Wizard of Oz. The reality is, the body fights against calorie restriction and new exercise. This resistance from the body can be lessened using medical procedures, by new medications or by increasing one’s exercise capacity to a critical point.

Remember, do not start or stop medications on your own. Consult with your doctor first.