And really, who should? 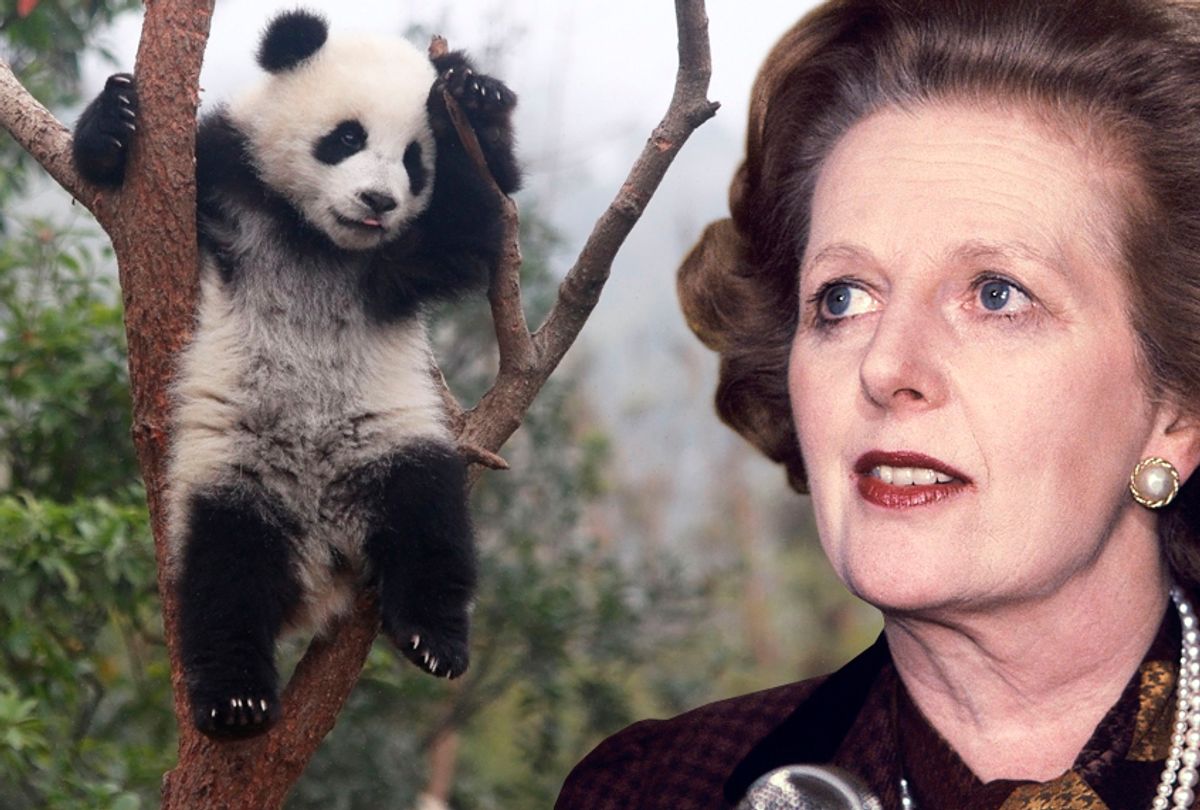 Often hard nosed, hard driving, implacable, often criticized for her lack of soft-touch sympathy for her own people, Margaret Thatcher earned her nickname, the "Iron Lady," in many ways and at many times. A fresh soupçon of historical documentation revealed this week has added a new, less-than-cuddly facet to that already steely persona: Dame Thatcher didn't trust pandas.

Along with a pile of recently released government information about the Thatcher years — one that includes evidence of the former prime minister's knotty relationship with her eventual successor, John Major — comes a bit of correspondence surrounding a proposed public appearance involving one of the black-and-white Asian ursines.

Attempting to engage in some "panda diplomacy," president of the London Zoological Society, Solly Zuckerman, the Baron Zuckerman, suggested that Thatcher become personally involved with the London Zoo's 1981 loan of its male panda to the Smithsonian Institution in Washington for breeding with its female panda.

Sir Robert Armstrong, Thatcher's cabinet secretary, reported that, "Lord Zuckerman sees this as a signal demonstration of the special relationship and would be very happy to time the announcement of the loan or the delivery of the panda in any way that the prime minister thought would be most likely to benefit Anglo-American relations."

Armstrong added that Baron Zuckerman, "suggested that the prime minister might like to take the panda in the back of her Concorde, when she goes to Washington next month."

It was not, all things considered, a poor idea. Thatcher, though, wasn't having it.

Clive Whitmore, the prime minister's private secretary responded, writing that Thatcher "has commented that she is not taking a panda with her." He quoted her as saying, "'Pandas and politicians are not happy omens!'"

It's unclear exactly to what omens the prime minister was referring, but the message was clear: Thatcher refused to be trapped on a supersonic passenger jet with a bamboo-eating, jumped-up sloth, thank you very much.

The Iron Lady wrote a personal note in her own hand on the document reading, "Lord Z knows more about pandas than I do – I am sure he can arrange these things." Again, the woman who fought trade unions, the Argentinians and more, wasn't going anywhere near a damn panda.

And, really, can one blame her? Visibly cute, for certain, pandas still sport considerable strength, impressive jaws and teeth, sharp claws and have been known to attack humans. Behind their placid, black eyes, who truly knows what they're thinking, what plans they have for us? Mysterious and impenetrable, perhaps it is wise to leave these naturally solitary giants alone, as the prime minister well knew.