Newt Gingrich promises "enormous shock" in 2018: Yeah, but for whom?

Everyone's still wrong about Trump, says former speaker, and Republicans will surge to victory. Like in 1998, Newt? 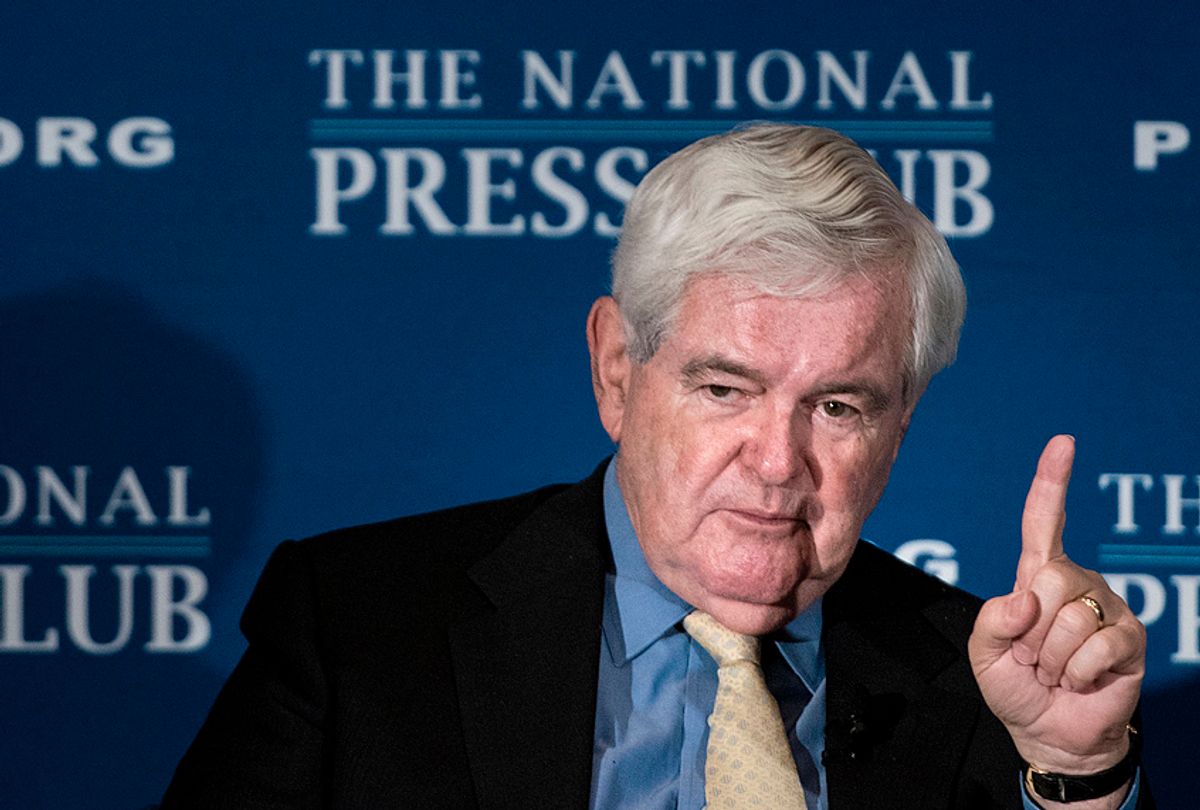 As we come to the end of this stressful Year One, and political observers look back on the carnage wrought by Donald Trump, there are a few rays of hope. While Trump touts his nonexistent successes and fatuously claims to be the most accomplished president in history, the people who crunch numbers are noting that the Democratic edge in the generic 2018 congressional midterm ballot is reaching historic levels.

Harry Enten at FiveThirtyEight put it this way:

The Democratic advantage in the FiveThirtyEight generic ballot aggregate is up to about 12 points, 49.6 percent to 37.4 percent. That average, like the CNN poll, also shows Republicans in worse shape right now than any other majority party at this point in the midterm cycle since at least the 1938 election.

He had previously calculated that in order for the Democrats to flip the House, considering their disadvantage from gerrymandering, they would have to be up by 5.5 to 8 points. According to him, there are as many as 103 GOP-held seats that could be in danger. Obviously, most of those Republicans will win because incumbents almost always do. But consider the 2010 election, when the GOP had a seven-point advantage in the generic poll and there were 101 Democratic seats in possible danger. The Republicans won 65 of them. It happens.

Of course, public opinion can change over the course of a year. But Enten points out that, historically, "most large shifts on the generic ballot from this point onward have occurred against the party that holds the White House. Once you take into account who holds the White House, the generic ballot at this point is usually predictive of the midterm House result." In other words, the Democrats have a very good chance of taking back control of at least the House -- and possibly even winning back the Senate.

One might assume the Republicans would be rending their garments over this. There have been reports of major infighting among the White House staff over the political operation, and numerous strategy memos and think pieces have discussed how to deal with what could be a major turnover next year. There are signs that the House and Senate are at odds over the best strategy. Paul Ryan, evidently full of confidence after passing his huge tax cut for wealthy donors, wants to push on with his dream of destroying Social Security and Medicare, while Mitch McConnell remembers that most GOP voters are over 65 and says it's a no-go.

President Trump, meanwhile, apparently believes he can dupe the Democrats into joining the presidential ring-kissing rituals to which Republicans have recently committed themselves. He has announced his intention to pass big bipartisan bills, after which everyone in the whole country will want to vote for the GOP. Trump believes a lot of ridiculous things.

But even Trump isn't as optimistic about 2018 as his close adviser Newt Gingrich. The former speaker has taken to Fox News to proclaim that because of all the fake news and lying about Donald Trump, "the size of the GOP victory in 2018 will be an enormous shock." He quotes a political blogger named Barry Casselman, who argues that because Roy Moore lost the seat in Alabama and the Democrats forced Al Franken from the Senate, the Republicans will win more seats in 2018 and it could be a big red wave instead of a blue wave. Gingrich doesn't really explain how this would works, but he was obviously impressed by the idea.

Gingrich also points to a column by Scott Adams -- the cartoonist who draws "Dilbert" -- which lists 20 supposedly incorrect political opinions about Trump. These include such misguided judgments as "Trump’s tweeting will cause huge problems," "Trump will not work effectively with leaders of other countries" and "Trump is incompetent." According to Adams, holding such wrong opinions requires that one stop talking about politics altogether, to which Gingrich adds that by Adams’ standard, "most elite 'analysts' would have to be quiet, because they have been so consistently wrong about Trump."

Mostly, however, Gingrich believes that 2018 will become a red wave of epic proportions because of the massive tax cut, about which he claims the liberal fake news media has poisoned the minds of the American public. He says that when average Americans find out how rich they are, thanks to Donald Trump and the Republicans, they will come out and vote in droves for the GOP.

Setting aside the nonsensical notion that a few hundred dollars will be "life-changing" to middle-class families, or that they aren't aware that the wealthiest Americans are being showered with millions of dollars in tax breaks as a reward for supporting Republican politicians, let's take a moment to recall that Newt Gingrich has always been wrong about everything. Back in his heyday during the 1990s, he had one great moment of victory in 1994 when he and his class of self-styled revolutionaries took over the Congress in a midterm rebuke to Bill Clinton's unpopular presidency. Clinton had an approval rating that year that bounced between 45 and 50 percent, numbers Donald Trump can only dream of.

You'd think Gingrich would remember that, or at least recall the moment of his great downfall in the next midterm election four years later, as colorfully described by CNN at the time:

In the same cloud of outrage and optimism that has been wrapped around him all year, Gingrich took to the phones on the afternoon of Election Day still predicting that the President would be made to pay for his sins and that the Republicans would pick up six to 30 seats. But as the hours passed, the numbers just kept getting worse, and by 10 p.m. the Republicans were barely breaking even in the House. Then another seat looked vulnerable. Then seven more. Then, around 10:45, 13 seats. "At that point, we thought we lost the House," one said later. When the last returns came in, Gingrich had lost five seats -- a setback not matched since 1822. "Well," said Gingrich when it was all over, "we all misjudged this one."

It was Gingrich who had insisted they would win big, and after that he was out as speaker within 48 hours. I'm willing to bet that his powers of prognostication haven't improved any with the passage of time.