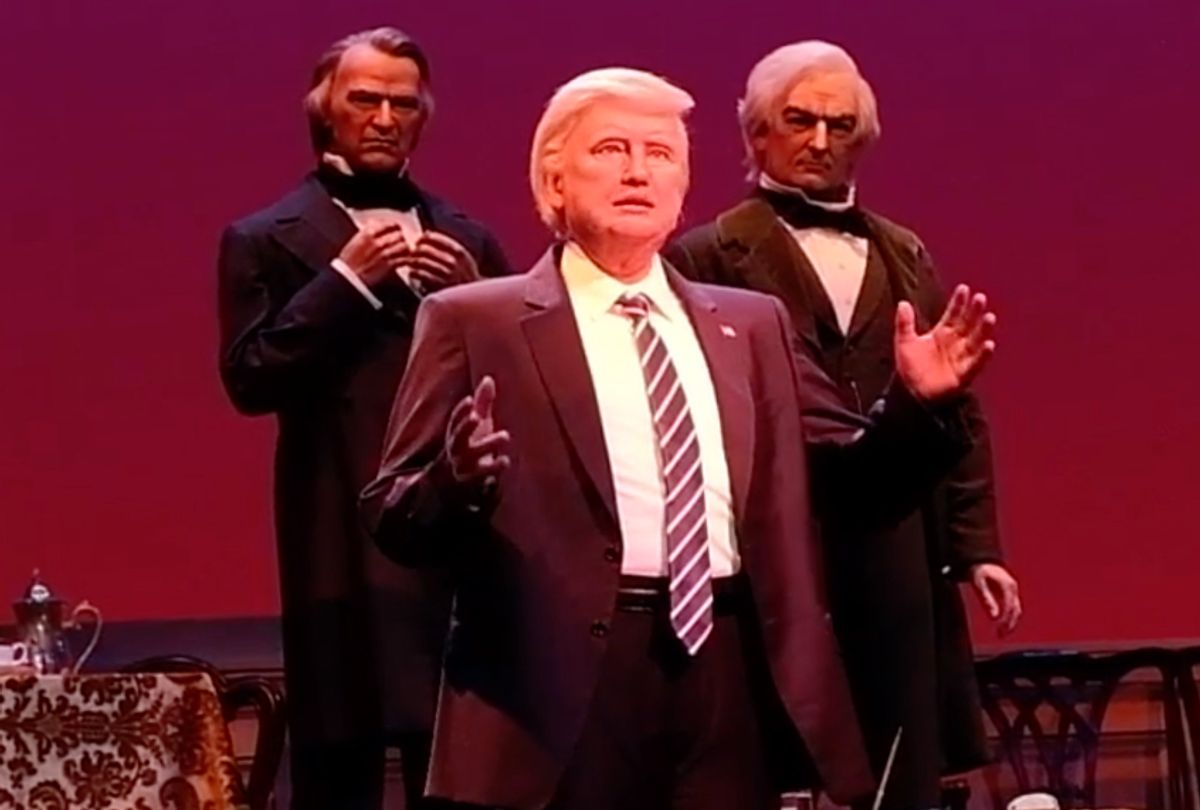 In what may be the perfect, poetic denouement for the atonal horror show that was 2017, a man claims he was removed from Disney World in Florida after screaming "lock him up" at the new animatronic, talking statue of President Donald Trump at the resort's Hall of Presidents attraction.

As previously reported on Salon, Disney World recently unveiled a mechanical version of the 45th president of the United States, a debut that was followed by much hue and cry over the figure's odd, gargoyle-like face, which bore only a passing resemblance to the man portrayed.

Though the Trumpbot emits recordings of the real-life Trump, the animatronic president's speech also fails to capture the measure of the man. The text is — compared to what normally comes out of the president's mouth — reasoned, uncontroversial and generally sane. The Trumpbot's recitation lacks the dramatic ups, downs and sideways of his usual patter. Keen Twitter users fixed that problem to the amusement of many.

On Wednesday, Twitter user Jay Malsky, a comedian and actor, uploaded a video of himself apparently attending the new show at the Hall of Presidents featuring the robotic Trump. When it comes to 45's turn to speak, the video appears to show Malsky screaming at the Trumpbot, "Lock him up!"

It's a refrain familiar from when it was used against Hillary Clinton during many of the future president's campaign rallies. To this day, some Trump supporters still shout "Lock her up!" during the commander in chief's public events.

As one can see in the video, audience members were less than pleased with Malsky's interruption. So too, Malsky claims, were the security guards who removed him from the Hall of Presidents and, eventually, Disney World itself.

As one of Malsky's friends reports, the performer was treated well by security guards and discussed the brilliance of comedian Patton Oswalt with them. Oswalt, for his part, seemed delighted by this news.

Breitbart collected a large number of tweets from individuals attacking Malsky both for his politics and for disturbing any children in the audience who weren't already terrified by the artificially pickled flesh of the mechanical golem subbing in for the real-life president. Elsewhere, The Daily Caller declared Malsky was the "saddest man in America" and Sean Hannity's website called him "deranged."

To all of them, Malsky offered a statement on The Wrap saying, "Anyone that’s upset I disrupted a family vacation can check their privilege and consider getting mad about the thousands of children being taken away from their parents because of Trump’s racist immigration policies, or the families of the hundreds of trans Americans murdered each year by transphobic and homophobic people, or the negative impacts of the tax bill on poor and middle-income Americans."

It continued, "My only regret us that Trump hasn’t blocked me on Twitter yet. . . and that Cher hasn’t retweeted me yet."

But this story is about more than just one man. Truly, screaming at the top of his lungs in the darkness of the Hall of Presidents, Malsky was all of those who have either shouted in the streets or hidden under the covers in a year in which perhaps the least qualified individual available for the position ascended to the presidency of what still remains the most powerful nation on earth.

Yelling to the point of exhaustion at poorly dressed flesh puppet who was neither aware of his protests nor capable of reasoned response to them, Malsky was the state of the resistance in 2017 — a movement that has made strides at the local, state and national levels, yet has failed to sway or stop an unfortunately implacable and obstinate commander in chief who, like the Trumpbot, repeats his false talking points on what appears to be an endless loop. Like his android, Trump seems tireless. Like Malsky, it is those who resist him who often get spent.

In 2018, it is for those who oppose Trump in good faith to find find new, effective ways to make themselves heard and new ways to bring this country out of the darkness we find ourselves shouting in. Oh, and it would be nice Cher retweeted Malsky. He deserves a treat.