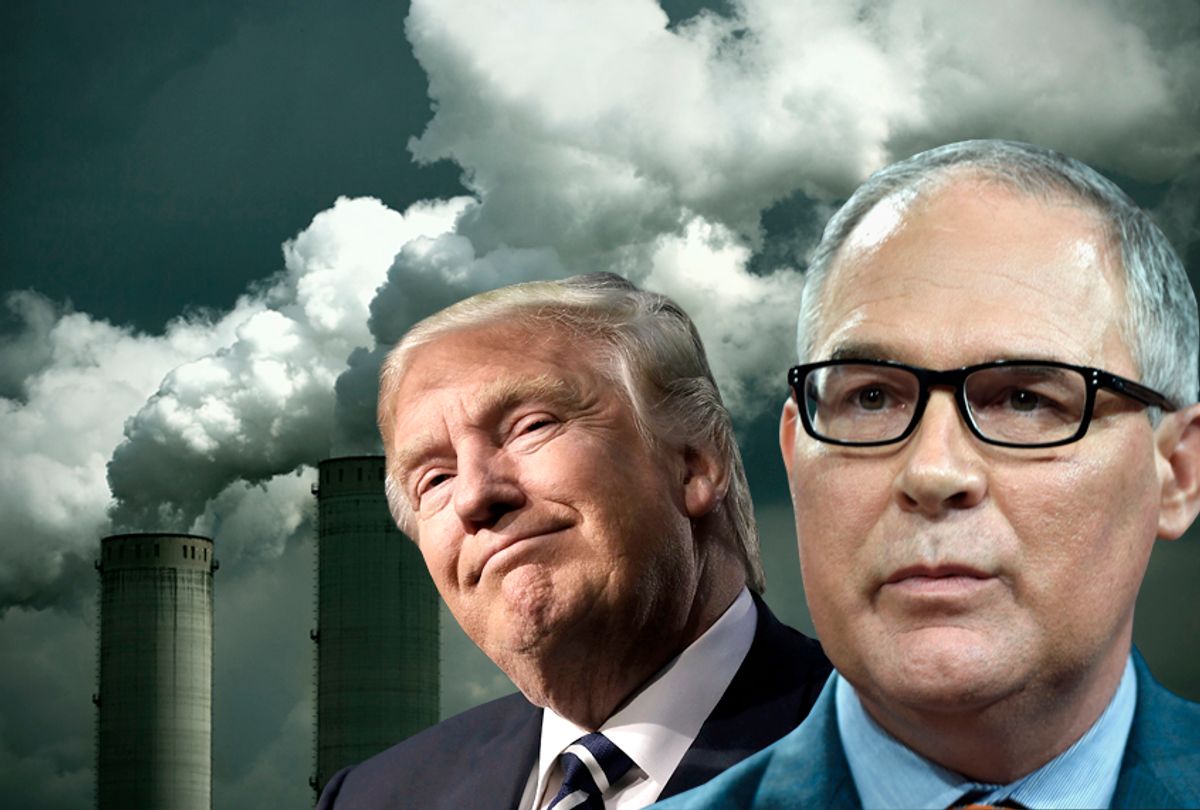 Capping off a banner year for states suing the federal government, eight Northeastern states have joined together to sue the Environmental Protection Agency (EPA), hoping to force the agency to protect them from air pollution being emitted in other states, especially from coal-burning power plants. It's a problem that has persisted for years and through multiple administrations, but under Donald Trump and his EPA head Scott Pruitt, the situation has become dire as the agency resorts to elaborate skulduggery to avoid doing its job and fighting air pollution.

For states in the Northeast and Mid-Atlantic regions, such as New York and Massachusetts, a shocking amount of air pollution comes from out of state, carried on national wind currents that blow through the Midwest toward the East Coast. States demanding relief say that 70 to 98 percent of their air pollution comes from out of state, and that it's impossible for them to improve their air quality unless other states are forced to up their standards.

“Unless it’s dealt with, we’re going to continue to see some Northeast states fail to meet health protective air quality standards," Mark Kresowik, eastern regional deputy director of the Sierra Club's Beyond Coal campaign, told Salon. "People are going to continue to suffer from asthma attacks, respiratory disease and even death as a result."

Estimates from the Environmental Defense Fund and the EPA estimate the number of deaths from inaction on this cross-state air pollution problem to be in the tens of thousands a year. Recent troubling research from the T.H. Chan School of Public Health at Harvard suggests the problem may be worse than previously supposed, as even short-term exposure to air pollution, including at levels well below national safety standards, is linked to higher mortality rates among elderly Americans.

In 2013, a group of states asked the EPA to add Illinois, Indiana, Kentucky, Michigan, North Carolina, Ohio, Tennessee, Virginia and West Virginia to what is known as the Ozone Transport Region, an area of the country that the federal government holds to higher pollution control standards. The EPA was required to come up with an answer by October 2017. Unsurprisingly, the endlessly pro-coal Pruitt has ruled against the request.

"As state attorneys general, we want to ensure that this agency is not ignoring its obligation under the Clean Air Act to curb dangerous ozone pollutants and protect public health,” Massachusetts Attorney General Maura Healey told Salon.

The EPA says there's no need to add these new states to the Ozone Transport Region because other regulations, such as the Cross-State Air Pollution Rule finalized under the Obama administration in 2011, are better equipped to deal with the problem. The New York attorney general's office disputed this argument, noting that the EPA itself had noted, in the preamble to a 2017 update to the Cross-State Air Pollution Rule, that it did not "fully resolve most of the air quality problems" caused by cross-state pollution.

"The EPA has both denied our petition to expand the Ozone Transport Region, and pointed to the CAA's Good Neighbor provision as the appropriate tool to address upwind smog — while acknowledging that the very same rule doesn't provide downwind states with the necessary tools to protect our residents," Amy Spitalnick, press secretary for New York Attorney General Eric Schneiderman, told Salon.

But the whole situation has been made much worse, because there's no indication that the EPA under Pruitt has any interest in enforcing the Cross-State Air Pollution Rule in the first place. Instead, the agency keeps ignoring petitions from states asking for such enforcement, which has led at least two states in 2017 to sue the EPA for failure to respond to its entreaties.

"This amounts to nothing but a shell game, in which New Yorkers' health and well being are at stake," Spitalnick added.

"What [Pruitt's] doing is cutting the legs out from under the agency and depriving it of its ability to act and creating false barriers to move forward," argued Jon Mueller, a former Justice Department lawyer who now works as vice president for litigation at the Chesapeake Bay Foundation, adding that Pruitt's strategy is "two-faced."

The Chesapeake Bay Foundation is invested in the fight over cross-state pollution because many pollutants that are carried by air end up in the waters of the Chesapeake Bay, the Great Lakes and other important Northeastern water sources. Pollution, particularly nitrogen, causes imbalances in the ecosystem that eventually lead to "dead zones" where no grasses or animal life can survive. Mueller explained that it will take years to restore the Chesapeake Bay habitats -- and that it may never happen at all if the EPA keeps finding ways to delay enforcing better pollution standards.

The situation is a complex one, which environmental activists suspect is by design. Mueller expressed frustration at the bewildering game of three-card monte Pruitt seems to be playing. When the EPA says rejects one method of cleaning up the air because another method is better, that can sound entirely reasonable. Only those who are "really paying attention to those regulations and what the administration is trying to do to them," Mueller said, realize that Pruitt has no intention of pursuing the alternative course either.

Zooming out a bit, the entire debacle also exposes the basic emptiness of most right-wing rhetoric regarding federal bureaucracy. Republicans and conservative media have spent decades exploiting people's understandable frustrations with bureaucratic red tape in order to stoke discontent about the concept of regulation itself. But once in office, leaders like Pruitt have demonstrated that they are diabolically clever at manipulating red tape to throw up obstacles against those who simply want to enact or enforce basic safety and health regulations. Republicans are not against red tape at all, it turns out — just against any laws or regulations that puts the planet and people ahead of fossil-fuel industry profits.