This is future history — 2017 as it will be remembered in all its good, bad, and bigly words 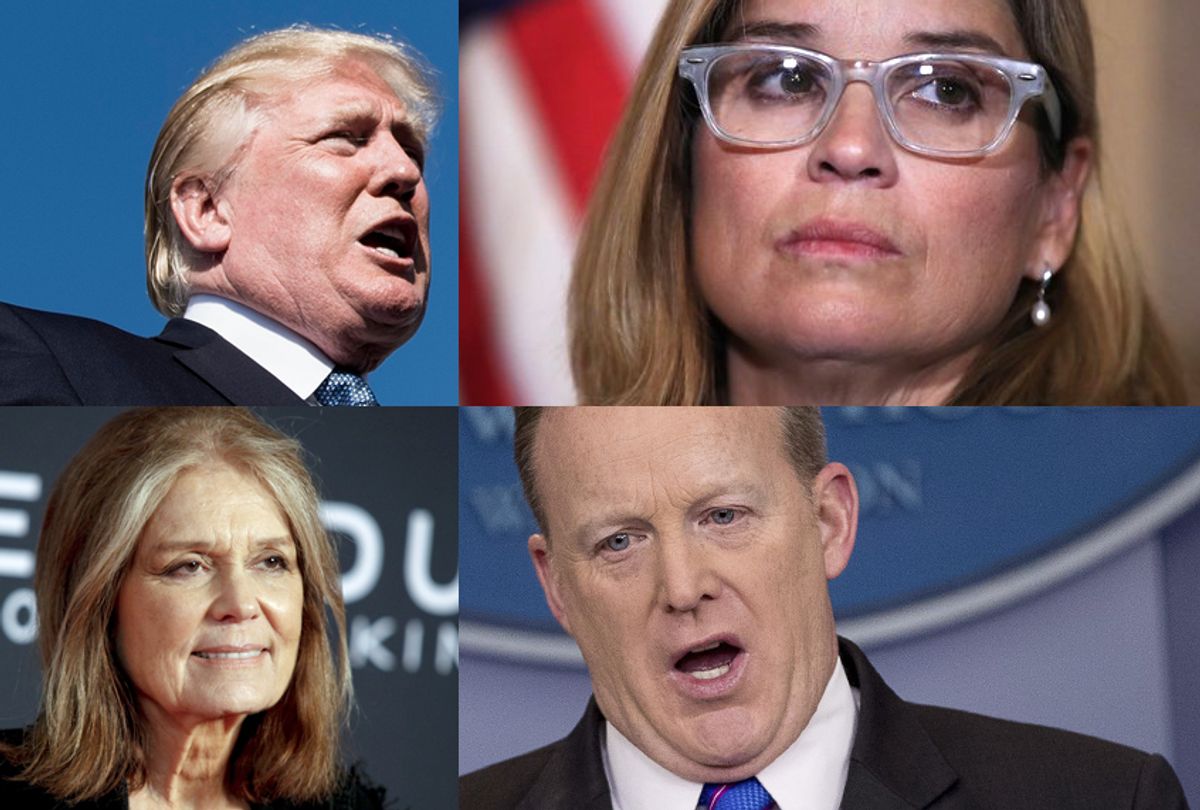 The last 365 days have been a bumpy ride for Americans, to put it nicely.

The year started just three weeks shy of Donald Trump assuming the presidency, a change in the guard that was unfathomable to many of us, and is still frankly hard to digest. But once the clock struck midnight on Jan. 20, 2017, the country officially entered the Trump Era.

Perhaps what happened the next day, the Women’s March — which turned into the biggest nonviolent protest around the world — encapsulated a national trend that would play out over the next 11 months. Whatever injustice Trump has thrown at America, many Americans have fought back in the name of democracy and civil rights. While it’s unclear how or when Trump’s presidency will end, the reactions to Trump's many wrecking balls have shown the resolve of Americans.

In 1967, Martin Luther King Jr. gave a speech at the 11th Convention of the Southern Christian Leadership Conference titled “Where do we go from here?” In it, he uttered one of the most famous quotes in American history: “Darkness cannot put out darkness; only light can do that.” Those words couldn’t ring truer today. Democracy may be threatened, but it will not die in America’s darkness.

While reflecting on the quotes that define 2017, it’s apparent that many of them encapsulate a dour mood — starting with Trump’s inaugural speech, in which he decried "rusted out factories, scattered like tombstones across the across the landscape of our nation." Trump's fatuous slogan “Make America Great Again” will surely live on and be cited in history textbooks, as will Kellyanne Conway’s quote about “fake news” that incited a war between the Trump administration and the media.

And amid the chaos, there have been some hopeful, historic moments that will serve as agents of peace and change in the future — from policy leaders fighting for the planet’s future to Jimmy Kimmel’s emotional speech on health care to actresses like Ashley Judd speaking out against the abuses from Harvey Weinstein.

In this roundup, some of the quotes might bring up times we’d rather forget, but let them be a reminder of our resilience — not defeat.

"This was the largest audience to ever witness an inauguration, period — both in person and around the globe."

"You’re saying it’s a falsehood, and Sean Spicer, our press secretary, gave alternative facts to that."

—Counsellor to the President Kellyanne Conway on Jan. 22, on NBC's "Meet the Press."

“We are here and around the world for a deep democracy that says we will not be quiet, we will not be controlled, we will work for a world in which all countries are connected. God may be in the details, but the goddess is in connections. We are at one with each other, we are looking at each other, not up. No more asking daddy.”

“President Trump’s divisive policies that build walls and take money away from local police do nothing to make us safer. America’s greatness is rooted in our immigrant history, and those who try to turn our country against immigrants are preying on the worst kind of prejudice.”

—Senator Chris Murphy, D-Conn., after Trump ordered construction of a wall on the U.S.-Mexico border, Jan. 25.

"I would like to begin today by apologizing on behalf of you, to me, for how you have treated me these last two weeks...and the apology is not accepted. Because I’m not here to be your buddy. I’m here to swallow gum and to take names.”

"The decision on EU membership has been made by the people we serve. It is now time for everyone, whichever way they voted in the referendum, to unite to make a success of the important task at hand for our country.”

—David Davis, Secretary of State in the United Kingdom, after the House of Commons approved the Brexit vote, Feb. 8.

"What? You guys, I’m sorry, no. There’s a mistake. 'Moonlight,' you guys won best picture."

“What's more, the changes the Trump administration has made, and everything we've learned since the original ban rolled out, completely undermine the bogus national security justifications the president has tried to hide behind and only strengthen the case against his unconstitutional executive orders.”

"Any time you have an executive order or some government decision that’s calling out people by their nation of origin or by religion, we’ve got to be a check against that.”

"Our regular passengers are not going to be denied boarding because they are wearing leggings or yoga pants.”

—United spokesman Jonathan Guerin, after a group of girls wearing leggings weren’t allowed to board a plane, Mar. 16

"Pepsi was trying to project a global message of unity, peace and understanding. Clearly we missed the mark, and we apologize."

—Pepsi spokesperson in a statement in response to the negative reaction to its much-derided ad with Kendall Jenner, April 5.

“If your baby is going to die and it doesn't have to, it shouldn't matter how much money you make.”

—Jimmy Kimmel, in an emotional 13-minute monologue on his talk show, May 2.

“It is my desire that you become an olive tree to construct peace."

—Pope Francis to Donald Trump during their meeting, May 23.

“I call on you to remain confident. We will succeed, because we are fully committed. Because wherever we live, wherever we are, we all share the same responsibilities. Make our planet great again.”

“Lordy, I hope there are tapes.”

—James Comey, in reaction to Trump's claim that he had recorded their private conversations, June 8.

—Jeff Sessions’ repeated response when pressed by the Senate Intelligence Committee on what he knew of Russian election meddling, June 13.

“Reince is a f**king paranoid schizophrenic, a paranoiac.”

—Anthony Scaramucci, speaking to Ryan Lizza and quoted in Lizza's piece in the New Yorker, June 27.

—President Donald Trump, in response to the Charlottesville protest, Aug. 15.

“I will surely and definitely tame the mentally deranged U.S. dotard with fire.”

“Wouldn’t you love to see one of these NFL owners, when somebody disrespects our flag, to say, ‘Get that son of a bitch off the field right now. Out. He’s fired. He’s fired!’”

“After the election, I made a comment that I thought the idea misinformation on Facebook changed the outcome of the election was a crazy idea. Calling that crazy was dismissive and I regret it. This is too important an issue to be dismissive.”

—Mark Zuckerberg about questions over Facebook's ability to spread misinformation to voters, Sept 27.

"If anybody out there is listening to us, we are dying and you are killing us with the inefficiency and the bureaucracy.”

"The investigation has not even been completed. I think it's premature to be discussing legislative solutions, if there are any.”

“Women have been talking about Harvey amongst ourselves for a long time, and it's simply beyond time to have the conversation publicly.”

—Ashley Judd speaking to the New York Times, in their article breaking the news of the allegations against producer Harvey Weinstein, Oct. 5.

“Houston, we have a championship team and no one can take that away from us.”

“We must confront systemic oppression as a doctor would a disease. You identify it, you call it out, you treat it and you defeat it.”

—Colin Kaepernick, after being honored by the ACLU for his activism, Dec. 4.

“I of all people am aware there is some irony in the fact I am leaving while a man who has bragged on tape about his history of sexual assault sits in the Oval Office and a man who has repeatedly preyed on young girls campaigns for the Senate with the full support of his party.”

“I have always believed that the people of Alabama have more in common than to divide us. We have shown not just around the state of Alabama but we have shown the country the way that we can be unified.”

“Instead of providing a tax cut that overwhelmingly benefits the middle class, this bill cuts taxes for the wealthiest Americans while raising taxes on a majority of families making less than $75,000 in the coming years.”