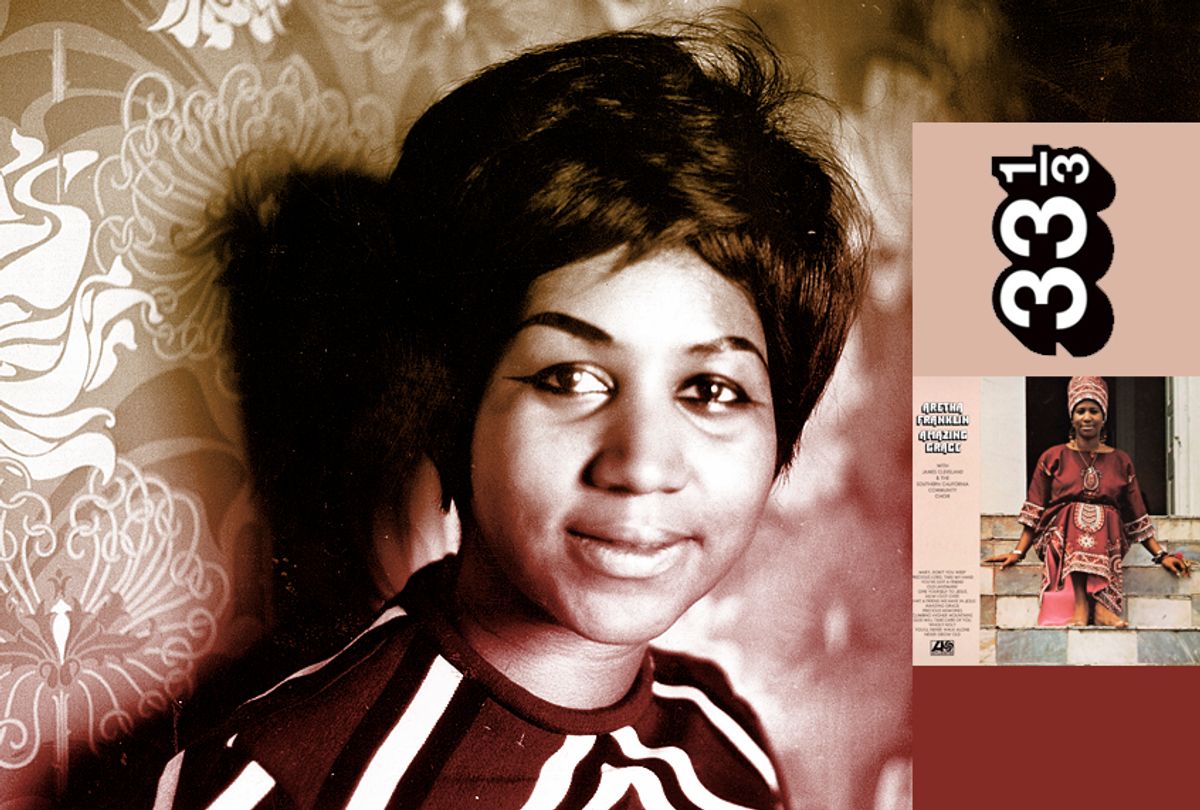 Aretha Franklin could have proclaimed whatever she wanted when she walked up the aisle of the New Temple Missionary Baptist Church in Watts, Los Angeles, on January 13, 1972. Her performance would be the first of two nights there and her introduction, the audience’s cheers, and an arsenal of microphones and cameras, gave her the foundation and anticipation to shout in a voice that had become internationally familiar. Still, at that church, when Franklin wasn’t singing, she hardly said anything.

Franklin was away from Detroit, where she was raised, and New York, where she lived, but a longtime friend, Rev. James Cleveland, led the New Temple service in front of his choir and her working band. Another minister, her father, Rev. C. L. Franklin, was in the house — as were her sisters and a couple of mentors. Her "Young, Gifted and Black" album would be released less than two weeks later, but she never mentioned that in the church. Neither did Cleveland nor her father. Aretha’s sense of style spoke for itself. On both nights she wore bright gowns, and dangling jeweled earrings, yet not an amount of glitter that could be called distracting. Her eyeliner and lipstick enhanced what may have been a shy smile. During those two nights, she sang religious songs with a fervor that incited ecstatic shouts from the congregation, and almost the same reaction from the seasoned musicians working alongside her. Other than unleashing her luminous vocal sound, nothing that Aretha Franklin said pronounced her as one of the most popular and influential singers on the planet. On those January nights she just seemed appreciative and eager to collaborate. About six months later, Atlantic would release the double-album "Amazing Grace," which documented those nights. It remains the biggest selling LP of her career.

Franklin never had to say outright how much recording in the church meant to her. But it can be inferred from her 1974 appearance on the television quiz show “What’s My Line?” When asked about her trajectory, her answer was the sort of laconic statement that has always typified her interviews: “I did sing in the young people’s choir in my father’s church — I started there,” Franklin said simply. “And from there, here.”

She left out a few high points on that quiz show. As the world knows, most of her hit singles had been recorded by that time. National magazines featured her on the cover, and she had become a generational icon even before a nostalgia industry conceived of such a role. Still, Franklin’s polite and brief words on “What’s My Line?” summing up where she came from, and what she’s accomplished, didn’t acknowledge any of that, as if none of it mattered. But through her polite terse statement, she indicated the one thing that mattered a great deal.

The familiar Franklin narrative goes like this: Daughter of a famous minister, Aretha Franklin began singing gospel as a girl; crossed over to jazz-inflected pop; achieved little initial success; then, working with a street-smart producer, brought her earliest church background to a grittier take on r&b became American soul royalty.

All of which contains some truth, yet misses the most interesting part of the story.

Here’s another version: Daughter of an influential minister, Aretha Franklin accompanied her father on the gospel circuit, where she remained close with the music’s most celebrated singers. She was only about a generation removed from this genre’s creation. Going secular, she eventually worked with a consistent team of musicians who ideally complemented her voice during the late ’60s and early ’70s. Franklin brought that group and her family to that Baptist church in Los Angeles and recorded "Amazing Grace" during those two January nights in 1972. For generations of gospel singers, the album is more influential than any of her internationally adored secular songs. Almost 40 years later, Franklin remained tied to her church roots, holding revivals in Detroit and singing at Albertina Walker’s Chicago funeral in 2010, a few weeks before her own serious health concerns curtailed several months of public and media appearances.

So Aretha Franklin began in the church and — as she and her father said time and again — never left. She just stayed on her own terms. Unlike Dinah Washington, she made the road from God to earthly romance a two-way street. Unlike Al Green, she never became ordained while making this circular trip. And, unlike Sam Cooke, few minded when Franklin moved back and forth from this divide. Even today, to call her a gospel artist is not a misnomer. True, her most recognized songs are secular (though maybe not so purely: at the Hollywood Bowl, in June 2009, she ended “Freeway of Love” by calling out to Jesus — an odd juxtaposition, but not that rare). And her mezzo-soprano delivery owes as much — if not more — to her family, friends, and gospel legends such as Clara Ward, as it does to blues/jazz hero Washington. While gospel fans debate whether the music was at its creative height in the late ’40s/early–’50s or late-’60s/early-’70s, Franklin grew up in the center of the action during the former era and achieved her artistic and commercial peak throughout the latter.

"Amazing Grace" also became a milestone because of Franklin’s call-and-response with her collaborators. Within the church, singer/pianist/arranger Cleveland’s vocal tone and compositions are even more influential than Franklin’s voice. He also brought choirs to a higher level of precision. But Cleveland never worked with a more accomplished rhythm section than on this album, primarily Franklin’s working band of bassist Chuck Rainey, drummer Bernard “Pretty” Purdie and guitarist
Cornell Dupree. The group and environment gave Franklin the space and support to sing with more freedom than she had when she cranked out two or three-minute singles throughout the preceding decade.

“It was just an overwhelming sunshine wonderful moment in time,” said Atlantic engineer Gene Paul, who worked on "Amazing Grace." “Because of the love and not worrying about making a hit record. I saw [producer] Jerry Wexler looking at her like she was really in her place. Perhaps the most delightful moment in making a record is not having to be involved in making a hit, and just making beautiful music.”