Seeing the unseen in Ukraine: Why is America sending arms?

Unnoticed by the West, ceasefire talks continue, even as the Pentagon ships weapons to a corrupt Ukrainian regime 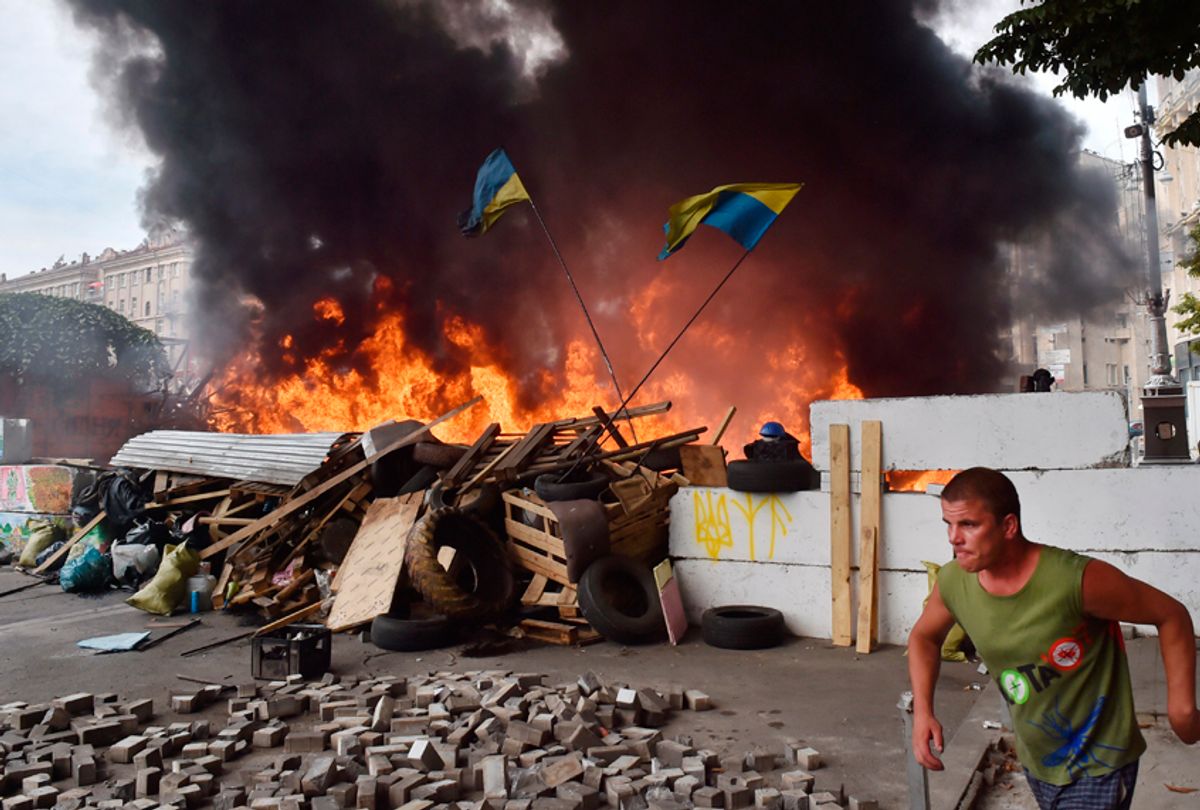 A man runs in front of a barricade burned by Maidan self-defence activists as they clash with residents of Kiev on August 9, 2014. (Getty/Sergei Supinsky)
--

It is difficult to see into the running Ukraine crisis, just as it is in the Syrian case. This has long been so and is entirely by design — an impressive collaboration between the policy cliques in Washington and their clerks in the press. Some events are reported, but only some, for omission is an essential device in these extraordinarily pervasive mis- and disinformation campaigns. Rarely, possibly never, are events presented so as to convey cause and effect or responsibility. All is disparate, all things occur in isolation, some occurrences never occurred, and there is no past. Informed understanding is rendered difficult on the way to impossible.

There were, for instance, the events of a Saturday evening in mid-October, when as many as 20,000 neo-Nazi fanatics marched in Kiev to honor the anniversary of a paramilitary group called the Ukrainian Insurgent Army, which collaborated with Hitler’s Wehrmacht and the SS during World War II. It was the too-common scene in the Ukrainian capital: torches, fascist slogans, denunciations of “organized Jewry.” Before the march, President Petro Poroshenko declared the paramils of yesteryear “an inspiration.”

This, one of the exceptional and usefully revealing events in Ukraine during the year now passing, went unreported in the corporate press: nothing in the New York Times, nothing in the Washington Post, nothing on the networks, nothing more or less anywhere. Here is an account RT published, and I link to it with no shred of apology. How, to bring the point home, are we supposed to understand events in Ukraine when faced with omissions such as this?

My answer: We are not supposed to understand events in Ukraine.

Ukraine has been off the boil for some time now. There have been very few reports of any kind for many months. But the troubled nation on the fault line between East and West has been getting more attention of late. Several events have pushed their way into the news. They are reported as if wholly unrelated, in the usual way. But if we do our best to take them together, they suggest that the Ukraine crisis could return to the dangerous tension that followed the American-cultivated coup of February 2014. In the year to come, indeed, we may see a denouement.

I sat up and took notice when hints of a revived ceasefire began to drift in within the past month or two. These were often not much more than stray remarks emanating from Moscow or one of the European capitals. They suggested a renewed effort to implement the agreement known as Minsk II, after the city in which it was negotiated three years ago this coming February. The signatories of Minsk II were the Kiev government, Russia, Germany and France. The U.S. was pointedly excluded — not at Moscow’s behest so far as I could make out at the time, but because the French and Germans were fed up with American subterfuge intended to keep a dangerous and costly conflict going.

In his year-end remarks a few weeks ago, Vladimir Putin made it clear that he still regarded Minsk II as the basis of a resolution in Ukraine. Why did he single out that semi-moribund accord, I wondered? And why did he subsequently indicate that Washington’s tolerance of the Kiev government’s stubborn unwillingness to observe Minsk II was the main obstacle to a comprehensive settlement?

We now have apparent answers to these questions.

It turns out that Minsk II is nothing like moribund. Its signatories have been in intense negotiations — unreported in our press, naturally — for some months. These talks have proceeded according to what is called the Normandy format: It was in northern France three years ago that the four foreign ministers began to consult via telephone. Three of them — the German, French and Russian ministers — appear to have been working hard to bring Ukraine into conformity with the accord’s terms.

Last week we had news that the European and Russian ministers have met with some success. Prisoner exchanges were a key aspect of the Minsk II accord. They were intended as confidence-building steps in the early stages of a settlement process. Last Wednesday Kiev and the rebellious provinces in eastern Ukraine executed the largest exchange in the conflict’s history: 73 Ukrainians held as prisoners in the east were sent home, while Kiev released 200–odd personnel captured in the rebelling regions.

It is not a huge step, but neither is it inconsequential. Most immediately, it suggests that progress toward a restoration of the often-breached Minsk accord may come in 2018: a renewed momentum. But think about it: It also tells us that the two European powers and Russia finally succeeded in pressuring Kiev to cooperate. It is anyone’s guess how they got this done, but it is important, for the Minsk signatories have rarely, if ever, been able to persuade the Poroshenko government to observe its Minsk II obligations. Given that Kiev is a U.S. client requiring life support (via the International Monetary Fund) for its survival, it is evident that Poroshenko has enjoyed Washington’s dispensation in ignoring the accord’s stipulations.

Intensified negotiations and a prisoner exchange: That makes two recent events. Now let us note and connect a couple of others so as to taste the forbidden fruit: some modest measure of understanding as to what is going on in Ukraine. This will not take long.

Fighting between the two sides had escalated considerably during the months of intensified negotiation, most obviously. Kurt Volker, President Trump’s special emissary on the Ukraine question, termed it the deadliest fighting since the conflict began after the 2014 coup. In my read, it is very likely Ukrainian forces remain, as they long were, the primary aggressors in Kiev’s war with the eastern regions. While it may never be possible to assign clear responsibility for this, there is no case whatsoever for casting Kiev in a purely defensive role. This we know at the very least. And again, what Kiev does it does with Washington’s approval, tacit or otherwise. This we also know.

Just before Christmas, Washington dropped a big one. The State Department announced that the Pentagon will begin supplying Ukraine with lethal weapons, while the administration will allow U.S. defense suppliers to sell Kiev small arms. There is a long story here. Since the 2014 coup we have watched what amounts to a subtle search for just how far the U.S. can intervene in Ukraine without prompting Moscow simply to bring the Poroshenko government, and with it the American adventure, to an abrupt end.

Warmongers such as Senator John McCain have been agitating in favor of arming Kiev for years. A year or so after the coup, the Pentagon sent military trainers to work with Ukrainian troops. The Obama administration drew the line at offensive weapons. But now Kiev will have the Javelin anti-tank missiles it has long coveted. Last summer, not to be missed, U.S. special forces took part in a military exercise on Ukrainian soil for the first time. That seems to be about the time Germany, France and Russia finally began to get somewhere with Kiev.

What are we watching? In my read no more or less than what has been going on in Ukraine since the coup in Kiev. It was hard to see then and so it is now, but let us not fail to register those events it is possible to discern and interpret.

On one hand, Europeans have recently shown very modest signs of progress toward implementing a ceasefire as a preliminary to a comprehensive agreement, and Russia remains with them while making a couple of things clear. One, a long-term settlement in Ukraine requires a federalist governing structure to keep the nation whole while accommodating its historic, ethnic, cultural and linguistic differences. (I have long agreed on this point; it is incorporated into Minsk II.) Two, Russia will not withdraw its support for the eastern regions until they are able to defend themselves against what could otherwise be a bloodbath. This latter was another point Putin made clear in his year-end remarks.

On the other hand, there are the Americans. The U.S. continues to encourage the pathologically corrupt Poroshenko government — consider this notable year-end piece in the Kyiv Post — even as its ratings in the opinion polls are consistently in single digits. At the very moment the Minsk II signatories finally achieve enough leverage over Kiev to force its cooperation, the U.S. begins to arm it.

One final note: It is very unlikely the apparent revival of Washington’s spoiler role in Ukraine is President Trump’s doing. In August of 2016, as some readers may recall, candidate Trump insisted that the Republican Party remove the plank in its platform that specifically mandated weapons sales to the Kiev government. But Trump’s preference for a new détente with Moscow, as is well known, spooked the national security apparatus. Four months into his presidency — and it is much easier to remember this — he was effectively forced to surrender control of foreign policy to the Pentagon in his “my generals” speech. That was last spring. In my read, Defense Secretary Mattis and H.R. McMaster, Trump’s national security adviser, are now shaping Ukraine policy.

I wish all readers a Happy New Year and an eyes-wide-open 2018! My thanks to all for following the columns, and especially to those who take the time to comment. I read them all and learn from many.