New York in the 1960s: John Lindsay, Joe Namath and the rise of "Fun City"

“He is fresh and everyone else is tired”: The quarterback and the mayor were symbols of a younger, energetic NYC 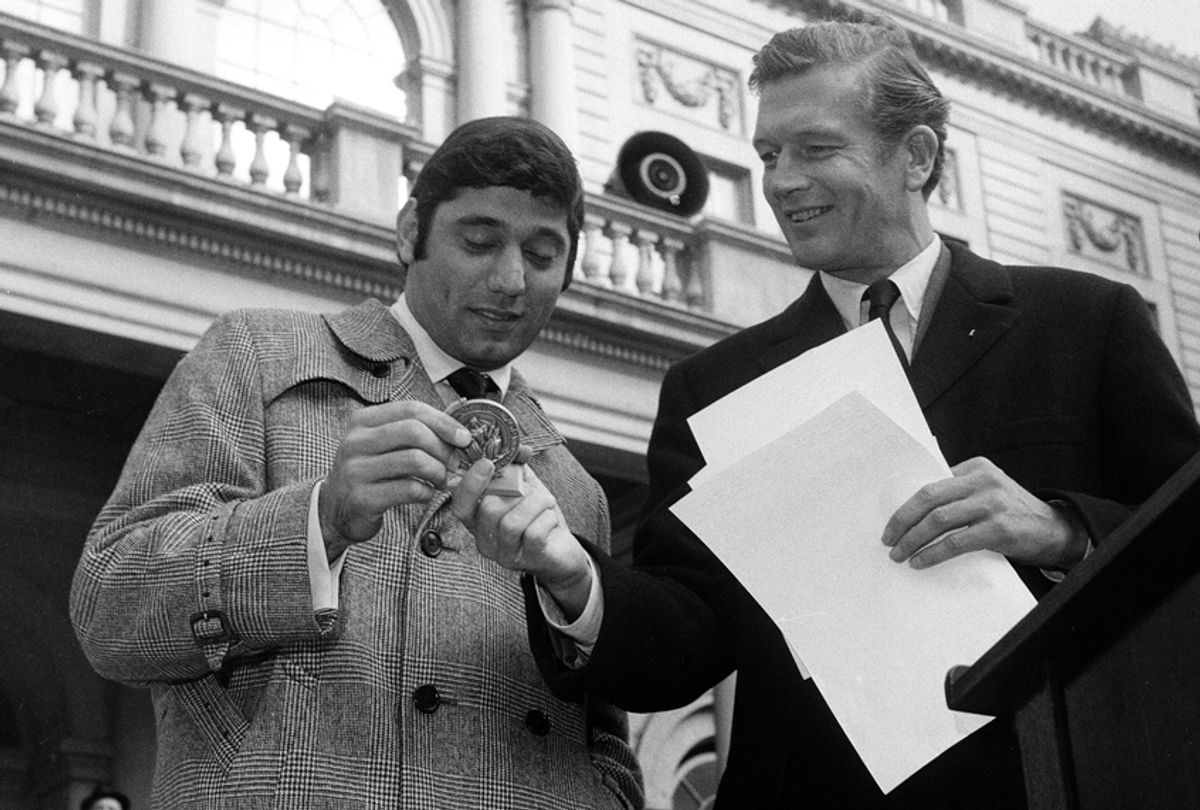 Excerpted with permission from "Fun City: John Lindsay, Joe Namath, and How Sports Saved New York in the 1960s" by Sean Deveney. Copyright 2018, Sports Publishing, an imprint of Skyhorse Publishing. Available for purchase on Amazon, Barnes & Noble and IndieBound.

The Scottish poet, Thomas Campbell, once wrote, “Coming events cast their shadows before.” For New York in the late 1960s, those shad­ows dated back to 1957. Consider some of the events that unfolded that year, some of which were clearly momentous at the time, some whose impact would not fully be felt until the end of the next decade:

On January 1, 35-year-old lawyer John Lindsay left his post as an assistant to Attorney General Herbert Brownell. During his tenure with Brownell, the two had become close, and Brownell would be Lindsay’s mentor for years. Though he was moving back into the private sector with his old law firm, Lindsay—who helped Brownell draft the legislation that would become the 1957 Civil Rights Act—had gained a taste for public service and was eyeing the congressional seat in his home district, Manhattan’s 17th.

On January 3, Harry Wismer, a broadcaster and 20 percent stockholder in the Washington Redskins, charged the team with racial bias while speaking at an event for black journalists. George Preston Marshall, the team’s owner and president, was blatantly racist, and the Redskins had no black players on the roster. The race issue would be one reason Wismer would split with the Redskins and, two years later, buy into a new football venture known as the American Football League. Wismer’s team, the Titans, would play in New York’s Polo Grounds.

On one evening in April, a man named Hinton X. Johnson (also sometimes referred to as Johnson X. Hinton) witnessed a police officer beating a black citizen in Harlem. When Johnson inter­vened, he, too was beaten. Johnson was a member of the Black Muslims, led by a preacher named Malcolm X. After word of Johnson’s beating spread, hundreds of members of the mosque began demonstrating in front of the Harlem police precinct. Fearing violence, the authorities arranged a meeting with Mal­colm X. Assurances were given that Hinton X. Johnson would be given care in a hospital and those responsible for his injuries would be punished. Satisfied, Malcom X stunned police when he, according to one account, “strode to the head of the angry, impatient mob, and then flicked his hands.” Moments later, as if by magic, the crowd dispersed and the street was empty. “No man should have that much power,” one officer said.

On May 28, the eight owners of National League clubs met in Chicago and voted unanimously to grant permission for the two N.L. teams located in New York—the Giants and Dodgers—to seek new homes. Ebbets Field in Brooklyn and the Polo Grounds in upper Manhattan were growing increas­ingly decrepit, and efforts to have new stadiums built had been long stymied. By the end of the 1957 season, the Dodgers had agreed to move to Los Angeles, and the Giants would head to San Francisco.

On October 22, in Saigon, Vietnam—still a distant and unknown corner of the globe to most Americans—three bombs detonated by Communist terrorists injured 13 American soldiers who were part of a team that had been training South Vietnam’s anti-Communist army. The injuries marked the first casualties the United States suffered in Vietnam.

On December 30, the New York Times reported on the state of New York’s economy. All told, 1957 had been a bad year — 50,000 jobs had been lost in New York, while consumer prices continued to rise, by 2.7 percent. The report noted that the city’s factory employment was hard hit, especially the garment industry, which accounted for 38,000 lost jobs — about 12 per­cent of its total, in just one year. The report also stated that unemployment was expected to rise, and that the average age of an unemployment insurance claimant had gone from 47 to 38 in one year. Good-paying, low-skilled jobs in New York City disappeared at an alarming rate in 1957.

These events were all seeds that would sprout separately but become intertwined in New York City during coming years of dramatic change. New York in the 1960s would be a fast-evolving and nearly ungovern­able city. There would be, concurrently, an overhaul in the sports cul­ture, which had long bound together the heterogeneous citizenry that made up the city. Wismer’s AFL Titans would nearly fold, until new owners stabilized the team and turned them into the Jets. The Dodg­ers and Giants were gone, but an endearingly hapless group of losers, the Mets, replaced them. A couple new sports teams were not going to bring back disappearing manufacturing jobs, end overseas wars or ease racial frustrations. But there could be a time — couldn’t there? — at which the exploits of those teams would help.

The Jets introduced rookie quarterback Joe Namath, the western Penn­sylvania slinger who’d picked up a treacly Southern drawl playing for Bear Bryant at Alabama, to New York in January 1965, giving him an astronomical $400,000. Just four months behind him, Lindsay, the handsome, young liberal Republican hailed in some corners as the next John F. Kennedy, entered his name into the race for mayor of New York, an almost unheard-of act of audacity for a member of the GOP in a city where Democrats had a 3-to-1 advantage. On the day the shaggy-maned Namath was introduced, the Giants retired 38-year-old Y.A. Tittle, who was known as the “Bald Eagle” for his long-bare scalp. And the man Lindsay was seeking to replace was 55-year-old Mayor Robert Wagner, whose three terms in office had left him looking every bit his age. The symbolism was obvious, as was the new-guard optimism that Namath and Lindsay each brought to his field. Lindsay’s campaign slogan, taken from a New York columnist, was, “He is fresh and everyone else is tired.” As it was for Lindsay, so it was for Namath. He was fresh, and everyone else—the New York Giants, the NFL, Mickey Mantle’s Yankees—was tired.

The five years that followed Lindsay’s arrival in the city from Wash­ington D.C. and Namath’s arrival from Tuscaloosa were unlike any other period in the county’s history. Racial politics dominated, and as the civil rights movement evolved into the black power and separatist move­ment, the Vietnam War reached its peak and sparked a level of public protest and dissent not seen in the United States before or since. Frus­trated minority city dwellers led violent eruptions in ghettoes across the country, pushing the issue of the fate of American cities to the fore. The violence was not only carried out in mass settings—this was a time during which Dr. Martin Luther King Jr. and Senator Robert F. Kennedy were murdered, within two months of each other. While the political and demographic order was giving way, the underpinnings of the nation’s culture and social norms were shifting, too. Sexual promis­cuity and drug experimentation were becoming more acceptable, and anti-authority symbols gained popularity. Men even had the audacity to grow bushy sideburns.

In New York’s political milieu, Lindsay was a symbol: the White Urban Crusader.

In New York’s social milieu, Namath was a symbol: the Hedonist’s Quarterback.

Ultimately, the validity of Lindsay and Namath as symbols would rest on job performance, and each would have his own troubling dis­appointments, low points, and vocal opponents. Namath would be doused with hot coffee, engage in a verbal war with sportswriters, engage in an actual fistfight with a sports editor, have his cheekbone broken by an antagonistic opponent, and find his bitterest critics in his own locker room. Lindsay would alienate just about every prominent Republican in the country, was called an “ungrateful son of a bitch” by fellow Republican and fierce enemy Governor Nelson Rockefeller, was labeled a “pipsqueak” by a prominent labor leader, was hated by rank-and-file police officers and firemen, had to escape an unruly mob at a Jewish center in Flatbush, contended with major municipal labor strikes in each of his first three years in office, and saw himself burned in effigy from his City Hall office. But both Lindsay and Namath would have incredible highs. Lindsay’s willingness and ability to stride into ghetto communities, even in the severest of crises, earned him the kind of respect from minorities few white politicians ever could claim. There was a moment, however brief, when it looked like Lind­say could solve the urban crisis, when national magazines hailed him as a potential political savior. Namath, too, for all the physical and verbal abuse he endured early in his career (and later, too) had that one magical season, that one year in which he took the Jets to the Super Bowl, shattered myths, and wrote his name forever into American sports lore.

Lindsay and Namath were just the headliners of the era. New York City was a battlefield for Lindsay’s fight to save cities, but it also began to regain its lost status as a cultural leader with a rebirth of theater and filmmaking in the city, became an epicenter for anti-war protest, saw a massive building boom that reshaped the architecture of the city’s financial districts and followed through on a commitment to green spaces that led to the creation of vest-pocket parks and the closing of Central Park to automobile traffic. During late-1960s ascendancy of Lindsay and Namath in New York, the Knicks would win their first NBA championship in twenty-four years, Muhammad Ali would defend his title at the old Madison Square Garden, the new Madi­son Square Garden would open and host a track meet that featured the forerunner of what would become the 1968 Olympic black power salute. And there were the Mets, who doused Lindsay with champagne in the locker room during their incredible run to the 1969 World Series championship and helped him win reelection a month later.

During his first month in office, Lindsay oversaw a crippling tran­sit strike that shutdown the subways in the city for nearly two weeks. He tried to maintain a positive outlook, saying he still thought New York was a “fun city.” Columnist Dick Schaap lampooned his cheery attitude, writing, “He certainly has a wonderful sense of humor. A little while later, Lindsay cheerfully walked four miles from his hotel room to City Hall, a gesture which proved that the fun city had a fun Mayor.” Over the course of his time in office, Lindsay would reclaim the “Fun City” moniker, using it to describe the kind of place where he’d like to be mayor. Others, though, would continue to use it as Schaap had — loaded with irony — so that even the words Fun City were endowed with layers of meaning and symbolism, capable of carrying opposite meanings depending on context.

It remains the best way to think about the positives and negatives of New York in those years. It was a Fun City.