Why do companies like Dove keep missing the mark on culturally insensitive ads? 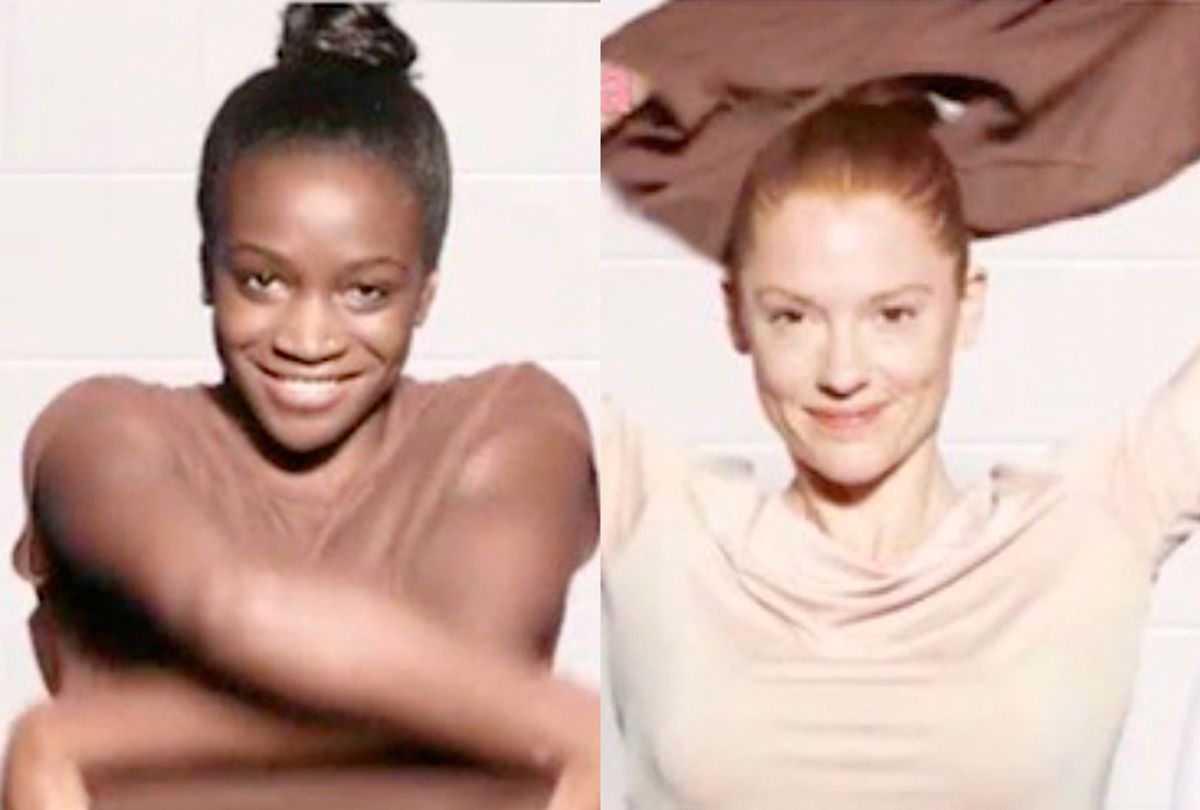 In early October, when Dove released an ad that was at the very least culturally insensitive, outrage from white people and people of color alike ensued. The ad showed women from a variety of ethnicities changing clothes to represent getting clean with Dove body wash. But the depiction of a black model removing her shirt seemingly equated becoming clean with becoming white. It’s unclear what Dove hoped to accomplish with this ad, but the flood of responses led to a public apology and removal of the ad.

This is not the first time in recent history that Dove, along with other large-scale agencies for beauty products and other commodities, has released ads that insulted or downright ostracized black women or communities of color.

A few months ago, Shea Moisture, which provides products tailored to black skin and hair, released an ad that caused backlash. The advertisement, which featured all-white or very light-skinned, loose-haired black women, alienated the company's target customers. Shea Moisture gained its widespread success by providing affordable products for black women who have coarse and kinky natural hair. It didn’t take long for the criticism and product boycotts to trigger an apology from Shea Moisture, but for many, their loyalty to the brand was severed.

Earlier in 2017, Pepsi made a mockery of police and community relations after releasing an ad that made agreement between the opposed views seem as simple as sharing a soda. The oversimplification of the Black Lives Matter movement left many infuriated.

And more recently, in late October, Santher, a Brazilian toilet paper company took the racist-ad cake for using the slogan “Black is Beautiful,” a phrase that became popular in the late ’60s to early ’70s to celebrate black empowerment in the face of European beauty standards. But Santher used the phrase to market the debut of its new black toilet paper. For many, this message literally represented wiping one’s backside with black empowerment and beauty.

2017 isn’t the first year we have seen these and similar marketing campaigns in the news quarterly, if not more often. Many consumers have abandoned product lines they have used for years due to the mismanaged opportunity to appeal to customers of color.

Product boycotts and decreases in offending companies’ revenue are becoming more common as black Americans seek to let their dollars do the talking. But in the meantime, many stand by wondering what could have possibly provoked well-known companies to produce campaigns that demonstrate so little concern for cultural sensitivity.

“We currently live in a very racially charged climate, and I am a firm believer that if you don’t understand the importance of creating quality content without offending others now, you never will,” said Stephanie Caudle, founder of Black Girl Group, a micro-job site that connects African-American women freelancers to companies that are struggling to create content for African-American audiences.

It doesn’t take long to figure out the source of the issue. The reason so few companies produce materials with culturally sensitive displays is because companies aren’t really very diverse. A look at the higher ranks of marketing at many of the top companies reveals very few black marketing executives. The last few years have shown us that black Americans — women in particular — are a driving force in regard to both purchasing power and trendsetting. But because they are often underrepresented or not represented at all within the upper echelons of these agencies, materials continue to be produced that don’t acknowledge these facts.

Caudle, who has worked in marketing and advertising for over 10 years, believes the recent marketing snafus were more insensitive than offensive, and that they reflect shallow attempts at industry diversification — and the data supports her on the latter.

“According to the Bureau of Labor Statistics, of the 582,000 Americans employed in advertising and communications in 2014, less than half are women, 6.6% are black or African-American, 5.7% are Asian and 10.5% are Hispanic.”

There are fewer than 100 black female executives in advertising, PR and related industries in the U.S.

The lack of diversity in the industry makes responsible content difficult to achieve, and it can only be remedied by changing the numbers.

“Given some of the horrible mishaps [as mentioned above], companies are in desperate need of more diversity at their tables, and I am here to bring it. African Americans only make up 5 percent of advertising professionals, and if we don’t have more African Americans working for these major companies creating the campaigns seeking to ‘appeal’ to African American audiences, they are going to continue to get it wrong,” Caudle continues.

Lack of diversity is an issue that comes up on all sides of the industry. Simone Pratt, senior brand strategist at Saatchi & Saatchi Wellness, has been on the agency side of advertising for 20 years. In that time, she has seen many of the perils black women face in marketing. And while she has been on the ‘other’ side of the table, she’s experienced many of the issues black women share in other industries.

“There is always the conundrum of being one of the only black women at a table, and if you are passionate or push back, you feel you may be viewed as the ‘angry black woman,’” explained Pratt. “I have been told to 'calm down' when I am passionately expressing my views ... A man or man of color would never be told that.”

Caudle has had similar experiences in how companies perceive her as a black woman. “As a black woman in marketing, I often feel as if I have to scale back my passion in fear of being deemed aggressive. I have often been in rooms and the moment I become vocal is the moment people tell me that I need to 'scale it back'."

The collective knowledge of black women is often ignored or suppressed in the need to assimilate. When black women are lucky enough to be ‘at the table,’ they're often discouraged from full engagement. The prejudices and bias that come with being one of few black faces in a crowd have an effect on the delivery of ideas by black women. Pratt says she doesn’t talk the same way she did in the past for fear of being labeled. “Now I am at a general market agency, and often the only black person and black woman in the room. I feel I want to be heard and carefully choose my words so the room hears me and not ... through the lens of their unconscious or conscious bias,” she said.

The climate of the advertising industry can be emotionally taxing on black women. Pratt says she spends a lot of time having to correct others who use insensitive language. “I work in an industry where being ‘hip’ is table stakes. So people push the envelope with language,” she says. “I have been in meetings where people say that something unorganized is ‘ghetto’ or use very colloquial language … and call it ‘brand planning dirty.’ All these examples I have called people out and create awareness of what is offensive."

Pratt also brought up a perspective many hadn’t previously considered — that many organizations are well aware of the offensiveness of their brand and may intentionally ruffle feathers for wide-scale attention. She refers to agencies that intentionally produce provocative and appropriative material with no desire to understand the culture as "brand blackface." After becoming fed up with companies that take this shallow approach, Pratt began calling brands and agencies out on Twitter for their offenses.

“There are a lot of agencies that create work for provocation sake or appropriate from our culture. I came up with the term [brand blackface] because similar to blackface in vaudeville, some brands are inauthentic in their borrowing from our culture not for celebratory purposes but for a laugh. Like all the brands who used ‘fleek’ and it did not match their brand DNA (i.e., iHop),” she explained.

Overlooking the cultural significance of terms and images can be hurtful to communities of color. Furthermore, it’s particularly essential to acknowledge their influence on children’s identity development. Children are affected and influenced by the images they see in the media. Over the last few decades, various studies have shown how advertising can lead to lower self-esteem in kids. Historical research like the famed “Doll Test” first conducted by Kenneth and Mamie Clark has shown how children learn to associate lighter-skinned dolls with beauty and positive attributes, and darker dolls with negative concepts. This experiment has been recreated several times in the last few decades and the findings are heartbreakingly similar.

Irresponsible attempts to connect with the black community perpetuate this tradition.

“When people of color are not celebrated and seen as authentic, fully dimensional beings, we have the doll experiment being done recently and having the same results as in the 1940s," Pratt said. "Commercials are reflective and a microcosm of our culture and lives. They are only 30-60 seconds, but they are a two-way conversation with brands, and they build relationships with us."

Caudle shares a similar perspective when emphasizing how perceptions in marketing can influence widescale public perceptions of communities of color. “At the end of the day, marketing/advertising contributes to some of the systemic racism issues we have in America thanks to programming, and if marketing efforts continue to lack diversity, the perception of communities of color will continue to be either skewed or one-sided.”

By 2020, black buying power is projected to reach $1.4 trillion and is well on the path to being the largest racial minority consumer market. Companies that choose not to prioritize the needs of the community will be the ones to come up short. In 2016, Nielsen released a report called “Increasingly Affluent, Educated and Diverse: African-American Consumers” that discussed the widescale purchasing power in the black community. The demographic’s increased education and finances are among the reasons black Americans have become a must-watch force for companies. If you spend a moment thinking of the most popular hairstyles, verbiage and attire, they typically have some level of origination from black culture. Research has indicated that black youth have an unprecedented capacity for trendsetting and drawing in the attention of other minority youth.

Increased exploration of the levels of diversity in companies is prompting agencies to do more to recruit women of color — and that’s great. But as corporate America does its best to change the demographics, it’s important to hire black women for the right reasons. “Before stepping into new roles, you have to be sure that these companies are really intentional about their recruitment and not just recruiting women of color because it sounds or looks good,” said Caudle.

Both hiring and targeted messages have to be authentically tailored for the black community. In a piece by Janie Boschma for the Atlantic, Cheryl Pearson-McNeil, coauthor of the report and Nielsen’s senior vice president for strategic community alliances and consumer engagement, had the following to say about the importance of effective customer engagements: “[T]hose ads have to be culturally relevant and nuanced. Hiring a black model for the sake of diversity isn’t going to cut it without also incorporating smart messaging through a broader engagement strategy.”

The lack of black Americans — women in particular — involved in the decision-making process will have significant effects on companies’ ability to convert sales and understand key markets. But more importantly, misguided efforts to reach the black community pose the risk of negative messaging for developing minds of all races. Through diversification, the marketing industry can gain integrity and make steps toward the future. Black women are more than willing to do the work it takes to make an impact. Now it’s up to companies to make the change.