Trump won the war on Christmas! Now he laughs at global warming

Over the holiday weekend, Trump made clear he believes two of the dumbest lies of all time. Is he fit for office? 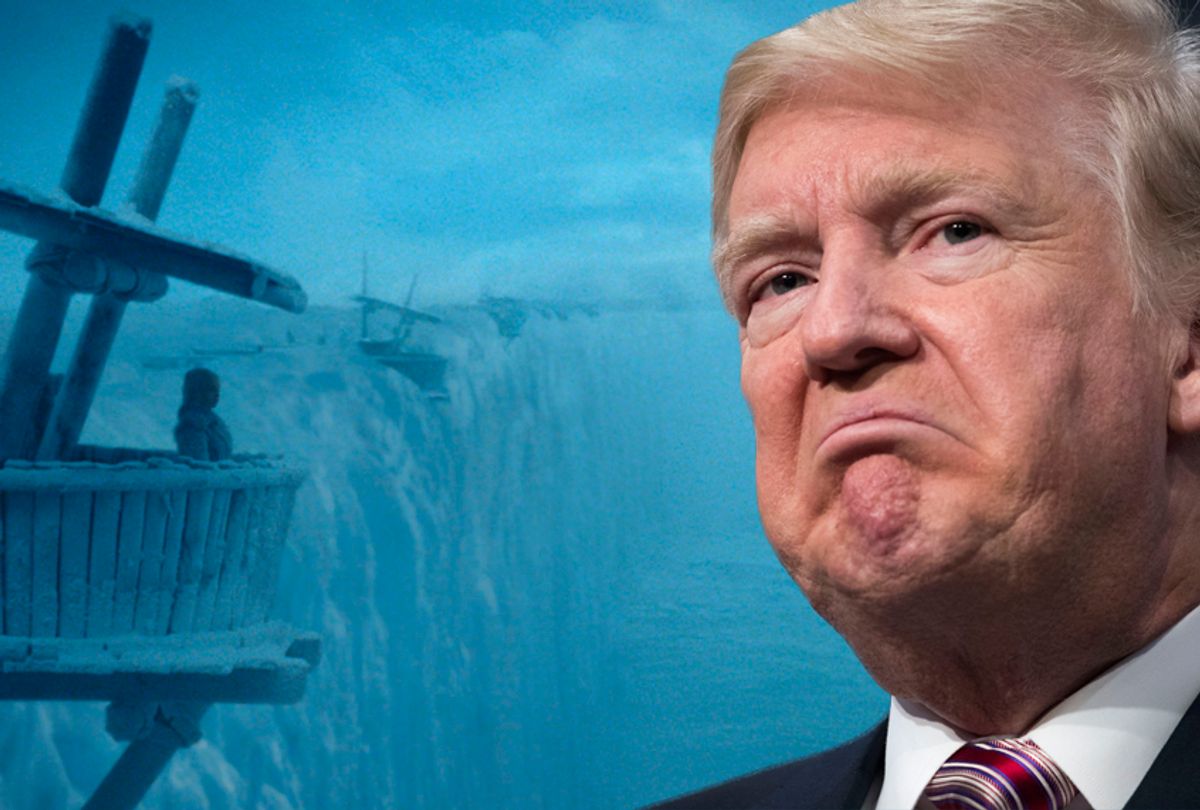 Back in 2005, 15 years after a Florida woman named Terri Schiavo slipped into a persistent vegetative state due to cardiac arrest, congressional Republicans suddenly attained the miraculous diagnostic skills to accurately evaluate Schiavo’s physical health from 900 miles away.

Among the Republican leadership, Bill Frist, who was then the Senate majority leader, decided that Schiavo could somehow snap out of her torpor. So efforts by Schiavo’s husband to remove his wife’s feeding tube, in accordance with her wishes, became a political hot potato. Everyone in the GOP caucus suddenly possessed advanced degrees in neurology, insisting that Schiavo was moments away from recovery and shouldn’t be allowed to die with dignity. Republicans also abandoned their small-government conservatism, choosing instead to inject themselves into the Schiavo’s family affairs -- almost literally invading her hospital room and seizing control over her health care. Their efforts were ultimately unsuccessful and Terri Schiavo died on March 31, 2005.

The takeaway from this mortifying political exploitation of a deeply private medical crisis was that we probably shouldn’t diagnose anyone from miles away. Likewise, the Republicans would do well to keep their not-so-small government meddling to themselves. It’s for these reasons, in addition to the fact that I don’t have much more than a handful of college credits in psychology, that I’ve resisted the temptation to diagnose whatever the hell is wrong with President Donald Trump.

While I’m completely unqualified to evaluate Trump’s mental health, especially from a distance, we’re clearly entering a phase of his presidency in which someone -- anyone with a reasonably strong reputation and expertise in the field -- should take a close-up, first-hand look at the president because his burger appears to be slipping off his bun. As citizens we have a right to question his fitness for office, and the 25th Amendment provides a convenient means for temporarily -- and perhaps permanently -- removing a chief executive from his post due to one or more incapacities.

Why discuss this now, as opposed to any other occasion since Trump's inauguration? During his holiday break, the president tweeted two items that we should probably take a little more seriously, given his access to the most destructive military arsenal in human civilization. It turns out that Donald Trump not only thinks the“war on Christmas” is real, he also believes the old trope that just because it’s cold somewhere, the climate crisis must be a hoax. We’ll start with this Christmas Eve tweet:

We could spend hours debunking the “war” myth, but as Christopher Hitchens once said, "What can be asserted without evidence can be dismissed without evidence." Suffice it to say that the whole “war on Christmas” began as a Bill O’Reilly fever dream -- another perennial Fox News joke foisted upon easily-outraged boomer retirees who won’t be happy until America returns to Jean Shepherd’s post-war utopian vision of a Red Rider yuletide. That aside, such a verifiably ridiculous statement ought to terrify every American, considering that Trump, the ostensible leader of the free world, not only believes in an obvious Fox News myth, but he also believes he helped to defeat the invisible enemies of, you know, a holiday.

Consider this for a second. Trump, who’s shrouded in immense power, thinks he’s the conqueror of enemies who don’t exist in the context of a war that also doesn’t exist. He might as well have watched “The Lord of the Rings” on TNT and insisted via tweetstorm that Denethor is being treated unfairly by Crooked Gandalf! Maybe we’ll have to use Wraiths and cave trolls to attack the Fellowship with fire and fury unlike the world has ever seen. So sad.

Not to overstate the obvious, but the president is making public statements in support of, literally, fake news, while taking credit for his gallant participation in the fakest of all fake news event in recent memory.

To make matters worse, Trump went on to repeat another myth, this one borrowed from professional doofuses like Sean Hannity, Matt Drudge and Steve Doocy.

Trump, along with, apparently, millions of Fox News viewers who buy this gibberish, seem to overlook the fact that “the East” isn’t the globe. Just because it’s snowing in Boston or below freezing in Washington -- in the middle of winter, no less -- doesn’t mean it’s simultaneously cold everywhere, including the Southern Hemisphere, where it’s currently summer and where in Australia they’re witnessing record heat. Furthermore, areas of the Northern Hemisphere outside of North America are experiencing warmer than usual winter temperatures.

All in all, 2017 was the second warmest year on record, and the climate crisis doesn’t preclude the possibility that certain regions of the globe will experience extreme cold. The southward slippage of the polar vortex, for example, is the consequence of climate change interfering with the jet stream, which usually holds the vortex in place. Such details don’t matter to easily misled people like Trump, who are ignorant enough to believe that the weather in their backyards is indicative of worldwide climatological conditions.

The president believes in outright myths and he’s willing to attach his name, as well as the office of the presidency, to two of the biggest doozies in modern history. But we’ll leave an official diagnosis to the doctors at Walter Reed where, apparently, Trump’s health will be evaluated on or around Jan. 12. Honestly, I’m more willing to believe in a “war of Christmas” than I am to believe that Trump will actually attend his government physical or, if he does, that the results will be authentic. Nevertheless, a licensed physician rather than Trump’s hand-picked Doc Brown in New York ought to provide us with our first real glimpse into the president's actual wellness. We might even get a sense of whether he’s gone bye-bye mentally. Who knows what this will portend for the New Year, but there it is.

Yes, our president is so far gone that he appears to seriously believe in Fox News tall tales and propagandized trickery. Until we hear from medical experts who can diagnose Trump up close to determine his current fitness for office, we can only hope there are reasonable people with the capacity to prevent him from acting on his demented whimsy and bellicosity directed against his perceived enemies -- invisible or otherwise.