America's imperial decline may be best hope to save democracy

Painful as it will be, it's a necessary precondition to creating a more just country 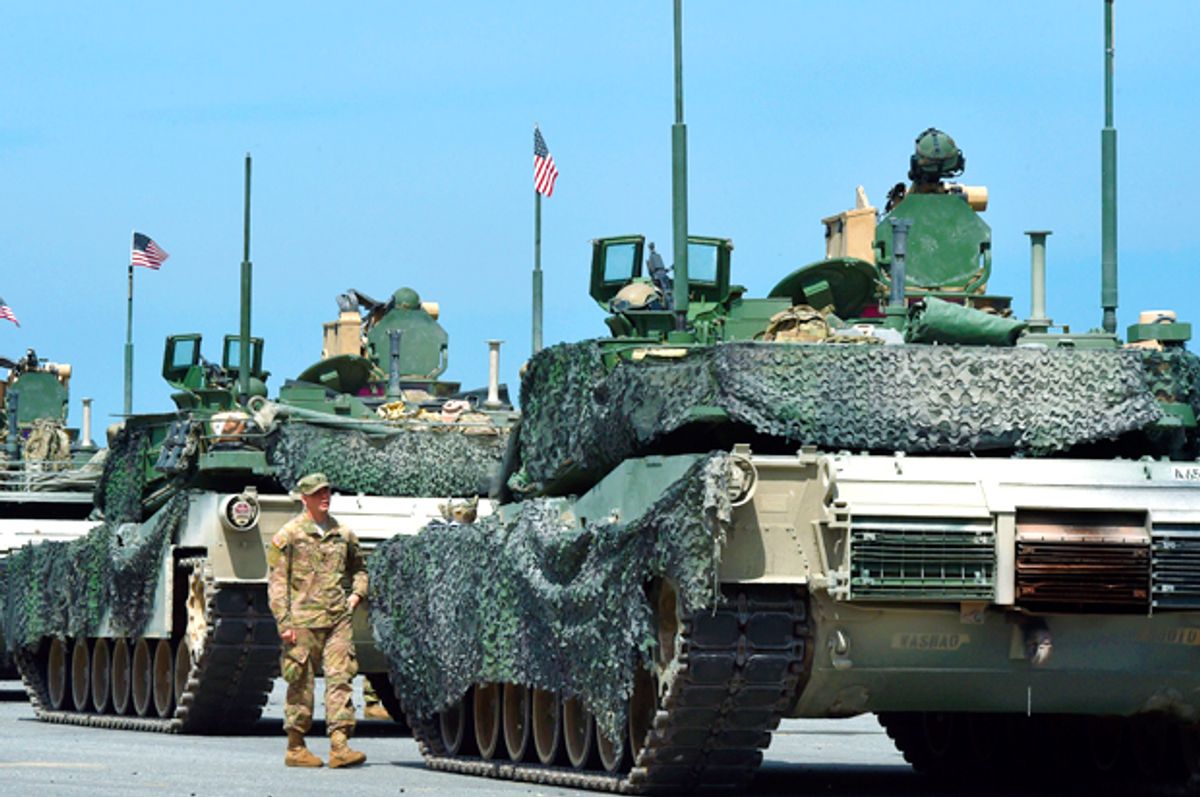 When the United States vetoed a United Nations Security Council resolution asking nations not to build any more diplomatic missions in Jerusalem only to be drubbed 128-9 in the General Assembly, which voted on a similar non-binding resolution last week, America’s ambassador to the UN, Nikki Haley, loudly proclaimed that the United States would be “taking names.” Her warning fell on deaf ears, although the U.S. and Israel did manage to cajole that titan of geopolitics, Guatemala, to come around to the American view.

The whole pitiful episode merely confirmed what the Trump administration has made readily apparent: Haley, like the president, has internalized the same impossible tale conservatives have been selling to Fox News grandmas for decades now: that the U.S. is a font of beneficent foreign aid; that the State Department outspends the Pentagon; and that billions and trillions in cash flow ever outward from our vaults and into the greedy hands of ungrateful minor nations that would sink without it. They think, in other words, that we have leverage where we do not.

When the UN announced a reduction in its budget for next fiscal year — something commonplace and long in the works — the U.S. government crowed that this was its doing. No one cared. But in an odd way, combative and stupid as they are, Trump and his circle intuitively grasp something that the mandarins of America’s post-war foreign policy consensus either won't or can't: that the institutions the United States built in order to camouflage and maintain its worldwide empire are increasingly unresponsive to the imperial will. In this respect, their strident nationalism is partially, if accidentally, correct. We ain’t what we used to be.

While our commuter trains leap from their aging tracks, tactical victories in the so-called war on terror produce not a glimpse of distant victory but only the enervating glimmer of a long-strategic defeat. The already barely tolerable oligarchy of late 20th-century capitalism has given way to a high-tech feudalism of the darkest speculative fiction, ruled by a tiny global class of billionaires — soon, probably, to include trillionaires — as its once-comfortable middle class stagnates and rising sea levels threaten its coastal cities, not to mention those of the rest of the world.

The American Empire shepherded the world to this point, sometimes clumsily and sometimes accidentally, but most often deliberately. The project of global dominion, of commercial leverage, of seeding client states with “S.O.B.s, but our S.O.B.s” was a project of very bad but very capable men. They knew what they were doing. Maybe American imperialism was once spoken of in hushed tones, but then some dummy in the Dubya era went and said it out loud: “We’re an empire now; we make our own reality.”

But empires don’t really make reality; they revolve around it like a planet around a star, and even their relatively minor gravity makes the star wobble. Now no one is very shy when talking about America as a center of imperial power and ambition, a global economic and military hegemon with almost 800 military outposts scattered across the world and concentric rings of omnipresent planes, drones, and satellites overhead — a vast network of industrial and financial influence, the world center of a pop culture that produces not only global taste but maintains English as the global lingua franca. Ironically, this new openness about empire coincides with the deepening sense that the empire itself is now in a state of inexorable decline.

The loss of global respect and prestige seems to stick particularly in the throats of centrist liberals and the Beltway's tiny clutch of moderate Republicans, hashtag-resistance sorts who consider Trump an appalling Caligula, a grotesque called into being by the fevered prejudices of the less educated corners of their nation, or else willed into existence by the Odoacer of our little Roman drama, Vladimir Putin. They pine for Obama, a man who always seemed to imagine himself a kind of Eisenhower; he uttered all the correct soothing phrases, and he didn’t fart and gallivant like a toddler when called upon to perform on the world stage. They want the quiet order of Bretton Woods and the G20, balmy joint declarations and hot wars all around the Eurasian periphery that never cause us to break a sweat. They want national prestige. This is why the whole Jerusalem-at-the-UN debacle so upset them: not because they especially care about the status of Jerusalem, which the U.S. has been fecklessly proclaiming the “eternal and undivided” capital of Israel for decades now, nor because they give one iota about Palestinians, but because they believe, in a strange reflection of the maddest madmen of the GWB era, that appearance is reality.

Trump throws these absurdities into stark relief. An aging creature of pure id, he doesn’t know or care enough to hew to genteel fictions. The decline of America’s ability to bend its traditional clients to its will and whims was already evident under Bush Junior when he failed to cobble together a truly international coalition in Iraq. Obama plainly knew it and hoped to slow the entropy; his internationalism, his “pivot to Asia,” his long-term military priorities were all attempts to staunch the bleeding, but his inability to really extricate the country from its Middle Eastern and South Asian quagmires — not to mention domestic opposition from a GOP whose leaders failed to recognize him as a potential ally, and who sealed their own irrelevance by turning to a ravenous and deeply racist base — doomed his presidency to painting around the edges.

Trump practically wandered into the Oval Office, his reality-show campaign aided and abetted by his predecessor's forceful favoring of finance over his indebted citizenry, and the most incompetent Democratic presidential campaign imaginable. Obama alumni and Clinton dead-enders view Trump as an extraordinary outlier. “This,” they keep saying, “is not normal.” But Trump is just the natural end result of decades of policy — not an aberration, but an apotheosis. He represents a heretofore invincible society recognizing that something is distinctly not right.

The opposition to Trump has divided into two camps: one that pines for a reversion to the mean, a painless transition back to incrementalism at home and see-no-evilism abroad; and another that recognizes the very rot that let a man who is both Fool and Lear in one howling figure stumble into the presidency. This latter faction, which ranges from the modest social democracy of Bernie Sanders to a far more radical and openly anti-imperial left, sees in the present crises an opportunity to wrench back some kind of national democracy from imperialism. It sees the fact that the United States has, for nearly two decades now, spent $250 million a day on war as both a crime and an opportunity to redirect those resources. (To put that figure in perspective, it would be enough to operate a modest regional hospital for a year.)

In the broader sense, this corner of the opposition, the folks who are organizing at the street level, writing about the failures of post-recession economic policies and talking about truly universal healthcare, recognizes that while even a carefully managed decline will mean real pain and dislocation, it represents a necessary precondition to the construction of a fairer, better, more just country than the one we have. It understands that the militarization of police and the financialization of the whole economy are inextricably linked with a militant and aggressive foreign policy and an endless succession of debt-financed wars. It suspects, in fact, that the desperately tragic gun violence in America is at least as much a product of the desensitizing march of military violence, the endless production of movies and television glorifying a national policy of vigilantism, war, and death, as it is of the problematic availability of guns; that even the reemergence of an impolite racism is in some ways tied to the necessary production of terrifying foreign others to justify endless foreign conflicts.

Every bit of power retained by the old consensus, which despite its seeming slide into abeyance retains a tremendous amount of institutional influence, will ultimately marshal itself to combat any turning away from our status as the One Indispensable Nation. They’re gonna tell you that a hegemonic China will...well, do something very bad, that Putin is hiding in your closet, that the US has some actual interest in resolving the Israel-Palestine conflict; and that only the U.S. can resolve it. They’re gonna tell you that unless Tim Kaine wins in 2020, Donald Trump will disband the, uh, CIA. They’re gonna use a subtler but no less dangerous language of cultural dissipation to warn that any relative decline in America’s global position will mean the end of it all. They’re wrong. Comrades, why can’t it be a beginning?