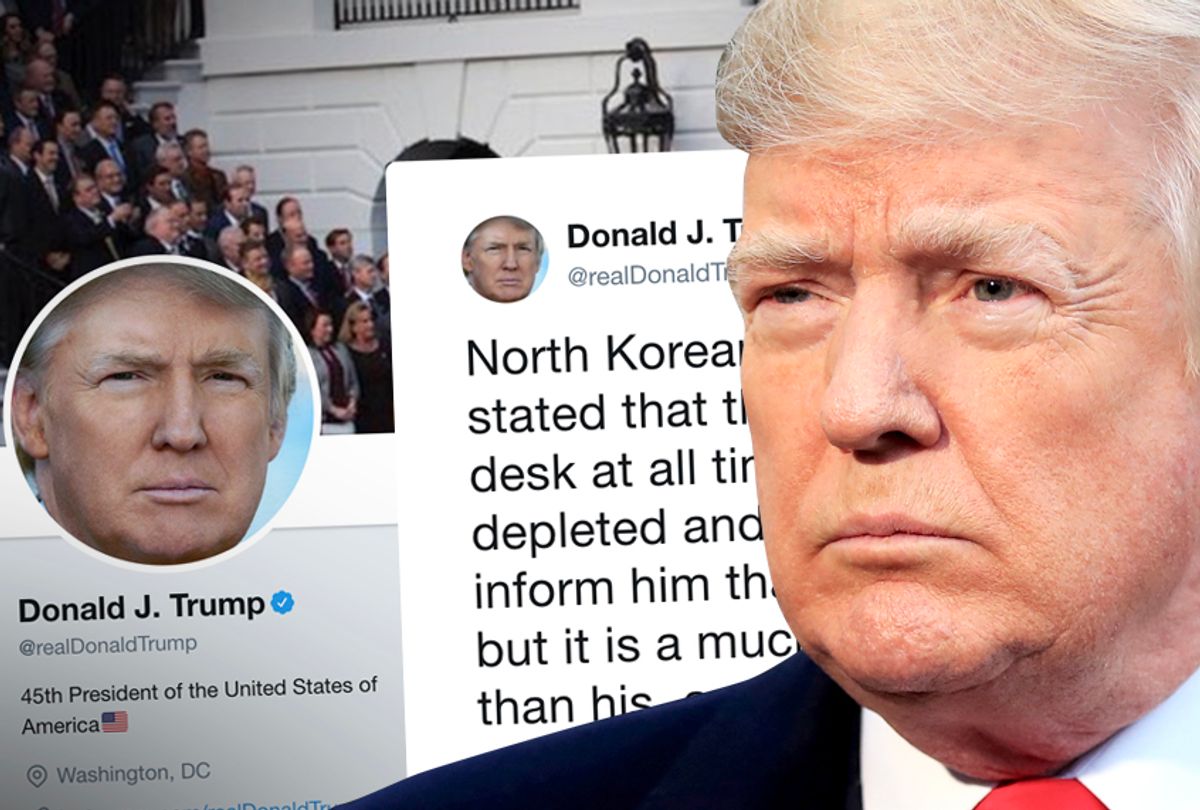 Donald Trump began 2018 in much the same manner as he spent most of the previous year. On Tuesday, Trump lied, ranted, raved, claimed credit for things he hadn't done, threatened his political enemies with prison, claimed the news media are treating him unfairly and engaged in phallocentric nuclear brinksmanship with the leader of North Korea. All of that on Twitter, of course.

The response to Trump's antics were predictable.

Liberals, progressives and other reasonable people were shocked and dismayed at Trump's behavior. They took Trump's latest Twitter outburst as more evidence that he is mentally unstable, a national embarrassment, a threat to world peace and an insecure man-child. Republicans and other conservatives were for the most part silent or, as is their habit, made excuses for Trump's behavior.

Members of the professional chattering class and commentariat made obligatory statements of outrage and concern but were not-so-secretly excited and pleased that Trump's outrageous behavior continues unabated in the new year. Trump is a gift for anyone who has to write or talk about American politics for a living.

Nevertheless, a hard fact remains. Those Americans who are offended or angered by Trump's behavior, or who find it dangerous and shameful, are not his audience. He performs for his base. He has no interest in being a president for all Americans. Trump's appeal is tribal and emotional. Ultimately his crudeness -- be it his bragging about assaulting women, his embrace of overt racism and white supremacy, his threats of violence, his misogyny, his boasting about his penis or his boorish ignorance -- is an asset rather than an impediment in terms of winning the White House and keeping his voters in thrall.

In one of the most insightful and prescient essays about the rise of Trump, Joan Williams explained this dynamic shortly before the 2016 presidential election. Writing at the Harvard Business Review, she observed:

For months, the only thing that’s surprised me about Donald Trump is my friends’ astonishment at his success. What’s driving it is the class culture gap.

One little-known element of that gap is that the white working class (WWC) resents professionals but admires the rich. Class migrants (white-collar professionals born to blue-collar families) report that “professional people were generally suspect” and that managers are college kids “who don’t know shit about how to do anything but are full of ideas about how I have to do my job,” said Alfred Lubrano in "Limbo." Barbara Ehrenreich recalled in 1990 that her blue-collar dad “could not say the word doctor without the virtual prefix quack. Lawyers were shysters … and professors were without exception phonies.” Annette Lareau found tremendous resentment against teachers, who were perceived as condescending and unhelpful.

Michèle Lamont, in "The Dignity of Working Men," also found resentment of professionals — but not of the rich. “[I] can’t knock anyone for succeeding,” a laborer told her. “There’s a lot of people out there who are wealthy and I’m sure they worked darned hard for every cent they have,” chimed in a receiving clerk. Why the difference? For one thing, most blue-collar workers have little direct contact with the rich outside of "Lifestyles of the Rich and Famous." But professionals order them around every day. ...

Hillary Clinton, by contrast, epitomizes the dorky arrogance and smugness of the professional elite. The dorkiness: the pantsuits. The arrogance: the email server. The smugness: the basket of deplorables. Worse, her mere presence rubs it in that even women from her class can treat working-class men with disrespect. Look at how she condescends to Trump as unfit to hold the office of the presidency and dismisses his supporters as racist, sexist, homophobic, or xenophobic. ...

Manly dignity is a big deal for working-class men, and they’re not feeling that they have it. Trump promises a world free of political correctness and a return to an earlier era, when men were men and women knew their place. It’s comfort food for high-school-educated guys who could have been my father-in-law if they’d been born 30 years earlier. Today they feel like losers — or did until they met Trump.

For Trump's human deplorables, it is neither reason nor a desire for good governance and stewardship that guides their political decision-making, but rather spite and contrariness. For them, any criticism of Trump by "outsiders" (captured by the empty, catch-all phrase "political correctness") is more reason to rally behind the great leader. This is the logic of a cult.

Trump's use of Twitter and other media is also strategic. As cognitive linguist George Lakoff explained to WNYC radio's "On the Media" last year, his tweets serve the following purposes: preemptive framing, diversion, deflection and trial balloon.

Through preemptive framing, Trump takes control of an issue and drives the narrative around it. He is on the offense; his enemies are perpetually on the defense. Deflection works by attacking the source of any criticism as "unreliable," "biased" or "fake news." The trial balloon allows Trump to casually introduce new ideas as a means of testing the public's reaction to and tolerance for his breaking of existing political norms and democratic traditions. Diversion is one of Trump's most effective tactics, where he and his allies introduce new controversies and seemingly unrelated topics to draw attention away from issues such as the Russian collusion scandal.

On Wednesday's episode of "Meet the Press," Lakoff contextualized Trump's most recent use of diversion and deflection on Twitter:

He’s a master salesman, he’s been at it 50 years. Everything he does is strategic to sell himself, to market himself, and this is one way that he markets himself by controlling the media. ... Right now, President Trump is in a noose. ... It’s the money laundering noose that’s tightening around his neck. ... The whole thing is distracting from money laundering, and from the fact that [Georgian-American businessman Ike] Kaveladze has been summoned both by [Robert] Mueller and by congressional committees.

One underestimates Trump's deep base of support at one's peril. Trump knows his public and how to keep them engaged, aroused and politically agitated. For all the talk about Trump's declining poll numbers and "softening" approval among his base, he commands tens of millions of Americans. Drunk on racism, spite and the toxic allure of fascism and authoritarianism, they are an ominous silent quasi-majority. It is not democracy that matters to Trump's voters and other Republicans. Rather, it is winning at any cost which motivates them. They view politics as a sport; they are its hooligans.

When Trump sends out his missives on Twitter, liberals and progressives retreat to the fainting couch in shock. Trump's base instead hears the trumpets of battle. In a contest between the two camps it is clear enough who will win.