Does regulation kill off business profits, as Trump claims? Not at all

Republicans want us to believe Dodd-Frank financial regulations slow economic growth, but the opposite may be true 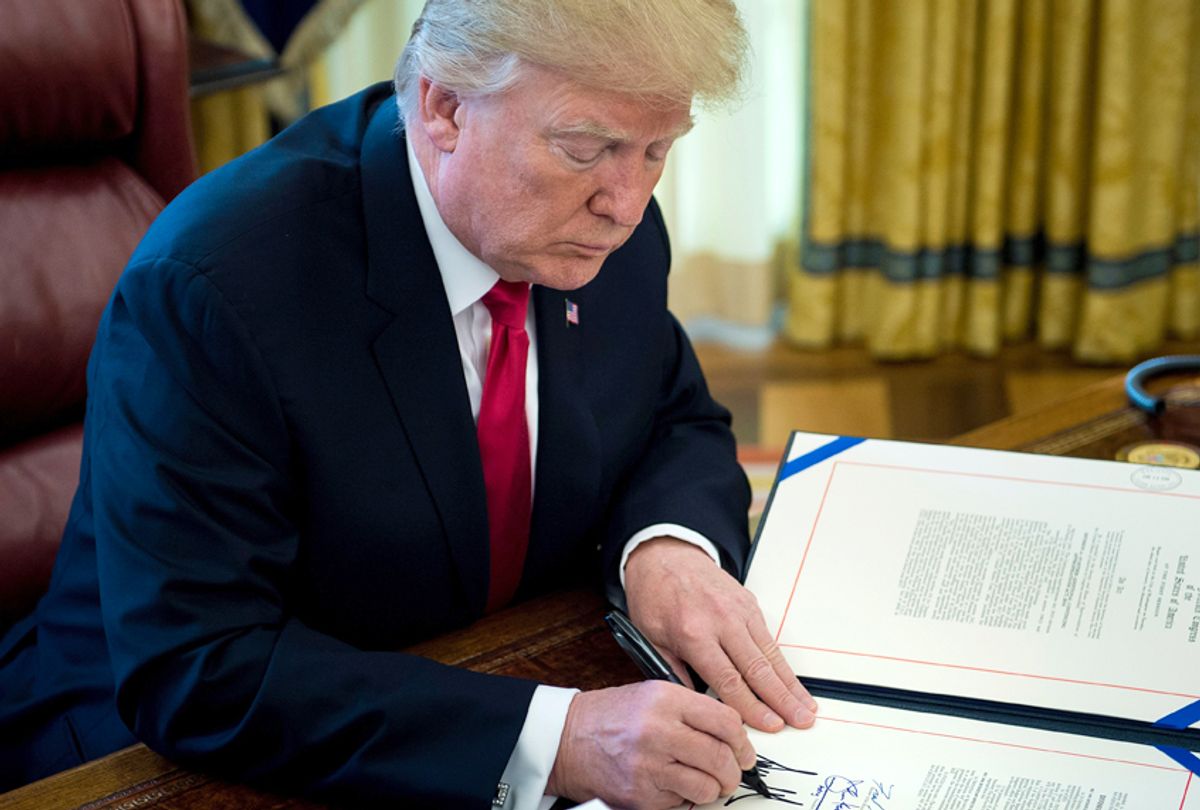 Despite some opportunistic posturing during the campaign about Wall Street "getting away with murder," Donald Trump's first year in office has been marked by an eagerness to help bankers hide the bodies. Trump's administration has embraced a broad anti-regulation agenda, looking for ways to reduce oversight of banks and to pressure regulating agencies to reduce enforcement of the law.

“I have so many people, friends of mine, with nice businesses, they can’t borrow money, because the banks just won’t let them borrow because of the rules and regulations and Dodd-Frank," Trump announced in February, when he signed an executive order aimed at drastically scaling back the reach of the 2010 Dodd-Frank Act, which was established in the wake of the 2008 financial collapse. He also called the law a "disaster."

Trump is simply building on many years of Republican claims that Dodd-Frank is somehow bad for the economy, even though the opposite may be true. At any rate, the economy has become significantly more stable in the years since the law was passed.

Treasury Secretary Steven Mnuchin has claimed that the bill is "way too complicated and it cuts back lending."

But a new working paper from the National Bureau of Economic Research, written by University of Chicago researchers João Granja and Christian Leuz, supports the opposite contention: Stricter regulation can, in many cases, improve lending activity and benefit the economy.

Granja and Leuz looked at a narrow section of Dodd-Frank that ended one regulatory system, which had been deemed overly lax, with a system that subjected many banks to more supervision over the ways they assessed and managed loans. It was a move that regulation skeptics feared would discourage small business lending, but Granja and Leuz found "little evidence that stricter supervision led to a credit crunch." Instead banks, on average, increased "their lending to small businesses following the regulatory transition by approximately 10 percent."

“Forcing these banks to clean house is unclogging the lending channel somewhat," Leuz told Salon, explaining their theory as to why this worked. “This is an instance where we see that stricter supervision isn’t necessarily bad for lending and, in certain circumstances, such as this situation, can lead to quite substantial increases in lending.”

It's tough for economists to directly study the effect of these dramatic regulatory shifts, Leuz explained, because they often come in direct and immediate response to a crisis, making it hard to separate one effect from others. But this regulation came into effect "well after the crisis," providing "a window into the effects of supervision."

To be clear, Leuz explained, the researchers are not arguing that regulators can come in and run banks better than bankers. Instead, it is more likely that "regulators prompt [bankers] to revisit their practices and their internal management, and that in turn is what leads to these changes and improvements, and that’s what leads to the increased and new lending that we see.”

This is just one working paper, and as always more research is needed. But these findings comport with another recently published paper by Atif Mian and Emil Verner of Princeton and the University of Chicago's Amir Sufi, which looked at the effect of different states rolling back banking regulations in the 1980s. While the states that deregulated more quickly did see an initial jump in economic growth, after the recession of 1990 those states took a much bigger hit on economic measures such as wages, housing costs and employment.

Of course, this kind of empirical evidence is helpful only insofar as critics of Dodd-Frank and similar banking regulations are arguing in good faith when they claim they want to help the economy. But Trump's comments about "friends of mine" likely strikes closer to the truth of what motivates so much animosity towards banking regulation. It's not really about the economy, but about the desire of wealthy and powerful men to operate exactly as they wish, without any outside accountability.

Economic analysis doesn't often have room to take such emotional factors into account, since they can't easily be measured. Trump's own career, of course, is a good example of how businessmen can be motivated by much more than a simple desire to make money. An economic analysis by the National Journal's S.V. Dáte demonstrates that if Trump had simply taken his fortune in 1982 and invested it in a S&P 500 index, he would be far wealthier than his wheeling and dealing in real estate, plus his shadier business ventures, have made him. But it's clear that Trump's desire to feel like a big man who makes deals and hustles for money counts for more than profit-and-loss to him. It's unlikely he would take that deal even if he had a time machine and could go back and do exactly as Dáte prescribed.

Still, research like this can help voters realize that Trump's simplistic hostility to regulation — not just banking regulations, but any kind of regulation — isn't really about economic growth, as he claims. Regulation, in and of itself, is a neutral factor. What matters is the quality of the regulations themselves and the willingness of the government to enforce them. In many cases, good regulation can actually spur on better business practices, not just shielding the public from risk but actually improving the economy for everyone.