New hope on the Korean peninsula, believe it or not

The two Koreas schedule direct talks to resolve the crisis, while the U.S. policy elite frets about a "wedge" 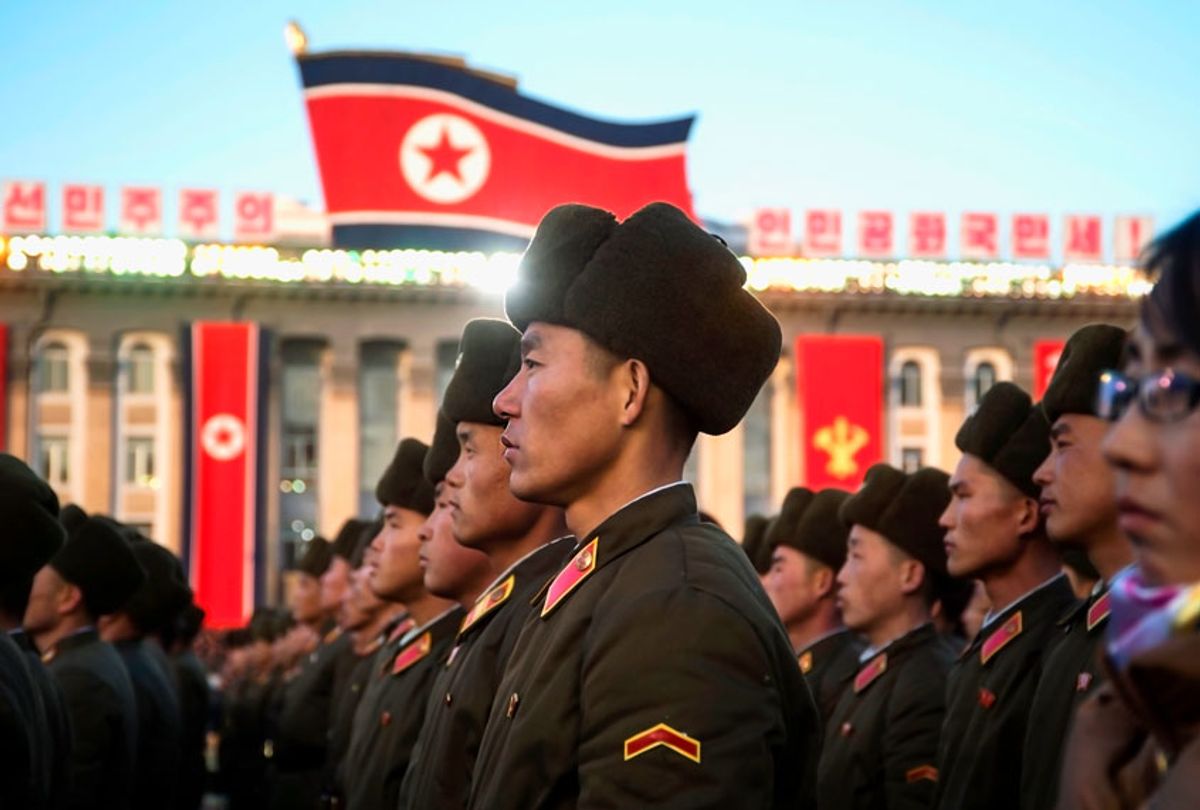 Brace yourselves for the week now beginning. A rapid succession of events over the past few days suggests that an outbreak of good sense may be imminent on the Korean Peninsula. We will know more this Tuesday, when North and South open direct talks for the first time in two years. The obvious outcome to hope for is a new start toward a sustainable resolution of the Korean crisis. At the moment this seems perfectly possible (and what a pleasure to write this sentence after a year of nuclear-charged anxiety that has us all on edge). A big turn in world affairs may be in the offing.

“Seems,” “may”: We must stay with the conditional verbs for now. Two reasons. One, the United States stands to lose its lead role should Seoul and Pyongyang take charge of their fates. And Washington is committed to countering any such development the world over, no matter what has to be sacrificed or however many the casualties. Two, if the past year has made anything plain as day, it is that peace in Northeast Asia is not on the U.S. agenda. Endless tension and “threat” are absolutely essential to the frame of Washington’s policy across the Pacific — where we have a security policy but no foreign policy, do not forget.

Watch for the spoiler, to put the point another way. This contemptible creature has made repeated appearances of late. It is a symptom of positive momentum, in my read. The emerging powers want peace and an orderly world out of nothing more exotic than self-interest; they seek to prosper without costly conflicts, arms races, unlawful interventions, covert operations and the like. But this drift in global affairs tends to leave the indispensable nation in isolation, arms races and various kinds of subterfuge being among its strong points. One can cite Ukraine and Syria as examples, but there is no need: The Koreas are now the spoiler’s ground zero. Warily must we watch this week’s events.

In brief they are these:

One supposes that is what the Trump administration was also trying to say last week, even if it came over as days of spluttering, posturing and backtracking.

“Perhaps that is good news, perhaps not,” President Trump messaged on Twitter after Seoul and Pyongyang agreed last Tuesday to talk. Nikki Haley weighed in shortly thereafter. “We won’t take any of the talks seriously if they don’t do something to ban all nuclear weapons in North Korea,” Trump’s dependably belligerent ambassador to the UN said. “We don’t think we need a smile and take a picture.” Our Nikki. By Thursday, something else. “Talks are a good thing!” the president tweeted.

It is satisfying to see the policy cliques in Washington tongue-tied and wrong-footed in this way — a phenomenon that occurs with increasing regularity — and I mean this for a good reason. It suggests that, one incident at a time, the rest of the world is forcing the U.S. leadership into the 21st century. There is no grace to it, but there is none to be had in Washington. This is how it is going to happen. We are fated to stumble into the new era.

There is no ground for wide-eyed optimism in last week’s rapid-fire events. We have little idea what either the North of South will want or have to give when the two delegations convene in Panmunjom. It appears they are looking for easily attainable goals as confidence-building first steps while leaving all contentious matters aside. Play games, open postal relations, authorize a few charter flights: This is standard procedure in the Asian way of diplomacy. But what follows now between the two Koreas, if anything, must remain uncertain. As just suggested, neither do we know what the spoiler may have in mind.

But the chances of a fruitful outcome are better than most of the press, the think-tank set or people such as Nikki Haley suggested last week. There are months of background to these apparently sudden developments, even if our media have failed to report a lot of it.

Most immediately, there is the North’s successful launch of its most powerful intercontinental missile last November. Readers will recall Kim’s comment afterward. “North Korea has finally realized the great historic cause of completing the state nuclear force,” he asserted.

Whether or not the North is now nuclearized or merely a big step closer to it is beside the point. In my view, there is a straight line between the November test, which plainly improved Kim’s confidence, and his New Year’s démarche toward the South. Kim said as much when he also mentioned, if figuratively, the nuclear button on his desk. As I argued in this space after the November test, the Trump administration’s bellicose threats made deterrence a matter of urgency. Kim now has it — his objective all along — and can act with greater self-assurance.

But we must go back further to grasp the fullness of the moment.

After Moon won the presidency last May, he betrayed a campaign promise when he allowed the Pentagon to proceed with the installation of a missile-defense system known as THAAD, its acronym. That was less a capitulation, as I read it at the time, than a tactically wise attempt to buy time (and probably to spare his presidency from American subterfuge). The THAAD program, which Moon has since suspended, was not the South Korean leader’s story.

Neither was the tough talk Moon indulged in at the time. Behind the screen of animosity, the new president was engaged in elaborate talks with the Chinese and Russians, who were exploring separate tracks toward a resolution on the peninsula. In Beijing, Moon discussed reviving the six-party talks the Obama administration canceled in 2009 — the format that put China, Russia, South Korea, Japan and the United States on one side of the table and North Korea on the other. With the Putin government, Moon mapped a remarkable plan to integrate the North into a wide variety of resource, transport and industrial projects that would develop North Korea and the Russian Far East while removing the North as an impediment in South Korea’s connections to the Asian landmass.

No, you have not read much about these developments in the American press — they are far too interesting and run counter to the hostility Washington favors. And there is little question much of this will come up in Panmunjom this week. But after the session at the 38th parallel and after the February Olympics, the honorable work the Moon government did to prepare for this moment is the best indicator we have, at least for now, of what a successful outcome might look like.

I suggest this for a couple of reasons. Most immediately, the Koreans have used Olympic competitions to good effect numerous times in the past. The North Koreans came surprisingly close to attending the Summer Olympics when Seoul hosted them in 1988, and that was when the South still endured military dictatorships. In 2000, when Kim Dae-jung was president, North and South athletes competed as two nations but marched as one at the Sydney games; they did the same in Athens four years later.

More broadly, Moon and Putin appear to be playing a wise card in shaping a plan to integrate the North Korean economy into theirs, for the North has signaled its desire to modernize on numerous occasions. In 2002, when KDJ’s sunshine policy was shining brightly, the jointly developed Kaesong industrial complex opened on North Korean soil. Kaesong’s history was up and down, but it closed permanently only in 2016, when the conservative Park Geun-hye, then president, shut it down in response to one of the North’s missile tests. In the same vein, Kim Jong-un’s father, Jong-il, was famously impressed when he toured China’s reforms during a 2010 visit, and Jong-un, then a 26-year-old tagalong, has since acknowledged that he was, too.

A revival of the six-party format, an on-the-ground plan to inject KDJ’s sunshine policy with steroids: This is what South Korea, working in concert with China and Russia, appear to have on offer. The promise is unmistakable, even if the uncertainties are, too. In the next paragraph I will describe in detail what Washington has developed by way of an imaginative, constructive strategy to bring the Korean crisis to a sustainable conclusion.

Nothing. Unless one counts carrier groups off North Korean shores, nuclear-capable bombers running sorties over the peninsula, and the president’s bully-in-the-playground nonsense, nothing more.

Over the past year, Washington has displayed a peculiar obsession with “wedges.” Much of what others do seems intended as nothing more than the driving of wedges between America and its friends. When Beijing overcame its vigorous objections to the THAAD system and opened talks with Moon last spring, this was no positive turn with the potential to promote stability in Northeast Asia. It was China’s worrisome effort to drive a wedge between Seoul and Washington. It is the same now: Kim and Moon are not about to launch a possibly momentous search for peace; Kim is merely trying to drive a wedge, once again, between South Korea and the U.S.

There is something to learn from this matter of wedges. It is the extent of American myopia. Nothing in the world seems to occur that does not have the U.S. at the very center of its intended effect. It is not a winning perspective on events, to state the obvious. Nobody has to bother driving wedges between America and the rest of the world (and far fewer people want to do that than many Americans assume). The policy cliques in Washington get this done with perverse efficiency all by themselves. Our great nation’s creeping isolation is our own doing. Let us see if what now transpires between the Koreas worsens this condition.