Real Housewives of the White House: Will the Trumps make Steve come crawling back?

Steve went too far; will Don Jr. and his dad ever take him back? Problem is, this reality show is all too real 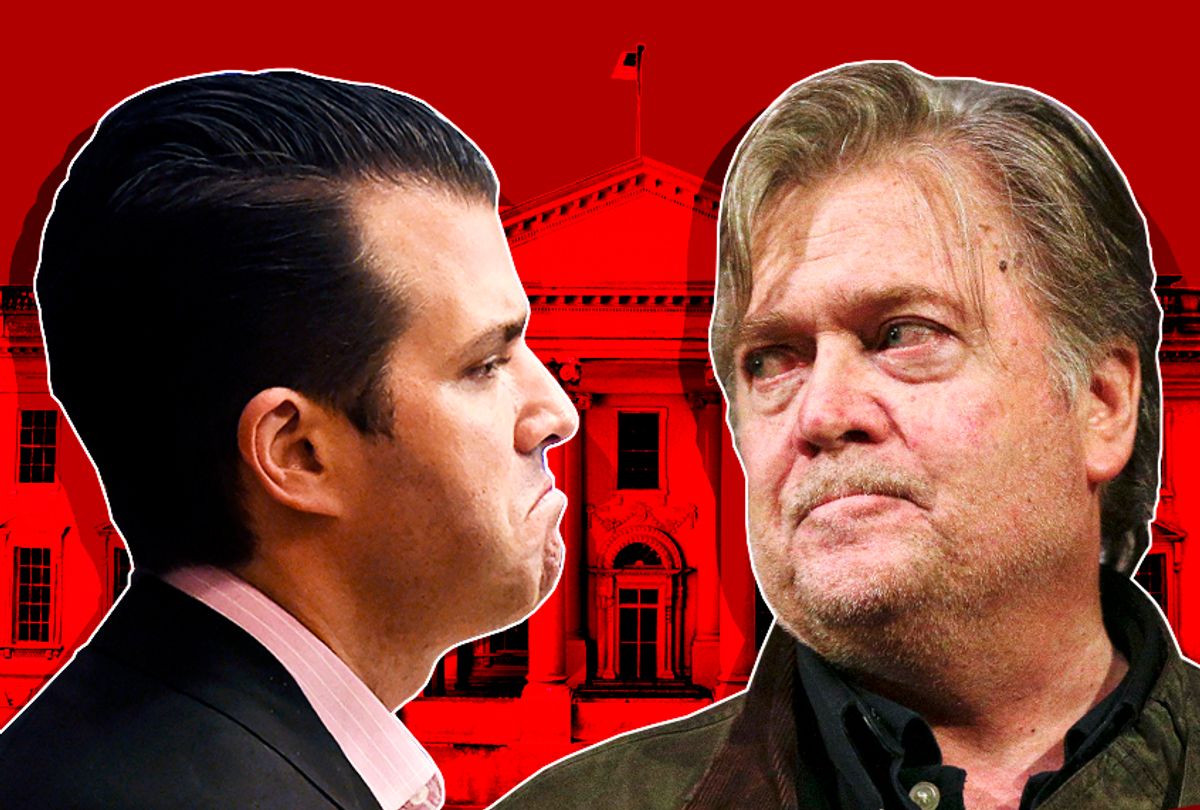 As we go into week two of the "Fire and Fury" extravaganza, the narratives are starting to take shape. The first, and in my view, most important story is that Michael Wolff's book indicates that this family of misfits who eventually became the Trump administration may have thought they were doing a national brand promotional tour instead of running for office. In the course of that, they may have given some of their "customers" in foreign countries the idea that they were open for business. We knew they were corrupt, but this is the first time we've understood that the Trump family and its hangers-on went into this whole thing cynically, just looking to make a quick buck.

The second narrative is that the president is losing his marbles. This assumes he was ever carrying a full bag in the first place, which I'm not sure is true. As a result, we are hearing a lot of talk about the 25th Amendment and mental health evaluations. Proving that he isn't the sharpest pin in the voodoo doll, President Trump tweeted a series of inane statements about being a "stable genius" and then followed up with this:

Reagan might be the wrong example to bring up. Administration officials reportedly considered invoking the 25th Amendment in 1987 because Reagan was showing signs of dementia, which his family later acknowledged he had while in the White House. So, yes, if you think that having people around you keep your deteriorating condition a secret is "handling it well," he did do that.

I would imagine this narrative will continue, because it's a real problem and it's going to get worse. Trump has already had more vacation time than any other president in history and appears to spend most of his days in front of the TV.

But the "Fire and Fury" soap opera that has the political world riveted is the big cat fight between Steve Bannon and Donald Trump. Everyone is asking what will become of Breitbart News and whether Bannon can still serve as the de facto leader of the "alt-right" without his partnership with Trump. Most importantly, who will side with whom? Will the Breitbart crew stick with Bannon or Trump? Will Trump be able to keep the base happy without Bannon and Breitbart? The audience is on the edge of its seats.

Since much of Trump's national celebrity was created by way of his reality TV show "The Apprentice," that makes a natural lens through which to view the shallow lunacy of his presidency. Last May, when we first began to understand just how dysfunctional this administration really was, Sarah Ellison of Vanity Fair wrote a long article about the growing feud between Bannon and Jared Kushner. She spoke with Sarah Gertrude Shapiro, the producer of the reality show parody "UnReal" who said Trump was "eerily similar" to her lead character, the antihero Quinn King. Ellison wrote:

Like King, Trump has a knack for expressing shocking sentiments that others may recoil from, Shapiro told me. And, like all great reality-TV personalities, Trump and many of his staff are “sound-bite machines” who share certain qualities: megalomania, a delusion of grandeur, a willingness to say anything, and little regard for what anyone else thinks: “They are this functionally dysfunctional ramshackle group of people who have come together through their own extremes.”

That does sound familiar, doesn't it?

Ellison characterized Bannon as "The Man with the Dark Past," Stephen Miller as "The Young Attention Seeker," Kellyanne Conway as "Cheerleader Gone Wrong," Ivanka as the "No-BS Heiress" and Kushner as "The Crafty In-Law." But I think this is the wrong reality series. Trump was an early adopter with "The Apprentice" and then "Celebrity Apprentice," and his shows featured many of the genre's tropes. But it was basically a game show with him as the host. Surely, Trump's true reality-show role is as a Queen Bee Real Housewife.

Think about it. The "Real Housewives" shows are about wealthy minor celebrities desperate for airtime, who behave like children and say ridiculous things for effect. Mostly they're about people feuding with one another, each taking turns being the witch and the victim from one season to the next. They are obsessed with the media but complain about it all the time and say it's full of crap, even as they feed the beast and gossip about each other. If that doesn't describe Trump's White House, I don't know what does.

This is the narrative we see at work with Trump and Bannon right now. They've been quietly feuding off and on, trying to keep the relationship alive, knowing they need each other to keep their mutual fans happy. Bannon had been whispering to the media for some time that Trump had "lost a step," and his disdain for Jared Kushner and Ivanka was hardly a secret. But Bannon's "Fire and Fury" comments were brutal and Trump got angry. How dare "Sloppy Steve" criticize Donald Jr.?

You see, in "Real Housewives" land, kids are supposedly off-limits. But they are often dragged into the storylines so a Housewife can take on the role of "mother bear" and self-righteously demand that her adversary and former friend apologize. If the other Housewife wants to be accepted back into the group she must take her medicine and endure ostracism for a time (although she'll have secret allies who speak to her on the sly), and then apologize, probably more than once. Then when the next season begins she'll be back in the fold.

This process for Steve Bannon began over the weekend with his statement taking back his comments about Don Jr. and promising to continue to support "Trumpism" all over the globe. According to Axios, Don Jr. will "graciously accept the apology," but the president still wants his surrogates to "bury Steve" and is working the phones telling people that they have to choose. It looks like this feud will extend into next season. How exciting! But I'd still bet real money they'll be Lucy and Ethel again in the end.

In all seriousness, there are important issues being discussed in relation to Wolff's book and that's a good thing. The question of Trump's fitness for office is of major concern, and it's past time this "open secret" is no longer kept secret. Because as much as his administration may resemble a really good season of a "Real Housewives" franchise, it's not actually a reality show. It's reality. And it's a very bad season indeed.