Who wants to live forever?

While a Silicon Valley futurist movement searches for the cure for death, two new novels lean into mortality 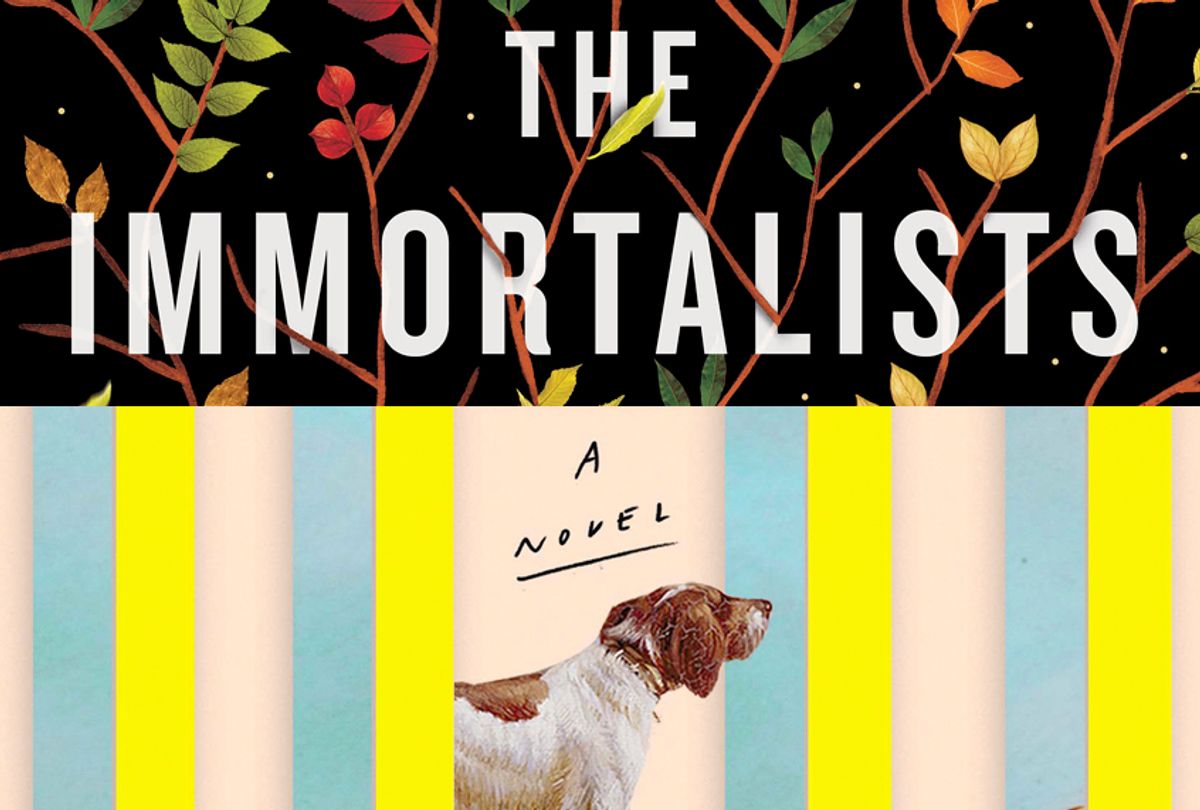 The Immortalists by Chloe Benjamin; The Afterlives: A Novel by Thomas Pierce (G.P. Putnam's Sons/Riverhead Books)
--

If you want a thoughtful book recommendation from a literary professional, visit your local independent bookstore. But if you're interested in the obsessions of America's mass market, nothing beats the sprawling jumble of a suburban Costco book table. This past weekend I discovered among the typical early-January planners and diet manuals a cookbook with a startling promise for a title. “How Not to Die,” a New York Times bestseller for three weeks when it debuted in late 2015, written by Dr. Michael Greger, a lab coat-wearing M.D. and expert on the vegan — or “plant-based,” as its rebranding dictates, now that spiffy lab coat types have wrestled it away from the dirty hippies — diet.

Experts claiming to have the answer to a more perfect body are nothing new, especially on the Costco book table in January. But something has shifted in recent years away from our former emphasis on diet as a tool for avoiding lifestyle diseases that happen to cause untimely death for some. Where we once strategized about how to live longer, more joyful and productive lives (and sure, look hotter while we're at it) now there’s a research and development emphasis on — with sizable investment from Silicon Valley — disrupting the human life expectancy entirely.

As it turns out, now “how can I live longer and better?” might be the wrong question. Aim higher, mortals: Why die at all if you can avoid it?

Last month, the secretive Calico Labs (an off-shoot of Google, which invested $1 billion in the endeavor) finally allowed a peek into the work of what MIT Technology Review called their “Bell Labs of aging research,” and it involves studying mice and their caloric intake, the "one intervention shown to extend life among multiple species," according to a report from Axios.

It should be no surprise that Calico is serious about discovering how not to die. Last spring the New Yorker sat in on a gathering held in Norman Lear’s living room where Nobel winners and Silicon Valley moguls rubbed shoulders with Hollywood’s aging royalty to launch a $25 million research competition for breakthroughs in “healthy longevity” sponsored by the National Academy of Medicine, at which biotech firm United Therapies founder Martine Rothblatt claimed, “[c]learly, it is possible, through technology, to make death optional.” (The article notes, poker-faced, that Rothblatt "has already commissioned a backup version of her wife, Bina—a ‘mindclone’ robot named Bina48.” Cue this reader’s nervous laughter.) A scene from this gathering:

Nicole Shanahan, the founder of a patent-management business, announced that her company would oversee longevity-related patents that [health-care hedge fund head Joon] Yun had pledged to the cause. “I’m here with my darling, Sergey,” she said, referring to her boyfriend, Sergey Brin, the co-founder of Google. “And he called me yesterday and said, ‘I’m reading this book, “Homo Deus,” and it says on page twenty-eight that I’m going to die.’ I said, ‘It says you, personally?’ He said, ‘Yes!’ ” (In the book, the author, Yuval Noah Harari, discusses Google’s anti-aging research, and writes that the company “probably won’t solve death in time to make Google co-founders Larry Page and Sergey Brin immortal.”) Brin, sitting a few feet away, gave the crowd a briskly ambiguous nod: Yes, I was singled out for death; no, I’m not actually planning to die.

For the second year in a row, life expectancy in the U.S. is actually decreasing, though not likely among the class of folks gathered in Norman Lear’s living room. More middle-aged white Americans with a high school degree or less are falling prey to so-called “despair deaths” — suicide, drug overdoses and alcohol-related deaths — with the opioid crisis specifically driving the overall numbers down over the last year. Biomedical research funding isn’t all or nothing — the Zuckerberg-Chen Initiative tackling infectious disease and the Gates Foundation’s focus on HIV research, for example, prove that — but focusing on defeating death, as if the U.S. has already scientifically “disrupted” addiction and overcome structural health issues like the shameful hookworm epidemic we have allowed to flourish in rural Alabama, suggest a cart put eagerly before the horse.

In a suburban Costco on a bleak January day, surrounded by glowing green detox juices and stacks of “How Not to Die,” it’s clear that hints of this death-hacking pursuit have trickled down from Sergey Brin’s bullet journal to the middle-class bulk shopper, who may not ever see death deemed "optional" in her lifetime and doesn’t want to spend any more precious remaining moments buying toilet paper by the incremental six-pack if she can avoid it. Die we must, whether or not we reconcile ourselves to that central absurdity of conscious life before it happens. Let those with deep-pocketed benefactors solve for immortality; to face the questions of life and death money can’t resolve, turn to fiction.

Two excellent new novels, Chloe Benjamin’s “The Immortalists” and “The Afterlives” by Thomas Pierce, whose O. Henry Award-winning story collection “Hall of Small Mammals” landed him on the National Book Award’s 5 Under 35 list in 2016, weave science into stories about faith, family, and mysteries of existence. In both, death is still an inescapable fact of life.

There’s more than a little Silicon Valley-infused flavor in “The Afterlives,” whose hero Jim, a 33-year-old bank loan officer, was revived after an unannounced cardiac condition killed him — briefly — and who now relies on a smart-heart implant that notifies him via an app on his phone every time it saves his life. Jim’s sudden death and revival don’t imbue him with a newfound serenity or spiritual clarity, though. “I saw nothing. No lights, no tunnels, no angels. I was just gone,” he tells his doctor.

Set in a small North Carolina town recently overrun by an influx of White Hairs — energetic, well-heeled retirees —“The Afterlives” is sprinkled with “Black Mirror”-style futuristic touches — like an explosion in popularity of unnerving AI holograms in workplaces and public spaces — which dance along the border of very cool and creepy. When an unexpected expense sheet comes across his desk during a business loan application, Jim embarks on a journey that involves his former high school sweetheart Annie, recently widowed and now a mother, his father, and a stairwell at a Mexican restaurant that might be haunted. His obsession leads him and Annie, who he begins seeing again, to a reclusive physicist who may be the key to unambiguous contact with the afterlife, and the secrets of the soul itself. Annie’s first husband, who died under slightly mysterious conditions, is also a ghostly presence in the relationship, an outline of a man who commands even more attention because of his absence.

Pierce’s tale unfolds loosely but deliberately, cutting across timelines to weave in the story of what went down in that restaurant’s stairwell once upon a time, and who else, now living or dead, might have been involved. “The Afterlives” is as much a dialogue and an attempt at reconciliation between faith and science as it is a contemplation of the opportunities of second chances. Jim has more in common with his “hyper curious skeptic” father than his devout Baptist mother, and begins attending the Church of Search — more of a humanist lecture series than a coherent theology — with Annie, who had cooled on the Christianity of her youth. And yet the way in which the skeptics pursue the truth of life after death is in itself an act of faith, to believe that consciousness can be understood and experienced beyond the physical body and current plane of existence, and what’s more, science can maybe even prove it.

An act of faith likewise lies at the heart of “The Immortalists,” Benjamin’s second novel: four young siblings in New York City, summer of 1969, visit a mysterious fortune teller rumored to be able to tell the exact day that you’ll die. Each of the kids — Simon the baby, Klara the dreamer and budding magician, Daniel the future doctor and Varya, the oldest — receives a date. What they do with the knowledge — destiny or bunk, who knows? — is up to them, but Benjamin suggests that knowing too much about your own end, or believing you do, isn’t knowledge we’re necessarily prepared to have.

The book unfolds in urgent quarters, shifting point of view up the chain of sibling command until present day, starting with Simon as he decamps to San Francisco in the late ‘70s with Klara after their father’s death and attempts to live a full life for the first time. Each sibling suffers a complicated, solitary relationship with his or her foretold date, and yet their fates are also linked; outcomes don't happen in a vacuum. Benjamin wisely resists telling the reader whether the shape each life takes is destiny or not.

Billed as in the vein of “Everything I Never Told You” by Celeste Ng and Meg Wolitzer’s “The Interestings” — high praise and apt comparisons — “The Immortalists” also reminded me strongly of Karen Joy Fowler’s award-winning 2013 dissection of the mysterious and complicated family bonds, “We Are All Completely Beside Ourselves.” Like Fowler, Benjamin has mastered the sibling’s tension between intimacy and baffling unknowability. And Varya’s scientific research — her workplace laboratory is inspired by California’s Buck Institute for Research on Aging, which has Silicon Valley ties, too — contains echoes of Fowler’s narrative as well, which I won’t spoil for those who haven’t read both books.

Indeed, it was Varya’s secretive work life — shades of those Calico Lab calorie-counting mice — that I thought of when the brassy provocation of “How Not To Die” jumped out at me from that Costco book table. Hacking my diet can do many things for me but it can't teach me how to be qualitatively better at human life. I don't want to be a "Black Mirror" buzzkill — sign me up for that old, old age, please — but is anyone thinking about how we'll prepare emotionally for these dramatically longer lives? Have the vampire novels of recent yore taught us nothing?

Slowing the body’s aging process through scientific methods won’t necessarily reveal in tandem the secrets to thriving emotionally across a longer span than we have experience to guide us, to reconciling the natural pain of life with the desire to prolong it as long as possible. “The Immortalists” suggests staying tethered to the world and bound to others, perhaps especially if you're drawn toward self-protection, isolation, withdrawal. “The Afterlives,” through a completely different kind of story, presents a similar conclusion. You, me, Sergey Brin, we might well not end up benefiting directly from the How Not to Die movement. In the meantime, we still have to lead our own experimental trials in how to live — on this plane, in this present, destinies so maddeningly and thankfully as yet unknown.