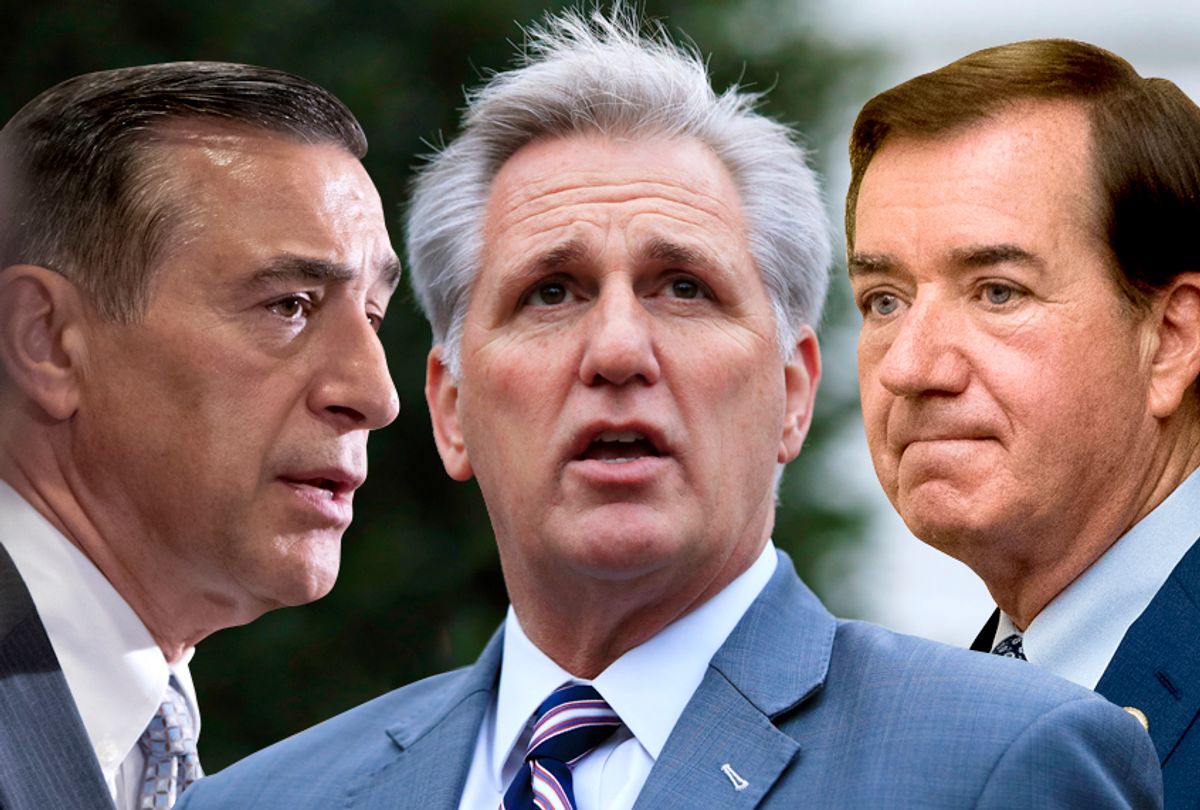 Donald Trump's rise has often been attributed to Democrats’ snooty dismissal of undereducated voters in flyover country. According to this narrative, they wrote off much of the country between the coasts, to their own political detriment.

That may not be entirely false. But 10 months out from the midterm elections, much of the drama is in the blue states. Republicans’ strategy of seeking vengeance against regions of the country that did not vote for Trump appears likely to hurt GOP legislators in Democratic-leaning states the most.

Two of California’s longest-serving Republicans in Congress announced plans to retire this week, joining a record number of House Republicans who are choosing to quit rather than face re-election this fall. Rep. Darrell Issa joined fellow Southern California Republican Rep. Ed Royce on the GOP’s retirement roster on Wednesday. Royce, chairman of the House Foreign Affairs Committee, announced his surprise retirement on Monday.

Issa, who is the wealthiest member of Congress, was seen as a top Democratic target in 2018 after Democrat Doug Applegate came within 2,000 votes of unseating him in 2016. Hillary Clinton won Issa's district in 2016 by more than seven points, although Mitt Romney had beaten Barack Obama there by a similar margin in 2012. The National Republican Congressional Committee flagged Issa’s district as one where the incumbent was in danger in early 2017.

Although Issa was one of just 13 Republicans to vote against the GOP tax plan last month (blue-state Republicans loudly objected to the capping of the state and local tax deduction), he joined all 14 California House Republicans in voting to repeal the Affordable Care Act, despite intense public protest. University of Virginia professor Larry Sabato’s Crystal Ball newsletter moved its 2018 campaign prediction for Issa’s seat from “Toss Up” to “Leans Democrat” on Wednesday.

The fate of California Republicans, already a seemingly endangered species, only highlights the daunting political landscape GOP candidates face in 2018.

There are already at least 31 House Republicans who have announced that they will not seek re-election in November. Democrats need a net gain of 24 seats to win control of the House. Since 1934, a new president’s party has lost an average of 23 House seats in the midterms following his election. According to the latest RealClearPolitics average, Democrats have an 11-point edge in the generic ballot, which statistical models suggest is more than enough to recapture the majority.

The president's historically low poll numbers clearly spell bad news for Republicans, but it is the legislative strategy of Republican leaders in Congress that has left so many of their blue-state colleagues vulnerable. By forcing a months-long battle to repeal Obamacare only to follow up the bruising failure with a historically unpopular tax bill that is widely perceived as punish residents of coastal states, Republicans appear willing to sacrifice seats in more diverse and affluent districts. House Majority Leader Kevin McCarthy, interestingly, has made little effort to aid his vulnerable fellow Californians.

To this point, Republicans are giving up seats in eight districts that Hillary Clinton either won in 2016 or lost narrowly. Democrats hope to capture as many as 10 GOP-held seats in California, including Issa's, Royce's and neighboring districts held by Reps. Mimi Walters, Dana Rohrabacher and Duncan Hunter, who has been dogged by an ongoing FBI investigation. (A federal grand jury is slated to hear evidence this month on Hunter's use of campaign funds.)

Trump, who kicked off his presidency complaining about the “millions” of undocumented immigrants he claimed gave Clinton the popular vote win, kicked off 2018 with a series of decisions seemingly targeting the Golden State. As Politico’s David Siders notes:

In the span of three days, the Trump administration threatened California’s burgeoning recreational marijuana market, proposed drilling off the California coast and pledged to increase immigration enforcement in the state — proposing to punish cities that get in the way. That came on the heels of his signing a tax bill that hit California harder than most other states.

As Sider goes on to mention, Trump is the first president since Dwight Eisenhower to not visit California during his first year in office. It may have been Democratic lawmakers who alluded to the looming fate of California’s Republican delegation in Congress when they broke out in chants of “hey, hey, goodbye” shortly after the House voted to repeal Obamacare last year.

But it is Republicans – for all their sneering at the coastal elites – who have practically written off states like California, New York and New Jersey, and who will now reap the whirlwind. Democrats could come close to a congressional majority on the seats they flip in those three states alone, home to nearly one-fourth of the U.S. population. where nearly one in four Americans lives. The result is an ever more regional Republican Party, which is only represents a majority in the Deep South and would already be a marginal force in American politics if not for its ingenious use of the gerrymander.