Right-wing rhetoric about "open borders" is a big, dangerous lie

Nativists claim that current U.S. immigration is based on "open borders." In a global perspective, that's laughable 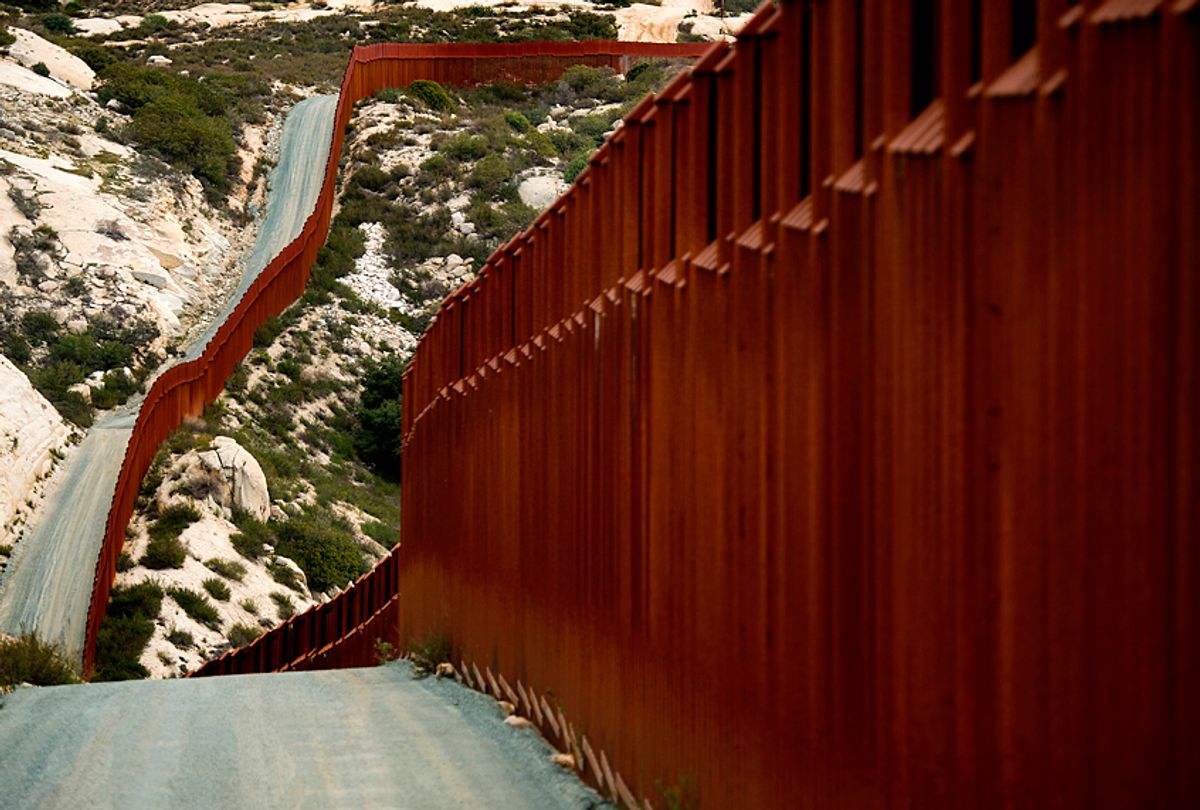 This article originally appeared on the Niskanen Center website. Republished by permission.

Donald Trump ran on promises to restrict immigration and build a wall on the U.S.-Mexican border. During the first year of Trump’s presidency, immigration hawks have pivoted (as immigration doves predicted they would) from targeting illegal immigration to attacking central aspects of the status quo system of legal immigration — diversity visas and family reunification in particular — in favor of a much more restrictive points-based system. Populist nativists, such as Trump and his media champions at outlets like Breitbart and the Daily Caller, get a ton of rhetorical and political mileage from railing against the specter of “open borders,” and then constantly narrowing the definition of “open” to include most every policy that allows the admission of any immigrants.

Brian Lonergan from the restrictionist Immigration Reform Law Institute, in a response to a mass killing carried out by a legal immigrant admitted on a diversity visa, provides a typical instance of anti-“open borders” rhetoric:

Open-border advocates in politics and the media vilify those who dare suggest that the laws be changed, and the status quo prevails. This tradition needs to end immediately.

Lonergan implies that “open borders” is the status quo American immigration policy, and that the diversity visa program is part of it. But that’s completely ridiculous! In 2016, 11.4 million people entered the lottery for 50,000 diversity visas. An authentically “open borders” version of the diversity visa program would admit 100 percent of those applicants, not less than one-half of one percent. The mathematicians among us might note that 50,000 is 11.35 million closer to zero than 11.4 million. The restrictionist tradition of labeling those who favor the almost totally closed immigration policy status quo as “open-borders advocates” is grossly dishonest and “needs to end immediately.”

Perhaps more importantly, practical advocates of a more inclusive and permissive immigration system need to be much clearer about the fact that the real-world political debate takes place within an overwhelming international consensus favoring almost completely closed borders. The liberalizing side of the politically relevant immigration debate is, in fact, plumping for reforms that are slightly less restrictive than the draconian closed-borders status quo.

On a continuum running from completely closed to completely open borders, the most immigrant-friendly countries in the Organization for Economic Cooperation and Development (OECD) are just a few steps away from “completely closed.”

In 2015, the United States admitted less than half the OECD average of immigrants, as a percentage of total population. The borders of the United States are impermeable relative to those of the United Kingdom, Canada, Germany, Australia, Sweden and New Zealand. Even then, the most permissive country in the family of wealthy liberal democracies isn’t very open at all. Setting aside tiny Luxembourg, which is about the size of greater Omaha, the OECD openness champ is Switzerland (but good luck getting citizenship!), which takes in just a bit more than 1.5 percent of its population in migrants per year. That isn’t very open at all.

Shifting from flows to stocks, the UN’s 2015 migration report says:

Between 2000 and 2015, the number of migrants grew in 167 countries or areas worldwide. In 63 of these, including France, Germany and the United States of America, the international migrant stock grew by less than 2 per cent per annum. In 104 countries or areas, however, the pace of growth during the period 2000-2015 was considerably faster, with 19 countries or areas recording an average annual growth rate of 6 per cent or more.

Got that? Between 2000 and 2015, 109 countries saw their immigrant population grow at a faster rate than that of the United States. Among countries with any net international in-migration, the U.S. is resolutely on the closed side of the continuum.

Now, nobody knows for sure what “completely open” borders would mean in terms of immigrant inflows to the United States. The estimate will vary wildly depending on our background assumptions. We’ll get one result if we imagine that completely free cross-border movement is unilaterally adopted by the U.S. and a much different result if we imagine that free movement is adopted multilaterally by a large number of countries with similarly attractive labor markets and human rights protections.

The estimate also depends on the size of the wage bonus for moving to a higher-productivity labor market, which is generally declining with declining global inequality, as well as the typical strength of individual preferences to stick close to home. It’s worth noting that borders are completely open within the United States, yet the sizable productivity and wage differentials between lower- and higher-population-density areas has not been enough in many regions to induce folks to move even a short distance to better opportunity. So it’s really, really hard to say what the rate of in-migration would be under “completely open” borders.

However, it is very easy to say that the U.S. status quo is much closer to “completely closed” than “completely open” under even the most modest estimates of movement under the “completely open” counterfactual. If we move out of the OECD into the broader world, the current world champ in immigrant population is Qatar, which makes extensive use of guest workers, with about 22 migrants per 1,000 people. If we use Qatar as the open end of the closed-to-open continuum, the United States’ four migrants per 1,000 people is in comparison very, very close to “completely closed.”

The More Migration to the U.S. There Would Be under Open Borders, the Further We Are from Open Borders

Estimates of huge global productivity and welfare gains from free movement, such as the one produced by the Center for Global Development’s Michael Clemens, depend on the assumption of a fairly high degree of eagerness to move away from family and friends to earn higher wages. If this sort of estimate seems credible to you, you’re bound to conclude that even the most permissive really existing immigration system is very far from the open borders frontier.

When immigration restrictionists criticize actual idealistic proposals for true open borders, they typically argue that we would be “swamped,” and our distinctive liberal institutions ruined, by impoverished foreign hordes. Whatever the merits of this hypothesis, the more credence you lend to the idea that open borders would lead to swamping, the more you’re implicitly committed to the idea that the United States isn’t even close to open borders. The worse you think swamping problems would be, the closer you’re placing the United States toward the closed end of the closed-to-open continuum.

Nevertheless, the immigration restrictionists who warn of swamping under open borders tend to be the same people who characterize the status quo as an “open borders” system. It’s obvious why they traffic in this sort of rank dishonesty. They want to further harden our already very hardened borders, and this is easier to justify if you can systematically mislead people about the fact that the American immigration system is relatively closed even when compared to other wealthy liberal democracies.

As I’ve argued elsewhere, good public policy analysis requires giving up on “ideal theory.” This means, among other things, giving up on wild speculation about counterfactual social systems and adopting an empirically grounded comparative perspective. If you care about freedom or equality or whatever, you should look at the places where people are the freest or equalest or whatever-est, and then try to nudge our system in that direction.

From this perspective, it’s pretty clear that anything resembling open borders isn’t remotely in the cards, and isn’t worth spending too much time speculating about. The humanitarian gains from reducing barriers to migration mainly flow from people leaving jurisdictions in which the productivity of their labor is low, and resettling in jurisdictions in which it is high. But the world’s highest-productivity labor markets are located in liberal democracies with large welfare states. Questions about equitable distribution and national identity loom large in these polities, and high barriers to immigration are constantly reaffirmed by their democratic bodies. It seems very likely that the political dynamics of the liberal-democratic institutions that sustain high-productivity labor markets also make it unlikely that more than a tiny fraction of outsiders will ever be granted access to those markets.

From the perspective of this or that brand of ideal theory, the closed-borders implications of the liberal-democratic welfare state may make the entire enterprise look like a huge mistake. But the liberal-democratic welfare state is also the best humanity has so far achieved. That’s why we need to take the convergence among history’s best regimes on relatively closed immigration policies very seriously. It’s also why we need to understand that the actual political debate over immigration policy within actual wealthy liberal democracies takes place within the nearly-but-not-entirely closed borders consensus.

Once we adjust our framing of the question to better accord with the actual practices of our best social systems, and the actual policy debate that takes place within them, it becomes obvious that liberalizing immigration reformers aren’t “open borders advocates” any more than advocates of more generous public nutritional assistance for poor children are “communists.” Communists and open borders advocates do exist, but they’ve got next to nothing to do with actual politics or policy. The liberalizing immigration reformers who do matter favor somewhat less thoroughly restrictive immigration policy that is consistent with the winning formula of the capitalist liberal-democratic welfare state. Their proposals, if enacted, would leave our system at a point on the closed-to-open continuum much nearer to the point that restrictionists recommend than to the point open-borders ideal theorists recommend.

So the question isn’t “Should we have totally open borders?” -- and you shouldn’t let yourself get roped into that frame. The question is “Should we be more like Switzerland or Canada or more like Japan?” (It’s notable here that Japan has recently decided to be more like Switzerland or Canada.) Should America’s golden door, now just slightly ajar, be inched open a bit or shut further? That’s the debate we’re actually having.

The fact that restrictionists insist on flagrantly mischaracterizing the stingy immigration status quo suggests that they don’t think they can win the debate on the merits. Those of us who want to nudge the door open an inch or two should help ourselves by more vigorously and vocally refusing to conduct the debate within the nativists’ specious frame.

Will Wilkinson is the Niskanen Center’s vice president for policy.

MORE FROM Will Wilkinson