Can road salt and other pollutants disrupt our circadian rhythms?

The tons of road salt used each year in America, does go somewhere after the snow melts 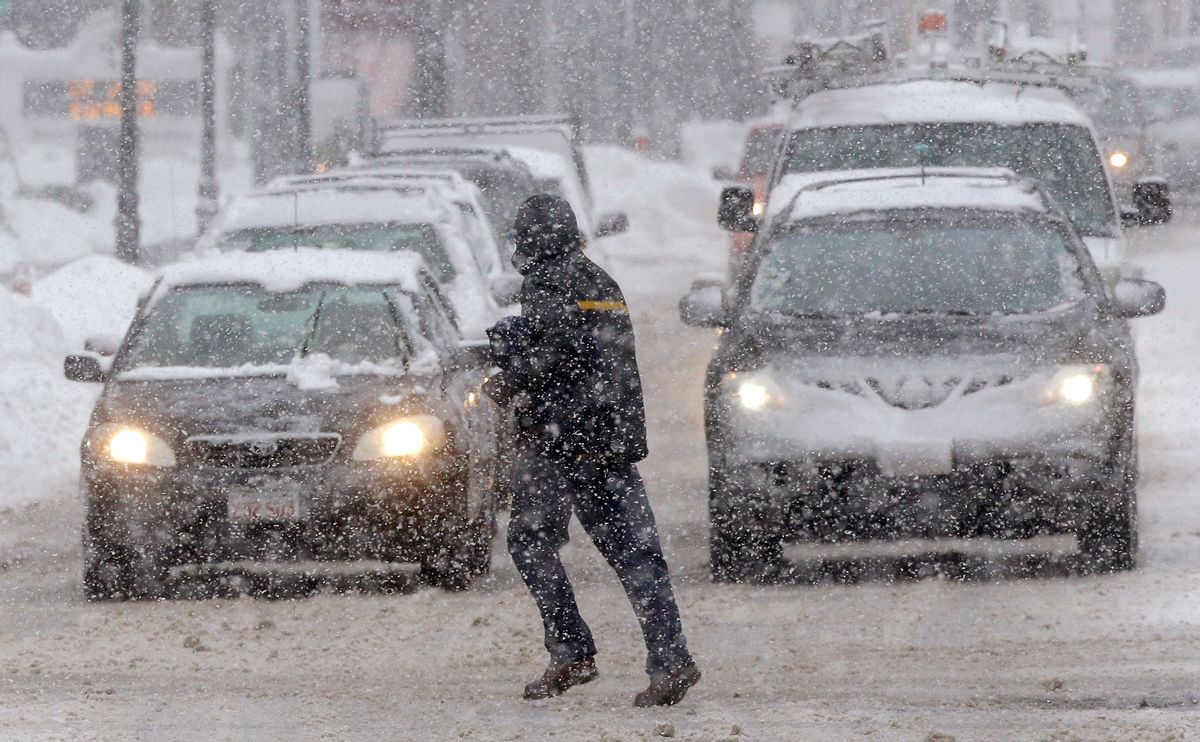 A pedestrian crosses the street in front of vehicles during a snowstorm, Sunday, Feb. 12, 2017, in Waltham, Mass. (AP Photo/Steven Senne) (AP)
--

Every winter, local governments across the United States apply millions of tons of road salt to keep streets navigable during snow and ice storms. Runoff from melting snow carries road salt into streams and lakes, and causes many bodies of water to have extraordinarily high salinity.

At Rensselaer Polytechnic Institute, my colleague Rick Relyea and his lab are working to quantify how increases in salinity affect ecosystems. Not surprisingly, they have found that high salinity has negative impacts on many species. They have also discovered that some species have the ability to cope with these increases in salinity.

But this ability comes at a price. In a recent study, Rick and I analyzed how a common species of zooplankton, Daphnia pulex, adapts to increasing levels of road salt. We found that this exposure affected an important biological rhythm: The circadian clock, which may govern Daphnia‘s feeding and predation avoidance behaviors. Since many fish prey on Daphnia, this effect could have ripples throughout entire ecosystems. Our work also raises questions about whether salt, or other environmental pollutants, could have similar impacts on the human circadian clock.

In studying how road salt affects aquatic ecosystems, the Relyea lab showed that Daphnia pulex can adapt to handle moderate exposures in as little as two and a half months. These levels ranged from 15 milligrams of chloride (a building block of salt) per liter of water to a high of 1,000 milligrams per liter — a level found in highly contaminated lakes in North America.

However, an organism’s ability to adapt to something in its environment can also be accompanied by negative trade-offs. My lab’s collaboration with Rick’s began in an effort to identify these trade-offs in salt-adapted Daphnia.

Rick and I hypothesized that adaptation to high salinity could disrupt Daphnia’s circadian rhythms based on recent evidence showing that other environmental contaminants can disrupt circadian behavior. One important behavior in Daphnia that may be controlled by the circadian clock is the diel vertical migration — the largest daily biomass migration on Earth, which occurs in oceans, bays and lakes. Plankton and fish migrate down to deeper water during the day to avoid predators and sun damage, and back up toward the surface at night to feed.

Given what we know about circadian function, it would be logical to assume that exposure to pollution would not affect an organism’s circadian rhythms. While circadian clocks can incorporate environmental information to tell the time of day, they are heavily buffered against most environmental effects.

To understand the importance of this buffering, imagine that the timing of an organism’s day length responded to environmental temperature. Heat speeds up molecular reactions, so on hot days the organism’s 24-hour rhythm could become 20 hours, and on cold days it might become 28 hours. In essence, the organism would have a thermometer, not a clock.

To determine whether clock disruption is a trade-off to pollutant adaptation, we first had to establish that Daphnia is governed by a circadian clock. To do this, we identified genes in Daphnia that are similar to two genes, known as period and clock, in an organism that serves as a circadian model system: Drosophila melanogaster, the common fruit fly.

We also tracked the same genes in populations of Daphnia that had adapted to increased salinity. Much to my surprise, we discovered that the daily variation of period and clock levels deteriorated directly with the level of salinity the Daphnia were adapted to. In other words, as Daphnia adapted to higher salinity levels, they showed less variation in the levels of period and clock over the day. This demonstrated that Daphnia’s clock is indeed affected by pollutant exposure.

We currently don’t understand what causes this effect, but the relationship between salinity levels and decreased variation in the levels of period and clock offers a clue. We know that exposure to pollutants causes Daphnia to undergo epigenetic regulation — chemical changes that affect the function of their genes, without altering their DNA. And epigenetic changes often show a gradual response, becoming more pronounced as the causal factor increases. Therefore, it is likely that high salinity is inducing chemical changes through these epigenetic mechanisms in Daphnia to suppress the function of its circadian clock.

We know that environmental conditions can affect what the clock regulates in many species. For example, changing the sugar that the fungus Neurospora crassa grows on changes which behaviors the clock regulates. But to our knowledge, this study is the first to show that genes of an organism’s core clock can be directly impacted by adapting to an environmental contaminant. Our finding suggests that just as the gears of a mechanical clock can rust over time, the circadian clock can be permanently impacted by environmental exposure.

This research has important implications. First, if Daphnia’s circadian clock regulates its participation in the diel vertical migration, then disrupting the clock could mean that Daphnia do not migrate in the water column. Daphnia are key consumers of algae and a food source for many fish, so disrupting their circadian rhythms could affect entire ecosystems.

Second, our findings indicate that environmental pollution may have broader effects on humans than previously understood. The genes and processes in Daphnia’s clock are very similar to those that regulate the clock in humans. Our circadian rhythms control genes that create cellular oscillations affecting cell function, division and growth, along with physiological parameters such as body temperature and immune responses.

When these rhythms are disrupted in humans, we see increased rates of cancer, diabetes, obesity, heart disease, depression and many other diseases. Our work suggests that exposure to environmental pollutants may be depressing the function of human clocks, which could lead to increased rates of disease.

We are continuing our work by studying how the disruption of Daphnia’s clock affects its participation in the diel vertical migration. We are also working to determine the underlying causes of these changes, to establish whether and how this could happen in the human brain. The impacts we have found in Daphnia show that even a simple substance such as salt can have extremely complex effects on living organisms.