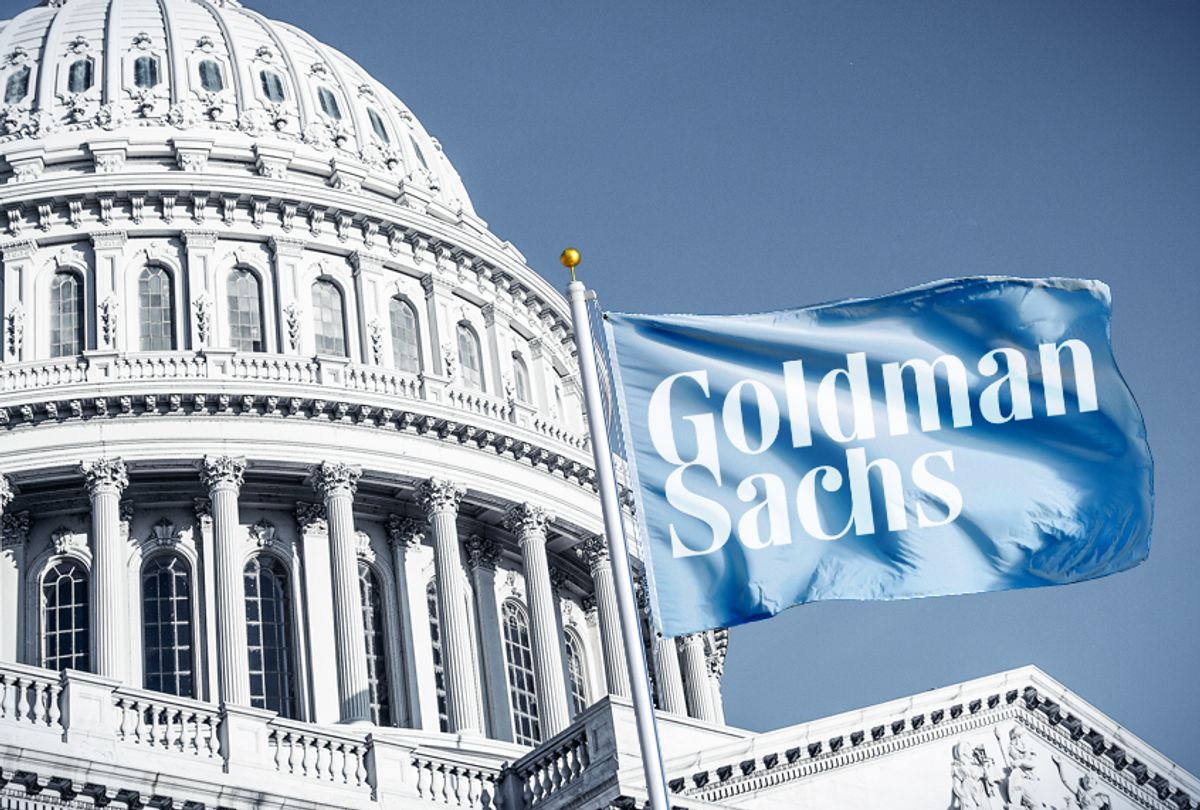 Few companies exercise greater political clout than Goldman Sachs. It spent more than $26 million lobbying the federal government from 2010 to 2016. It populates the Trump administration with veterans, from former President Gary Cohn, who directs Trump’s National Economic Council, to former Chief Investment Officer Steven Mnuchin, who serves as Treasury Secretary, to former counsel Jay Clayton, who chairs the Securities and Exchange Commission (SEC), to name only a few. Alumni preside over Federal Reserve banks, the European Central Bank and the Bank of England. Goldman also finances public projects such as bridges and roads, and its projects require ongoing government interactions to receive permits. In addition, part of its security comes through taxpayer-subsidized deposits, along with access to the Federal Reserve’s credit facilities.  There’s a reason for the moniker “Government Sachs” — as Goldman is inextricably tangled up with U.S. government and politics.

That’s the argument of a group of shareholders who filed a resolution with Goldman seeking a vote at the forthcoming annual meeting calling for greater political spending disclosure.

Goldman, however, would rather keep this information private. Goldman filed a request on Dec. 28, 2017, with the SEC asking permission to omit the resolution. Citigroup and Eli Lilly filed similar appeals.

Until this year, the SEC likely would clear such a resolution for a vote and reject a company request to omit it. But under pressure from industry groups, we fear that the SEC could reverse its policy. The Business Roundtable (BRT) has launched a campaign that would virtually shut down shareholder resolutions altogether. Jamie Dimon, CEO of Goldman peer JP Morgan, is chair of  the BRT,  which argues shareholders should own 0.15 percent of the company stock to qualify as a resolution proponent. (Currently, the rule requires an investment of at least $2,000.) No individual shareholder holds this amount, and only the largest institutions would qualify.

In the face of this industry pressure, the SEC recently announced new guidance on how it will address such resolutions. In November, the SEC issued a staff legal bulletin explaining how it would treat matters that may involve relatively small amounts of firm resources (for context, $26 million for Goldman Sachs is a fraction of the billions it spends simply on bonuses).

However, many of the issues raised by these resolutions are important social, environmental or governance issues (such as lobbying) that are significant to the company’s operations and reputation regardless of monetary amount. Pivotal to the SEC’s determination will be the board of director’s “analysis of the proposal’s significance to the company.” In this case, the SEC assumes the board serves shareholder best interests. Whether this guidance proves useful or toxic depends on the resulting SEC decisions. In one recent encouraging decision, the SEC on Dec. 21, 2017, denied Apple’srequest to omit a resolution calling on Apple to establish a board committee to examine human rights, particularly in its Chinese operations.  The SEC explained that Apple itself acknowledges that human rights are significant, and its board analysis “does not explain” why it’s not significant for Apple. However, the SEC sided with the Apple board on other resolutions.

Like Apple, Goldman claims that its board did analyze whether its spending on lobbying is significant or raises “significant social or ethical concerns.” It performed this analysis by reviewing a staff report that concluded there were no such social or ethical concerns. And the board unsurprisingly decided that it concurred with the Goldman staff.

On its face, Goldman’s claim of board analysis shouldn’t persuade a rube, let alone the SEC. Further, the importance of political and lobbying activity for Goldman is apparent to all, including of course the influential players on Goldman’s board. Finally, it’s incontestable that political spending and lobbying raises social and ethical concerns. Politics, by nature, involves social and ethical concerns, and that is one of the reasons that Goldman (commendably) has put some limits on its direct political spending and how its money can be used by trade associations in politics.

The SEC must reject Goldman’s request.

But the SEC should go further. It should require that all firms disclose their political and lobbying spending. It is just “good governance.” By nature, political money is tied to public issues and causes that inexorably involve the reputation of the firm. At many firms, this spending may be central to the firm’s operation, as it is with Goldman. At some other firms, it may be negligible, and reporting will reveal this as well. Public Citizen supports a petition calling for political spending disclosure by all firms, which has drawn 1.2 million comments in addition to ours. SEC Commissioner Robert Jackson served on the drafting committee as a Columbia law professor, and we hope he makes this rulemaking an early priority.

To date, Clayton has steered a sensible path on basic issues. The SEC’s forthcoming decision on Goldman will signal if he remains on track, or is instead running policy off the rails.