I was an armed and dangerous neo-Nazi youth

Christian Picciolini now works to de-radicalize white supremacists. He was one of them, once 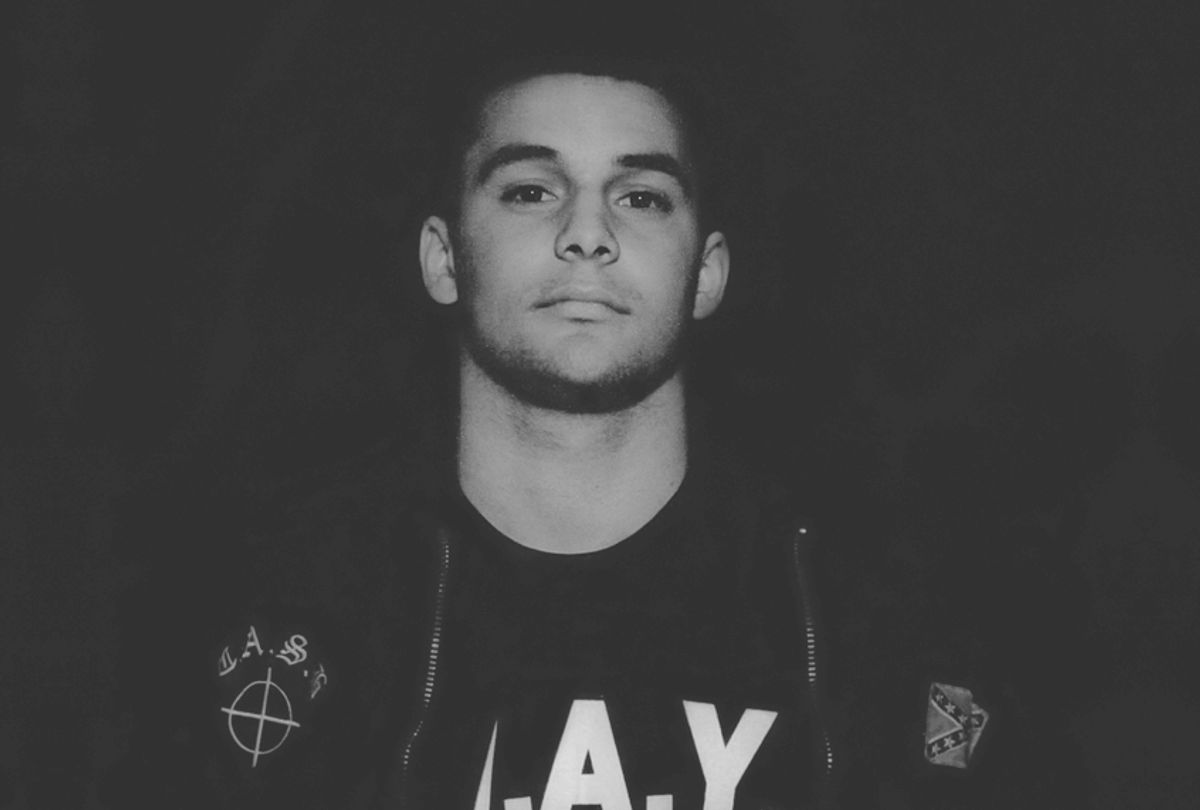 Christian Picciolini (Courtesy of the Author)
--

I purchased my next gun unlawfully and without a permit. Ironically, I bought it off the street from a Mexican. It was a .380-caliber semi-automatic handgun. I threw the old, busted .25 that my friend Kubiak had given me into the Blue Island canal one night after failing to get it to chamber ammunition properly.

Until you grip a loaded gun in your hand, you don’t know power. It’s a surreal feeling.

Holding my pistol, I felt I could conquer the world. I loved it. 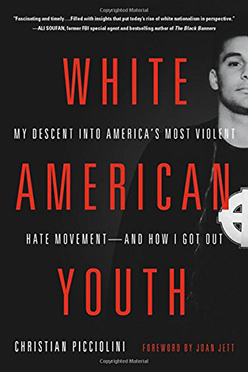 I talked to Bill Rudolph — an older Chicago Nazi whom I’d originally met through Clark and Carmine — about getting more guns. He worked on a factory assembly line, like a true-blue American would, and responded by giving me a co-worker’s stolen wallet, complete with Illinois driver’s license.

“Use this,” he told me. “First thing you gotta do is get a permit to buy a gun.”

I didn’t look a thing like the chubby Latino guy on the stolen license and pointed it out.

He scoffed at my inexperience. “You think anybody gives a shit if that’s you or not? You fill out a firearm application and go to the ghetto to have some stoned, fat baby mama notarize it. She won’t even look at the picture on the license. They collect the money and don’t ask any questions.”

I couldn’t believe that would be the case, but I’d be damned if I’d show any fear. What’s the worst they could do? Call the cops and charge me for having a stolen ID? It’s not as if the cops and I were strangers. Like Bill promised, the black lady behind the currency exchange counter was so preoccupied talking on the phone to her friend that she didn’t so much as glance at the ID. She did, however, take my money and stamp her approval on my firearm application.

I brought the paperwork back, and I showed Bill. “So now what?” “Send the notarized application in to the Illinois State Police and . . .” “State police?” I interrupted, “What do you mean state police? I thought that was it. She stamped it . . . See?”

“Don’t worry about it. It’s not your name or photo. The address won’t even be yours.”

“But isn’t that a federal crime? Like mail fraud or something?” I could tell he was starting to lose patience with me.

“Look, just give me the damn paperwork, and I’ll send it in for you.” He took me to his living room window and pulled aside the curtain. “You see that vacant house across the street? We’ll use that address. When the mail gets delivered, I’ll grab it for you. Don’t worry.”

“All right.” It sounded like a valid theory. “Then what?” “Go to a gun show, Pablo Ortiz.” We both laughed.

I swear I looked nothing like the guy in the stolen driver’s license. And for two solid months I worried the FBI and ATF would knock down my door and arrest me for federal fraud and firearm violations.

Gun shows were everywhere. I found one soon after Bill received the approved “Pablo Ortiz” firearm permit in the mail from the Illinois State Police, and we headed to the show without a qualm. I had my gun license and Bill’s reassurance that the racist hillbillies at these shows didn’t give a damn whom they sold the guns to. It was about the green. So long as you looked white.

Bill was right again. The people at this show — and every other gun show I attended — couldn’t care less whom they sold weapons to. The guy he introduced me to, an older family friend of his, barely looked at the permit, aside from scribbling its info on the receipt. Even the mandatory federal waiting period didn’t seem to bother this guy. The seller handed over the gun the second he collected my money.

I left that first show with a brand new Ruger 9mm pistol tucked into the waistband of my jeans, electrified by the sheer power of it. I was ready for anything now.

The only thing I lacked was training.

So I went to the shooting range, where no questions were asked. Give them the money, flash your permit, your white smile and go.

I picked up shooting quickly. My finger squeezed the trigger with ease, my arm supported the weapon without flinching, my eye zeroed in on the target within a fraction of a second.

Like most sports I tried, shooting was relatively easy for me. But shooting would not be a sport.

It was a part of my survival plan. I was prepared to battle to the death, even martyr myself, to protect the white race from destruction.

I saved money from every paycheck and acquired more firearms from these gun shows. At seventeen years old, my arsenal consisted of a new Russian-made AK-47, a Ruger 9mm, a .380 semi-auto handgun, a military-issue .30-caliber M-1 carbine rifle with a folding carbon stock, and, for good measure, a sawed-off 20-gauge shotgun that was cut down to about the length of my forearm.

By fall, I was a decent shot and had collected weapons and ammo to spare. I was ready. I didn’t brag about my cache, but word somehow got around. Cops suspected I had illegal weapons but couldn’t prove it based on only hearsay. They had no concrete evidence to ask a judge for a warrant to search my house.

I usually kept a loaded handgun on me when I was away from home, but this had a strange effect. In addition to making me feel powerful, it made me very paranoid. Anything could happen. Circumstances could turn ugly fast, and I knew it wouldn’t take much provocation for me to stick it in someone’s face. I had a recurring nightmare in which I was forced to pull it out and had to use it—I wouldn’t dare not use it and appear weak. That scared the shit out of me.

One evening I got home from work long after midnight, stripped down to my boxers, and got into bed. But as I began drifting off, a noise outside my window jolted me awake.

Kubiak and I had started a lot of fights in the previous week. Had one of our victims come by to get revenge?

I rolled out of my bed and crawled across the floor to my dresser. I reached behind it and moved my hand along the wall until I felt the wood stock of my sawed-off shotgun.

From a distance, I saw the intruder’s backlit silhouette against the window. Someone was trying to break in. Creeping along the wall, I con- templated every possible scenario. What if they had a gun? What if it was the cops? I took in a deep breath and filled my lungs. Exhaled. I flung the curtain open, weapon ready to explode.

The terrified face meeting the barrel of my shotgun wasn’t that of an enemy.

It was my mother’s.

Horror and frustration flooded me. What was she doing spying on me in the middle of the night? Why couldn’t she leave me the fuck alone? My finger had been heavy on that trigger. “Christian,” she cried. “It’s me, Mamma. My God!”

I lowered the shotgun. Trembling, I lifted open the window.

“Jesus fucking Christ! You can’t sneak up on me like that! What the hell are you doing?”

She sank down into the bushes weeping and quivering. “Why do you have a gun? What life are you living?”

My mother dropped to her knees and wailed, covering her face with her shaking hands. She prayed to God.

“Don’t worry about it. It’s for protection. That’s all. Just in case.” I was genuinely sorry.

“In case of what?” she cried, her eyes pleading. “What did you do to need this kind of protection?”

Any anger I felt toward her evaporated. Her fear and concern were so sincere, so heartfelt; I felt a stab of regret for all that I’d put her through. I felt my mother’s sadness, I wanted to reach out and comfort her, hold her, and tell her it would be okay, that I loved and appreciated her. I knew she cared about me. I knew my father did too. But we’d grown so far apart.

“Mom, go to bed,” I said. “It’s late. No more crying now. Everything’s okay.” I shut the window and heard her continue to sob, followed by a fit of retching.

I stayed awake for hours trembling — shaken to my core and remorseful about how I’d come so close to killing my own mother. I had been just a nervous twitch away from blowing her head clean off her body. But every time I started to drift off, exhausted from my mind racing, the idea that I needed more guns woke me right back up. Tonight had proven that somebody could come for me anytime. I had to be better prepared.

Christian Picciolini is the author of "White American Youth: My Descent into America’s Most Violent Hate Movement—and How I Got Out." Radicalized at the age of 14, PIcciolini went on to become a leader within the notorious Hammerskin Nation, one of the most violent hate groups in the world. After leaving the white-supremacist movement at 22, Picciolini began the painstaking process of rebuilding his life. In 2009, he co-founded Life After Hate, a non-profit organization run by former extremists who are now dedicated to countering racism. He is a TEDx speaker and was awarded an Emmy in 2016 for his role as director and producer of an anti-hate video campaign. He is the co-creator and host of a forthcoming MSNBC documentary, "Breaking Hate," about extricating people from extremist movements.