Media won't quit chasing the phantom of the Trump pivot

The dumb Trump pivot narrative is on its way back 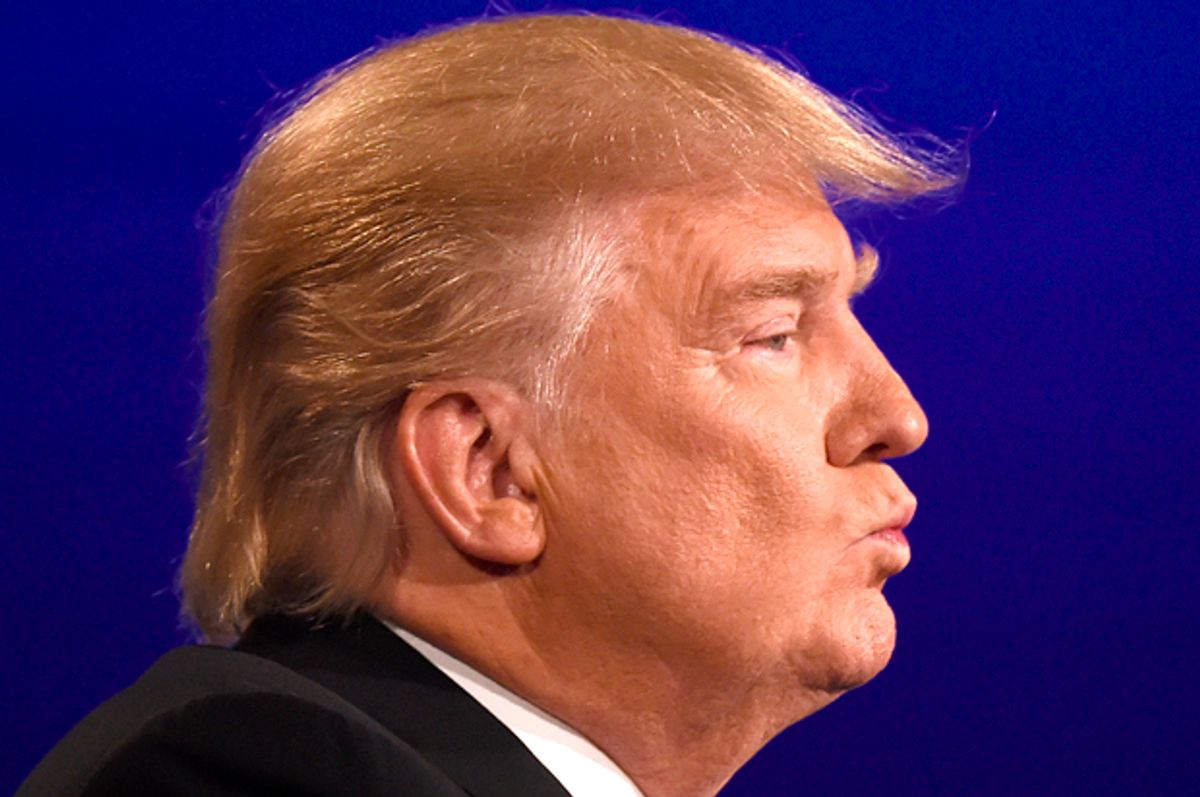 Speaking to the press before a January 10 cabinet meeting, President Donald Trump claimed he had received "letters" from news anchors praising his performance yesterday as "one of the greatest meetings they've ever witnessed." He presented this as evidence that those anchors had changed tact and started to criticize him after they were "called by their bosses," adding, "they probably wish they didn't send us those letters of congratulations."

This seemed obviously false, and in fact it was. Asked to provide evidence to support this claim, the White House circulated a list of video clips from the previous day's coverage and tweets from various journalists, including the comments from CNN's Dana Bash and ABC's Rick Klein discussed below. The president was lying about "letters," but some reporters did provide him with unearned positive coverage yesterday.

One week ago, President Donald Trump appeared to threaten a nuclear strike on North Korea and simultaneously comment on the size of his penis in a tweet seemingly responding to a cable news segment he had been watching at the time. In the days since, journalists, pundits, and even lawmakers have discussedwhether the president is mentally fit to serve (according to the president, he is a “very stable genius”).

But today, the president apparently put those fears to the rest in the eyes of some by successfully making it through a meeting without mentioning -- or metaphorically stepping on -- his member. Several journalists have praised the optics of the meeting, during which Trump and congressional leaders discussed immigration policy. The Trump “pivot” narrative is on the verge of roaring back.

This was a deliberate effort by Republicans to beat back a damaging news cycle for the president, offering up a shred of normalcy with the assumption that some reporters would bite. It worked.

"I'm sure I'm going to get hit for this, and I don't really care. I think that the bottom line is that this is -- a year ago, this is the presidency that many people thought Donald Trump was capable of,” CNN chief political correspondent Dana Bash said after the conclusion of the meeting. “We don't know if this is going to be a results-driven debate, but just the notion of him being in command, of him wanting the cameras in there and wanting the cameras to see him sitting at a table with Democrats and Republicans playing the role of a deal maker -- whether it sees fruition or not -- this is what people who had high hopes for the Trump presidency thought it would be. Meeting after meeting like this."

On MSNBC, Politico’s Jake Sherman commented, “Basically, what Trump did is he got his great TV moment. This was a huge moment for him. He got to dispel that he is some sort of quack who doesn't have mental capacity which many people thought was not true, people who interact with him.”

ABC News political director Rick Klein chimed in on Twitter, praising the transparency of the session and apparently forgetting that the Obama White House did something similar during the health care debate:

And of course, the pundits at Fox News were quick to praise the president.

Recall that the meeting happened in the first place because Trump has effectively taken hostage 800,000 Dreamers, people who came to this country as children. The president decided to strip them of protected status by repealing the Deferred Action for Childhood Arrivals (DACA) program, and Republicans are now trying to use them as leverage to get Democrats to approve a litany of immigration-related demands, including funding for the wall along the southern border Trump previously claimed would be paid for by Mexico. While these negotiations happen, DACA recipients are already losing their protections and living in fear of deportation.

And for all the positive chatter about the meeting’s optics, Trump’s actual actions during the sit-down exposed his famed ignorance. During the meeting, Trump appeared to agree to a Democratic proposal for “a clean DACA bill now, with a commitment that we go into a comprehensive immigration reform procedure,” only to have a Republican congressional leader quickly walk him back. He also nonsensically explained that he defines a “clean” DACA bill as “a bill of DACA... and we also take care of security."

Journalists have spent months eagerly sifting events for the possibility of normal action by Trump. In the past, this hasn’t worked out well for them. As I wrote in August:

For more than a year, every brief moment of normalcy -- every instance in which Trump did not devolve into crude attacks on his opponents during a speech, or fired a controversial staffer, or even managed to avoid tweeting anything “controversial” for a handful of days -- has been accompanied by journalists willing to say that Trump had hit the “reset” button, that now he was finally becoming “presidential.” Inevitably, those journalists found themselves with egg on their faces in a matter of days, as Trump reverted to form and proved those moments anomalies, not the beginnings of a trend.

I understand why reporters and commentators might be overeager to declare that change is on the way. It is uncomfortable to live in a world in which the president of the United States is an unhinged egomaniac who offers sympathy for literally the worst people in American society and lashes out at the institutions that support democratic governance. It makes sense that those whose jobs involve trying to make sense of this situation might grasp for anything that could reestablish normalcy.

There’s also a bias in the press toward a change in storylines. Reporters strive to identify“new news,” and as such are susceptible to over-reading discrete instances as the start of a new trend. “Trump is doing something new” is a much more interesting story to tell than “Trump is doing the same thing,” and so it’s a story that gets told disproportionately to the reality.

But the reality is, things aren’t normal because Trump is the president -- no shuffle in the White House or effort to change the message can change that. This is who he is. He rose to political prominence by questioning the legitimacy of the first black president, started his campaign with a racist rant against Mexicans, and was elected in spite of the publication of a tape in which he bragged about sexually assaulting women. He obviously cares more for his private interest than he does for public service. He values people and organizations solely on the basis of whether they support him personally. He has shown over and over again that he lacks either the intellect or the temperament to do his job. He is 71 years old -- none of this is going to change.

Start the clock. It won’t be long before the next presidential catastrophe.