Children understand far more about other minds than long believed 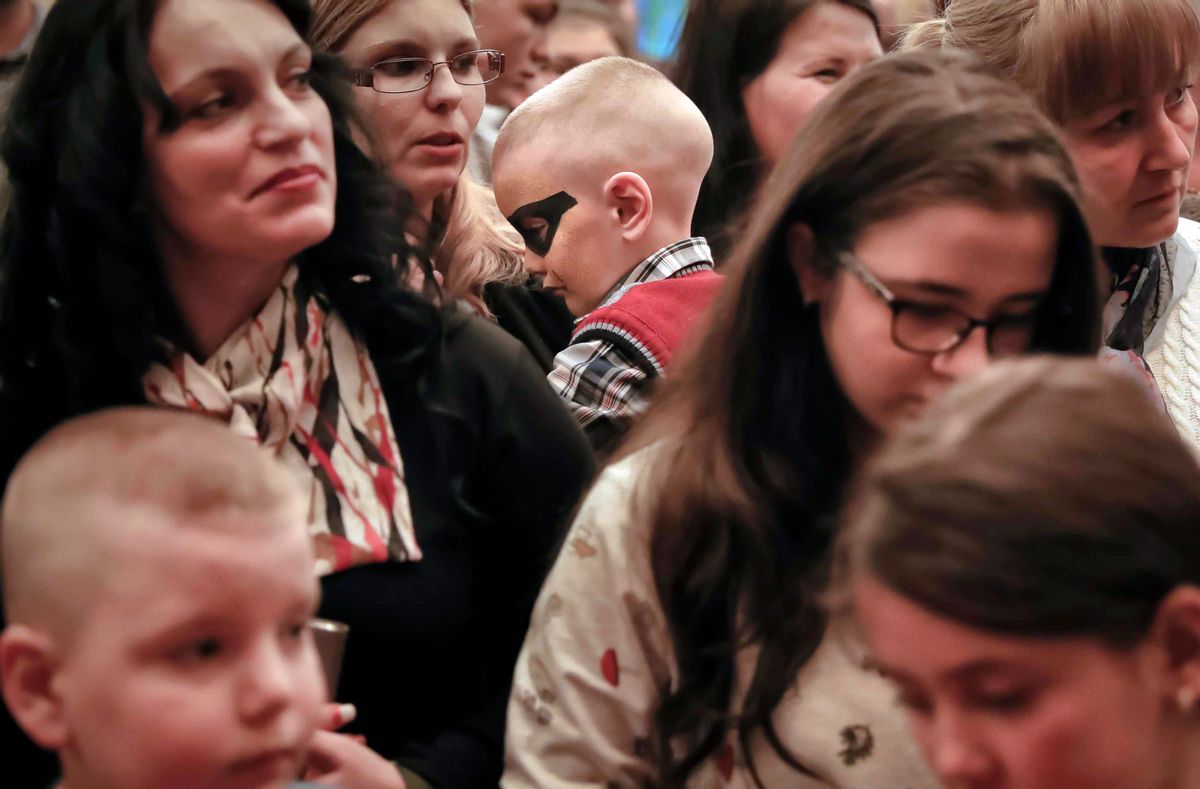 Until a few decades ago, scholars believed that young children know very little, if anything, about what others are thinking. Swiss psychologist Jean Piaget, who is credited with founding the scientific study of children’s thinking, was convinced that preschool children cannot consider what goes on in the minds of others.

The interviews and experiments he conducted with kids in the middle of the 20th century suggested that they were trapped in their subjective viewpoints, incapable of imagining what others think, feel or believe. To him, young children seemed oblivious to the fact that different people might hold distinct viewpoints or perspectives on the world, or even that their own perspectives shift over time.

Much of the subsequent research on early childhood thinking was highly influenced by Piaget’s ideas. Scholars sought to refine his theory and empirically confirm his views. But it became increasingly clear that Piaget was missing something. He seemed to have gravely underestimated the intellectual powers of very young kids — before they can make themselves understood by speech or even intentional action. Researchers began to devise ever more ingenious ways of figuring out what goes on in the minds of babies, and the resulting picture of their abilities is becoming more and more nuanced.

Consequently, the old view of children’s egocentric nature and intellectual weaknesses has increasingly fallen out of favor and become replaced by a more generous position that sees a budding sense not only of the physical world but also of other minds, even in the “youngest young.”

Historically, children didn’t receive much respect for their mental powers. Piaget not only believed that children were “egocentric” in the sense that they were unable to differentiate between their own viewpoint and that of others; he was also convinced that their thinking was characterized by systematic errors and confusions.

For example, the children he interviewed seemed unable to disentangle causes from their effects (“Does the wind move the branches or do the moving branches cause the wind?”) and could not tell reality apart from superficial appearances (a stick submerged halfway into water looks, but is not, bent). They also fall prey to magical and mythical thinking: A child might believe that the sun was once a ball that someone tossed up into the sky, where it grew bigger and bigger. In fact, Piaget believed that children’s mental development progresses in the same way historians believe human thought progressed over historical time: from mythical to logical thinking.

Piaget firmly believed kids were focused entirely on their own actions and perceptions. When playing with others, they don’t cooperate because they do not realize there are different roles and perspectives. He was convinced that children literally cannot “get their act together:” instead of playing cooperatively and truly together, they play side by side, with little regard for the other. And when speaking with others, a young child supposedly cannot consider the listener’s viewpoint but “talks to himself without listening to the others.”

Piaget and his followers maintained that children go through something like a dark ages of intellectual development before slowly and gradually becoming enlightened by reason and rationality as they reach school age. Alongside this enlightenment develops an ever-growing understanding of other persons, including their attitudes and views of the world.

Today, a very different picture of children’s mental development emerges. Psychologists continually reveal new insights into the depth of young children’s knowledge of the world, including their understanding of other minds. Recent studies suggest that even infants are sensitive to others’ perspectives and beliefs.

Part of the motivation to revise some of Piaget’s conclusions stemmed from an ideological shift about the origin of human knowledge that occurred in the second half of the 20th century. It became increasingly unpopular to assume that a basic understanding of the world can be built entirely from experience.

This was in part instigated by theorist Noam Chomsky, who argued that something as complex as the rules of grammar cannot be picked up from exposure to speech, but is supplied by an innate “language faculty.” Others followed suit and defined further “core areas” in which knowledge allegedly cannot be pieced together from experience but must be innate. One such area is our knowledge of others’ minds. Some even argue that a basic knowledge of others’ minds is not only possessed by human infants, but must be evolutionarily old and hence shared by our nearest living relatives, the great apes.

To prove that infants know more in this realm than had been acknowledged, researchers needed to come up with innovative ways of showing it. A big part of why we now recognize so much more of kids’ intellectual capacities is the development of much more sensitive research tools than Piaget had at his disposal.

Instead of engaging toddlers in dialog or having them execute complex motor tasks, the newer methods capitalize on behaviors that have a firm place in infants’ natural behavior repertoire: looking, listening, sucking, making facial expressions, gestures and simple manual actions. The idea of focusing on these “small behaviors” is that they give kids the chance to demonstrate their knowledge implicitly and spontaneously — without having to respond to questions or instructions. For example, children might look longer at an event that they did not expect to happen, or they might show facial expressions indicating that they have empathy with another.

When researchers measure these less demanding, and often involuntary, behaviors, they can detect a sensitivity to others’ mental states at a much younger age than with the more taxing methods that Piaget and his disciples deployed.

In the 1980s, these kinds of implicit measures became customary in developmental psychology. But it took a while longer before these tools were employed to measure children’s grasp of the mental lives of others. Recent studies have revealed that even infants and toddlers are sensitive to what goes in others’ minds.

In one series of experiments, a group of Hungarian scientists had six-month-old babies watch an animation of the following sequence of events: A Smurf observed how a ball rolled behind a screen. The Smurf then left. In its absence, the infants witnessed how the ball emerged from behind the screen and rolled away. The Smurf returned and the screen was lowered, showing that the ball was no longer there. The authors of the study recorded the infants’ looks and found that they fixated longer than usual on the final scene in which the Smurf gazed at the empty space behind the barrier — as if they understood that the Smurf’s expectation was violated.

In another set of experiments, my colleagues at the University of Southern California and I found evidence that toddlers can even anticipate how others will feel when their expectations are disappointed. We acted out several puppet shows in front of two-year-old children. In these puppet shows, a protagonist (Cookie Monster) left his precious belongings (cookies) on stage and later returned to fetch them. What the protagonist did not know was that an antagonist had come and messed with his possessions. The children had witnessed these acts and attentively watch the protagonist return.

We recorded children’s facial and bodily expressions. Children bit their lips, wrinkled their nose or wiggled in their chair when the protagonist came back, as if they anticipated the bewilderment and disappointment he was about to experience. Importantly, children showed no such reactions and remained calm when the protagonist had seen the events himself and thus knew what to expect. Our study reveals that by the tender age of two, kids not only track what others believe or expect; they can even foresee how others will feel when they discover reality.

Studies like these reveal that there is much more going on in toddlers’ and even infants’ minds than was previously believed. With the explicit measures used by Piaget and successors, these deeper layers of kids’ understanding cannot be accessed. The new investigative tools demonstrate that kids know more than they can say: when we scratch beneath the surface, we find a fledgling understanding of relations and perspectives that Piaget probably did not dream of.

Old ways have value, too

Despite these obvious advances in the study of young children’s thinking, it would be a grave mistake to dismiss the careful and systematic analyses compiled by Piaget and others before the new tests dominated the scene. Doing so would be like throwing out the baby with the bathwater, because the original methods revealed essential facts about how children think – facts that the new, “minimalist” methods cannot uncover.

There’s no consensus in today’s community about how much we can infer from a look, a grimace or a hand gesture. These behaviors clearly indicate a curiosity about what goes on in the mind of others, and probably a set of early intuitions coupled with a willingness to learn more. They pave the way to richer and more explicit forms of understanding of the minds of other. But they can in no way replace the child’s growing ability to articulate and refine her understanding of how people behave and why.

Piaget may have underestimated infants’ cognitive powers, perhaps for lack of modern tools. But his insights into how a child gradually comes to grasp the world around her and understand that she is a person among a community of other persons remain as inspiring as they were 50 years ago. Today’s challenge for us developmental scholars is to integrate the new with the old, and understand how infants’ sensitivity to other minds gradually develops into a full-blown understanding of other persons as distinct from, and yet similar to, oneself.