Remembering the Cranberries frontwoman, who passed away Monday at 46 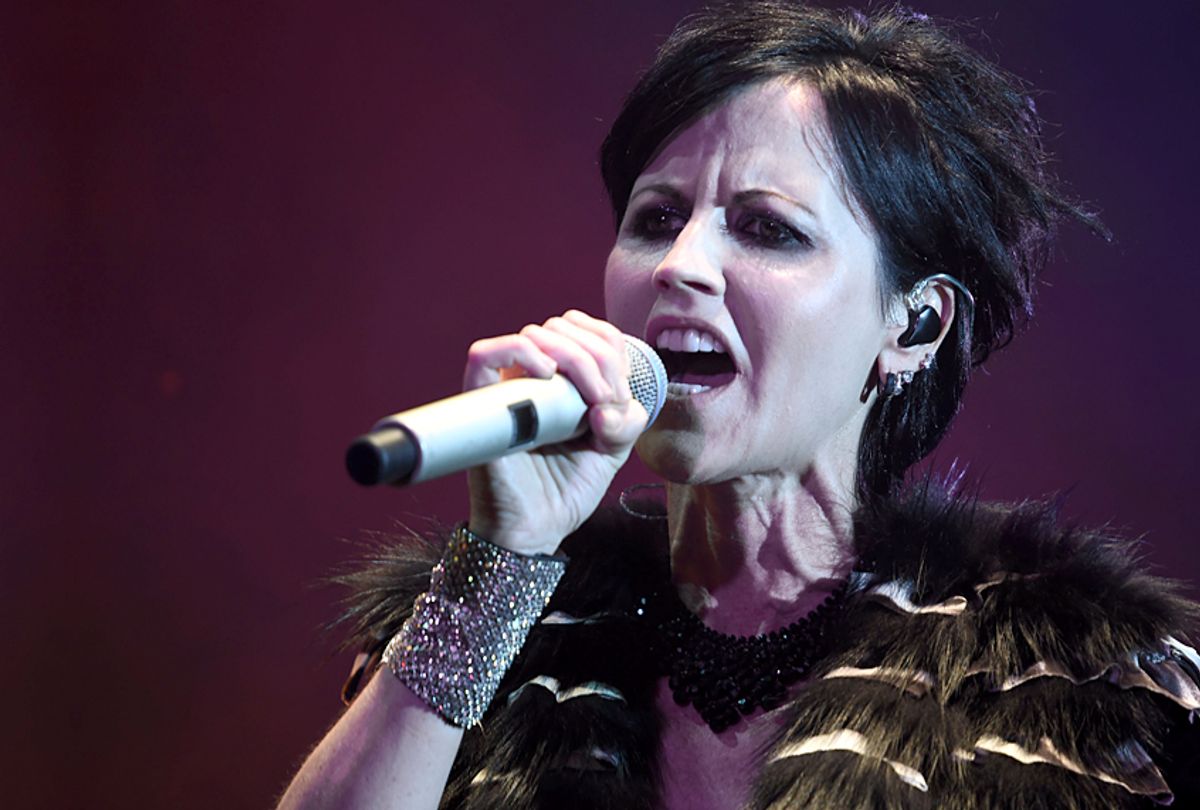 On Monday, tributes poured in for Cranberries frontwoman Dolores O'Riordan, who passed away unexpectedly while in London for a recording session. She was 46. Her long-time bandmates tweeted that they were "devastated on the passing of our friend" and called her "an extraordinary talent. . . . The world has lost a true artist today."

Past tourmates R.E.M. and Duran Duran expressed condolences, as did one-time Cranberries producer Stephen Street, while a slew of musician spoke of her singular impact. The President of Ireland, Michael D. Higgins, even immediately issued heartfelt words of condolence about O'Riordan, who made her home city of Limerick immensely proud. (As of Tuesday morning, the city had opened a book of condolence under her name.)

Over and over again, one thing people kept mentioning was the power of O'Riordan's voice. She was the kind of singer that didn't need to force a connection with audiences. Her vocals possessed magnetism that drew people into the Cranberries' universe, courtesy of an enveloping timbre underlined with effortless vulnerability and steely strength. There was never any doubt O'Riordan meant every word she was singing.

This was clearly a natural gift. In 1991, when John Peel played the Cranberries' early song, "Them," her voice possessed an ethereal, haunted texture that resonated. That same keening tone marked the band's Smiths-reminiscent 1993 debut "Everybody Else Is Doing It, So Why Can't We?" and the 1994 follow-up "No Need To Argue." (The latter record's "The Icicle Melts" is even a nod to Cocteau Twins.) Yet she could belt with the best of them: Even before the Cranberries adopted a tougher sound on 1996's "To The Faithful Departed," O'Riordan inspired the audience to crowd-surf their hearts out to "Dreams" at Woodstock 1994.

Indeed, as a singer, she was both versatile and dominant. O'Riordan excelled at using dynamics — on "Pretty," her muted restraint amplifies the song's ominous, warning-shot lyrics, while the low register dips of "Dreaming My Dreams" are sublime — and guided the Cranberries' diverse moods and styles. "Animal Instinct" is a crystalline nod to shimmering '80s U.K. pop; "When You're Gone" is a delicate doo-wop song; and "Ode To My Family" is a whispery ballad. In contrast, "Salvation" hews toward marbled hard rock, and "Forever Yellow Skies" is a raucous, galloping Irish-rock anthem.

O'Riordan was also known for unique enunciation, in part due to her Irish accent (which she never hid while singing) and penchant for unorthodox syllabic emphasis. There's the indelible "Zombie," of course, whose sing-songy lyrics and exaggerated turns of phrase obscured the song's somber origins. (The tune was written to honor two boys killed by an IRA bombing.) On the underrated single "Ridiculous Thoughts," she trills in a chirping gargle that gives way to an unmistakable, repeated demand tinged with urgency — "You're going to have to hold on!"—and a climactic lyric with a twist: "You're going to have to hold on to me!"

The strength of O'Riordan's voice could almost overshadow her compositional skills. But she also penned the Cranberries' lyrics and, often in collaboration with Cranberries lead guitarist Noel Hogan, wrote the band's music. O'Riordan was the architect of the act's sound — and, by extension, the massive success. In a decade where women made great strides with mainstream visibility, but still had to contend with grunge's boys club, she was one of the fiercest creative leaders. "The Cranberries were pinnacle in showing me that it was possible to fully embrace masculine and feminine energy in one cohesive sound," Foster the People tweeted in the wake of her death. "She was a true pioneer."

In his remembrance, Street detailed O'Riordan's dramatic shift as the Cranberries' popularity exploded, especially during the band's concerts. "The shrinking 'wall flower' had been replaced with a strong, determined front person who could now look the audience in the eye and say ‘Look at me, listen to me,'" he wrote. Live, O'Riordan cut a striking and charismatic figure onstage, and didn't suffer fools gladly — an attitude she exuded in interviews as well.

"The only thing about being a girl and the lead singer and main writer is that you're the one who the guy tries to fool to get into your pants," she told Rolling Stone in 1995. "And that's happened to me countless amounts of times. There is a lot of chauvinism in the music industry. I'm glad to be married — and that's one of the reasons — so that I don't feel exposed anymore that way."

Today, it's easy to forget how massive the Cranberries were in the '90s. "Zombie" spent six weeks at No. 1 on the Billboard Modern Rock charts, one of eight chart hits the band had at alternative radio. And if their Top 40 chart placement seems anemic — only "Linger" and the double A-side "When You're Gone / Free To Decide" hit the Top 40 — it's only because "Everybody Else Is Doing It, So Why Can't We?" shipped quintuple platinum and "No Need To Argue" sold a whopping seven million copies. People were buying the band's records, not just dabbling in the singles.

The Cranberries' reputation was aided by their pop culture ubiquity; in fact, their songs were a staple of teen-geared movies and TV shows. "Dreams" soundtracked an angst-ridden moment from "My So-Called Life" protagonist Angela Chase, and a first kiss on "Beverly Hills 90210." During the movie "Clueless," smarmy Elton uses the band as an excuse to get out of class: "I can't find my Cranberries CD. I gotta go to the quad before somebody snags it."

These nods made perfect sense: Although there was no age ceiling for the band's fandom, of course, O'Riordan had a particular knack for capturing that time of life when emotions quiver on the surface with the delicious idea that your entire future is unfolding in front of you. On "Dreams," when she sings "Oh, my life, is changing every day — in every possible way," it captures the combination of ecstasy, fear, confusion and excitement intrinsic to adolescence.

This sincerity no doubt explains why the Cranberries have continued to permeate pop culture. "Community" used "Linger" as a basis for parody in the 2010 episode "Anthropology 101," while Shakira headbanged to and sang "Zombie" with Trevor Noah on a 2017 episode of "Carpool Karaoke: The Series." And although the band had to cancel last year's U.S. tour dates — the first run since 2012 — due to O'Riordan's back issues, they worked to stay in the public eye: In a memorable 2015 episode of "The Bachelorette," the band appeared as entertainment on an elaborate date.

In recent years, O'Riordan hasn't had an easy time. Within a wrenching 2013 Independent profile, she revealed she was sexually abused as a child. The following year, she was arrested after an incident on a plane; split from her husband of two decades; and revealed she had bipolar disorder. In hindsight, knowing some of this information made certain corners of O'Riordan's work with the Cranberries' take on a more heartbreaking tone.

But these troubles didn't diminish her voice. Last year, the band released "Something Real," a reimagining of their biggest hits with orchestral flourishes. These kinds of records are generally extraneous, but the collection is lovely, and adds new dimensions to familiar hits. What's more heartbreaking is the quality of the record's new songs, such as "The Glory," an aching and gorgeous song painted with ornate strings. With her death, O'Riordan was an incredible voice silenced too soon.