No mercy: Eliza Dushku, James Cameron and responsibility in our age of reckoning

After Eliza Dushku's account of molestation on "True Lies," James Cameron fails to admit he's part of the problem 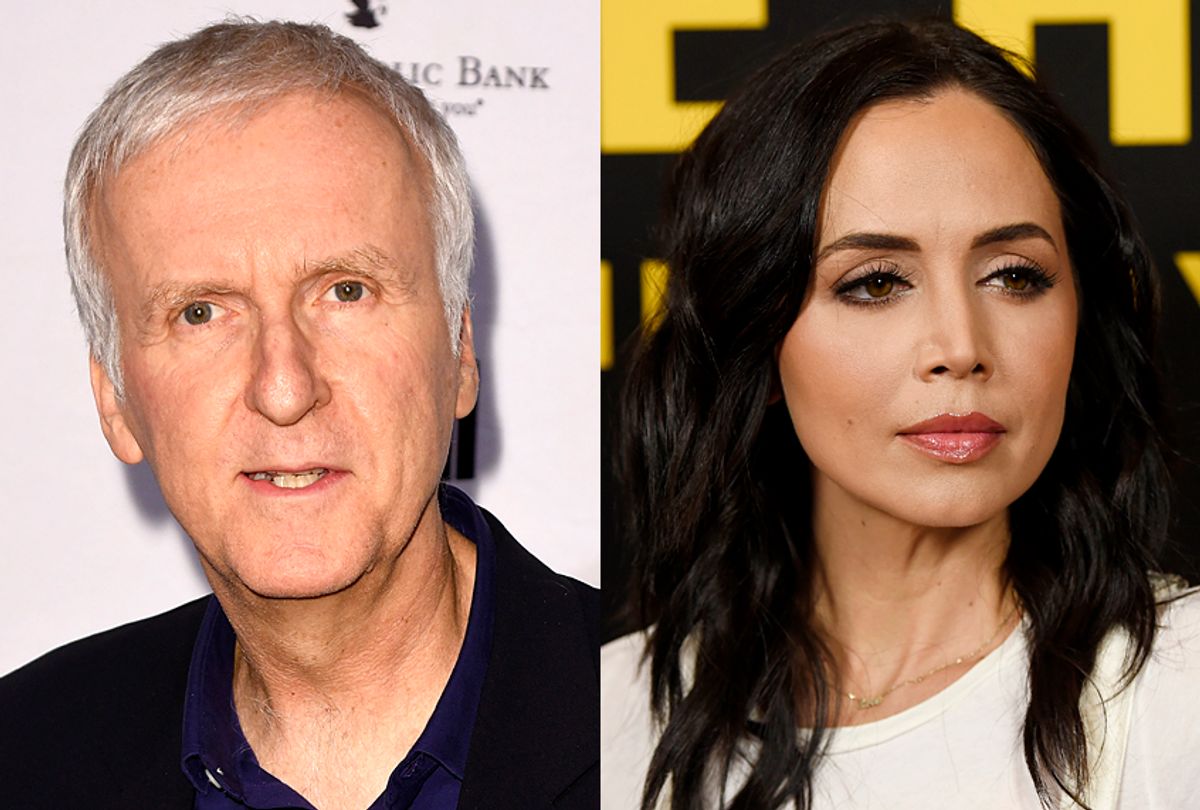 Television’s scripted heroines don’t have the luxury of holding back, because they know they’re operating in a man’s world. Any windows of opportunity are small and tend be limited, leading them to strike strategically, quickly, forcefully and with purpose.

That’s how they tend to be written, anyway. Behind those fictional women are people; we know this and forget nevertheless. To a significant slice of the public introduced to Eliza Dushku via “Buffy the Vampire Slayer,” she will always be known as Faith, a dark warrior seeking redemption.  Some know her as Echo from “Dollhouse" or as Missy Pantone from “Bring It On.” Very different characters, but each demonstrates a tough of invulnerability, if not outright invincibility, which is only part of the reason her January 13 Facebook post  caught so many by surprise.

It opens with, “When I was 12 years old, while filming ‘True Lies’, I was sexually molested by Joel Kramer, one of Hollywood’s leading stunt coordinators.”

In response to Dushku's account on Sunday Worldwide Production Agency announced it would no longer represent Kramer.

Dushku’s description of what happened to her is detailed, and shocking, and the latest accusation of so many that have come to light since October. In the post, she recalls how Kramer groomed her and her parents, eventually persuading her on-set guardian to allow her to spend the day with him, luring her to his hotel room under the pretense of watching a movie (“Coneheads,” she recalls) and rubbing himself against her.

She wrote, “He spoke these words: ‘You’re not going to sleep on me now sweetie, stop pretending you’re sleeping,’ as he rubbed harder and faster against my catatonic body.”

Remember, she was 12 when this happened.

James Cameron, the director of “True Lies,” would have been just shy of 40.

Cameron made a statement about Dushku’s post to members of Television Critics Association later that day, saying that he was unaware that the abuse was occurring. The director appeared at the event to promote his upcoming AMC Visionaries documentary series “James Cameron’s Story of Science Fiction.”

“It’s just heartbreaking that it happened to her. I mean, I know the other party and not well. He hasn’t worked for me since then,” Cameron told reporters, adding that he supports creating “a safe avenue for people to speak up . . . that anybody who might be, you know, a predator or an abuser knows that that mechanism is there and . . . that there will be consequences, you know.”

“Had I known about it, there would have been no mercy,” he added. “And now, especially that I have daughters, there would really be no mercy now.”

As if to pre-empt any queries as to why he, in his capacity as the director of a major Hollywood action film, had no idea his stunt coordinator molested the child actor in his employ, Cameron also stated, “Directors are historically pretty oblivious to the interpersonal things that are happening on their set because they are just focused and I’m probably one of the worst offenders in that being focused on what I’m doing creatively.”

Another arena in which Cameron is in the running for worst offender is his history of poorly treating women on his sets, and in his personal life. This image clashes against the contributions he’s made to the cinematic pantheon of feminist action heroes.

Cameron is the man who gave us the “Terminator” franchise’s Sarah Connor and shaped Ripley into the main badass of Ridley Scott’s “Alien” franchise — two reasons that his statement, appears to have been accepted without much critique.

Cameron is also the guy who nicknamed Kate Winslet “Kate Weighs-a-Lot” during the filming of “Titanic” in 1997; who insisted Neytiri, the female lead character of 2009’s “Avatar,” “have tits”; and as recently as August, called Gal Gadot’s portrayal of Wonder Woman “a step backwards” because she had the temerity to be attractive and strong. “Wonder Woman” is directed by Patty Jenkins, who did not let Cameron’s critique go by without a response.

As the conversion about sexual harassment, rape and assault in the entertainment industry evolves, Cameron’s carefully crafted statement is another example of continued refusal to accept culpability among the people who allowed such behavior to run rampant.

Audiences, actors, directors and producers want to believe that the change is real. Conversations about #MeToo, awareness of sexual assault and harassment in the industry remains top of mind, especially in light of developing stories about toxic work environments lorded over by abusive showrunners such as the CW’s Andrew Kreisberg and Brad Kern, who is still overseeing “NCIS: New Orleans.”

Discussions about an increase in significant storylines involving women and the importance of women attaining more power behind the scenes in media have dominated the TCA Winter Press Tour. A number of panels that have taken place over the last two weeks have provoked questions about evolving perspectives on the part of aggressors and the industry at large.

One of the top stories on that topic happened away from the conference. In a podcast episode of  “Harmontown” “Rick and Morty” co-creator Dan Harmon not only apologized to Megan Ganz, a writer he harassed when he was the showrunner for “Community,” but specifically copped to why he did it. “I certainly wouldn’t have been able to do it if I had any respect for women,” he said.

The significance of Harmon’s apology is noteworthy.

Cameron is one of the entertainment industry’s most powerful figures. But instead of ceding some of that power to take responsibility for his part in creating a world that made #MeToo necessary, he instead mansplained why it’s important to the journalists in the room.

“Whenever there’s a male in a position of power and he’s got a piece missing, and doesn’t understand the consequences of what he’s doing, maybe out of this can come some education that can pull some men who would otherwise go down that path back from the brink as well,” he told reporters, oblivious to the irony.

He continued, “Because I think a lot of it has to come from some kind of lack of empathy, that they are clearly not feeling what this is going to mean to this person further down the line, you know.”

Cameron’s declarations of empathy and insistence of knowing nothing about what happened to Dushku may be genuine. No concrete evidence has been brought to light indicating anything differently. But given that directors set the tone for behavior on a set, Cameron is at the very least responsible for enabling — or creating — the environment where such abuses can happen.

When an action coordinator has nicknamed the minor on set “Jailbait” and has taken calling her that in front of other adults, surely that’s something the director would have been made aware of.

Sue Booth-Forbes, Dushku’s legal guardian on the “True Lies” set, inferred as much in a statement published on Deadline that incident was reported to a person in authority. “I was met with blank stares and had the sense that I wasn’t telling that person anything they didn’t already know.”

Maybe that person was too focused to do anything about it. Or maybe the person beneath that person in the chain of command didn’t want to interrupt that focus.

Either way, Booth-Forbes does not name the individual to whom she reported the behavior. But she does make the nature of production operations very clear.

“As I look back on the experience, there should never have been a child on that set because of the misogyny, sexual language and attitudes of the crowd of immature white men who made up the vast majority of the crew,” she told Deadline. “[Dushku] was treated like one of the boys, not a 12-year-old girl.”

And Dushku paid heavily for speaking up at the time. After an adult confronted Kramer — presumably Booth-Forbes, though the actor doesn’t identify the person — she says she was injured in a stunt gone awry resulting in broken ribs. “It was Joel Kramer who was responsible for my safety on a film that at the time broke new ground for action films,” she wrote. “On a daily basis he rigged wires and harnesses on my 12 year old body. My life was literally in his hands: he hung me in the open air, from a tower crane, atop an office tower, 25+ stories high. Whereas he was supposed to be my protector, he was my abuser.”

In success, the most fortunate actors become custodians of inspirational roles greater than who they are as individuals. So it is with Dushku. “I like to think of myself as a tough Boston chick, in many ways I suppose not unlike Faith, Missy, or Echo,” she wrote in her post.

That is an honor, but such a mantle holds a weight, too. Highly iconic characters can influence the roles made available to a performer, or even derail their careers over the long haul.

Writers, producers and directors get the benefit of being able to both take credit for their creations while claiming a distance between past work and current and future endeavors.

But make no mistake, men like Cameron do need to claim the starring roles they played in allowing abusers to operate and thrive if they truly desire a better future. For the time being Cameron seems unable to take that step. After all, he’s conceptualized brave women capable of holding their own against cyborgs, aliens and heartless corporate mercenaries.

Sexism isn’t science fiction. Perhaps that’s why one of Hollywood’s most influential directors is unable to acknowledge his role in perpetuating it.