White supremacists to Trump: Welcome back! We still love you

Daily Stormer proclaims Trump is "on the same page as us"; David Duke says president has restored "a lot of love" 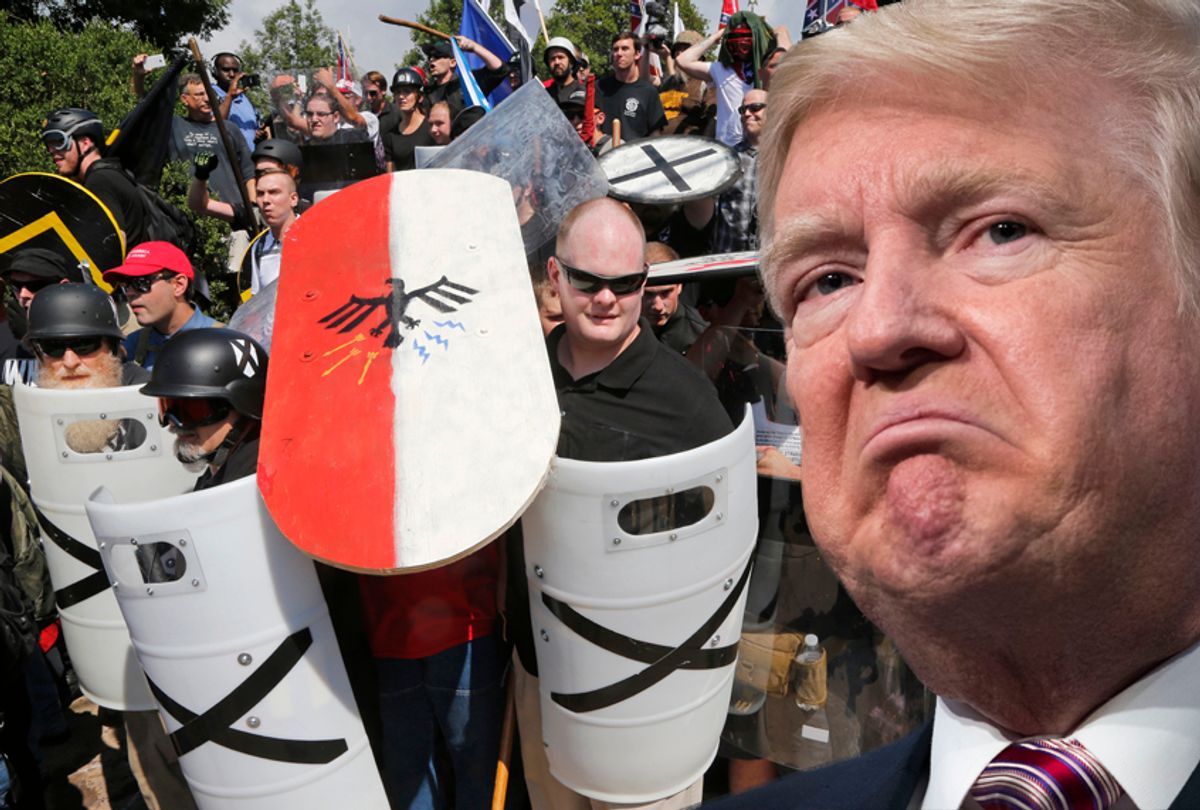 Donald Trump is a white supremacist. The evidence in support of this conclusion is overwhelming. His infamous comments last Thursday suggesting that Haiti, El Salvador and the many countries of Africa are "shitholes" -- and that immigrants from a predominantly white country such as Norway are preferable -- is just the most recent example of Trump's racism.

Too many voices in the mainstream news media remain in denial, or are simply dishonest, about this fact. Instead of stating the obvious about Trump's racist attitudes, beliefs and behavior, they suggest that "we can't know what is in his heart," ask rhetorical questions ("Is Donald Trump a racist?") and offer evasive qualifiers: "Is Donald Trump making the country's racial tensions worse?" In a moment better suited for a "Saturday Night Live" skit, reporters ask Donald Trump if he is a racist -- as though he or most other racists would admit to that in public.

Predictably, the mainstream media will send more reporters to ask Trump supporters in the so-called heartland whether they still support him after these most recent hateful and bigoted comments. The answer will almost always be yes.

However, there is one group of people who are honest about Donald Trump. White supremacists know that Donald Trump is one of their tribe. The Daily Stormer, the white supremacist website founded by neo-Nazi Andrew Anglin, described Trump's comments last week as "encouraging and refreshing," because they suggest that "Trump is more or less on the same page as us with regards to race and immigration."

The Stormer post, likely written by Anglin himself, went on to discuss the perceived superiority of immigrants from Asian countries, who do not "create social problems . . . on the scale of other nonwhites, because they don't commit the crimes and are not leeches." But the Stormer remains confident that its social vision is the same as Trump's: an all-white America.

I think it is clear that Trump’s ideal America is the one he grew up with in the 1950s. And the closer we get to that, the closer we are to our own goals of a white race-state.

[If] people who think like us take power, [Asians] aren’t going to throw a fit about being forced to leave. We can give them a year to make arrangements, and they will just go, for the most part without even complaining. A certain small percentage of them may be allowed to stay, though of course not with citizenship or citizen’s rights. Anyway, it’s a non-issue right now.

The real issue is all of these shitty brown people who come to the country exclusively to parasite off of us.

The Daily Stormer's renewed embrace of Trump's policies is part of a larger pattern. The Ku Klux Klan's official newspaper endorsed Trump's candidacy. Longtime Klan leader David Duke and other prominent white supremacists have correctly identified Trump as an ally who has helped to mainstream their views. Last week, Duke showered praise on Trump, via Twitter, for his recent comments about "shithole" nations.

Just as the most ardent Trump supporters were about to give up on him in despair -- he restores a lot of love in us by saying blunt but truthful things that no other President in our lifetime would dare say! NO DACA! NO COMPROMISE - NO Sh**thole America! Hail Trump!

Throughout his campaign and his presidency, Trump has surrounded himself with white supremacist advisers who pursue their goals under the cloak of "economic nationalism." He has rewarded these followers by declaring that there were "very fine people" among the domestic terrorists who ran amok and committed lethal violence in Charlottesville, Virginia, last summer. Trump and his administration have withdrawn federal resources from the fight against white supremacists and other right-wing domestic terrorist groups.

The hard-right turn of the Republican Party and its embrace of white supremacy has been decades in the making. Donald Trump's presidency is simply the next iteration in the mainstreaming of overt white supremacy in the post-Civil Rights era.

Social scientists such as Christopher Parker and others have shown that the rise of the Tea Party movement in response to Barack Obama's presidency was a critical moment in the devolution of the Republican Party and its transformation into a de facto white identity organization.

Ultimately, Trump's rise to power is a function of white America's anxieties about maintaining power in an increasingly cosmopolitan and diverse world. In this way (and others), Donald Trump is the leader of a death cult of whiteness.

There is a deep ugliness in America. The shadow of white supremacy that hovers over the country has existed since before the founding. In the present, this dark shadow has taken the human form of Trump and his supporters. He is a 21st-century version of Bull Connor who has -- instead of a megaphone -- Twitter, Fox News and the right-wing echo chamber, tens of millions of supporters and control of the United States government through the Republican Party. No outside force can save America from this darkness. The American people must find a way to save themselves.