GOP House leader, who once accused Trump of being on Putin's payroll, is now his candyman. This won't end well 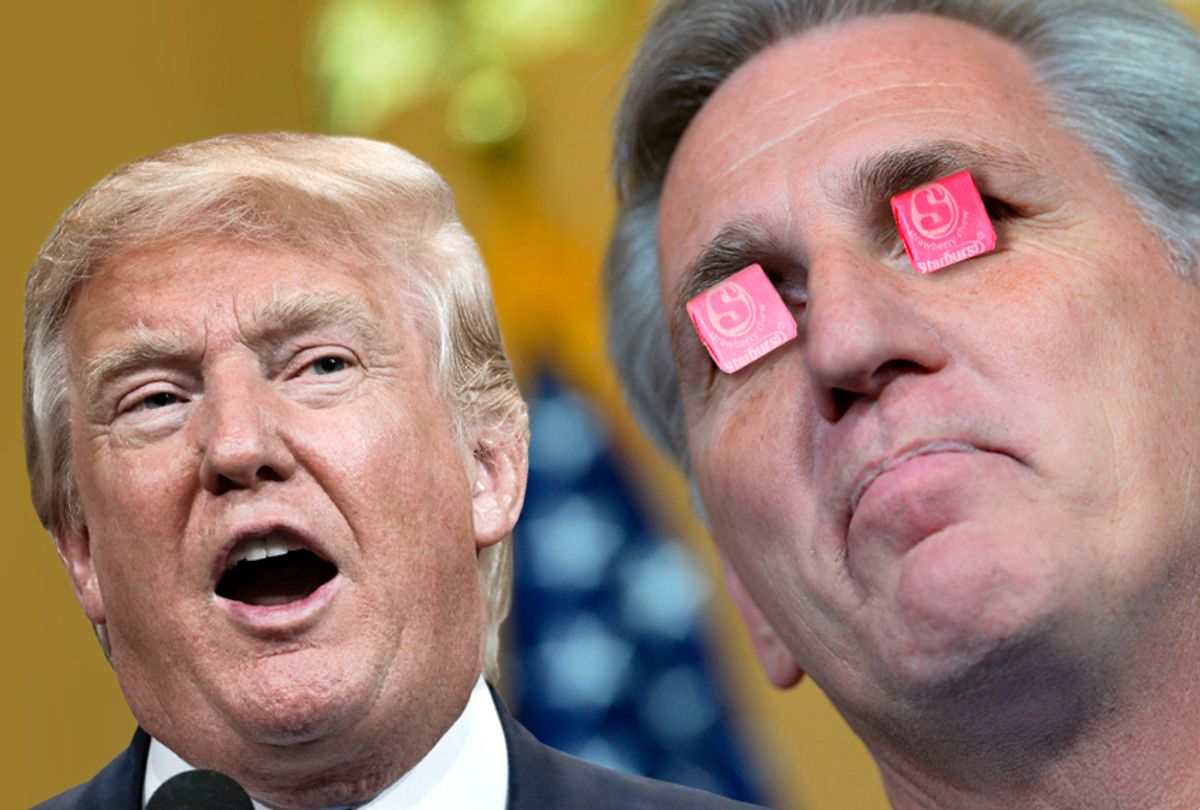 On the eve of the Martin Luther King holiday, President Donald Trump visited Trump International Golf Club for his usual weekend promotional appearance at one of his properties. He stopped off to assure the gathered press that he is not a racist.

Standing next to Trump in that clip is his newest BFF and chief enabler, House Majority Leader Kevin McCarthy, R-Calif. McCarthy was present in the infamous White House "shithole" meeting, but has not weighed in on what exactly he saw and heard. Unlike the Hawaii state government Trump extols in that comment, the president has refused to take responsibility for the international furor resulting from his reported actions. Trump needn't worry that McCarthy will tell the truth because of personal integrity or lack of loyalty. But he ought to be a little bit concerned that his pal will let something slip inadvertently. They don't call him Kevin "Loose Lips" McCarthy for nothing.

McCarthy first came to national attention when John Boehner resigned from the speakership and he was assumed to be the heir apparent. He is a prolific fundraiser and had worked his way up through the leadership hierarchy the old-fashioned way -- by doing favors for his fellow Republican congressmen. Unfortunately, McCarthy is not as well known for his judgement or intellect, and he made one of the most memorable gaffes in congressional history. He appeared on Sean Hannity's Fox News show and said that he was developing a "fight and win strategy" and used this as an example:

Everybody thought Hillary Clinton was unbeatable, right? But we put together a Benghazi special committee, a select committee. What are her numbers today? Her numbers are dropping. Why? Because she’s untrustable. But no one would have known any of that had happened, had we not fought.

Setting aside the neologism, McCarthy effectively admitted that the endless Benghazi investigations were political. Not that everyone didn't know that already, but you can't have the prospective speaker of the House admitting that he is persecuting a rival for political gain. It's a bad look, and it cost McCarthy the job.

More recently, McCarthy was reported to have made a stunning gaffe in June of 2016, telling a group of fellow congressmen: “There’s two people I think Putin pays: Rohrabacher and Trump." The first name mentioned refers to Rep. Dana Rohrabacher, a fellow California Republican who is known to be a vocal Putin apologist.

When word of this comment was leaked to the media last May, McCarthy at first denied saying it -- until he was played a recording of the event, which also featured Speaker Paul Ryan swearing everyone in the room to secrecy. Here is The Washington Post's account:

Before the conversation, McCarthy and Ryan had emerged from separate talks at the Capitol with Ukrainian Prime Minister Vladimir Groysman, who had described a Kremlin tactic of financing populist politicians to undercut Eastern European democratic institutions.

News had just broken the day before in The Washington Post that Russian government hackers had penetrated the computer network of the Democratic National Committee, prompting McCarthy to shift the conversation from Russian meddling in Europe to events closer to home.

Some of the lawmakers laughed at McCarthy’s comment. Then McCarthy quickly added: “Swear to God.”

Like Trump, he doesn't seem to have learned discretion. Unlike Trump, he knows how to curry favor with important people. Indeed, that seems to be his one talent.

Trump either doesn't know about that Putin comment or has chosen to forget about it, because McCarthy has become one of the most powerful Trump enablers on Capitol Hill. He apparently decided that being in league with a man he suspects of being on Putin's payroll is just part of the job of majority leader. According to a new profile by Josh Dawsey and Robert Costa in the Post, he has taken to it with relish.

They recount the astonishing little anecdote that McCarthy once observed that Trump, like many six-year-olds, only likes the pink and the red Starburst candies, but none of the other colors. So McCarthy got a staff member to buy some in bulk and put the president's favorites in a jar with McCarthy's name on it. They apparently have been chatting on the phone regularly since the campaign and often watch movies together where they both talk all the way through. Trump calls him "my Kevin."

At the recent GOP Camp David retreat to talk about the impending midterm elections, McCarthy was lauded for his ability to communicate with Trump using colorful pictures and big charts to show him the lay of the land in this crucial year. He urged the president to do all he can to raise money for Republicans. There is no word about whether McCarthy also whispered in the president's ear that no Republicans actually want him to campaign for them, but it's unlikely. If there's one thing that sycophantic courtiers understand better than anyone, it's that you never let on that the sovereign is unpopular.

There are more and more Republicans joining Trump's court these days, apparently operating on the assumption that their own parochial interests are best served by making him successful, or at least by manipulating him for their own ends. Sen. Lindsey Graham, R-S.C., is tying himself in knots trying to pretend that he hasn't become a fawning yes-man. in a naked attempt to manage the unmanageable, and that has not completely betrayed the independent truth-teller image he's tried to build over the last few decades. It's not working for him.

Meanwhile, McCarthy is actually helping Trump destroy the GOP's chances of holding on to its majority by forcing his own California delegation to vote the party line, in a state that is itching to unseat as many of its remaining Republicans as possible. In just the last few weeks, two longtime GOP congressmen from rapidly diversifying districts in the Southern California suburbs, Reps. Darrell Issa and Ed Royce, announced they would not run for re-election. Both districts are now viewed as likely Democratic pickups, and they're not alone.

Trump has a 22 percent approval rating in California, so you might think Golden State Republicans would be more vocal in their condemnation of Trump and the draconian policies he's proposing. So far they haven't been. Tara Golshan at Vox calls this "The McCarthy Factor," meaning that the fundraising powerhouse constantly assures his delegation that he's got their backs, no matter what. Issa and Royce lost their faith in McCarthy's ability to protect them from a big blue tsunami next fall. Of California's 53 House seats, only 14 are now held by Republicans, seven of those in districts that Hillary Clinton won in 2016.

McCarthy's seat may not be in danger, but his delegation -- like the entire Republican caucus -- could be a lot smaller next year. Unless his strategy of feeding pink Starbursts to a historically unpopular president turns out to be genius.