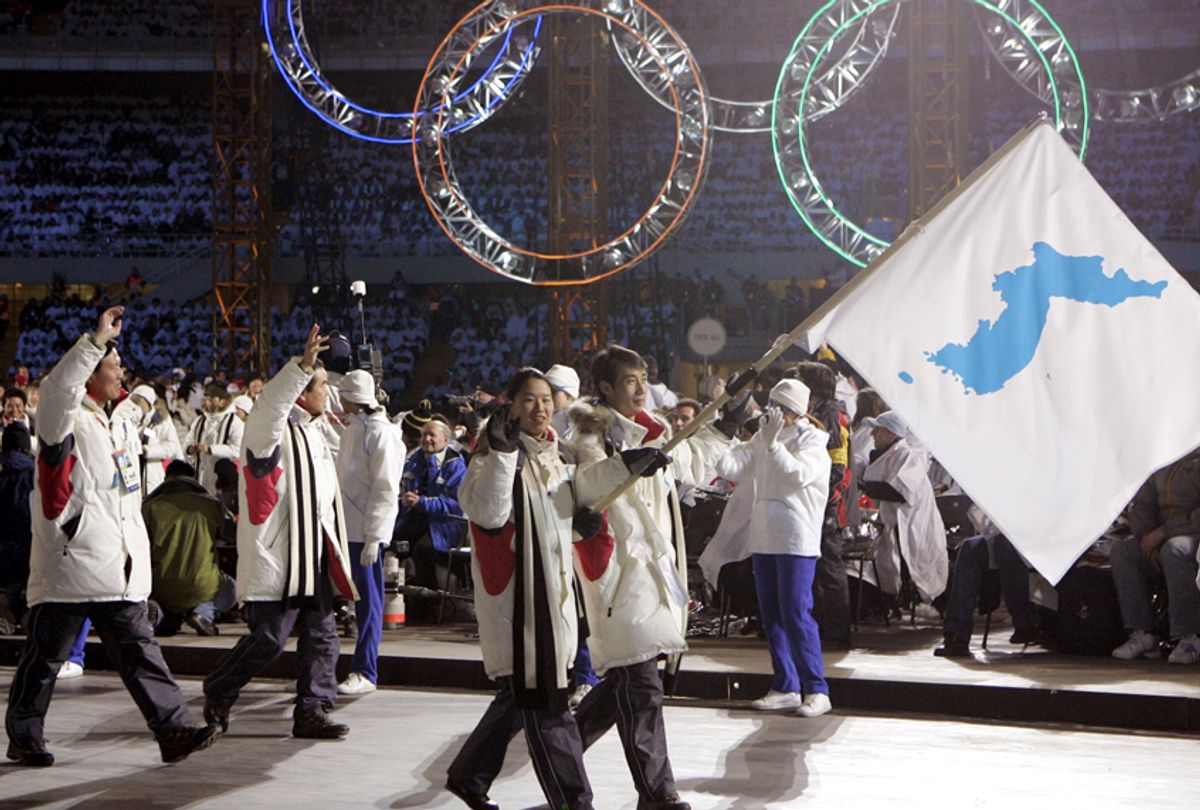 As rumored and hinted at, North and South Korea announced Wednesday that the two nations would indeed be marching under the same flag during the opening ceremony of the 2018 Winter Olympics on Feb. 17 in Pyeongchang, South Korea. While many observers anticipated the move, it is nonetheless remarkable given the shared history of the two states, increased tensions between the United States (South Korea's number-one military partner) and the North and the outstanding fact that a state of conflict still exists officially between the two Koreas.

As well, the nations have committed to fielding at least one combined team for the first time — women's ice hockey — and may be developing more joined efforts. Currently, the plan is for their skiing teams to train together. While both Koreas aim to have 550 North Korean athletes compete, only a single pairs figure skating team is confirmed to appear at the moment. As of now, it appears the states will use a flag depicting the Korean peninsula at the opening ceremony, which at least some of their athletes used in the 2004 and 20o6 games (they also marched together in the 2007 Asian Winter Games).

News of the agreement arrived via South Korea's Unification Ministry, which said that concentrated talks in the Demilitarized Zone resulted in the compact. The move still has to be approved by the International Olympic Committee, the organization which oversees the games.

As noted, the agreement can be seen as a diplomatic breakthrough. While an armistice between the two nations was signed at the end of the Korean War in 1953, technically a state of conflict still exists between them, one that has been marked by both efforts towards rapprochement and aggression. In 2013, for instance, the North removed itself from the armistice in response to increased United Nations sanctions. Three years later, it was requesting peace talks brokered by the United States.

The last few months have been a particularly curious time in the relationship between the North and the South. While North Korean leader Kim Jong-un continues to rattle his saber by threatening nuclear war, launching missile and warhead tests, and sparring with U.S. President Donald Trump over Twitter, he's also been conciliatory toward his rivals in the South, saying he wished for a "peaceful resolution of the Southern border" in his annual New Year address. In that same speech, he congratulated South Korea on its upcoming hosting of the Olympics.

Insofar as the U.S. is concerned, the situation with North Korea is almost as confused. Yes, through their leaders the two nations spar in words, each threatening to unleash nuclear weapons upon the other. Yet, through their diplomats, there seems to be at least a willingness to negotiate. Still, the tension between the two was marked by a false missile alert in Hawaii over the weekend.

Sport has periodically been a playing field where North and South Korea have achieved something like harmony. In international competition, North Koreans have often cheered for the South Korean soccer teams and vice versa — except, of course, when they play against each other.