Trump's "chain migration" obsession: The Nazis thought of it first

Far right's latest paranoid meme — immigrants will overrun us like insects! — has an extremely ugly history 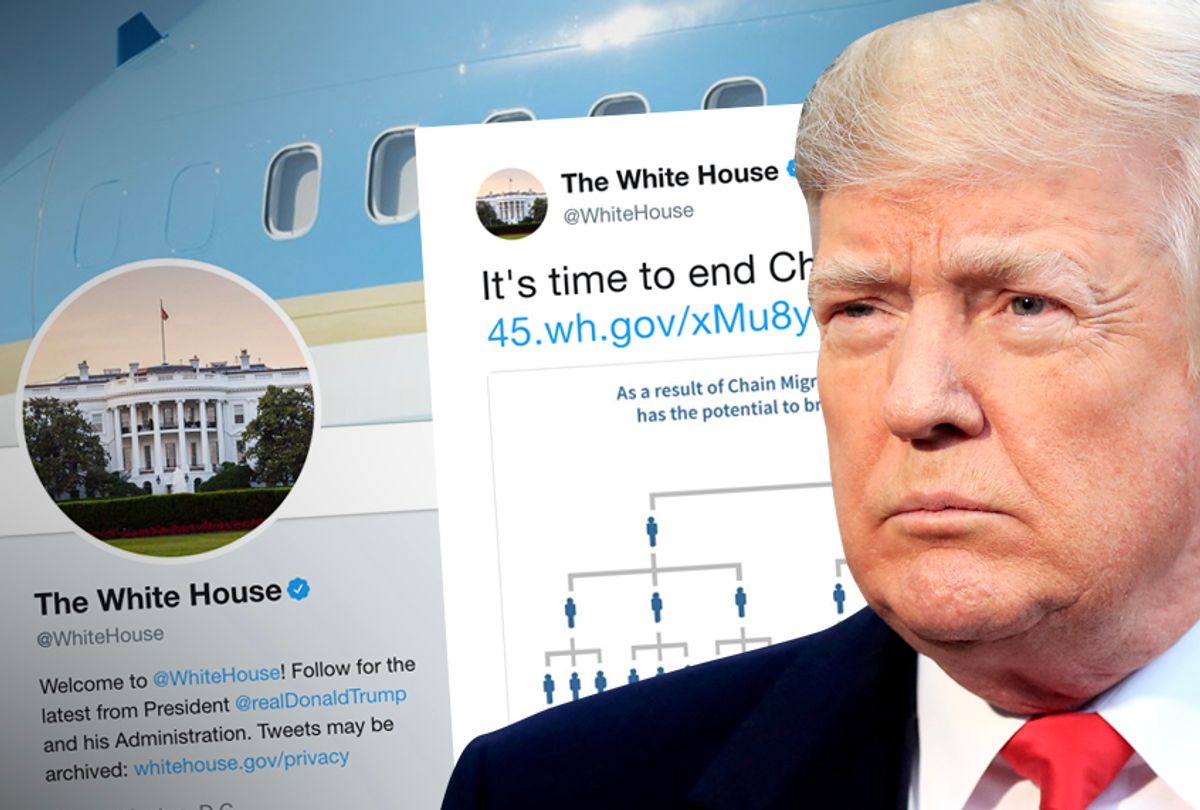 Donald Trump is a white supremacist. This fact has been repeatedly proven to be true by his words, deeds, thoughts, beliefs and actions. It is repetitious and tedious to chronicle what has been obvious for years, if not decades. Nevertheless, it remains essential to call attention to this fact. Too many Americans, especially those in the news media who should know better, yet feign shock at each new Trumpian low point slouched to by President Trump -- remain in denial about his profound racism.

As the entire world knows by now, during a meeting about immigration reform last Thursday, Trump reportedly described various nonwhite countries as "shitholes" and suggested that America needs more immigrants from predominantly white nations such as Norway. As controversy erupted in response to Trump's comments, one of his spokespeople told CNN that they will resonate among his base.

It is important to note that Trump's operative chose not to deny the substance or spirit of Trump's bigoted, hateful remarks. Indeed, that person spoke the truth about how such statements will be received by the president's racist supporters.

As I explained in an earlier article at Salon, Trump and the Republican Party are seeking to engage in a "soft" ethnic cleansing of nonwhites and Muslim immigrants. Such a policy is in keeping with how fascists target a group that can be considered the Other, as a way of building momentum for their movement and creating a feeling of "us versus them" cohesion among supporters.

Trump's hostility towards immigrants from Latin America (whom he has described as natural born rapists and murders), his suggestion of creating a national registration database of Muslims, his cancellation of the DACA program, his recent remarks that Haitians all have AIDS and Nigerians live in "huts," and his implication that the people of Puerto Rico were lazy because they needed help after the devastation of Hurricane Maria, all fit this pattern.

Several weeks ago, in the midst of the toxic wave of coordinated chaos that spews forth on a daily basis from Trump and his party, an important detail went little-noticed by the mainstream news media and chattering class.

Trump and his right-wing allies have avidly worked to mainstream a new talking point about "chain migration." The idea is that immigrants from nonwhite and Muslim countries ultimately bring large extended family groups with them, who come to America as social parasites.

A statement released by the White House in December explained it this way:

Most green cards in the United States are awarded based on an antiquated system of family ties, not skill or merit. This system of Chain Migration – whereby one immigrant can bring in their entire extended families, who can bring in their families and so on – de-skills the labor force, puts downward pressure on wages, and increases the deficit. Chain Migration also undermines national security, by failing to establish merit-based criteria for evaluating entrants into the United States – instead, familial relations are all that is required to obtain a green card and, in turn, become a voting U.S. Citizen within a short period of time, with access to Federal welfare and government benefits.

Of course this is a gross distortion of how America's immigration laws actually work in practice: It takes many years for someone to sponsor relatives, even from his or her immediate family. Serious economists and other researchers have also concluded that immigrants are a net positive gain for the American economy.

Even more troubling, given Donald Trump's white supremacist views, is the diagram used by the White House to signal the perils of "chain migration" and the way "undesirable" immigrant can supposedly bring many more of them to America.

For comparison, here is one of the original "race science" diagrams used in Nazi Germany to explain the Nuremberg Laws: 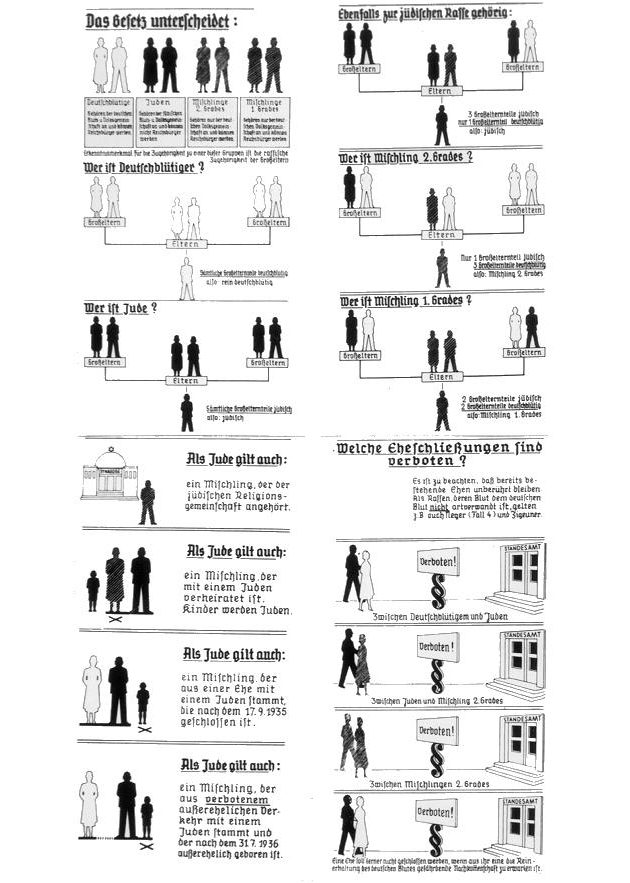 Here is a Nazi-era cartoon depicting the paranoid fear that Jews and other "undesirables" would soon outbreed the so-called Aryans: 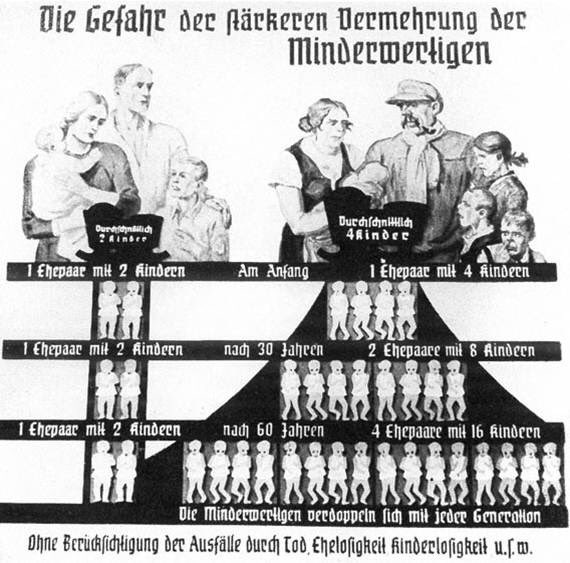 In essence, according to Trump administration logic, one "undesirable" person from a "shithole" country can pollute the entirety of (white) American society. Such a claim is almost identical to the racial logic used by the Nazis against Jews and other "degenerates" who were not suitable for white "Aryan" society.

As the Forward has observed, the right wing's sudden obsession with "chain migration" has sinister origins:

In very clear language, as well as in visual representation, the White House is saying that for every immigrant you see, that’s several more you don’t see. This is the way an exterminator talks about cockroach infestation. Combine this dehumanization of immigrant families with the flimsy notion that immigrants steal jobs from natural-born American citizens, and the eerily Nazi themes are clearly felt.

These concerns about Trump and his administration speak to a larger pattern. Whether or not he is consciously aware of these associations, Trump is an old-school "blood and soil" racist who believes that some racial groups have "superior genes" compared to others -- of course Trump counts himself among the superior breeding stock. He has gone so far as to suggest that a Mexican-American judge could not preside over a case because the latter's ethnic background made him inherently biased. At times, Trump, and the American far right more generally, has used violent, "eliminationist" rhetoric, as in describing nonwhite immigrants or Muslims as "snakes."

Donald Trump's political imagination is not complicated. He is a petit-fascist and racial authoritarian. He is a white supremacist. His policies and those of his principal allies reflect those attitudes and beliefs. Trump's presidency is simply an instrument for trying to make those Whiteopian dreams come true as a living nightmare for everyone else.