"I loved my father," Farrow said. "He was my hero. And that doesn't obviously take away from what he did" 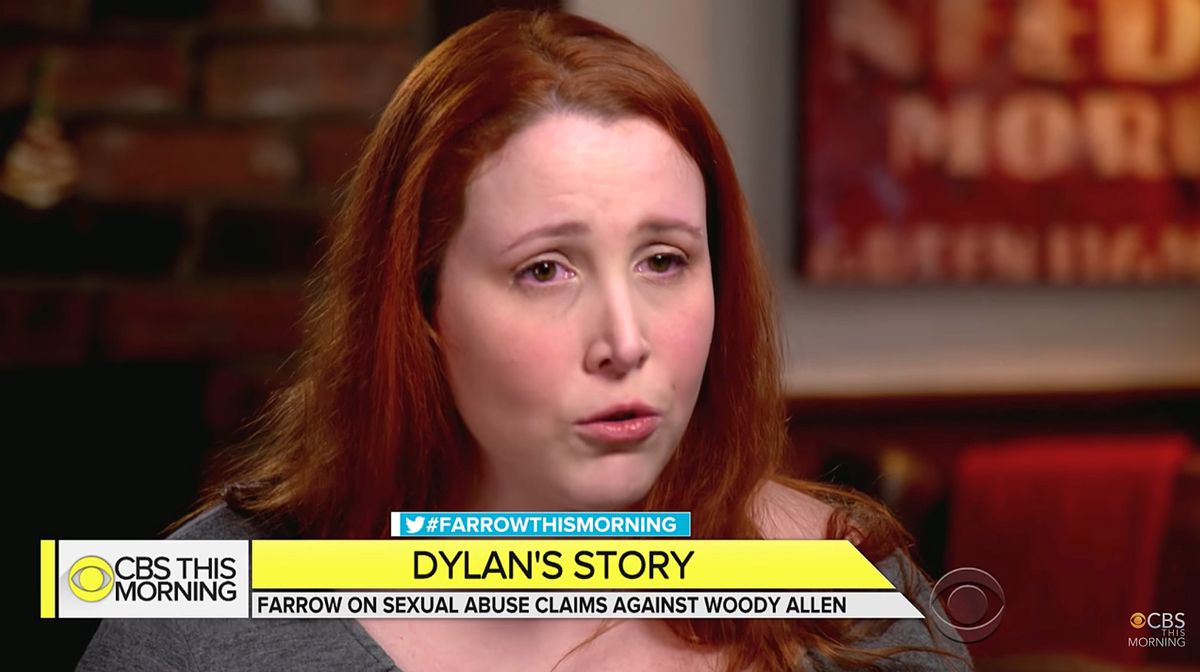 "I loved my father," Farrow told King. "I respected him. He was my hero. And that doesn't obviously take away from what he did. But it does make the betrayal and the hurt that much more intense."

Farrow then went into disturbing detail about an incident that she says took place on August 4, 1992, while her mother, Mia Farrow was out shopping. "I was taken to a small attic crawl space in my mother’s country house in Connecticut by my father," she told King. "He instructed me to lay down on my stomach and play with my brother's toy train that was set up. And he sat behind me in the doorway, and as I played with the toy train, I was sexually assaulted. As a seven-year-old, I would say he touched my private parts, which I did say."

She added, "As a 32 year old, he touched my labia and my vulva with his finger." Farrow said she told her mother, who was very upset by her claims. "My first impulse was that I had done something wrong," she told King. The story does not vary from the account she has offered the public in the 25 years since it allegedly happened. The crucial difference Thursday morning is only that she was telling it in person and on camera via a major network, her pained face and voice unavoidable and compelling.

King brought up the accusation that Mia Farrow had brainwashed Dylan and wanted revenge. Months before, Mia had discovered nude photos of Soon-Yi (Mia's adopted daughter from a previous marriage), in Allen's apartment. He admitted to having an affair with her and the two are still married.

"You could see why he might make that claim," King said to Farrow. "He would say that she was filled with rage after his affair with Soon-Yi had been discovered, and that she was out for revenge and full of rage."

"And what I don't understand is, how is this crazy story of me being brainwashed and coached more believable than what I'm saying about being sexually assaulted by my father?" Farrow replied. "Except every step of the way, my mother has only encouraged me to tell the truth. She's never coached me."

King played a clip from an interview with Allen on "60 Minutes," where he called Farrow's allegations "so insane."

Farrow's body trembled and tears welled as she watched. "He's lying and he's been lying for so long," Farrow told King. "And it is difficult for me to see him and to hear his voice. I'm sorry," she said, wiping tears from her eyes.

Farrow added that the alleged incident in the attic wasn't isolated. She said that Allen was "always touching me, cuddling me and if I ever said, you know, like I want to go off by myself, he wouldn't let me. . . He often asked me to get into bed with him when he had only his underwear on and sometimes when only I had my underwear on."

Allen was investigated but never charged with a crime. Frank Maco, the Connecticut state prosecutor on the case, told CBS that "there was probable cause to charge Allen," but he was concerned with Farrow's mental state.

In a statement to CBS, Allen said, "When this claim was first made more than 25 years ago, it was thoroughly investigated by both the Child Sexual Abuse Clinic of the Yale-New Haven Hospital and New York State Child Welfare. They both did so for many months and independently concluded that no molestation had ever taken place. Instead, they found it likely a vulnerable child had been coached to tell the story by her angry mother during a contentious breakup."

He continued, "But even though the Farrow family is cynically using the opportunity afforded by the Time's Up movement to repeat this discredited allegation, that doesn't make it any more true today than it was in the past. I never molested my daughter – as all investigations concluded a quarter of a century ago."

As stated, the claims Farrow told CBS "This Morning" are in no way new. In fact, Farrow has been telling the exact same story for over two decades. But in light of the rise of the #MeToo movement, and the newfound space for stories of sexual misconduct to be listened to and believed it offers, this retelling lands with added impact.

But perhaps even more importantly, it's easy to believe that, with Farrow recounting her allegations on camera, unwavering but visibly traumatized, this new visual may have a new effect on Allen. Whether Farrow's allegations are true or not, this interview is disturbing and compelling enough that it could be the death knell for his long, illustrious time in the industry. Already, actors are coming forward to denounce the director in droves, and conversation around Allen is changing, fast. Thursday, by all appearances, could mark the true beginning of the end of his life behind the camera.

Watch the full interview in the videos below.