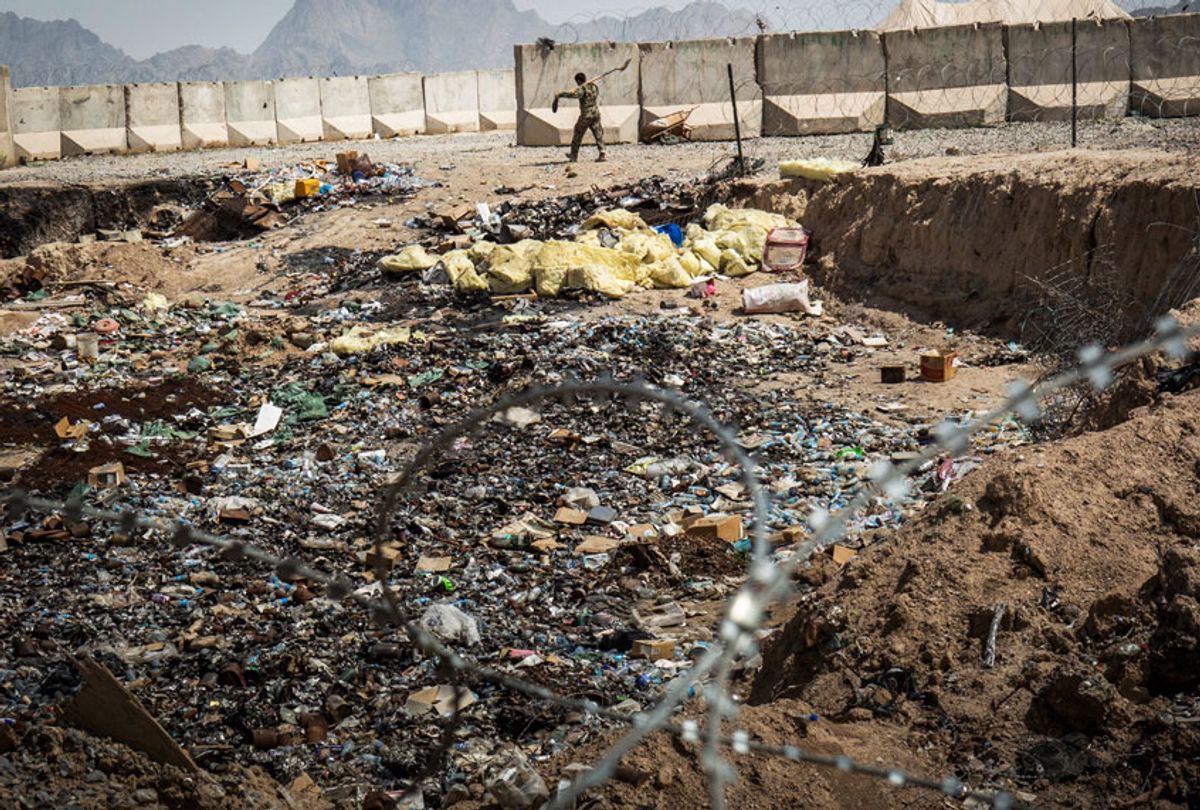 Excerpted with permission from "The Burn Pits" by Joseph Hickman. Copyright 2016 Hot Books, an imprint of Skyhorse Publishing, Inc. Available for purchase on Amazon, Barnes & Noble, and Indiebound.

Last week former Vice President Joe Biden reignited national interest and concern surrounding the use of burn pits, a common way to get rid of waste at military sites in Iraq and Afghanistan. In a recent PBS Newshour interview, Biden concedes for the first time the link between these burn pits and the brain cancer that killed his son, Beau Biden. The former Vice President said, “You take everything from the fuel oil, the plastic furniture, to all the waste and we just burn them . . . and a lot of work is being done [to prove the link between burn pits and increased incidence of cancer].”

The following excerpt from Joseph Hickman’s "The Burn Pits" (Hot Books, 2016) chronicles Beau Biden’s military service in Iraq (among several other servicemen and women), tracking Beau’s health from deployment through his return to civilian life in 2009, and explores this connection further between these burn pits and the cancer that ultimately took his life.

Veterans of the wars in Afghanistan and Iraq have an odd way of describing the burn pits. They often speak about the smoky pits as if they were another elusive enemy they were facing in those countries. They also feel they were continually lied to by their command about the dangers of the burn pits. Many say that the only time they got relief from the siege of smoke and ash was when high-ranking generals or politicians would come visit their bases. While those VIP visits were in progress, the base commanders would temporarily stop the inferno in the pits.

After interviewing many current service members and veterans from all across the country, I realized the burn pits in Afghanistan and Iraq did not discriminate. A lot of people got sick from them: civilian and military personnel, enlisted and officers, black and white, male and female. It didn’t matter who you were—everyone who breathed the poison air was vulnerable. In fact, evidence indicates that among the burn pit victims might have been major Joseph R. “Beau” Biden, the eldest son of the vice president of the United States, Joe Biden.

In addition to his career in politics, Beau Biden served as a major in the Army National Guard Judge Advocate General (JAG) Corps. In October 2008, nearly two years after he was elected Delaware’s attorney general, Biden’s National Guard unit was activated for deployment to Iraq. Prior to his deployment, Major Biden was found by the Army to be healthy and fit, easily passing the Army Physical Fitness Test, which required him to do a minimum of 34 pushups, 38 sit-ups, and a two-mile run in 18 minutes, 18 seconds. He was also given an extensive physical exam just a few weeks before he deployed to Iraq at Fort Bliss, Texas, and he was found to be in good health.

In December 2008, Major Biden shipped out to Iraq with the rest of his unit. While in Iraq, he was stationed mostly at Camp Victory, which was located just outside of the new Baghdad International Airport. He also spent several weeks at Joint Base Balad, forty miles north of Baghdad. During his tour of duty, he was highly respected by both his peers and the enlisted soldiers serving with him. As the son of a prominent political figure, Beau Biden was a rarity in today’s U.S. armed forces. Only about a fifth of Congress has any military experience, and only about 1 percent of all senators and House members have children in uniform. Major Biden’s peers knew that he was, in the words of the old Creedence Clearwater song, a “Fortunate Son.” He easily could have avoided going to war, but he didn’t. Instead Biden chose to serve his country, right there in the unbearable heat of the Iraqi desert alongside soldiers who, in nearly all cases, had far fewer options than the vice president’s son. As Major Biden walked through the base camps, younger soldiers would often go out of their way to salute him, shake his hand, and thank him for serving with them. During his Iraq tour, Major Biden performed his duties as a JAG officer at a high standard and set an example for his peers. For his exemplary performance, he was awarded the Bronze Star for meritorious service in a combat zone.

In September 2009, Major Biden returned home from his tour of duty to his home in Wilmington, Delaware, reuniting with his family and returning to his civilian job as attorney general for the state of Delaware. But Biden’s life soon took a tragic turn. One day in May 2010, eight months after returning from Iraq, Beau woke up with a headache, numbness in his limbs, and paralysis on one side of his body. He was rushed to Christiana Hospital in Newark, Delaware, where doctors determined that the physically fit, 41-year old Biden had suffered a mild stroke. After being transferred to Thomas Jefferson Memorial Hospital in Philadelphia, Pennsylvania, for a few more days of observation, Biden was released. But his health soon began deteriorating.

Biden started feeling increasingly fatigued and weak, and he sometimes experienced episodes of disorientation. Finally, in August 2013, Beau was diagnosed with brain cancer and was admitted to the University of Texas MD Anderson Cancer Center in Houston. There, he had a lesion removed from his brain and received radiation and chemotherapy treatments. Following these treatments, Biden’s cancer went into remission and he and his family were filled with a new sense of hope. Less than two years later, however, the cancer returned and Beau was again hospitalized, this time at Walter Reed National Military Medical Center in Bethesda, Maryland. This time, his doctors concluded there was not much they could do to help him except keep him comfortable. Ten days later, on May 30, 2015, Beau Biden died at age 46. A grief-stricken Vice President Biden released a brief family statement on his passing: “Quite simply, Beau Biden was the finest man any of us have ever known.”

Unfortunately, there are many other tragic stories like Beau Biden’s among the ranks of those who served with him. During Major Biden’s months of deployment at Camp Victory and Joint Base Balad, both bases had multiple burn pits that operated round-the-clock, with no environmental restrictions. Many of Biden’s fellow service members at these bases returned home with serious health problems. Army Warrant Officer Daniel Tijerina, who served at Camp Victory, later recalled the horrific burn pits there:

I lived and worked under a mile away from where KBR and Halliburton operated open-air burn pits sites which produced toxic smoke, ash, and fumes generated through the disposal of waste in open-air burn pits. The toxic smoke and smell would routinely hover over the Camp Victory complex during the late-night and early-morning hours, because temperature inversions kept the plume on the surface or just above. I believe that I also ingested various amounts of toxins through food sources because of smoke plume dispersion through Camp Victory facilities. Camp Victory and [the] nearby cluster of military camps did not have clean-burning incinerators, or other [safe] methods for disposal of all waste at these open burn pits in place. KBR and Halliburton burned vast quantities of unsorted waste in enormous open-air burn pits with no safety controls. The open-air burn pits . . . created a vast amount of smoke and smell . . . [that] blew over and inside Camp Victory facilities, such as work stations, several dining facilities, medical facilities, personal hygiene facilities, and living areas. Jet fuel was used to start the burn pit fires. Waste that was burned by KBR and Halliburton contractors included animal carcasses, asbestos insulation, biohazard materials, cleaning supplies, dangerous chemicals, hydraulic fluids, items containing pesticides, incomplete combustion by-products, human waste, a variety of chemicals, lacquers, lithium batteries, medical supplies (including those used during smallpox inoculations), medical and hazardous electronic waste, metals, human corpses, munitions boxes, paints and paint strippers, paper/cardboard, petroleum-oil lubricating products, rubbers, office equipment such as copiers, printers, monitors, glues, and adhesives, plastic water bottles, polyvinyl chloride pipes, rubber, solvents, Styrofoam, tires, trucks, and wood.

As hard as it may be to imagine, the burn pits at Balad—the other base where Major Biden was stationed—were widely considered to be even worse than those at Camp Victory.

Just like Beau Biden, many service members stationed at those two bases during that time frame were in perfect health prior to being sent to Iraq. After their deployment, they became seriously ill. Just from my own research, I contacted 112 service members and contractors who were stationed at Camp Victory and Joint Base Balad. Some were stationed at these bases at the same time that Major Biden was there. They all became very ill from what they believe was their exposure to the burn pits.

Shockingly, of those 112 service members, 31 suffer from different forms of cancers and brain tumors. Among those deployed at Camp Victory and Balad who later suffered problems similar to Beau Biden are:

Sadly, the list goes on. One thing these brave service members have in common is that they were all stationed at Camp Victory, Joint Base Balad, or both. Now they are sick, dying, or already dead from illnesses that they all believe were caused by their prolonged exposure to the burn pits on those bases.

These service members’ suspicions are supported by research conducted in 2014 by Dr. Anthony Szema, at Stony Brook University School of Medicine on Long Island, New York. Dr. Szema’s research team conducted lung biopsies on several service members who were stationed at Camp Victory, and very high levels of titanium were found in all of the veterans’ lungs. Dr. Szema strongly believes the titanium dust particles found in the soldiers came directly from the burn pits.

Titanium can easily spread to the brain through inhalation, and high concentrations of titanium can cause brain damage. Titanium has also been labeled by the National Institutes of Health as a possible carcinogen. Another medical survey conducted by Dr. Anthony Szema found that service members who were deployed to Afghanistan and Iraq have a much higher rate of cancer and leukemia than soldiers who never served in those countries. The rate of having a child with birth defects is also three times higher for service members who served in those countries than those who did not.

American soldiers are not the only burn pit victims. The burn pits were also a health disaster for the people of Iraq and Afghanistan who lived in the vicinity of these toxic infernos.