“This is a woman whose name is synonymous with outrage,” says the often outrageous morning-show host 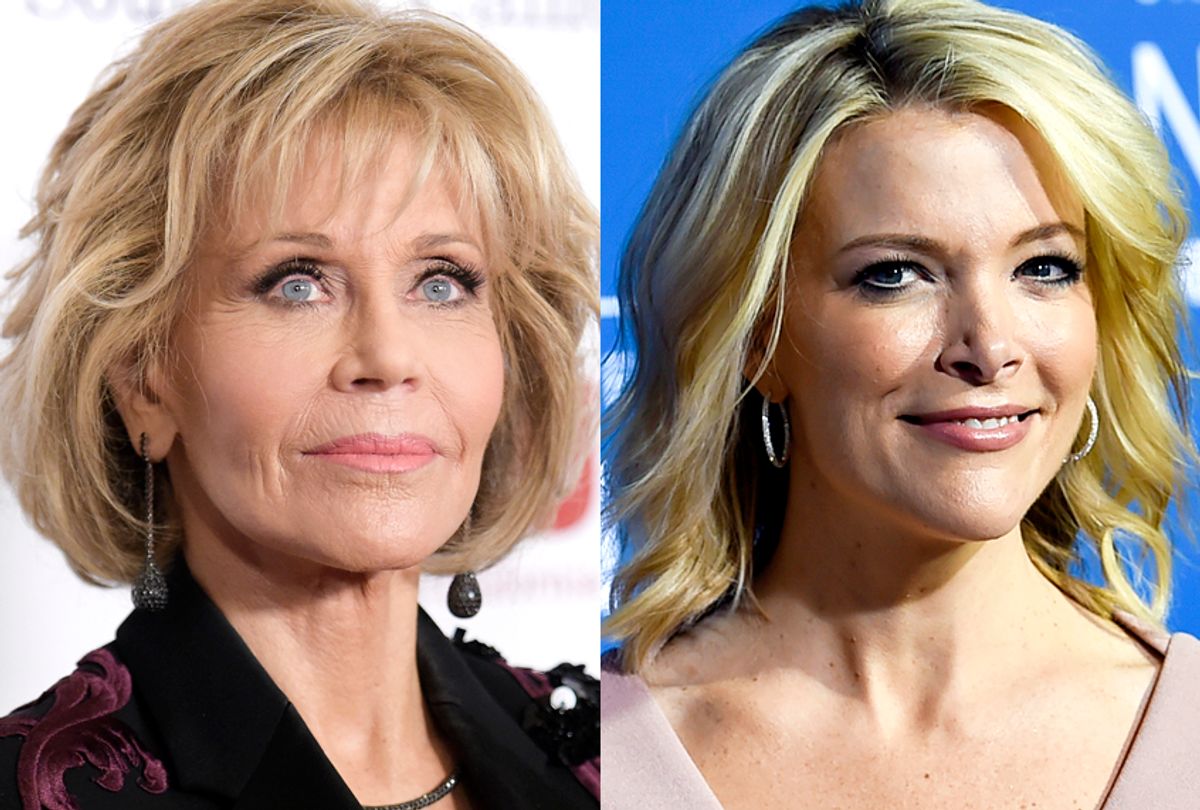 In a rare display of major-network pettiness, Megyn Kelly used a few precious moments on Monday's edition of the "Today" show to blast actor and activist Jane Fonda for her actions during the Vietnam War, a conflict that ended almost 42 years ago.

Looking directly into the camera, the former Fox News star said, "I am not in the market for a lesson from Jane Fonda on what is and isn't appropriate." The show then displayed the famous image of Fonda sitting in the gunner's seat on an anti-aircraft gun during her controversial 1972 visit to Hanoi, North Vietnam.

Kelly continued, "After all, this is a woman whose name is synonymous with outrage. Look at her treatment of our military during the Vietnam War. Many of our veterans still call her 'Hanoi Jane.'" Kelly detailed Fonda's various and questionable statements and actions during the Vietnam War, specifically the ones criticizing members of the U.S. military and American POWs.

While Fonda has apologized for those statements repeatedly, Kelly suggested she had only expressed regret over the photo of herself on the anti-aircraft gun — a selective reading of history.

Kelly continued, "By the way, she still says she's not proud of America," adding that, "So the moral indignation is a little much. Honesty, she has no business lecturing anyone on what qualifies as offensive."

So what was Kelly doing, dredging up a 45-year-old part of Fonda's past, one she has said she regrets? What was Kelly doing eliciting applause from her audience with callouts to our troops seemingly pulled straight from a Donald Trump tweet and used against a woman now more known for her workout videos than her anti-war activism.

Megyn Kelly was getting revenge because Jane Fonda laughed at her, that's what.

Since Kelly asked Fonda about the actor's history of plastic surgery in a fairly impolite way in late September, the actor has been giving it to the morning-show host in small blasts of pithiness. It's been, yes, a little petty, but mostly appropriate and, honestly, fun. Fonda has been open about her surgery in the past, though on her own terms. Kelly mishandled the moment, opening herself up to fair criticism at a time where her general skills as a host were in question.

Recently, the whole mess wound up back on "Today" when Fonda and "Grace and Frankie" co-star Lily Tomlin joked about the matter with the show's late-hour hosts Hoda Kotb and Savannah Guthrie. A good laugh was had, mostly at Kelly's expense.

And so, we have Kelly standing up for not only our troops and, one guesses, the Nixon administration, but older women, in response.

"When she first complained, I chose to say nothing, as my general philosophy is whatever other people think of me is none of my business," Kelly told her audience Monday about Fonda's various criticisms. She instantly proved that wrong by saying, "However, Fonda was at it again last week . . . so it’s time to address the 'poor me' routine."

From there, Kelly spun a yarn about how Fonda had an obligation to answer her questions about plastic surgery because she herself speaks about aging in public. "If Fonda wants to have a discussion about older women's cultural face," Kelly said, "then her plastic surgery is tough to ignore. Fonda knows this — she knows this — which is why, to her credit, she has discussed her plastic surgery almost everywhere, before coming on our show."

"Apparently when she came here, however, again to promote her film about aging, I was supposed to discern that this subject was suddenly off-limits," Kelly added. "Look, I gave her the chance to empower other women, young and old, on a subject which she purports to know well, and she rejected it."

This is all fairly rich stuff from a woman who recently praised the positive slimming effects of fat-shaming on live television, and the source of Kelly's anger is well revealed by her critiques: She's just as angry that she's become the butt of a joke that she was that Fonda chose to talk about her surgery with others and not with her.

Basically, Kelly turned NBC's flagship morning show into a platform for her entirely personal agenda — her hurt feelings, her inability to let something go. You know, for a woman who constantly sells herself as strong, empathetic, caring and clear in her values, Kelly always manages to find a way to come off as fragile, self-focused and shifty as they come.