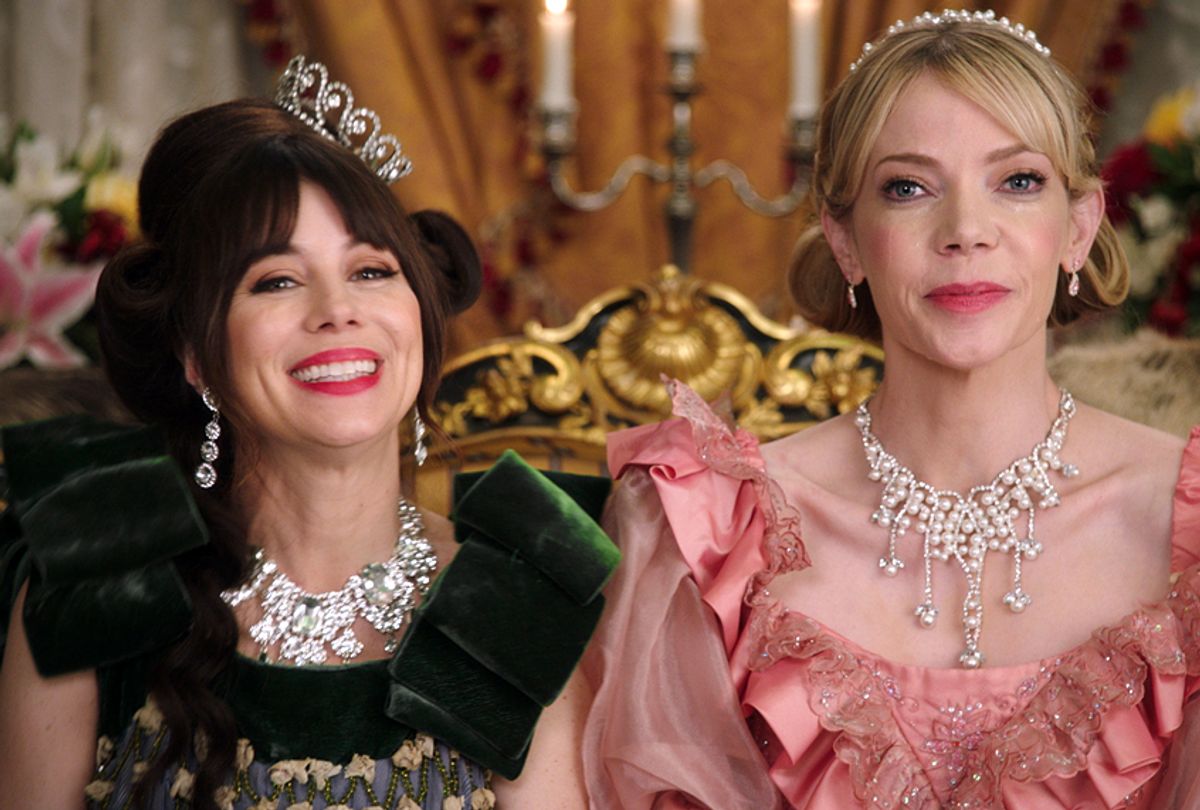 Natasha Leggero and Riki Lindhome in "Another Period" (Comedy Central)
--

“God, I f—cking hate women!” says a character on Comedy Central’s “Another Period” — a suffragette, no less, who throws up her hands with complete dismay as she does so. Knowing that the cause of her distress is none other than the fabulously selfish Bellacourt sisters Lillian and Beatrice (Natasha Leggero and Riki Lindhome) makes her distress understandable. You see, Lillian and Beatrice are the absolute worst, because they stand as proof of the patriarchy's resilience. No matter how difficult men make it for women to attain power, few adversaries on that front can be more bitter and resistant to winning equality than other women.

For two full seasons Leggero and Lindhome have done a fantastic job of persuading us that Liliian and Beatrice are the enemy, a toxic combination of idiotic and powerful. They have all the money in the world, can do anything they please and have no need for irritants such as political franchise and self-determination. Everything they desire is handed to them on silver platters by servants with names like Peepers (Michael Ian Black). Who needs equality and rights? Only — ugh — poor people.

Season 3 of “Another Period” kicks off Tuesday at 10:30 p.m., and this season’s tagline feels more pertinent than any other in the series history: “same sh*t, ‘Another Period.’” America, circa 1902, seems a lot like America in 2018, doesn’t it? Scholars have taken to likening our time to the Gilded Age, the era when the fictional Bellacourts were on top. Back then a small percentage of people controlled most of the country’s wealth and had a terrifying amount of influence over the nation’s political structure. And now? Re-read the sentence that starts with “back then.”

“So much of what we talk about in the Gilded Age is true now,” Leggero said in a recent phone interview. “Income tax, for example. The reason there was a Gilded Age was that the rich people figured out how not to pay taxes.”

“Another Period” doesn’t bang on any specific political topic, but roots around for what black comedy can be mined from the growing chasm between the rich and the working class. The Bellacourt household operates with a ludicrous upstairs/downstairs dynamic, where some servants take joy in their own abasement while others chafe at their lack of opportunity. The family has trouble seeing them as fully human.

Other parallels between the series’ version of then and modern times are just as abundant.

Now: We stand at a time when feminism is fashionable (again) but the tip of its spear remains blunted by a lack of cohesion and inclusivity. We live in a political climate delivered to us by white women content to vote against their own self-interests for a number of reasons, including the fact they trusted a sexist, racist, vulgar reality TV star and failed businessman to run the country more than a qualified woman.

The fictional then: The nascent feminist movement personified by The Newport Association of Gal Spinsters (N.A.G.S.), struggles to find a way to deliver their voting rights message before Congress. The only way they can get the message through is by placing their hopes in Lillian and Beatrice, who steal the activists’ thunder by throwing a signature drive as part of a scandalous carriage washing event, done in full bathing frocks that cover the ladies from chin to toe.

“In a way, some of these things never really change, and there are some things we can parody in any time, such as women who want power and women struggling for women’s rights,” Lindhome observed.

Other similarities could not have been foreseen, such as Lillian and Beatrice Bellacourt’s resemblance to the likes of Melania Trump and Louise Linton, the wife of US Treasury Secretary Stephen Mnuchin. (Remember when she bragged about using a government plane to take a day trip to Kentucky, crowing she has the right to do so because her affluent husband pays way more taxes than the hoi polloi?)

Perhaps a better comparison would be to liken the Bellacourts to Ivanka and Tiffany Trump, though Tiffany’s double in “Another Period” is probably Hortense, the least appreciated Bellacourt sister.

When Leggero and Lindhome co-created “Another Period,” which first debuted in 2015, they didn’t foresee that the electorate would wholeheartedly embrace plutocracy and bigotry. What they did notice was the audience’s affection for “Keeping Up with the Kardashians” and “Downton Abbey,” and how the production values of the former could be merged with the narrative style and elaborate period trappings of the latter.

Cultural theorists could have studied the popularity of those series and viewed them as harbingers of a political and social sea change. Leggero and Lindhome saw their rise as an opportunity to mine comedy from the absurd proclivities of people in past eras who had too much money and time on their hands, and not enough entertainment.

The third season picks up with Lillian and Beatrice contending with a power shift in the Bellacourt household, as their mother Dodo (Paget Brewster) shifts the family fortune into her possession following the efforts of her ex-husband to toss her aside to marry his scheming mistress, Celine, aka Chair (Christina Hendricks).

Left up in the air is Lillian and Beatrice’s status as the heretofore anonymous heroes of a young feminist struggle intertwining voting rights with the temperance movement. This is completely accidental, mind you, born out of Beatrice’s efforts to halt Lillian’s wild bender by smashing the liquor bottles of every pub she could find, a la Carrie A. Nation.

Activists of their day see this as a brave social act. Harriet Tubman, written here as a branding expert, declares them to be the new faces of feminism. But Lillian and Beatrice have no use for politics; they only get out of bed for a shot at fame. And if they can ride the first wave of feminism to celebrity . . . sure, why not?

Leggero and Lindhome began writing the current season prior to the November 2016 presidential election, weeks after the second season ended. They originally envisioned the third season as a satirical echo of the election of the first female president of the United States; amazingly the seasoned comedians did not see a punchline coming. But it landed with a thud, forcing the show’s writers to reframe the third season.

A lot of television writers rooms were in a similar situation that November, particularly late night writers, whose production schedules and output were effectively transformed by a sharp transition into the post-reason world. In that respect, Lindhome viewed their show’s period piece-status as “more of a blessing because we get to speak to it [the current social climate] in ways no one else does, and we can get away with a lot more.”

Leggero seconded that, citing her experience in stand-up as evidence. Like Lilllian and Beatrice, Leggero’s signature is wearing fancy dresses piled with accessories, which allows her to delve into darker comedic spaces. “Because if I’m wearing a fancy dress,” she theorized, “maybe I’m in character. It is amazing what we can get away with.”

Subplots in season three continue to speak to the hollowness of celebrity support in political movements while taking on misogynistic trolling, immigration and police brutality. Along the way the writers also manage to squeeze in a visit from Adolf Hitler.

“Another Period” manages to hit on all these topics by embracing terrible acting and outlandish twists while rooting them in uglier truths about rich white people. However, the comedy doesn’t specifically pit the Bellacourts against minorities. Instead, “Another Period” ensure that everyone in its sights is somewhat backward in their thinking, and some version of awful. It’s just that the extremely wealthy Bellacourts also happen to be extremely awful. So this season’s undesirable Americans are Italians, which is both period appropriate and makes a point about what a difference a century’s worth of assimilation can make in terms of determining what kind of people are acceptable.

Leggero and Lindhome finished shooting the current season in March 2017, long before the explosion of #MeToo, a movement the pair says they wish they’d been able to filter into the script. Regardless of this, “Another Period” cannot help but speak to the obstacles and pushback women are facing today by showing how similar they were to the woman’s struggles in 1902. The Bellacourts have their Trumpian son in Frederick (Jason Ritter), still enjoying an incestuous relationship with his twin sister.

Lillian and Beatrice also are unabashedly proud to be women working against bettering the status of other women, if only to maintain the exclusivity of access and special treatment that having money affords them. If parroting the tenets of the suffragette platform will make them famous and increase their stature among men in power, then so be it.

Eventually, as least in terms of winning the vote,  history tells us the joke will be on them. “Maybe finally Lillian and Beatrice will find a way to win women their equal rights. You never know,” Leggero says.

But, I pointed out to her, wouldn’t that essentially mean the end of the show?