Evangelical leaders give Trump a "mulligan" on Stormy Daniels 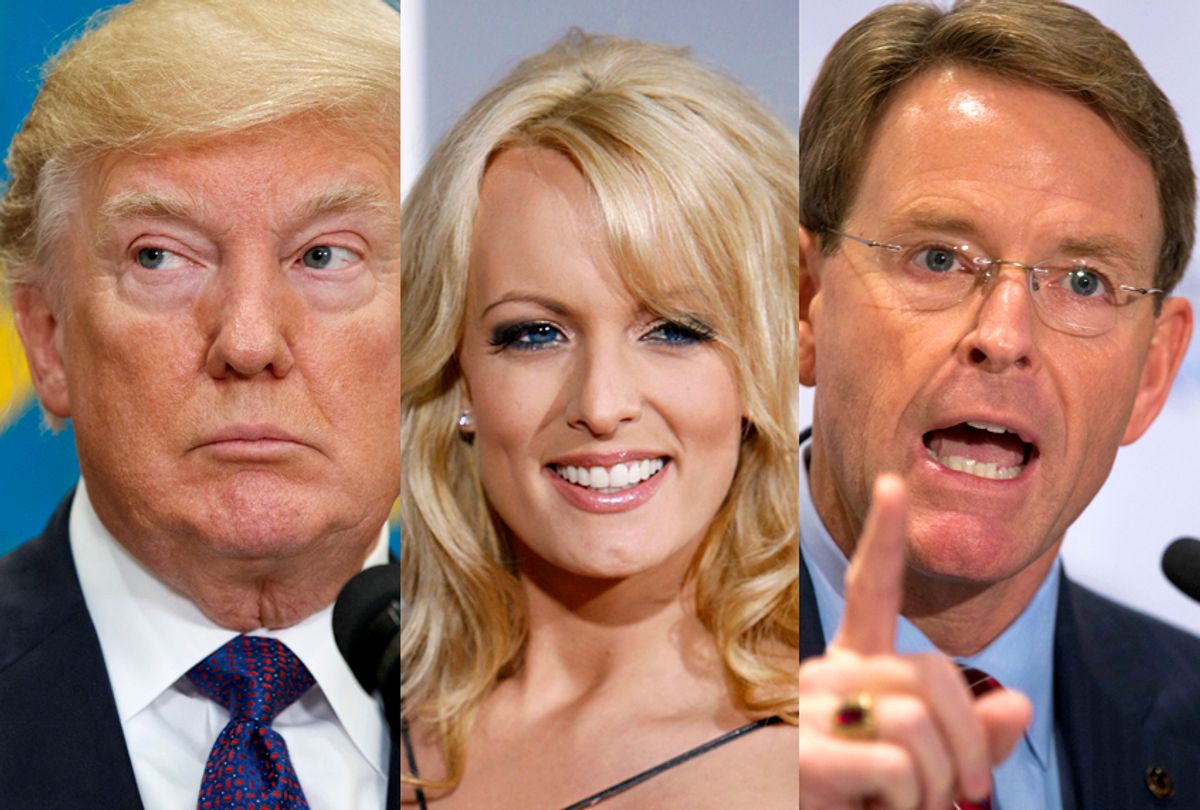 Evangelicals, despite their ultraconservative religious beliefs, don't care much about Trump's so-called sins or his inflammatory words because they "were tired of being kicked around by Barack Obama and his leftists," Perkins said. He added, "And I think they are finally glad that there’s somebody on the playground that is willing to punch the bully."

But the relationship between evangelical leaders and Trump, despite obvious instances that make them look to be the antithesis of one another, is more rooted in favors and policy, than any sort of legitimate moral high ground.

"I don’t think this president is using evangelicals. … I think he genuinely enjoys the relationship that had developed. He has found, I think—and he’s a very transactional president," Perkins explained. "Trust is important to him. Loyalty is important to him, and I think in this transaction, he realizes, ‘Hey, these are people I can count on, because they don’t blow with the political winds."

He added, "It’s a developing relationship, but I’ll have to say this: From a policy standpoint, he has delivered more than any other president in my lifetime."

Other evangelical leaders, such as Rev. Franklin Graham, the CEO of the Billy Graham Evangelistic Association, have chosen not to believe Trump engaged in an affair while married to his third wife seemingly only because the president never admitted to it.

"President Trump I don’t think has admitted to having an affair with this person," Graham said on MSNBC recently. "And so this is just a news story, and I don’t even know if it’s accurate."

Graham went on to say that evangelical Christians "certainly don't hold him up as the pastor of this nation and he is not." He added, "But I appreciate the fact that the president does have a concern for Christian values, he does have a concern to protect Christians whether it's here at home or around the world and I appreciate the fact that he protects religious liberty and freedom."

Ironically enough, Graham also expressed that the United States has a "sin problem."

"Our country's got a sin problem, and I believe if these politicians in Washington would recognize the moral failure of so many of their policies that maybe we could fix it," Graham explained. He conceded only that Trump is "not President Perfect."

Graham said that he has "no clue" if Trump engaged in an extramarital affair with Daniels and said, "I believe at 70 years of age the president is a much different person today than he was four years ago, five years ago, 10 years ago."

Support amongst some evangelicals has taken a hit in recent months, surprisingly. A Pew Research poll in December showed white evangelical Protestants support dropped from 78 percent last February to 61 percent now. But there's still little indication the tides are turning against Trump's favor, and Perkins noted that as long as the president delivers on policy, not much else may matter.

"Whenever the policy stops, and his administration reverts to just personality," Perkins said, "that’s where I believe the president will be in trouble."