As Mueller closes in, paranoia spreads in the White House 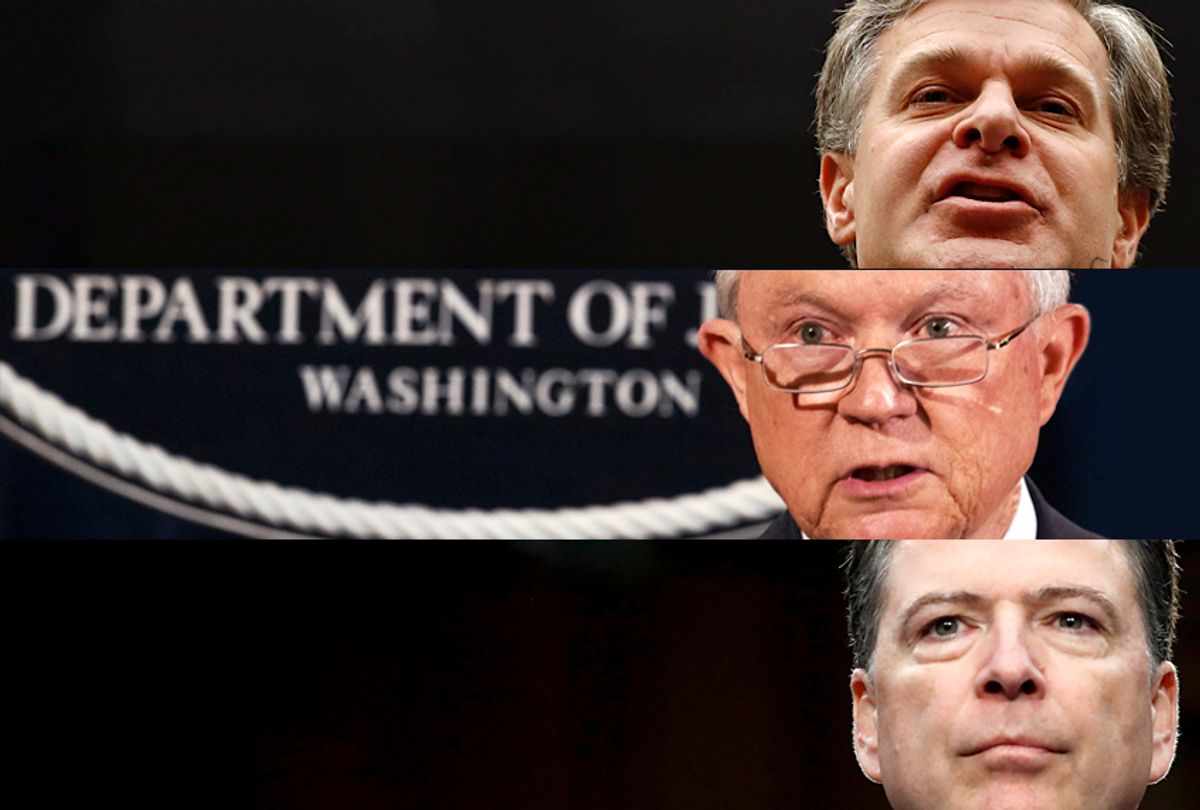 For those of us who follow the news through the mainstream media, Tuesday was a busy day for the Russia investigation. It started with Monday's late-breaking story from Axios, reporting that FBI Director Christopher Wray had threatened to quit after Attorney General Jeff Sessions exerted pressure on him to purge the agency of people the White House considers tainted by association with former director James Comey. Sessions even asked White House counsel Don McGahn what to do and was reportedly told to back off, since firing yet another FBI director wouldn't be a good look for the Trump administration.

The people the White House would like gone, notably FBI Deputy Director Andrew McCabe and former chief legal counsel James A. Baker, may be witnesses to Trump's suspected obstruction of justice. That makes this a bigger story because it piles on even more suspicion about that possible crime. Apparently, special counsel Robert Mueller is looking at more than just the Comey firing and the Michael Flynn coverup. He may be concerned that the president and his staff are still seeking to obstruct justice.

Look at what Trump said in public last November:

Trump has also been furiously defaming Comey, McCabe, Baker and others at the FBI on Twitter for months, which lends credibility to the assumption that Sessions is acting as the president's personal henchman and trying to purge the FBI of anyone who might be a witness in the obstruction case.

When asked to comment on the report that Wray had threatened to quit if Sessions didn't back off, the White House perfunctorily noted that the president respects the FBI's rank and file. Then the press office regurgitated a statement from December, word for word:

[Trump] believes politically-motivated senior leaders including former Director Comey and others he empowered have tainted the agency’s reputation for unbiased pursuit of justice. The president appointed Chris Wray because he is a man of true character and integrity and the right choice to clean up the misconduct at the highest levels of the FBI and give the rank and file confidence in their leadership.

The president later claimed that Wray never threatened to quit. And one cannot help but notice that of the five career FBI employees Comey told about his interactions with Trump in real time (McCabe, Baker, Chief of Staff James Rybicki, Associate Deputy Director David Bowdich and Carl Ghattas, who heads the national security branch), only the last two remain in the jobs they had in 2016. It would seem that the purge is proceeding apace.

The Washington Post also reported Tuesday evening that when McCabe had been acting FBI director after Comey's firing, Trump personally asked him who he had voted for in the 2016 election and then berated him to his face for his wife's politics. This startling breach of protocol indicates once again that Trump believes the Department of Justice and FBI are supposed to be his own personal Stasi. McCabe reportedly found the meeting "disturbing." I'll bet.

Considering all this, it's not surprising that according to The New York Times Sessions has already met with Mueller for several hours and that the White House is currently negotiating the terms of Mueller's likely interview with the president about the Comey and Flynn matters. Whether this means the whole investigation is winding up — or this is just one strand of it, and the Russian interference and money laundering aspects are unfolding on separate tracks — is unclear. But the attorney general and the president, for all their bickering over Sessions' failure to be Roy Cohn to Trump's Joe McCarthy, certainly seem to have worked closely together to obstruct this investigation, both before and after the Comey firing and all the way up until the present.

So Tuesday was a very busy day. Mueller runs a tight ship so it's quite likely this latest flurry of leaks is coming from the Department of Justice as a defensive response to the bizarre counter-narrative unfolding in the parallel universe of right-wing media and the GOP Congress. They have gone completely berserk.

House Intelligence Committee chair Rep. Devin Nunes, R-Calif., and the Tea Party fanatics who were weaned on the phony Benghazi investigations, have settled on a new crackpot theory: The FBI is full of Hillary Clinton supporters who stacked the deck in her favor for years and used all the powers of the "Deep State" to create this Russia hoax out of whole cloth. This time around, instead of emails, these folks are in a frenzy over some text messages showing that a couple of FBI employees had political opinions — which of course proves that Clinton should be in jail.

Nunes has apparently written a memo based on selectively chosen classified documents that allegedly show a misuse of the Foreign Intelligence Surveillance Court, one of his recently developed obsessions. (Recall that Nunes was caught running around in the middle of the night, conspiring with low-level White House kooks to make it look like the Obama administration had improperly "unmasked" Trump officials and lied to the country about it.) The Republican caucus has worked itself up into a frenzy over this memo, but nobody really knows what's in it -- not even the Justice Department, since Nunes won't share it with anyone who works there.

It gets crazier. Rush Limbaugh is now spouting the theory that the "Democrat Deep State" had a master plan to feed poor, gullible George W. Bush fake intelligence on Saddam Hussein's weapons of mass destruction in order to embarrass Republicans, weaken the military and destroy Bush's second term.

No wait, it gets even crazier than that:

That's a very excited U.S. senator saying something that is Alex Jones-level bonkers on national television. The "secret society" conspiracy is more fully fleshed out in this screed from Lou Dobbs:

One can imagine that sane people at the Department of Justice might just be getting a little bit concerned. We've had presidents investigated before. We've had them interfere with law enforcement and fire independent officials. But this level of flat-out lunacy from the party in power is something altogether different. Who knows where all this will end up? After all, Donald Trump became president. Anything can happen.