Trump really wanted a warm welcome in the UK: report

Out of fear of protests and an aggressive British press, Trump has privately told Theresa May he won't visit 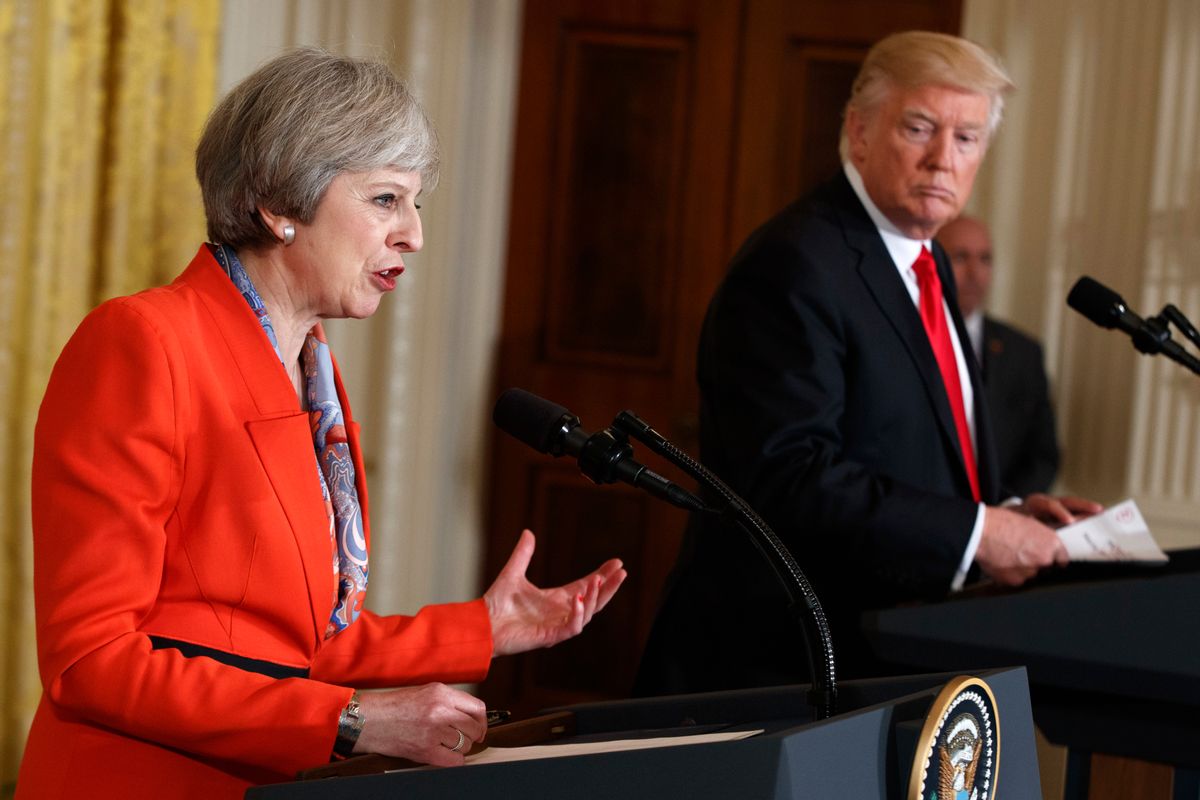 British Prime Minister Theresa May speaks during a news conference with President Donald Trump in the East Room of the White House in Washington, Friday, Jan. 27, 2017. (AP Photo/Evan Vucci) (AP)
--

For months, reports have circulated that Trump would not be taking up May's offer for a formal state visit, the highest honor a foreign leader can receive from the U.K., which would include a state banquet and a stay with Queen Elizabeth II at Buckingham Palace. But Trump has refused to attend out of fear of widespread protests and an aggressive British press.

During a phone conversation between the two world leaders last year, "Trump complained to May over the criticism he’d been getting in British newspapers," Bloomberg reported, based on conversations with current and former U.S. and U.K. officials. Trump wanted to be promised a warm welcome, but May told him there wasn't much she could do about it and to not worry about the way the British press operates.

"The relationship has taken some knocks," Peter Westmacott, a former British ambassador to the U.S., told Bloomberg. "But there is so much substance to the relationship—commercial, defense, intelligence, foreign policy, cyber, culture, language and shared values—that we all have an interest in ensuring that it remains strong."

Trump also canceled a visit to celebrate the official opening of the new U.S. embassy building next month, after claiming it was a "bad deal," and that it was sold for "peanuts."

Trump's relationship with May has staggered, as one British official said the two were complete opposites in character traits, despite his attempts to form a bond like former President Ronald Reagan and former Prime Minister Margaret Thatcher. "She’ll be my Maggie," Trump once told his aides, Bloomberg reported. Trump has touted the idea of Brexit, and wanted to make May's political rival, Nigel Farage — a lead Brexit campaigner and Trump supporter — the new British ambassador the the U.S.

May even had to correct Trump when he falsely asserted their were "no-go areas" in the U.K. because of violent Islamist extremists. The so-called "no-go zone" is a frequent, yet debunked, far-right talking point peddled by Infowars and used as a vehicle to push for harsher policies on terrorism and national security. The talking points were championed by Trump's appointed ambassador to the Netherlands, who recently refused to answer his assertions when questioned by Dutch reporters.

During other phone conversations between the two, May has often found it difficult to even get any words in. "Trump totally dominates the discussion, leaving the prime minister with five or ten seconds to speak before he interrupts and launches into another monologue," Bloomberg reported.

The two have also engaged in numerous petty public spats, largely as a result of Trump's behavior. The president told May over Twitter that she should "focus on the destructive Radical Islamic Terrorism that is taking place within the United Kingdom," last November, after he retweeted deliberately provocative anti-Muslim propaganda from a far-right U.K. organization. He has also been quick to meddle in terrorism affairs abroad, and after a London Tube bombing in September, Trump immediately suggested it was an act of terror. May said the tweets weren't "helpful."