Two twin boys — one ruled a US citizen, one ruled an undocumented immigrant 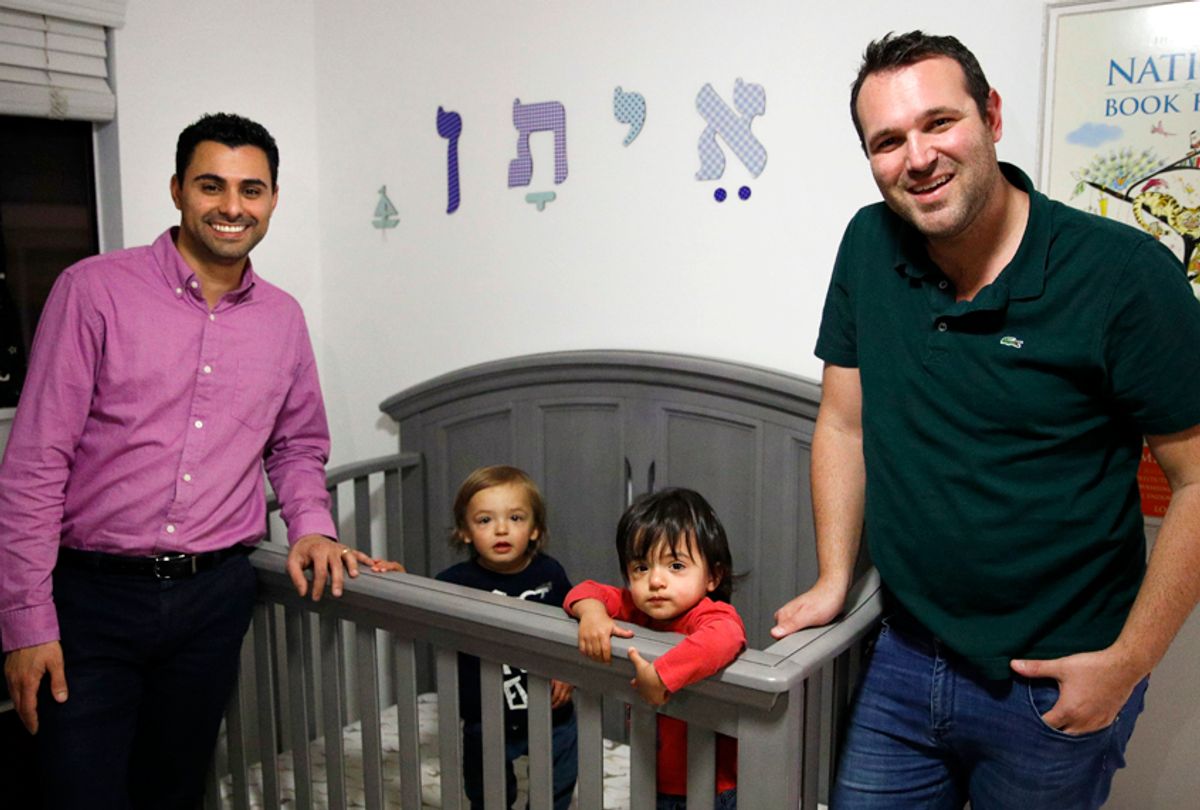 Ethan and Aiden Dvash-Banks were born minutes apart from the same surrogate mother and share the same two married fathers. Still, through an odd mix of laws, modern technology, circumstances and increasingly hostile federal policies, Aiden is a U.S. citizen and Ethan is an undocumented immigrant.

Now, Ethan and Aiden's parents are suing the U.S. State Department for denying one of their sons U.S. citizenship due to a policy they see as patently discriminatory to LGBT immigrant families.

The Guardian reported, "In a new federal lawsuit, the Los Angeles family is challenging a policy that they say discriminates against LGBT people by denying birthright citizenship to the children of gay couples based on blood relationships. The fathers, a US citizen and an Israeli citizen, are both listed on the birth certificates of the twins and legally are the exclusive parents of the boys."

"The message is that you’re not fully equal. Your family is less than other families," Andrew Dvash-Banks told the Guardian. "My son has been wronged here by the government. We’re fighting this to protect our son and our family."

Their case is not the only one and sheds light on the inequalities LGBT families, and especially LGBT immigrant families, face even after the U.S. Supreme court ruled that marriage equality was the law of the land in 2015.

The lawsuit was filed on behalf of the family by the not-for-profit Immigration Equality and claims the decision to deny Ethan citizenship was unconstitutional and anti-LGBT. "The government is wrongly citing a rule that is meant to require unwed fathers to prove blood relationships – not married gay parents, according to the complaint," the Guardian reported.

The group filed a similar lawsuit for a lesbian couple: American-born Allison Blixt and Italian-born Stefania Zaccari, whose two sons are seen differently by the U.S. government. In this case, one son was denied citizenship because he was carried by Zaccari.

"The state department is treating same-sex couples as if they were not married, and they are disenfranchising their children," Aaron C Morris, Immigration Equality executive director and the attorney for the Dvash-Banks family, told the Guardian. "Stripping a child of citizenship is one of the most heinous detriments the government could do to a child simply because his parents are gay, lesbian or bisexual."

Morris added that this phenomena of denying children of same-sex couples citizenship  depending on which parent biologically gave birth is something that began after — and not before — marriage equality was enacted and is becoming more and more widespread. He isn't sure how many families have been affected by this policy, but he says the government is applying the law the same way to every married gay couple if one of the spouses is foreign-born.

While this problem started during the Obama administration, certainly President Donald Trump's interest in cracking down on immigration regardless of age, time spent in the U.S. or the trauma it causes otherwise productive, happy American families may be a factor here.

Andrew and Elad were married in 2010 in Canada — as marrying in the U.S. was not then an option — and always planned to have children and raise them in California, where Andrew is from and his family still lives. In 2016, their twins were born in Canada, but because Ethan and Aiden each had a U.S.-born parent, the lawsuit says they both should be eligible for citizenship.

But even during the process to attain citizenship for their twins, they were treated unequally, the couple says. When they went to the U.S. consulate in Toronto, they claim they were asked invasive, probing questions about their sons' conception and the twins were forced to take DNA tests. In March, Andrew and Elad received a U.S. passport for Aiden and a denial of citizenship for Ethan.

"That moment was hard," Elad told the Guardian. "What the state department decision has done was to basically tear my family apart."

Ethan's undocumented status also means the family can't travel to Tel Aviv so the twins can meet Elad's parents and their grandparents.

But the family, who moved to California despite their unsettled status, hopes this lawsuit can not only help their own sons but every LGBT family like theirs who are subjected to government mistreatment as well. "We are going to make history," Elad told the Guardian.