Malcolm X: On stage, in person and human at last

A more personal take on the great man's life and death, "X: Or, Betty Shabazz v. The Nation" restores his humanity 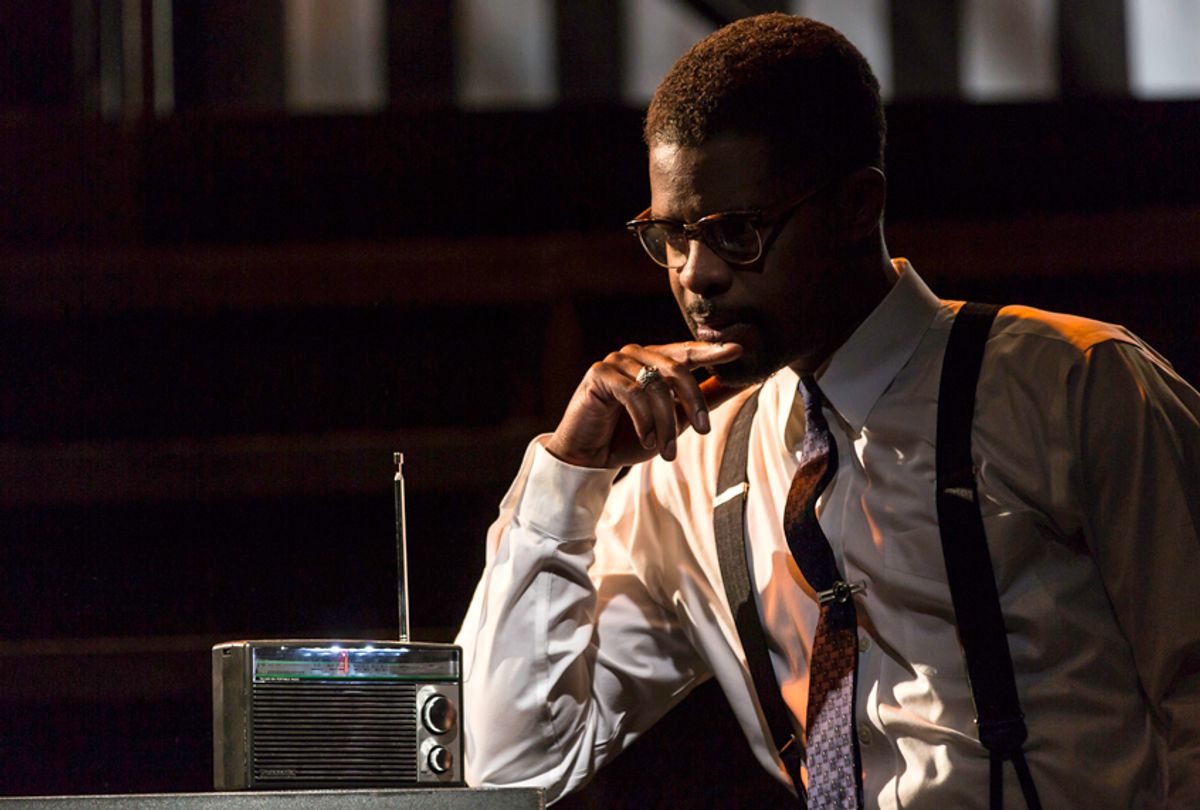 In The Acting Company's "X: Or, Betty Shabazz v. The Nation," currently running at the Theatre at St. Clement's in New York City, Malcolm X's widow seeks justice for the slain civil-rights icon by putting the Nation of Islam on trial.

In the play written by Marcus Gardley, there is a courtroom (the theater) a plaintiff (Shabazz) and a jury (the audience itself). But the justice that Shabazz receives at its end does not come in the form of a revelation about the identities of her husband's assassins, let alone their punishment. No, this trial offers something more vital: The restoration of Malcolm X's humanity.

"You hear about the big speeches, you hear about the controversy, you hear the highlights of the story," Obie Award winner Roslyn Ruff, who plays Betty Shabazz, says of the usual tropes present when resurrecting Malcolm X in book, on stage or on screen. She argues that "X" offers a different, more human portrait of the man, achieved by focusing not solely on the man himself, but also on his wife who knew him most intimately. "This woman," Ruff says of Shabazz, "was left was without a husband and these children were left without a father, and at the end of the day, first and foremost, that’s who he was."

The production, too, offers new avenues to the familiar figure. A fusion of comedy, drama, romance, history, music, singing, audience participation and even stepping, it's consistently innovative. There's also Shakespearean echoes on offer, thanks to a script influenced by The Bard's "Julius Caesar." But this engaging mix of artistic forms and theatrical conceits is secondary to the deeply human portrait of Malcolm X and Betty Shabazz.

Brilliantly played by Jimonn Cole, Gardley's take on Malcolm X moves away from the sweeping, simplistic generalizations usually pinned to the memory of the civil-rights leader: that he was violent, that he was angry, that he was militant. In this staging, an ever-growing Malcolm X, one unafraid to reexamine his principles, comes to life. That said, the portrait of Malcolm X as the doting father and loving husband is perhaps even more essential to the work. As Ruff tells Salon, it's an element of every person's life, but often glossed-over or forgotten in representations of "people of his ilk."

There's something real, something touchable about the love between Malcolm and Betty in "X". She speaks of his laughter, likening it to music in a particularly sharp and tender moment. Now, Malcolm X's more well-known work is not crowded out by such personal memories. Quite the opposite. Here, Gardley draws attention to the deep duality of the man and his message. He illustrates how Malcolm X was both proud and deeply loving, and perhaps most radically, reminds us that black men and civil rights leaders, "are capable of equal greatness," as he says.

Gardley tells Salon that during the script-writing process, his most significant discovery was "the love that [Malcolm X] had for his wife. They had a deep, abiding love that really drove him. That was really his number-one motivation for his life." In watching "X," one begins to understand why.

Throughout, the work not only demonstrates the ways in which Shabazz was the great man's personal support system, but the ways in which she was his moral and intellectual equal as well. As much as the play humanizes the colossal figure of Malcolm X, it restores Shabazz's voice and place in the historical narrative as well.

One of the most gut-wrenching lines in the play is said by one of the several secretaries of Elijah Muhammad who the Nation of Islam leader impregnated. "We’re women, secretaries, Negroes, and we’re Muslim," she says. "If there is a low on the totem pole, put us there or put us under the pole."

While Shabazz was never a secretary for the Nation, she's too often relegated to a footnote in Malcolm X's story; put under the pole, if you will. In "X," she is center stage, a fully realized being and something beyond a partner to a great man. Ruff's Shabazz is a regal caretaker and articulate warrior, one who tirelessly demands justice for her husband and family, even as she mourns him. She said it was Gardley's desire for and success in giving Shabazz a voice that piqued her interest. It is, unfortunately, something rarely afforded women in the movement.

To Gardley, Malcolm X is one of the more misremembered and undervalued American heroes. He sees Betty Shabazz in much the same way. In response, he's offered us a play that tells the story of the famous couple with rare understanding, nuance, appreciation and humanity, a work he and Ruff see as imminently relevant today.

"I feel like Malcolm X’s message has such a current resonance," Gardley said. "A lot of people are angry, and a lot of people feel like traditional protest is not working for them." Ruff added, "It’s going to be awhile before plays like this aren’t relevant."

Gardley describes the play as a "love letter to Malcolm X," but he also wants his audience to take their jobs seriously as jurors and, afterwards, as messengers. "The play really is a call to arms," he said. "The play asks you to take this story and to tell people who Malcolm X really was and by virtue of doing that, justice is being served." And, yes, you leave "X: Or, Betty Shabazz v. The Nation" changed, a bit transformed, much as Malcolm X himself was later in life as a leader, as a thinker, as el-Hajj Malik el-Shabazz.

Gardley says one of Malcolm X and Betty Shabazz' daughters, Ilyasah Shabazz, came to see the play recently. The first thing she said to him afterwards was that he managed to evoke something she had never seen before and told him, "thank you for giving my parents their true humanity." Gardley described it as "the biggest compliment of my life."