There are far more thoughtful history-inspired dramas to be had. But they're not on right now, are they? 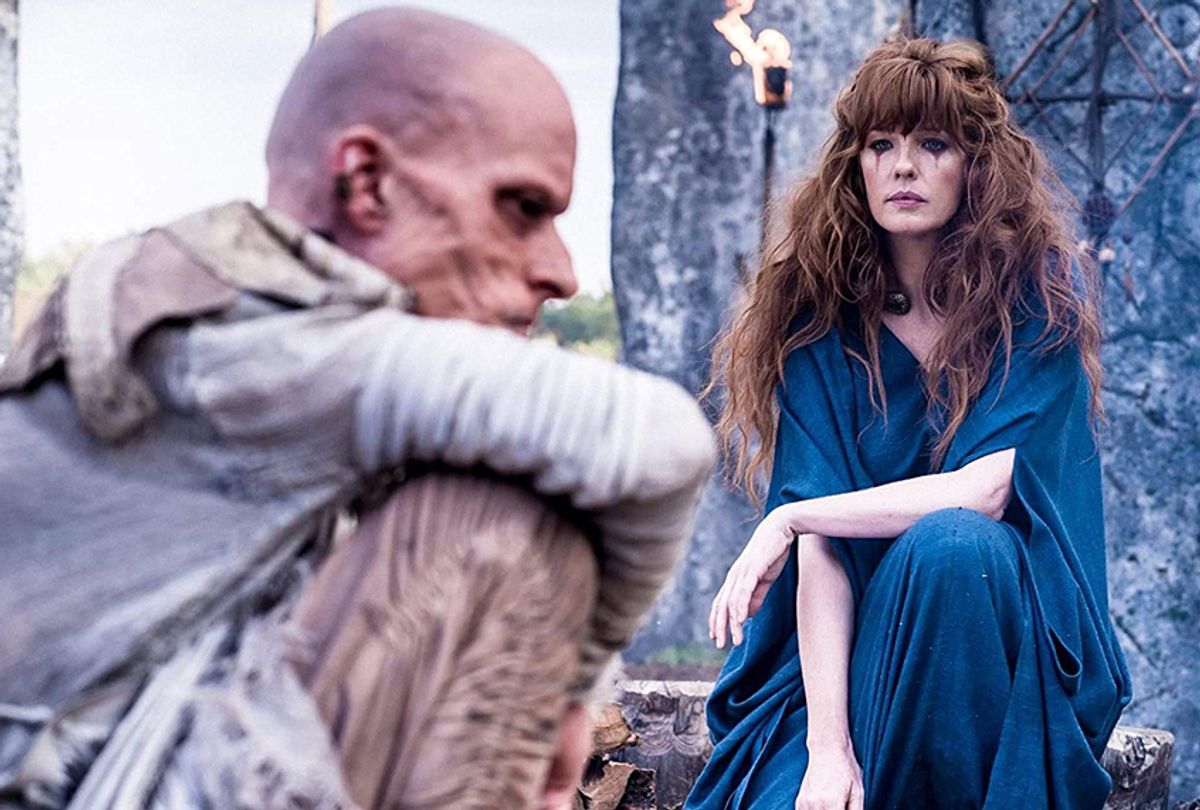 Frequently while watching “Britannia,” a kinda-sorta-historical drama made available to Amazon Prime subscribers on Friday, I found myself sighing forlornly and missing “Xena: Warrior Princess.”

There’s no reason to miss “Xena” these days. A reboot may be kicking around somewhere in development hell (although it’s officially dead at NBC, the network that recently floated the idea) but really, no fans of the original want to see anyone else but Lucy Lawless in that role and she has no reason to take up the chakram again anyway; her career has moved on swimmingly.

In lieu of Lawless, however, Amazon would like to offer Kelly Reilly as Kerra, formidable warrior princess of the Celts and possessor of a shiny mane of red hair. In AD 43, as Roman troops march across ancient Britain, Kerra wields a mean sword and defies the will of her father, King Pellanor (Ian McDiarmid), and that makes her sound a lot like Merida from “Brave” but that’s a story from a different time and a different company and, anyway, they’re both really great at archery.

What was I talking about? Oh yes – “Xena.” That syndicated action series had a lot to love about it, but among its greatest assets is that it didn’t take itself seriously in the least.

The problem with “Britannia” is that it looks like it wants people to take it seriously but presents itself in a way that makes that virtually impossible to do.

“Britannia,” a co-production of Sky and Amazon, exists because of other series, namely “Game of Thrones” and “Vikings” – actually, it might as well be “Vikings” tossed into a blender with “Game of Thrones,” along with a few drops of “Monty Python’s Flying Circus” that got in there by accident, though the host hopes we don’t notice.

The first five of the nine episodes provided for review also have echoes of “Spartacus,” and “Rome” slopped with a sauce of graphic novel-style drama. That’s not the worst a person can say about a series; millions enjoy such a presentation on “The Walking Dead,” and I would be mentioning that show even if David Morrissey, most familiar to American audiences as one of zombieland's top psychopaths, weren’t co-starring in “Britannia.”

Here he plays the Roman general Aulus Plautius, your standard-issue tightly wound imperial officer strutting around in great furs and motivating his troops with severed heads. Don’t hate, though; Plautius needs all the help he can get in this strange land of magic and mud-slicked druids who seem to have some knowledge of augury, the ways of the underworld, and a large supply of dank weed and hallucinogens.

In this ancient land imagined by Jez Butterworth, Tom Butterworth and James Richardson, Plautius brings 20,000 Roman soldiers to the land to finish the job Caesar was too chicken to complete some nine decades earlier, scared off by the witchy freakishness of the druids and Celtic tribes whose leaders, many of them women, love to pepper conversation with F-bombs. Zoë Wanamaker, in her role as Queen Antedia, is a particularly delightful vulgarian who embroiders her parleys with enough profanity as to assert herself while retaining an air of elegance. (Plus, her eye shadow game is on point; I mean, she really has the smoky application down pat.)

Think of the Celts as Vikings with better hair products, makeup skills and access to vivid dyes and better jewelry craftspeople. Sadly, they’re still insufficiently educated in the ways of oral hygiene and bereft of soap, but that’s OK. Their purity of soul and connection to Earth is their greatest selling point. Plus, there’s a wanderer (Nikolaj Lie Kaas) skilled in the ways of hypnosis and some other nifty magical hooey, which is handy when he encounters a young girl (Eleanor Worthington Cox) forced to flee into the woods when Roman forces interrupt a very serious gathering resembling a bonfire rave at Burning Man.

With the exception of the lighthearted adventures of Not-the-Hound and Arya Lite, the “Britannia” cast plays it terribly straight for the most part, and fortunately that doesn’t get in the way of its bizarre swagger (bookended, one should add, by the usage of Donovan’s “Hurdy Gurdy Man” in each episode’s opening and closing titles).

But “Britannia” is an action period piece structured around classic tropes: the wandering wizard, the underestimated warrior princess, the ambitious scheming wife of a lesser leader, the immovable forces of a ruthless empire.  It’s a good time but nothing you haven’t already seen in any number of dramas, particularly “Vikings.”

Maybe its qualification as a fun midwinter distraction is all a person needs. That said, “Britannia” does miss some golden opportunities in its derivation. The story opens by pitting Romans against Celts, the former intent on bringing Celtic lands and the riches therein, mainly tin deposits, under the empire’s control. By the end of the second episode, however, the mission of the Roman guard’s top man is whittled down to an intimate aim that serves the empire’s agenda as well as his own, which is to destroy the Celts by obliterating their religion.

“Vikings” is currently the only series on television that thoughtfully explores the ways that religions now considered pagan shaped ancient cultures and conflicted with Christianity. The way it manifests in “Britannia” is through black-eyed druids, led by a manipulative skeletal leader played by Mackenzie Crook. And they’re mostly there to toss a wrench into the plans of Romans and Celts alike.

“Britannia” gets a few points for acknowledging in a sideways fashion that people of color existed in ancient times by featuring Roman soldiers of African and Asian descent in its ranks, even diving into a smidgen of backstory for a couple of them. Before you get your hopes up too much, remember that Caesar turned back for good reason and, well, consider that previous observation about the series’ lazy affection for aping tropes.

“Xena” is long gone, with “Spartacus” and “Rome” walking beside it in television’s version of the afterlife.  “Game of Thrones” won’t be back until 2019, and this week “Vikings” entered its midseason hiatus. “Britannia,” then, may be adequate to soothe whatever itch is left by the departure of these other series, temporary or permanent. A full conquest, however, may be beyond its reach.