After their sleazy affair with Trump, how can Christian conservatives still pretend to be all about morality? 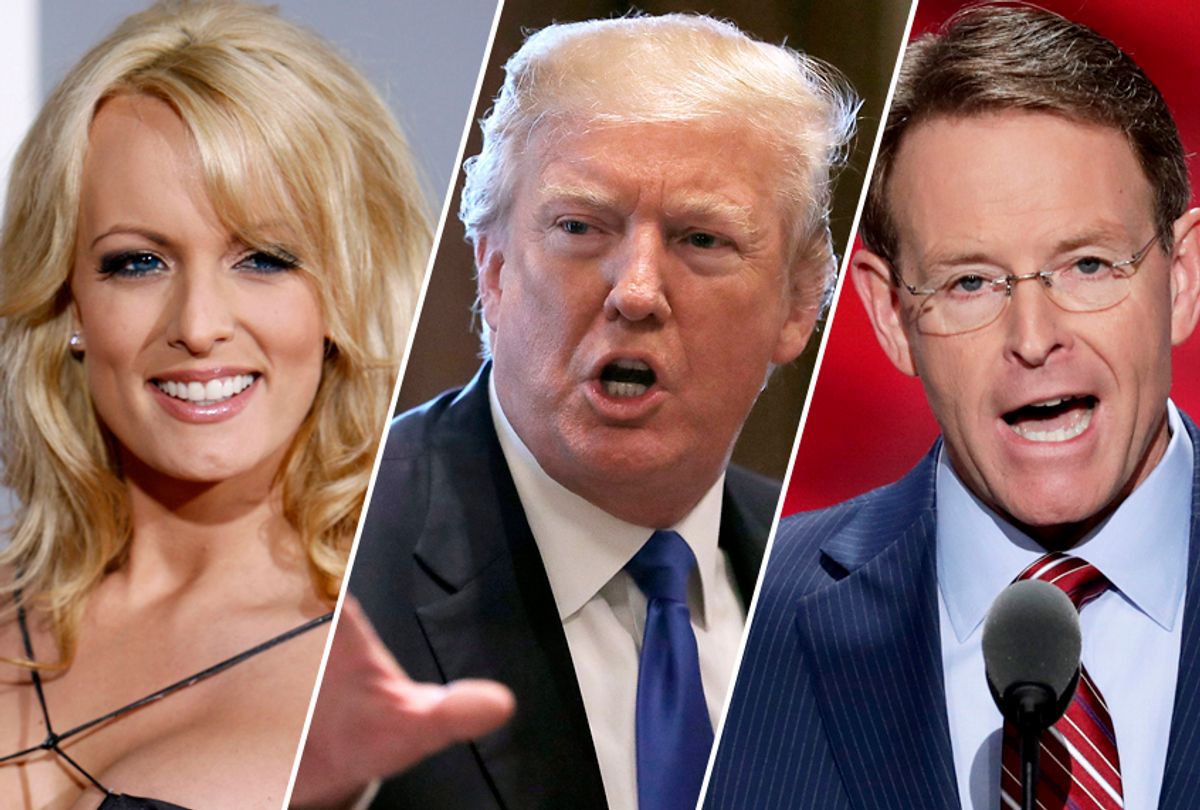 Donald Trump is a man without any discernible redeeming qualities, but nonetheless I'm grateful for one thing he's done, without really trying: He has exposed the true nature of the Christian right. For more than a decade now, I've been diligently writing and researching, trying to build the case that the religious right is not motivated by moral values, but by hatred of women and LGBT people — and that many of them are white supremacists, to boot. And then here comes Trump, bragging about how he likes to "grab them by the pussy" and spreading racist propaganda, and sweeps up 80 percent of the white evangelical vote, more than true-believer George W. Bush got in 2004.

Prior to Trump, I was routinely mansplained at by naive liberals who insisted that religious conservatives were acting out of genuine faith, not malice. That doesn't happen any longer, and in these rough times, I try to be grateful for small favors.

Perkins offered an explanation for why so many religious conservatives eagerly support Trump: "I think they are finally glad that there’s somebody on the playground that is willing to punch the bully."

By "the bully," of course, Perkins means women and LGBT people who would like to make their own decisions about their own bodies and own lives. How he is being "bullied" by being asked to leave other people alone to live their lives as they see fit remains a mystery.

Those comments went viral, of course, because the word "mulligan" is so evocative and because it seemed that Perkins was admitting what those on the religious right have long denied: They don't care about sexual morality, per se. That was just the cover story for the real concern of Christian conservatives, which was always to assert the dominance of straight white men over everyone else, to push LGBT people back into the closet and, perhaps most of all, to force women into subservient roles. As long as Trump's adultery and even his assaults adhered to an ideology where men were in charge and women were submissive, he would be loved by the Christian right.

Now Perkins is getting whiny about the delight his opponents take in watching his mask slip. On Wednesday's "Washington Watch" show, Perkins denied that evangelicals are indifferent to Trump's routine adultery. He said that the president "has surrounded himself with evangelicals and pledged to do differently," and that Trump would have the allegiance of the religious right "as long as he continues to be the most pro-life, pro-family president" and "continues to walk the straight and narrow with the right influence."

Perkins would like his listeners to imagine a tearful Trump who has prayerfully asked God for forgiveness and is striving mightily to walk the righteous path. But to imply that such a person exists is a flat-out lie. Trump has never vowed publicly to avoid adultery in the future; when asked on the campaign trail if he had ever sought God's forgiveness, he seemed confused by the question and said no.

Instead of exhausting themselves by keeping up a pretense no one believes anymore, perhaps religious conservatives should model themselves after Courtland Sykes, a Republican candidate for the U.S. Senate in Missouri. Sykes is an alt-right-style outsider who has familiar Breitbart-flavored obsessions with guns and immigrants, and who seems indifferent to putting a Jesus-y spin on his ridiculous opinions. He achieved some viral fame this week after his statement on women's rights was published on Facebook.

“I want to come home to a home cooked dinner every night at six," he wrote, explaining that his definition of "women's rights" was the "right" (i.e., duty) to be "traditional homemakers and family wives" rather than "career obsessed banshees who forgo home life and children and the happiness of family to become nail-biting manophobic hell-bent feminist she devils."

Sykes is not seen as the frontrunner in Missouri's Republican Senate primary, but one must admit that his rhetorical stylings seem well-suited to the Trump era. Forget the elaborate charade put on by the religious right about faith and the Bible and "family values." Just admit out loud that you prefer a system where men get to be people with hopes and dreams and women are relegated to the role of flesh-bound cooking appliances. Who can argue with wanting dinner on the table at night promptly at 6 p.m., without having to plan it, shop for it or cook it? Even women would like that -- but what women want has always been immaterial to religious conservatives.

Alas, it's unlikely that after a lifetime of disingenuousness Tony Perkins and other leaders of the Christian right will admit that their entire crusade was never about "values," but mostly about keeping the boot firmly on female necks. That's OK: Donald Trump will no doubt continue reminding the country that he's a godless lech, giving us regular reminders of the bottomless bad faith of the religious hypocrites who continue to support him.